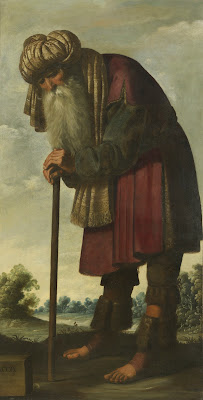 "And Jacob called unto his sons, and said,
Gather yourselves together, that I may tell you
that which shall befall you in the last days.

Gather yourselves together, and hear, ye
sons of Jacob; and hearken unto Israel
your father."
Genesis 49: 1-2  (King James Version)

Thus begun Jacob's last words to his sons as related in the Old Testament (Genesis 49).  There were twelve, begot by the patriarch's two wives and two concubines.  From them came the tribes of Israel. Jacob blessed his children and told them about their futures.  Shortly after that he died. Christians identify Jacob as the prefiguration of Christ and his twelve sons as the ancestors of the apostles.

Although Jacob and his sons are important biblical figures, their visual representations are rare.  There are only three known painting cycles: a magnificent series by the Spanish artist Francisco de Zurbarán (1598 - 1664) in England and two related ones in Lima, Peru and Puebla, Mexico. The Zurbarán paintings are now on view in the exhibition Zurbarán's Jacob and His Twelve Sons: Paintings from Auckland Castle, in the East Gallery of the Frick Collection.

Twelve of the paintings are from Auckland Castle, County Durham, England, the residence for more than 900 years of the Prince Bishops of Durham.  The paintings hung in the castle for 250 years and only the temporary closing of the Bishop's Palace for renovations made this presentation possible.  One canvas, Benjamin, part of the original series, is on loan from Grimsthorpe Castle in Bourne, Lincolnshire, England.  This is the first time all these paintings have come to the United States and the first time any complete Zurbarán series is shown here.

Zurbarán was one of the most celebrated artists in Spain with a large workshop in Seville where he spent most of his career.  He produced a variety of work for ecclesiastical institutions all over Spain and its colonies.  He was noted for his figurative compositions and sets of paintings as well as still lifes.  He also assisted Diego Velázquez (1599 - 1650), court painter to the King Philip IV of Spain, on a royal commission.

The Jacob cycle was an enormous undertaking - thirteen larger-than-life-size figures filling  six-and-a-half foot canvases, using about ninety feet of canvas in total.  Each figure was individualized and designed to communicate a particular destiny.  Zurbarán employed a team for the project since it was much too large for one artist to complete.  The work was executed between 1640 and 1645.

No extant document records the contract for the cycle which was too unusual for the artist to create for the general market.  Scholars conjecture that it was commissioned by someone in the Spanish colonies. They make this assumption for several reasons.  There was no precedent for a series like this in Spain and the artist had never produced one.  The indigenous people of the New World were thought to have descended from the Lost Tribes of Israel.  Consequently such a theme as Jacob and his sons would make sense.  Also, during this period, Zurbarán had turned increasingly to the Americas for clients. Seville experienced an economic downturn and artists were seeking patronage elsewhere.  Furthermore, the painter’s style was going out of favor.  It would be superseded by the preference for the softer, lighter manner as seen in the work by the younger artist Bartolomé Esteban Murillo (1617 - 1682).

Some suggest the paintings may have been meant for a Jewish client - there were an estimated 30,000 Jews living in the Americas.  Others however propose that because the cycle's size required expansive installation space, it was probably bound for a monastery or church. The figures appear as if in a processional which was a popular religious activity in Spain as well as the colonies.  Whoever the intended owner, the series was never sent.

For many of the figures' poses, costumes and attributes, Zurbarán turned to sixteenth- and seventeenth-century northern European prints especially the series of engravings The Twelve Sons of Jacob by Jacques de Gheyn II after designs by Karel van Mander I.* Some seventy prints were left in the artist's studio at his death in 1664 including the set by Jacques de Gheyn II.

Although elements of the paintings may have originated in other artworks, each figure's distinct facial characteristics were most likely based on life studies, perhaps the artist's studio assistants. 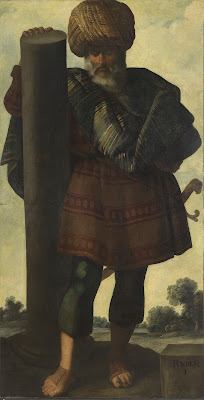 Unstable as water, thou shalt not excel; because thou wentest up to thy father's bed; then defiledst thou it: he went up to my couch."
Genesis 49: 3-4  (King James Version)

Reuben is represented in a frontal view as a mature, gray-bearded man whose right hand rests on a column, the traditional symbol of courage and strength.    His left arm akimbo that is hand on hip and elbow outward-bowed, connotes assertiveness.  Yet, Reuben's eyes are downcast, his expression solemn.  He conveys sadness, an outcome of his misconduct and poor fate. Reuben, as Jacob's first born, had a high ranking in the family, but his tribe would not do well.   He had committed a transgression.  He had slept with one of his father's concubines. 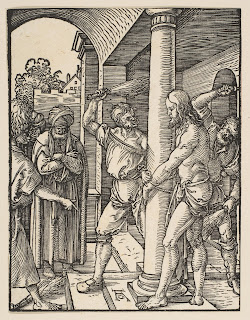 For Reuben, Zurbarán borrowed the turban and downward tilted head from the standing figure of Pontius Pilate in Albrecht Dürer's woodcut, The Flagellation, from The Small Passion.  The column may also be derived from this print. 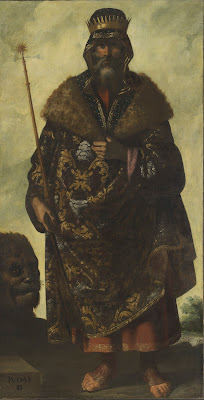 Jacob compares his son Judah to "a lion's whelp."  He shall have a "scepter" and "ruler's staff."  Although the fourth son, Judah assumes a leadership role because of the misconduct of his three older siblings. Zurbarán portrays him as a king in sumptuous garb, a scepter in his right hand and a crown on his head.  A lion's head, alluding to his father's comparison, appears at the painting's left side.   He is an imposing figure looking straight ahead with a sense of determination. 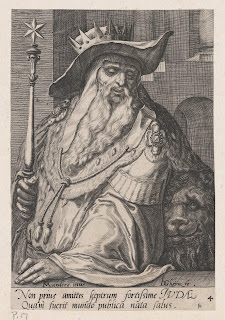 For this representation, the artist followed the description of Judah in Genesis as well as turning for inspiration to de Gheyn's Judah engraving for the scepter, crown and lion. 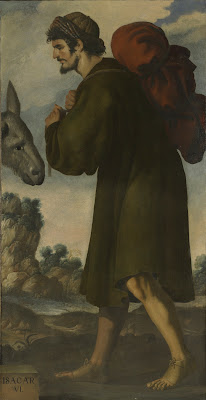 Issachar is characterized as a "strong donkey" with a body bowed by his burden.  He is the most poorly dressed of the brothers which befits his laborer's life.  Gnarled toes and dirty toenails attest to hard and rough manual labor.  His donkey and knapsack are also sourced from the de Gheyn print while Issachar's profile view and left arm positioned across his body is taken from Martin Schongauer's print of the apostle St. Matthias. 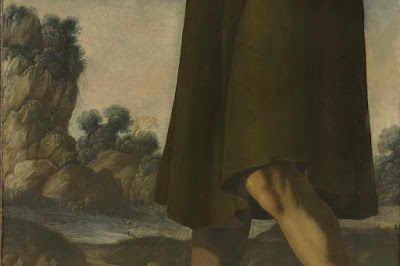 Recent technical analysis suggests that the landscapes in the Issachar and Asher paintings were likely made by Zurbarán himself to serve his assistants as models for backgrounds in the other paintings of the series.  All the paintings have the same low horizon line and the figures could be seen as standing before a panorama of a rural landscape under a cloudy sky, an effect similar to triptychs in which the background continues from panel to panel. 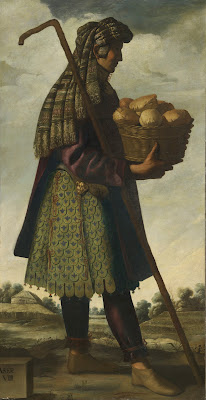 In Genesis 49.20 (KJV) Jacob says, "Out of Asher his bread shall be fat, and he shall yield royal dainties."  Asher is a well-to-do farmer. His rich clothing attest to his status and adds to the decorative quality of the painting.  The overfull bread basket is a beautiful demonstration of Zurbarán's command of still life.

Zurbarán has a singular skill in depicting ornate garments.  He was the son of a haberdasher and must have been used to seeing assorted fabrics and fine thread.  In addition, Seville was the largest city in Spain in the seventeenth-century and its busiest port.  For most of the century it dominated trade with Spain's colonies. Middle Eastern merchants and New World goods coming off ships would be a daily experience for the artist and expose him to exotic dress and imported textiles which he incorporated in his work.   For example, the striped pants of Zebulun in the Jacob series is linked to fabrics from the Americas. 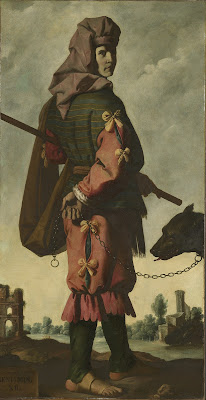 Benjamin is represented as a handsome youth in rather foppish clothing.  He is the the youngest son, very much loved by Jacob. In Genesis he is compared to a "ravenous wolf" alluding to the fierceness of his tribe. The wolf head and chain is again another motif borrowed from the de Gheyn print.  A freshness and sharpness sets this canvas apart from the others.

After the artist's death the cycle's whereabouts were lost.  In the eighteenth century the paintings turned up again in England.  They were passed on to a director of the South Seas Company who lost his fortune in the South Sea Bubble.  A Jewish merchant purchased them at auction in the 1720s.  In 1756 all but one of the paintings were bought by Bishop Richard Trevor of Auckland Castle, County Durham. Bishop Trevor wanted to buy all the works which were auctioned individually but was outbid for the Benjamin.  This painting, with its romantic aura, would have appealed more than the others to eighteenth-century sensibilities. Consider the portraits of Sir Joshua Reynolds (1723 - 1792) and Thomas Gainsborough (1727 - 1788). Benjamin's contemporary appeal may have accounted for the run up in its price.  Bishop Trevor at once had an exact copy made to complete the set.

Some words about the Bishops of Durham:  they were Prince Bishops, leading churchmen of England with secular authority and the responsibility of protecting England’s Northern frontier.   They were members of the House of Lords and were  politically powerful.

Bishop Trevor was an advocate of the rights for those disenfranchised especially the Jews who had been invited back to England by Oliver Cromwell a hundred years earlier but were not given any rights.  The Bishop supported them and organized on their behalf.  In 1753, under his guidance, parliament passed the Jewish Naturalization Act.  It was overturned the following year. 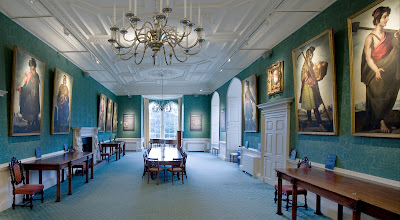 Zurbarán and other works on display in the Long Dining Room at Auckland Castle
© The Auckland Project/Zurbarán Trust
Photo credit: photo Colin Davison
Courtesy of The Frick Collection

Thwarted in his emancipation endeavor, the Bishop  purchased the painting cycle with the intention of shaming British leaders.  He had Auckland Castle's State Dining Room specifically redesigned for the series so when he met with important statesmen, they would be under the gaze of the thirteen Jews.  As such, the cycle became a lesson in acceptance and tolerance.  Jacob accepted his sons for what they were no matter what their actions.  Bishop Trevor similarly accepted all people no matter what their beliefs.

Visitors may be perplexed by a realistically rendered block with a Roman numeral appearing in the lower left or right corner of each canvas.  The number corresponds to the order each son is mentioned in the Bible which is different from their birth order.  At the Frick, as in the Bishop's dining room, the series is installed as intended in the Biblical sequence.

Please, go see these splendid paintings while remembering the tolerance and acceptance by Jacob and, echoed by Bishop Trevor.

First Fridays:
On the first Friday of the month
(except September and January)
the museum is open until 9 p.m.


Posted by ArtWithHillary at 2:58 PM