The Many Manifestations of Female Buddhas 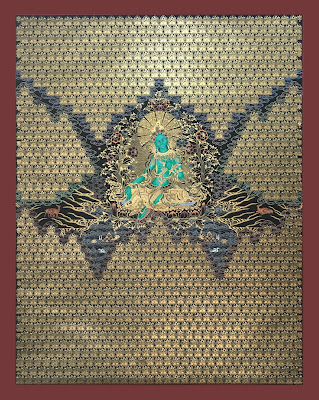 
Female buddhas and bodhisattvas, feminine deities, yoginis (female yogis), women practitioners and teachers of Buddhism and more fill a hall and gallery walls at the Tibet House US in the exhibition Divine Feminine: New Masterpieces from Nepal.  These divine beings appear in fifty thangka paintings by the master painter Karsang Lama who is designated a national treasure in Nepal and considered Katmandu's top thangka painter.  The paintings' powerful feminine icons are meant to inspire and guide worshippers in the practice of Buddhism.

Thangka paintings are scroll paintings in natural colors on prepared cotton cloth.  They depict Buddhist figures and mandalas, complex geometric configurations representing the universe.  Every detail of the painting has meaning.

The art form evolved in India some fifteen hundred years ago, spread to Nepal and then to Tibet. The artist first forms a visualization of what is to be represented.  If the work is complex, the artist draws what he wants to paint on transparent paper, then transfers his outline to canvas. For simple thangkas, the picture is created directly on the cloth.  The entire design is done freehand except for rectilinear and circular forms when a ruler or compass is employed. After the outline is completed, paint is applied. At this stage, there is no erasing or redoing. Colors are prepared by mixing powders derived from minerals and plants with water and animal glue made from the leather of yak that allows for the paint to adhere to the fabric surface. 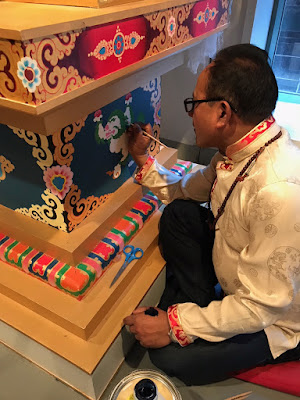 Master painter Karsang Lama completing a lion figure left unfinished
by another artist on the base of a 21st century work commissioned by  Tibet House US,
Photo:  Margaret AuYeung, March 22, 2018, Tibet House US

The blending of glue and pigment in traditional style thangka painting is done on the back of the artist's hand which acts as a palette.  Very thin paint brushes are used and paint is best described as dabbed on the surface in layers.  The work must follow a prescribed set of rules as to content, symbols, color, proportion and measurements. The art form requires tremendous mental discipline.  Training involves the study of meditative religious practice besides art.  To become a master painter could take some thirty years or more.

The world renowned thangka painter Karsang Lama is the seventh generation painter from his family. His ancestors were holy monks who migrated from Tibet to northern Nepal and founded a monastery and a foundation where Buddhism and painting were taught.  Karsang Lama studied for 10 years, from age 5 to 15, at a monastery that his great-great-grandfather established.

A word about Buddhism:  Buddhism is a religion many westerners find baffling.  It teaches that the way for beings to end the suffering in life is enlightenment achieved through wisdom, virtue and concentration. Like western religions, Buddhism has many schools or branches each with their own important figures, visual symbols and mythology.  Tibetan Buddhism, for example, has over 1,000 deities.  Visual representations are aids in understanding for the initiated and uninitiated. As such, the thangkas on view at Tibet House US offer much for those who know and those who seek to know. 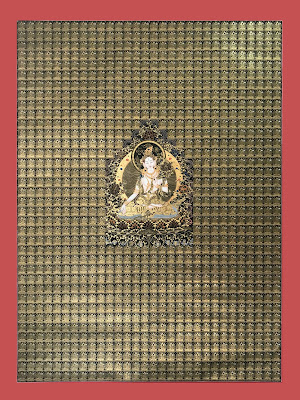 Eleven of the thangkas on view depict the goddess Tara, a female buddha and bodhisattva.  She is regarded as the mother of all buddhas and savior of sentient beings from worldly miseries.  If confused about the term buddha, it does not necessarily refer to the historic Buddha, Siddhartha Gautama, but simply means enlightened one.  There were many buddhas before Siddhartha and there are and will be many buddhas thereafter. Bodhisattva is an enlightened being who is able to enter paradise, nirvana, but chose to stay behind to help others reach nirvana and escape from endless suffering.

There are various legends associated with Tara's origins and various forms she takes like the Green Tara and White Tara.  In Buddhist iconography, deities have specific colors to indicate their nature and functions.  As the Green Tara, she is the goddess of action and activity. She is slender and graceful and  thought of as the original Tara.  Her pose with right leg extended indicates she can spring into action to help those in trouble.

The White Tara is associated with purity, truth and knowledge. She has seven eyes, one in each palm and on each foot, one in the center of her forehead and her two normal human eyes.  With these she is able to see all those in need.

Tara is portrayed as a bodhisattva adorned with necklaces, bracelets, earrings and a crown.  She has not given everything away since she remains connected to this world.  Buddhas, in contrast, are represented in a monk's plain robe, usually covering only one shoulder. For buddhas, all earthly goods have been relinquished.

Hand gestures, called mudras, and numbers, like everything in a thangka painting, have  significance.  For example, the right hand of the White and Green Tara makes the sign  for "charity."  1000 as in 1000 Green Tara and 1000 White Tara, indicates infinity and the path to nirvana.  If the digits are added one by one, 1+0+0+0, they equal one which refers to truth and the one way leading to enlightenment.  The goddess has been through the path and is guiding worshippers towards the same.  The number 108, as in two works in the exhibit 108 Green Tara and 108 Buddha, when added digit by digit equals 9.  This is the number of energy and the 9 planets of  the universe that give off great power. The combination of 1 and 9 makes the human body energetic and full of knowledge. 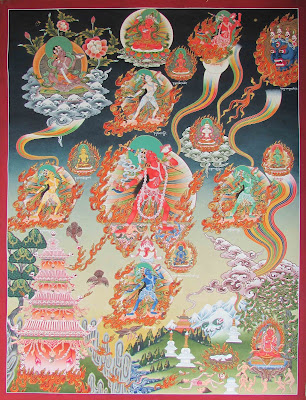 Vajrayogini is a tantric female deity who can be human or non-human and can fly through the sky. Tantra means the channeling of energies within the body to achieve enlightenment.  It is believed that yogis developed Tantra.

Vajrayogini has supernatural wisdom and power that can help eliminate obstacles and obstructions. She also has the ability to bestow omniscience, complete understanding and enlightenment.  She is portrayed with many ornaments covering her nude body including a necklace and crown of skulls.  In her left hand she holds a blood filled skullcap. She stands in the center of the fire of wisdom trampling on her own emanations.  Her depiction is both erotic and fierce.  Many of her attributes refer to tantric philosophy and rituals.  Skulls, for instance, are associated with charnel grounds, above ground crematory and cemetery areas, considered the home ground for tantric practitioners.  There are all sorts of things going on in this thangka. Wall labels assist the visitors' understanding but leave much unexplained.  This may have the effect of wanting to know more.  Perhaps this is one of the artist's intentions:    wanting to know more is wanting to be enlightened. 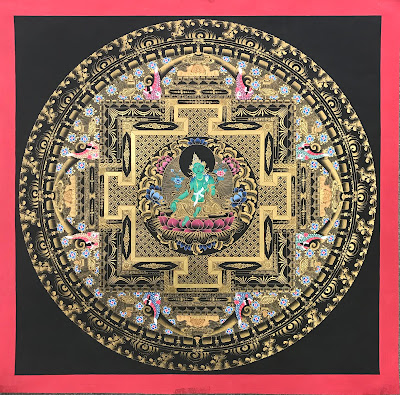 As an instrument of mediation, the mandala is the focus of the practitioner's mind, mentally entering the image through the three or four outer circles proceeding towards the center.  While the geometrical mandala represents the cosmic universe, the land of the buddha, the circles surrounding it symbolize such things as fire which the consciousness must pass through to burn ignorance and darkness. 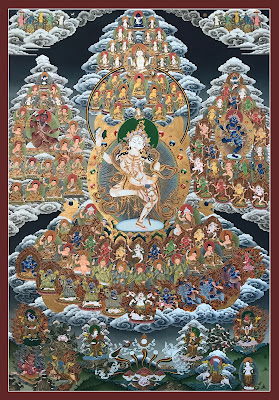 The masterpiece of the exhibition is Karsang Lama's painting of Machig Lapdron. She was an 11th-century Tibetan tantric Buddhist teacher and yogini and is the most famous woman of wisdom in Tibet.   She is depicted with a crown of five skulls and covered with gold jewelry. Her dancing posture with right leg raised and left bent as if in motion attest to her   role as the representative of enlightened female energy.  The main figures to her left and right are her two sons and, above her, bodhisattva Avaloketeshwara, the earthly manifestation of Buddha Amitabha who is the buddha of longevity.  All around the main figures are teachers, gurus, siddhas (holy men), deities, bodhisattvas and buddhas. 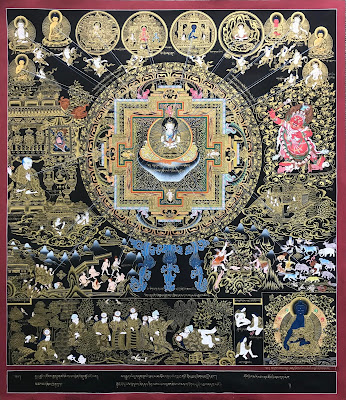 The exhibit also includes images of male buddhas and bodhisattvas, a variety of different types of mandalas, scenes of the life of the buddha, illustrious religious leaders and yogis. There are even illustrations of medical plates from a medieval medical chart.

For followers of Buddhism, these thangkas will have deep spiritual meanings. Their imagery and beauty, however, will appeal to everyone.