Cow Currency As A System Of Pricing 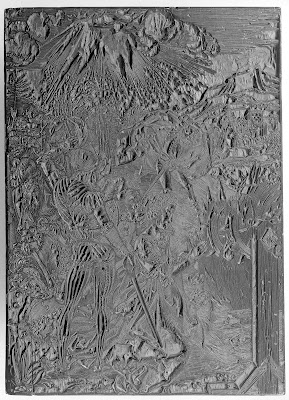 Albrecht Dürer (1471 - 1528), The Martyrdom of Saint Catherine, ca. 1498,
black ink on carved pearwood,
15 1/2 × 11 1/8 × 1 in. (39.4 × 28.3 × 2.6 cm)*
Metropolitan Museum of Art, New York
Photo:  The Metropolitan Museum of Art Web site
During the northern Renaissance a carved wood printing block by the renowned 15th/ 16th-century German artist Albrecht Dürer, and a fake sculptural relief attributed to him were more expensive than one of his original prints.  What caused these differences in price and other questions concerning the complexity of valuation are addressed in the Metropolitan Museum of Art's intriguing exhibition Relative Values:  The Cost of Art in the Northern Renaissance.

Many of the show's 63 objects, all but one from the museum's collections, have never been out of storage and most will be new to visitors.  Some have not been seen since being acquired in 1917. 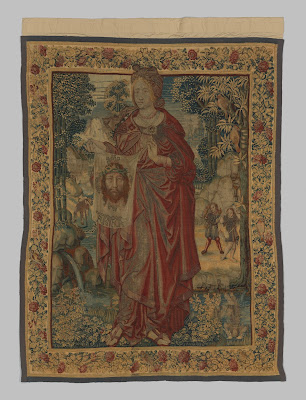 The show's curator, Elizabeth Cleland, Associate Curator, Department of European Sculpture and Decorative Arts, a specialist in tapestries, had long sought to inform the public about the prestige and value of tapestries when they were new.  From the late 14th century through the early 18th century, tapestries far surpassed the cost and significance of paintings.  Today this is reversed.

Since pricing is meaningful only relative to other costs, Ms. Cleland set about researching the comparison prices of objects during the northern Renaissance.  Her archival studies focused on 16th-century contracts, guild prices, household inventories, evaluations of royal collections and other financial records.  It was difficult, however, to translate relative purchasing power.  There were numerous currencies in use and two monetary bases, gold and silver, used throughout the period.  To clarify valuations, Ms. Cleland first converted the average price of the exhibit's objects into their silver equivalent.  But she felt prices in silver weight would not be meaningful and effective to the viewers.  Instead, she came up with a unique idea. 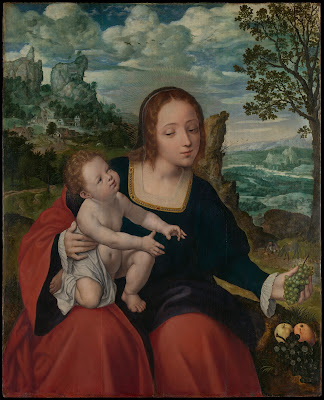 In the northern Renaissance, milking cows were an important resource throughout Europe.  Their prices held steady at 175 grams of silver per cow.  Ms. Cleland thought objects could be better expressed in the form of "cow" currency.   As such, in the 16th century a door tapestry of St. Veronica, ca. 1525, would be valued at 52 cows which was more than ten times the contemporaneous price of a painting about the same size.  Thus, The Rest on the Flight into Egypt, ca. 1540, could be had at 5 cows.  Ms. Cleland also calculated what other things one cow could buy: for example, the wages for 59 days of an unskilled laborer in London and Antwerp or, 35 days of a skilled worker in the same market.

Why were tapestries so highly valued in the 16th century?   The range of values depends on many things, but can be divided into intrinsic and extrinsic features.  The materials used to make the object may be quite costly or rare and the work involved in making the article may take a long time.  Artistic value, geographic distance from the market place or a belief in the object's magic or religious power also influence price. Tapestries were made of wool, silk and often thread wrapped in strips of silver or gold.  The tapestries were usually enormous, covering wall to wall and ceiling to floor and came in sets of five to up to ten different tapestries. They depicted narrative scenes of historical, religious or allegorical nature.

Making tapestries took months and involved highly trained artisans such as weavers, designers and painters.  Only the wealthiest could afford them which meant generally royalty. They were used to cover drafty and dark palace rooms, offering warmth and color.  Those threaded with metal would glimmer in candlelight. They were not intended for permanent display and could be rolled up easily to store and transport from one palace to another. Compared to tapestries, paintings were uncomplicated and reasonably priced for the mercantile class. 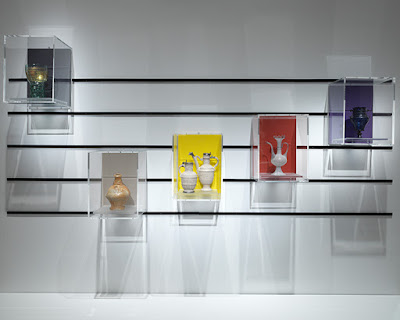 To illustrate the hierarchy of value visually, Michael Langley, an exhibition designer at the museum, devised a clever  installation.   He positioned objects in groupings indicating the relative cost of the raw material by height.  The higher the placement the pricier the material. He also used color as a value indicator by associating works with particular hues ranked according to the cost of 16th-century dyes. The most expensive item in a  group was set before black which was the costliest dye, the deepest and richest black achieved from imported North American logwood.   Purple came next derived from Mediterranean murex shells, then red from the madder plant followed by yellow weld, which also came from a plant, and beige, referring to cheap, undyed cloth.   Thus, placement and color indicate the object's 16th-century relative worth. 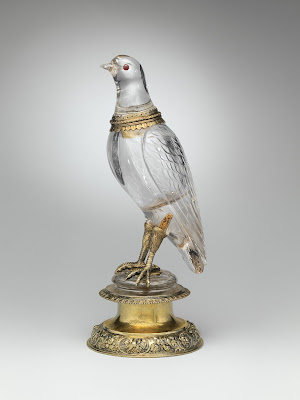 The exhibit's biggest-ticket item, valued at 275 cows, is a rock crystal bird with ruby eyes and a collar and legs of gilded silver.  In the 16th century rock crystal was equated pound for pound with gold.  It was prized for its hardness, transparency and radiance.

Low-end items are included as well.  1/12 cow could purchase the show's cheapest pieces: a salt-glazed stoneware jug, which was damaged in firing but kept and used, or one pilgrim badge made of a tin alloy, two are in the show.  Pilgrim badges were popular.  They were souvenirs indicating that the wearer had made a religious journey. A badge, moreover, acted as an amulet giving the owner protection from disease and other misfortunes. 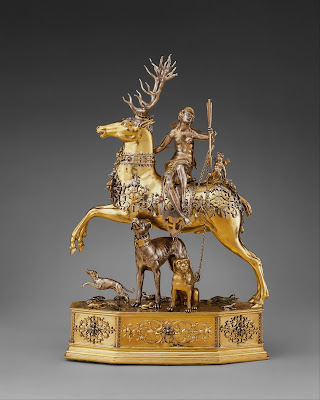 Technologically advanced devices are among those that cost the most. Examples include a 1579 Austrian celestial globe with clockwork, valued at 10o cows, a 1568 German astronomical table clock with an alarm assessed at 59 cows and an early 17th-century mechanical drinking game wine vessel,  Diana and the Stag, by a famous German goldsmith, evaluated at 79 cows.  The stag's head could be screwed off and the animal's body filled with wine. The piece could be wound up so that it would vibrate about the dining table.**  When it stopped, the guest closest to the stag's head would have to unscrew it and drink the vessel's entire contents.

Displayed in a nearby vitrine is a 16th/ 17th-century French lead-glazed earthenware puzzle bottle worth only 1/8 cow.  Made for the low-end drinking public, the bottle has three spouts so that the drinker had to decide which one to drink from to avoid getting spattered with wine. Other high- and low-end comparisons are an additional treat for visitors. 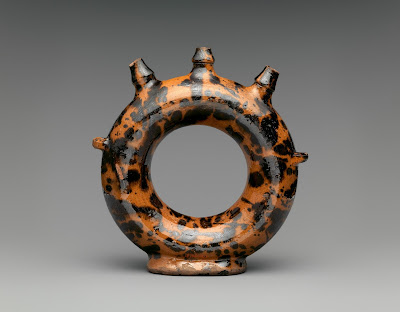 As for the Dürer items, the woodcut block was a form of commercial investment.  Woodcut prints were mass produced and less expensive than engravings which were made in much smaller numbers.  Carved wood blocks could yield 1000s of impressions, many more than those realized from metal plates which were more pliable and wore out sooner.  Although inexpensive, many woodcut prints could be sold to produce a handsome profit.  Consequently, the wood block was valued at 16 cows and the lowly paper print at 1/2 cow.

The fake Dürer sculptural plaque, 6 x 2 5/8 inches, was cut from a low-grade stone.  Dürer's works were in great demand especially after his death. Although the date 1509 appears on the plaque, it was actually made 70 years after the artist's death.  The plaque's sculptor sought to pass his work off as a Dürer by the early date and placing the artist's well-known monogram on the composition.  Falsely represented as an original, the sculpture was valued at 9 cows.

The exhibition gives visitors much to think about not least of which is how values change over time.   These objects may have previously been overlooked.  Now is a good time to see them. 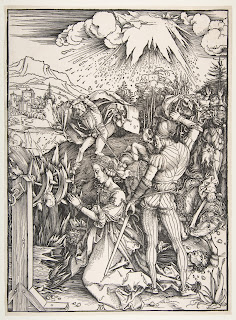 
**Boston's Museum of Fine Arts has a similar mechanical vessel.  To view it in action, see below:

Posted by ArtWithHillary at 7:56 PM