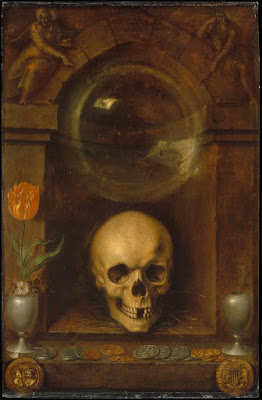 "To-morrow, and to-morrow, and to-morrow,
Creeps in this petty pace from day to day
To the last syllable of recorded time,
And all our yesterdays have lighted fools
The way to dusty death. Out, out, brief candle!
Life's but a walking shadow, a poor player
That struts and frets his hour upon the stage
And then is heard no more: it is a tale
Told by an idiot, full of sound and fury,
Signifying nothing."
William Shakespeare, Macbeth, Act V, Scene 5.

Certain themes appear and reappear as subjects for artists.  One such is vanitas, Latin for vanity. This subject came up in the discussion of Vincent van Gogh's flower paintings, see ArtWithHillary, June 2015, note 3.

Vanitas refers to life's brevity and the foolish pursuit of earthly goods and achievements.  All is transient except for religious values. The subject was an exceedingly popular one for Dutch painting in the early seventeenth century.

Jacques de Gheyn II's Vanitas Still Life in the Metropolitan Museum of Art is credited as the earliest known Netherlandish independent vanitas painting. The moralizing work is filled with symbols concerning the fleeting nature of life and the human folly of worldly possessions.  Although intended to instruct, the vanitas genre gave artists an opportunity to paint a variety of  objects and materials. 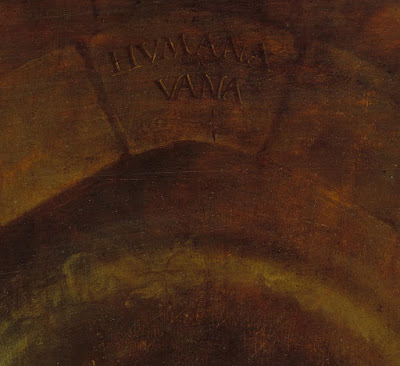 In De Gheyn II's panel, an inscription on the keystone of the stone arch specifies the painting's theme: HVMANA VANA, human vanity.  The arch forms a niche occupied by a skull and bubble - reminders of the certitude of death and life's impermanence.  The bubble contains some smaller images relating to the subject.   There is a leper's rattle and torture wheel.  The former had to be carried by those afflicted so that the non-sick would be alerted to their proximity.  Leprosy, incurable during this time, resulted in the body's gradual deterioration till death. The disease was thought to be the consequence of sinful behavior.   The wheel, used for torture and execution, always effected a slow, painful death. 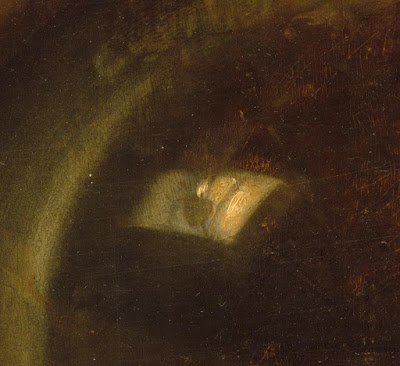 Some scholars have noted other items embedded in the bubble such as a heart. This viewer could not discern or identify anything but the torture wheel and, with difficulty, the leper's rattle with the naked eye. Under magnification, however, a rectangular reflection on the sphere's upper left reveals a burning heart pierced by a arrow.  A tiny cross may be distinguished on the top left of the heart.  The cross figuration, however, may just be scratches on the surface of the panel.

The heart with its flame forms the Sacred Heart, a Christian devotional symbol representing Jesus Christ's physical heart, pierced, bleeding and crowned with flames.  The fire indicates the transformative power of divine love - Christ's love and compassion for mankind.  Man's salvation comes about through His suffering.  The Sacred Heart is usually surrounded by a crown of thorns, one of the instruments of Jesus's Passion.  Its appearance represents the pain Christ endured for mankind's deliverance.  Its absence here may be the result of abrasion or paint loss.

The Sacred Heart devotions originated in the middle ages. The church, however, did not officially recognize it until the eighteenth century.  De Gheyn II probably had Catholic roots and could have been aware of its representation.

Although obvious Christ references were uncommon in seventeenth-century vanitas pictures, the painter was talented enough and innovative enough to create something unusual.  Furthermore, De Gheyn II had married into a prominent, wealthy and well-connected family.  He was acquainted with the most learned, forward thinkers of his contemporaries.  Financially set and free from commercial pressures, he could paint what he choose.  Even so, De Gheyn II most likely included the heart in the sense of earthly love, desire.  As such, it would fit into the general theme of all that is vanity. 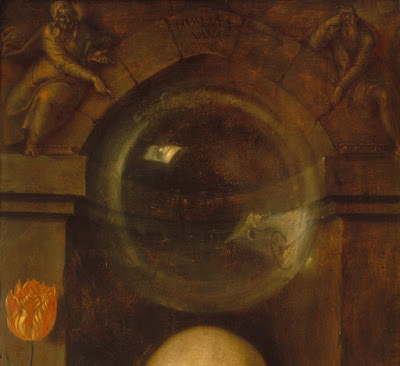 As for the bubble, the adage,"man is but a bubble" goes back to ancient Roman authors.  Writers in the Renaissance commonly used the comparison.  Erasmus wrote about the saying in his Adagia (II.iii.48): "Man is but a bubble.  The lesson of this proverb is that there is nothing so fragile, so fleeting and so empty as the life of man.  A bubble is that round swollen empty thing which we watch in water as it grows and vanishes in a moment of time."  Thus, it became a fitting symbol for the vanitas topos.* 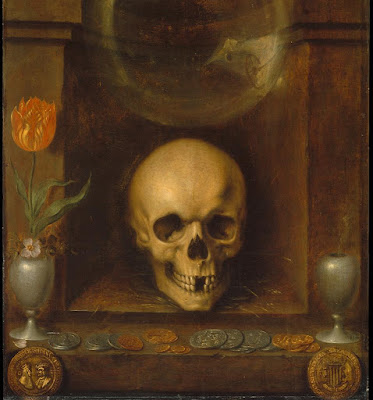 There is more.  The painting is chockablock with symbols.  On either side of the niche is an urn.  A puff of smoke rises from the one on the right; flowers, particularly one tulip, are on the left one.  Again, these are allusions to the shortness of man's existence.  The smoke vanishes quickly.   Cut flowers duly die as  Job (Job 14.2.) describes men "He comes forth like a flower, and is cut down:  he fleeth also as a shadow and continueth not.”

The flowers have another connotation.  Cut flowers were expensive in seventeenth-century Holland.  This was especially true of tulips which were introduced to Europe from Turkey in the sixteenth century. Tulips were quite different from European flowers and became exceedingly popular.  They were status symbols for the rich and prosperous Dutch burghers.  Trading in bulb futures reached ridiculous heights in the early seventeenth century.  This tulip mania speculation collapsed in 1637.  The term tulip mania has become a metaphor for any economic bubble where asset values diverge considerably from intrinsic values. When de Gheyn II painted his Vanitas, tulips were still an obsession of the rich - symbolic of man's inanity in seeking worldly possessions. Think about the current craze for women's designer handbags and the compulsive bidding up of certain ones. Be that as it may, de Gheyn II's didactic imagery continues.  The coins and Dutch medals refer to temporal accomplishments and wealth accumulation. The sculptural figures in the arch's spandrels depict the Greek philosophers Democritus and Heraclitus.  Known as the laughing and crying philosophers, they point down at the sphere.  One laughs at and one weeps at mankind's foibles.

More could be said but the above should give readers an idea about meanings in artworks that may be lost to contemporary viewers.  Don't fail to note that what was obvious to seventeenth-century viewers may not be clear to us today.

As for the last words of this post, take a look at one artist's thoughts on the De Gheyn II work.

Go visit the painting in the museum's Gallery 635.

*This month, the Public Broadcasting Service (PBS) televised Blue Lightning, an episode of the British Broadcasting Corporation (BBC) crime series, "Shetland."  During the two-part story, an autopsy is performed on what turns out to be a murder victim.  While performing the autopsy, the medical examiner remarks to the police official observer that the deceased "....was on the bubble."  The observer was perplexed.  She, the medical examiner, explained that the expression is American and is used when there is a sudden, unexpected death in an auto racing crash. In such a situation, the unfortunate driver is said to be a person whose "bubble has burst."  The fictitious examiner's reference to a car crash was new to this writer.  Most interesting was the the continued survival of "bubble" as a trope for life's precariousness, reminding death can happen unexpectedly, at any time.