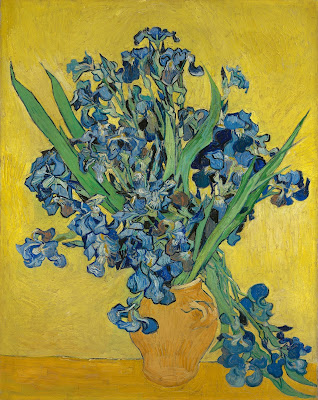 For the first time in 125 years, four Vincent van Gogh paintings are united in the Metropolitan Museum of Art's exhibition, Van Gogh: Irises and Roses. Two depict bouquets of irises and two of roses.  All share the same horizon line and appear as a series of pairs. Upright and horizontal orientations are shared by each floral type.  They are a study of contrasts:  vertical and horizontal formats, long and rounded bloom shapes and complementary (opposite) colors.

The exhibit highlights an aspect of art often overlooked.  That is, over time artworks may change. Specifically, in the case of these works, a pigment used by van Gogh has faded imparting a major change in the painting's coloration. 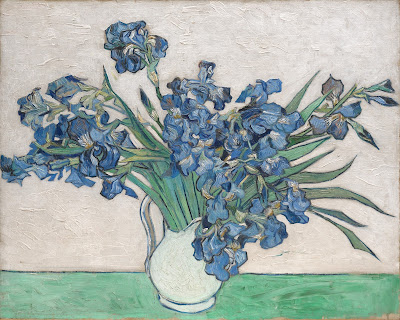 
The four large flower paintings were completed in 1890 at the end of the artist's stay at an asylum at Saint-Rémy-de-Provence in the south of France.  Van Gogh had taken a roll of canvas and cut it into four equal rectangular pieces.  As was his practice, he set about painting bunches of  flowers.  These were irises and roses which he had gathered in the asylum's gardens.

Still lifes, especially floral arrangements, were a way for van Gogh to investigate color theory.* He used flowers for intense study of color relationships, particularly contrasts and harmonies using complementary colors.  Complementary colors are opposite colors on the color wheel.  When painted side by side, such as violet against yellow or red and green, they produce the most intense contrasts.  On the other hand, colors next to each other on the color wheel yield harmonious effects.

On May 11, van Gogh wrote to his brother Theo:


"At the moment ... I’m working here with calm, unremitting ardour to give a last stroke of the brush. I’m working on a canvas of roses on bright green background and two canvases of large bouquets of violet Irises, one lot against a pink background in which the effect is harmonious and soft through the combination of greens, pinks, violets. On the contrary, the other violet bouquet (ranging up to pure carmine and Prussian blue) standing out against a striking lemon yellow background with other yellow tones in the vase and the base on which it rests is an effect of terribly disparate complementaries that reinforce each other by their opposition."
(Vincent van Gogh The Letters, 870)

Two days later in another letter to Theo, he added:

"I’ve also just finished a canvas of pink roses against yellow-green background in a green vase....I tell you, as regards work, my mind feels absolutely serene and the brushstrokes come to me and follow each other very logically."
(Vincent van Gogh The Letters, 872)

Van Gogh would be discharged from the asylum the following Sunday on May 16.  The same day he left for Paris.  The paintings had been finished by then.

The artist had worked with a brilliant scarlet pigment called geranium lake.  The color was highly light sensitive.  Although well-informed about pigments and their properties, the lake red faded more quickly than van Gogh had expected.  Violets (a mix of blue and red pigment) became blue; pinks (a mix of white and red pigment) turned white. 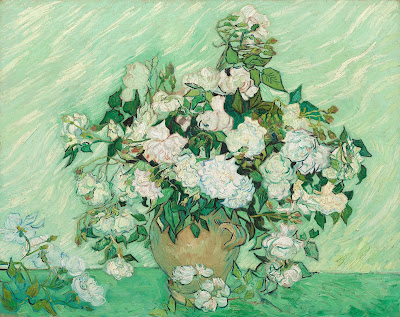 The red which endowed the roses with their pink color disappeared. The blossoms turned white.  Bright red rose buds took on a flesh-like tone. Violet irises became blue.  Pink backgrounds white.  The compositional contrasts of  pinks against greens and violets against yellows no longer exist.  A Fauvist look had been tamed.**

Viewers can see the "before and now" look of the paintings as well as learn about the artist's working methods in two short videos on the wall opposite the actual works.  Technical analysis has enabled the digital recreation of the images.

Another aspect of the paintings should not be ignored.  The flowers had been in full bloom, at their peak of beauty, when van Gogh started to paint.  He had to work quickly to capture their glory.  Nature, however, was winning out.  Iris blossoms started to shrivel; roses begun to droop and lose their petals. 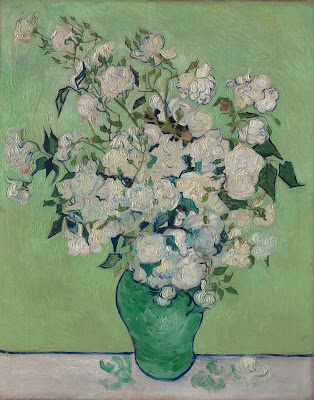 Though the canvases pulsate with pleasure through their compositional design, impactful brushstrokes and still lush colors, they impart a slight disturbance. Thoughts go to seventeenth-century Dutch flower paintings which were symbolic of nature's fleeting earthly pleasures.*** With this tradition in mind, the van Gogh series can be seen as a memento mori - a reminder of life's transience and death. Death is present amidst life.  The transitory nature of pigments is recalled.  Paintings change.  Pleasure and unease co-exist.  Van Gogh died just over two months after these works were completed.

Although colors have dimmed, the visual delights of van Gogh's large bouquets remain abundant.  Such is van Gogh's genius.  See the show.

Van Gogh:  Irises and Roses
May 12, 2015 - August 16, 2015
The Metropolitan Museum of Art
1000 Fifth Avenue (at 82nd Street), Manhattan
Hours:
Open 7 Days a Week
Sunday–Thursday: 10:00 a.m.–5:30 p.m.
Friday and Saturday: 10:00 a.m.–9:00 p.m.
Closed Thanksgiving Day, December 25, January 1,
and the first Monday in May
____________________
Notes:
*Van Gogh took great interest in the color theories of Charles Blanc who published works investigating color relationships such as how certain colors are reinforced when placed next to each other.  Blanc's writings were well-known among nineteenth-century artists and highly influential. 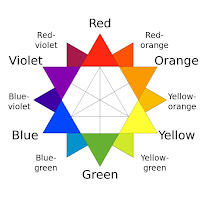 For a concise introduction to color theory and the color wheel see TEWM The Electric Matrix of Digital Technology.

***For an example, see Jacob Vosmaer's A Vase with Flowers in the museum's gallery 635. 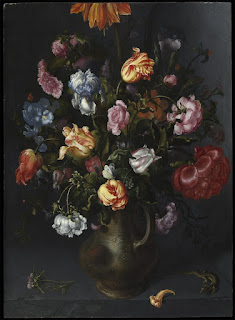 The vanitas theme is derived from the Book of Ecclesiastes 1:2, "Vanity of vanities, all is vanity."  Symbolic imagery include wilting flowers (death); butterflies (transformation); cracking parapets (time's destructive nature); and lizards (changeability).  Memento mori are versions of the vanitas theme with emphasis on mortality.   Keep in mind,  the moral aspects of these works gave artists an excuse to paint some beautiful, sensuous pictures of the life they saw around them.
____________________
y
Posted by ArtWithHillary at 1:52 PM