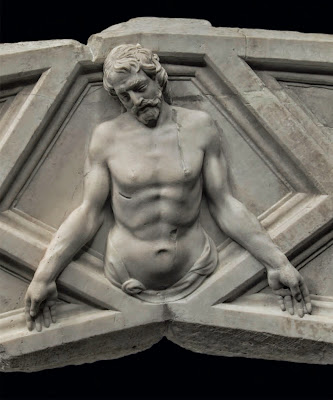 More than half the sculpture on display at the Museum of Biblical Art's (MOBIA) exhibition, Sculpture in the Age of Donatello: Renaissance Masterpieces from Florence Cathedral, are small in scale. Their modest size offers particular enjoyment.  Visitors are able to take in the totality of these works at close range.  Most are unobstructed by glass. Viewing details is easy.  A good example is the marble relief Vir Dolorum (Man of Sorrows) variously attributed to Donatello or Nanni di Banco but now  largely accepted as an early Donatello. Designed for the Florence cathedral's northeast entrance as the keystone for the upper register arch, this beautifully rendered Christ figure is the embodiment of pathos.  He represents the "man of sorrows" from the Old Testament's Book of Isaiah, 53.3, which contains the prophetic description of the coming Messiah: "He is despised and rejected by men; a man of sorrows, and acquainted with grief...."  The sculpture portrays Christ just after resurrection, neither dead nor alive. 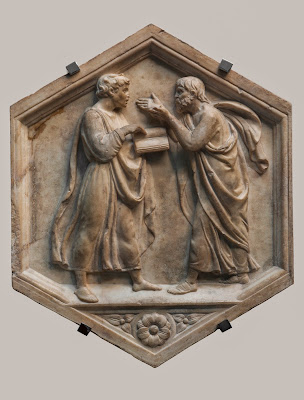 While many of the pieces displayed evoke sadness or reverence, those of Luca della Robbia charm.  In 1437, the artist was commissioned to create five marble hexagonal panels for the lower level of the cathedral's bell tower.  These would complete a cycle portraying the activities of man which was begun in the mid-fourteenth century.

Luca was a well-known sculptor, considered by contemporaries on the level of Donatello and Brunelleschi.  Today, he is better known for his polychrome enameled terra-cotta reliefs than his marble or bronze sculptures.  The latter works, however, are equally important.  The exhibition includes three of the artist's marble panels destined for the bell tower.  They  illustrate the liberal arts, pursuits related to the intellect.

The artist's Dialectic shows two classically garbed men engaged in a spirited discussion.  Both open-mouthed figures gesticulate with animation. The younger man points to a section in an open book as if to support his argument while the older gentleman' s gesture underlines his point. The two have been identified as Aristotle and Plato whose writings were studied in fifteenth-century Florence.  The scene's realistic actions, brings to mind present day Florence where you may witness such disputations. For the Florentines still love to enter into a good debate.

In the excellent exhibition catalogue, Monsignor Timothy Verdon, Director of Museo dell'Opera del Duomo and one of the two curators of the exhibition, draws attention to the idea that church decorations, whether sculpture, painting, stained glass or whatever medium, should be viewed in a religious context.  The imagery foremost was created as an expression of faith, intended to inspire faith.  In the case of the bell tower reliefs, he proposes that the iconographic program refers to the writings of a Florentine Dominican theologian active in the thirteenth and early fourteenth century.  Specifically, the scenes relate to the text which describes the church as bringing new life to human knowledge activities and the role these activities have in disclosing Christ's perfection.  Interpretations aside, Luca's naturalism captivates. 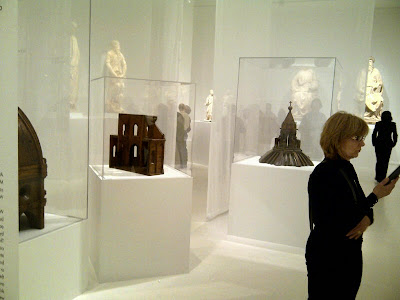 Not to be forgotten is the architectural masterpiece of Filippo Brunelleschi:  the dome of Santa Maria del Fiore, the main church of Florence.   Six hundred years after its creation, the dome still dominates the city.  Until St. Peter's in Rome was built, Brunelleschi's construction was the highest dome ever made. 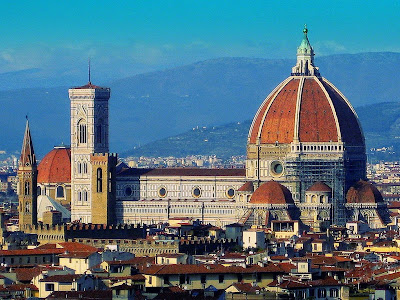 Traditionally, domes were built using wooden scaffolding which would support the structure as it went up.  The cathedral's space was just too big.  The dome had to cover a width of approximately 150 feet - almost as big as the ancient Pantheon built around 129 A.D.  Furthermore, the dome had to start about 180 feet above the ground.  There was just not enough wood around to make this method feasible.  Brunelleschi came up with an ingenious plan to solve the problem.  He would create a double shell - one dome within another - made with masonry that locked in place as each layer was completed.  The dome's downward and outward pressure would be counter-balanced by stone and wood chains secured with iron.  To accomplish the task, Brunelleschi invented new types of lifting mechanisms as well as innovative means to obtain the needed supplies down the city's Arno River.  At the time, there was much doubt his dome would hold up.  Its success put all criticism to rest. 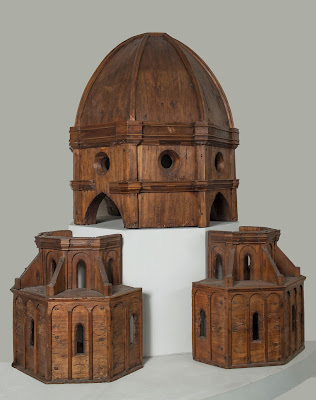 The authorship and dating of the two models in the exhibition**,  the dome's model and the model of its lantern, remain debatable.  They were made to give a more complete idea of how the structure would look.  However, the originally polychrome exterior decorations were lost during their restorations carried out after the disastrous flooding of the Arno in 1966.  Today, they look bare but still give viewers an idea of Brunelleschi's genius and working procedures.   He would create models to explain particular construction details that workers could follow.  To maintain control, Brunelleschi made sure not all was revealed in these mock-ups.

The Florence cathedral was consecrated on March 25, 1436 some sixteen years after it was begun.  For this occasion, Guillaume Dufay, the most important composer in Europe during the mid-fifteenth century, wrote his celebrated motet, Nuper rosarum flores.  The music's  verses describe the church as magnificent and "...a temple of great ingenuity...." Enjoy the music and, above all, do not miss the MOBIA's show. It is a once-in-a-lifetime opportunity.

*Please note:  this is the second part of a two-part blog post.  For part I see ArtWithHillary April 2015.
**In the exhibition installation, the model for the dome and the model for the apses are in separate vitrines.

Postscript:  Sadly, the Museum of Biblical Art will close on June 30, 2015.  The museum was unable to secure the needed funding to continue.  Over its ten years of existence, MOBIA has presented critically acclaimed exhibitions contributing to New York City's cultural and intellectual life.  The current presentation, Sculpture in the Age of Donatello: Renaissance Masterpieces from Florence Cathedral, assures the museum will go out on a high note.

Posted by ArtWithHillary at 1:52 PM