Paths to Prayer I: 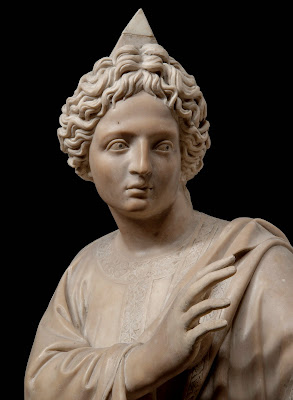 The great art historian Erwin Panofsky described the difference between short lived renascences that occurred during the Middle Ages and the Renaissance that occurred in Italy from the fourteenth to the fifteenth century.  Panofsky wrote, "The Middle Ages had left antiquity unburied....The Renaissance stood weeping at its grave and tried to resurrect its soul.  And in one fatally auspicious moment it succeeded."*

The realization of these remarks can be seen in the twenty-three sculptures on view at the Museum of Biblical Art's (MOBIA) exhibition, Sculpture in the Age of Donatello:  Renaissance Masterpieces from Florence Cathedral.  These works rooted in antiquity inspired faith and prayer.  Indeed, they were created with this in mind.  They were paths to prayerfulness.  As this exhibit makes apparent, the seemingly opposing mix of pagan world forms and Christian theology yielded some of the most moving imagery in the history of art. 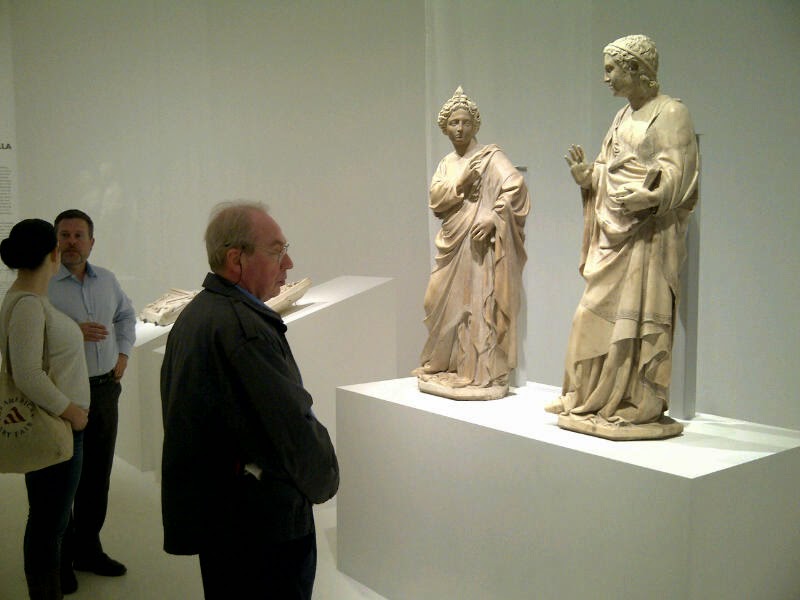 Installation View, Sculpture in the Age of Donatello:  Renaissance Masterpieces from Florence Cathedral, Museum of Biblical Art, New York, Archangel Gabriel of the Annunciation on left, Virgin Mary of the Annunciation on right, attributed to Giovanni d’Ambrogio (active 1382–1418), late 14th century, marble
Opera di Santa Maria del Fiore, inv. no. 2005/276 and 277.
Photo:  Hillary Ganton
Most of the exhibition's sculptures have never before left Florence. After their return, they will probably never travel again.  This unprecedented loan was made possible by the closing of the Florence Cathedral’s Museo dell’Opera del Duomo while undergoing expansion and renovation.

Setting the stage:  the Cathedral of Santa Maria del Fiore is Florence's main church.  Begun in the 13th century, the cathedral developed by the early 15th century into the largest enclosed space in the world.  The edifice was crowned by an enormous masonry dome, an engineering achievement devised by the illustrious architect, engineer and artist Filippo Brunelleschi.  The cathedral, its baptistry and bell tower, called the campanile, make up the building complex known as the Duomo.  The decoration of these buildings, both interior and exterior, occupied the wealthy, commercial city of Florence for several hundred years.

The Duomo was not just a source of civic pride but expressed Florentine's profound religious sense. With money from wool production and international banking, the city had the resources to hire the best artists of the day to create in the most modern style works that would glorify God.  The results were revolutionary artworks in marble, bronze, painting, stained glass and more.  A glimpse of this accomplishment is on view in the MOBIA show beginning with the Annunciation, a sculptural ensemble attributed to Giovanni d'Ambrogio.   The work exemplifies the transition from the late Gothic to the early Renaissance style of art.  Under elegant drapery folds of toga-like garments, the figures sway in the rhythmic earlier Gothic manner but their heads are purely classical like Roman portraits.

The exhibit quickly moves along into the brilliance of the Renaissance when mind and motion are coordinated in one form.  Life-like figures seem capable of speech.

The star of the show is without doubt Donatello, the great Renaissance sculptor.  New York has none of his works.  In fact, in the United States there is only one Donatello:  a small relief in Boston's Museum of Fine Arts.  Thus, to see three of Donatello's major sculptures along with seven others wholly or partially attributed to him is a special treat. 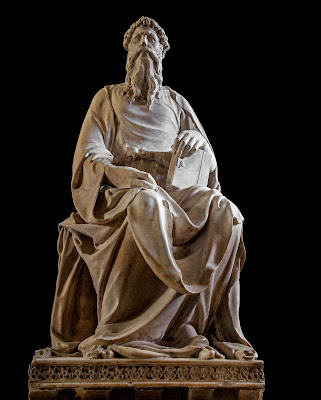 The St. John the Evangelist was Donatello's first large scale commission.   The artist took into account the placement of the figure: a niche about ten feet above ground, approximately four plus feet above the head of an average viewer, on the right side of the main entrance of the Florence Cathedral.  When seen at eye level, St. John's torso appears elongated and his thighs unnaturally downward sloping. Viewed from below, the figure seems anatomically correct.  The evangelist holds a book in his left hand, perhaps the Gospel of John or some other religious text.   His right hand, resting on his right thigh, probably had held a writing implement, likely a metal pen.  He looks out suggesting contemplation.  He may be ruminating on something already written or thinking of new ideas.  Michelangelo (1475 - 1564) who lived in Florence would have passed this statue on many occasions.**  Some 100 years after its creation, the St. John would be the inspiration for Michelangelo's Moses on Pope Julius II's tomb. 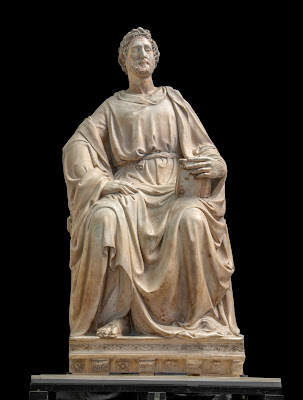 Paired with the St. John is Nanni di Banco's St. Luke the Evangelist. The work originally flanked the left side of the cathedral's main portal in the niche opposite St. John's.  While St. John seems lost in thought, St. Luke appears to look down to his left at those who pass by perhaps about to enter the cathedral.  An open book resting on his left thigh might indicate he has been interrupted by them while reading.  Like St. John, the full effect of Luke's pose only becomes apparent when the statue is confronted from below. 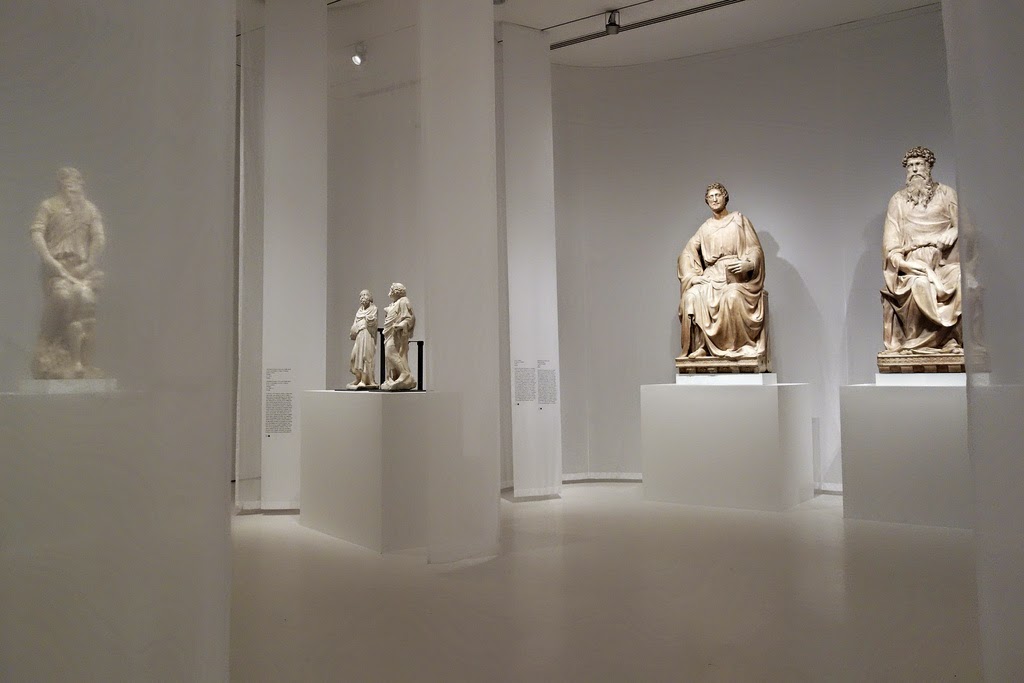 The exhibit's installation has done well by placing the two Evangelists next to one another each on pedestals about six feet from the ground - four feet short of their first location.  The sight is awe inspiring.  Both seated figures are approximately seven feet tall and weigh about 1,600 pounds. 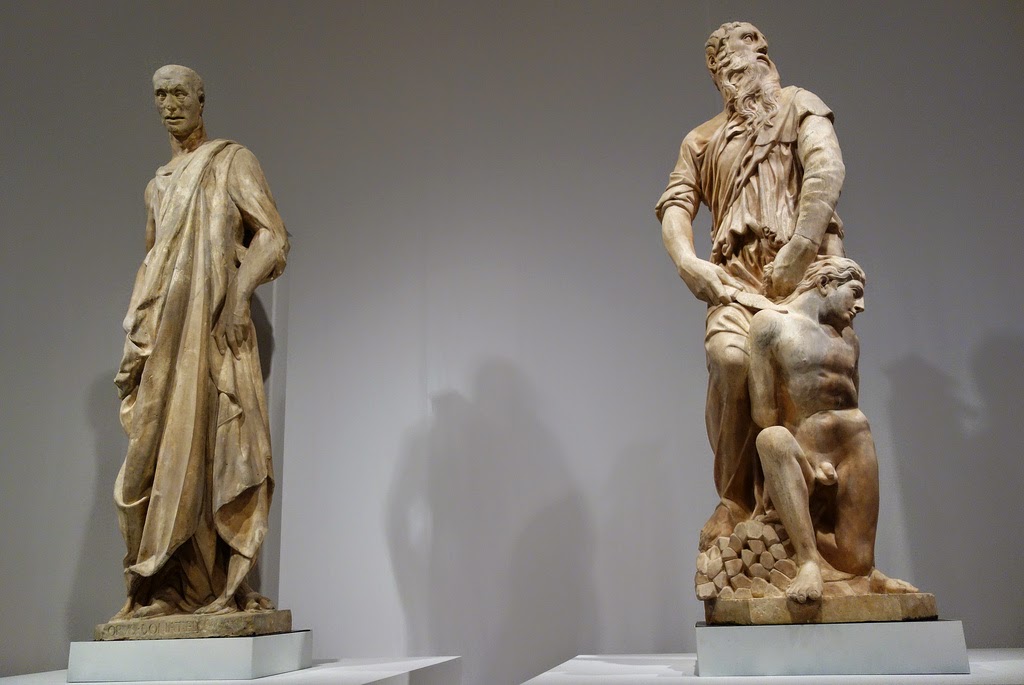 
Two other monumental pairings are stand-outs: Donatello's Prophet known as the Zuccone (pumpkin head or bald head) and Abraham and Isaac (the Sacrifice of Isaac) by Donatello and Nanni di Bartolo.  Both sculptures were made for niches on the Florence Cathedral's bell tower, the campanile. The earlier work, the Abraham and Isaac group, was carved for the upper row, east side of the tower.  It was the only narrative sculpture on the edifice and the first Renaissance sculpture of two figures carved from the same marble block. 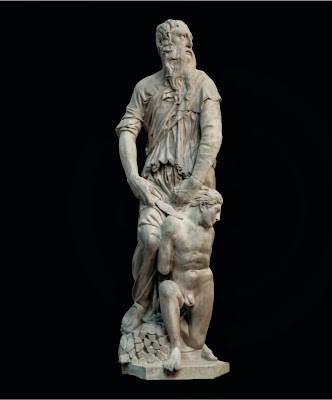 As usual with Donatello, adjustments were made in the figures's anatomies so when viewed from the low vantage point, the figural proportions appear natural. Most scholars today attribute the majority of the work to Donatello. The sculpture renders the moment when Abraham begins to realize that he would not have to sacrifice his son to prove his faith in God.  He has heard the unseen angel's order and looks up.  His open-eyed, closed-mouth expression seems to denote a moment of comprehension.

Abraham's right hand holds the knife that would have been the instrument of slaughter.   His grip has just begun to slacken.  Pressure of blade against skin has relaxed.  The knife's sharp edge has been turned away from the youth's neck.  The patriarch's left hand still holds back his son's hair readying the boy for the kill.  The nude youth's head turns downward and away from the father.   Yet, his body is almost nestled within his parent's powerful legs as if to indicate the source of his life.  Details are realistic:  Abraham's right sleeve is rolled up for the intent work, sacrificial wood is piled under his right leg, materials are differentiated - hair, beard, cloth, wood and skin are portrayed with consummate skill. 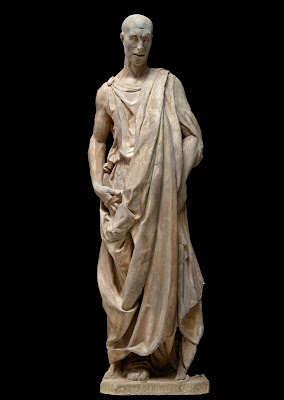 
The Prophet is a masterwork of Donatello's mature style.  It was made for the third story, north side of the bell tower.  The work is an intensely realistic portrayal.  One can easily assume it depicts a specific person.  Immediately acclaimed and much valued, the Zuccone was moved to a more visible location on the campanile's west side some thirty years after its original placement.  Archival documents suggest the statue may represent the prophet Habakkuk whose writings stressed faith in God's justice.   Be that as it may, Giorgio Vasari (1511 - 1574), painter, architect, historian and writer, recorded that Donatello considered the work his masterpiece and, at times while the statue was still in  his studio, commanded it to speak.

**The cathedral's main facade statues were removed in 1587 and placed in the cathedral's east tribune.  They entered the Duomo Museum in the mid-nineteenth century.

Posted by ArtWithHillary at 2:50 PM