The Making Of History Brick By Brick


Kingdoms come and go.  Some are remembered although their great cities and monuments lie in ruin, often unrecognizable.  The exhibition, A Wonder to Behold:  Craftsmanship and the Creation of Babylon's Ishtar Gate, at New York University's Institute for the Study of the Ancient World (ISAW) sheds light on the building practices, craftsmanship, religion and values of one ancient empire through a focus on the iconic edifice that defines it.  Over 100 objects are on display from 9 major US and European museums.

The city of Babylon was the capital and religious center of the Neo-Babylonian Empire (626 - 539 B.C.). Under King Nebuchadnezzar II (r. 604 - 562 B.C.) this empire spread from Mesopotamia to the Mediterranean Sea, the Red Sea and the Persian Gulf, encompassing what today is called Middle East - Iraq, Syria, Jordan, Lebanon, Israel, Southeastern Turkey and parts of Iran.  Nebuchadnezzar built lavishly in Babylon, adorning his capital with temples, palaces, gateways and thoroughfares.  His beautification sought to impress. The city became an emblem of his power.  Its archeological remains cover over 2000 acres. 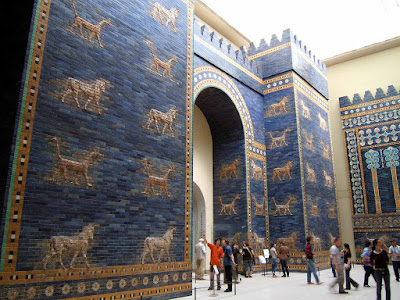 It was Nebuchadnezzar who had the imposing Ishtar Gate and Processional Way built in Babylon about 575 B.C.  Actually there were three phases of construction.  It seems the King would remake structures as more advanced building and decorative techniques were developed. The Ishtar Gate was one of eight portals to the city.  It was the most important dedicated to Ishtar, the goddess of war and sexual love. Originally, it was about 49 feet high and 32 feet wide.  The Processional Way, the corridor to the gate, has been estimated to be approximately 591 feet long; its walls on each side about 50 feet high; and, its width approximately 66 feet which could accommodate pedestrians and chariots.

Part of the gate and a portion of the Processional Way have been reconstructed on a smaller scale in the Pergamon Museum, Berlin, Germany.  The Pergamon Museum is part of the Vorderasiatisches Museum collection of the Staatliche Museen zu Berlin.  Modern glazed bricks are used in more than 80% of the recreation.  In addition, an even more reduced version of the gate has been reproduced at the ruins of Babylon in Iraq. Although extensive  studies have been done, scholars are still uncertain about some aspects of the monuments such as the height levels of the processional animals decorating the walls or the crenellations capping top levels.

There were occasional limited excavations at the Babylon site during the nineteenth century. Notably the British business agent, scholar, antiquarian and collector Claudius James Rich (1787 - 1821) sketched a plan of the ancient city in 1811 before its excavation.  He also dug up inscribed bricks and explored underground cavities.  Rich's findings were subsequently published and his work is considered the starting point of Mesopotamian archeology. 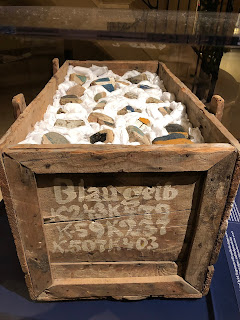 Installation view of the exhibition A Wonder to Behold:

It took almost a century for a full-scale archeological examination of the area Rich identified.  From 1899 through 1914, the German archeologist Robert Koldewey (1855 - 1925) directed the  excavation with some 250 workers.  They unearthed walls, temples, various edifices, the Ishtar Gate, the Processional Way and more. In ancient times, after the city's edifices were no longer considered important, the monuments were taken apart. The bricks, which were of high quality, were stripped of their upper surface decoration and reused for other structures. Tens of thousands of glazed and molded brick fragments were left in mounds up to 66 feet high. These fragments were sent back to Germany in two shipments:  399 crates in 1903 and almost 400 crates in 1927. 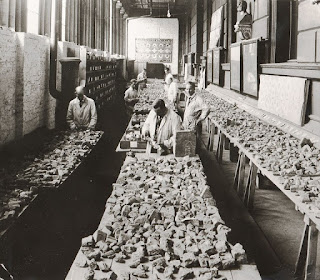 In Berlin the pieces were cleaned, sorted and reassembled.  It took decades. Conservators were helped by the drawings and watercolors of Walter Andrae (1875 - 1956), German archeologist and architect, who took part in the Babyon excavation under Koldeway. 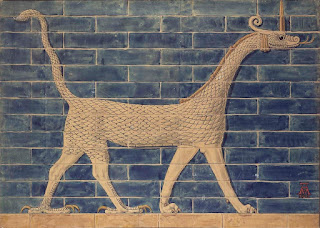 Andrae visually documented approximate to scale what was seen in situ.  His depictions detailed the brick arrangements and colors of the decorative elements and animals.

Andrae also reproduced the signs that were found on the center and each end of the top side of the bricks.  He deciphered their meaning as fitters' marks indicating the brick's placement vertically and horizontally.  This discovery immensely aided the reconstruction of the Babylon monuments.  Visitors are able to compare the brick markings in Andrae's watercolors on view with fitters' marks on actual bricks in nearby vitrines.

Clay, which was found everywhere, was the building material of choice. Wood and stone were not readily  available.  The Babylonians were expert brick makers and were well known for it.  The great King Darius I (r. 522 to 486 B.C.) of Persia wrote in a famous inscription, "the men who wrought the baked brick, those were Babylonians."  For the ancients, the Babylonian structures with their glazed bricks were considered a work of wonder.

A variety of clay bricks were made; they could be flat, molded, painted or glazed.  Fine textured clay mixed with water and strengthened with thinly cut up straw was pushed into standard square or rectangular molds to be sun dried and fired.  The exact methods used to make molded bricks with raised relief are not known since no molds survive. Scholars speculate that they used specialized wooden molds with a detachable fourth side.  The detachable side made removal of the brick easy without the possibility of injury to the relief.  The wood was likely sourced from Lebanon. 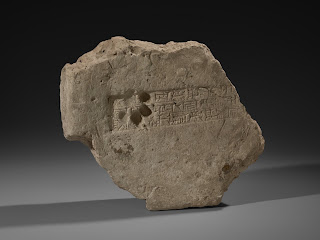 For further understanding and information, there are six explanatory iPads in the exhibition, three in each gallery. One shows a series of 1976 photographs of brickmaking in Baghdad, Iraq which is still essential for modern Middle Eastern construction.  In ancient times, millions of bricks had been laid in the sun to dry. Dogs roamed the brick drying area attested to by paw marks left on bricks made by the animal stepping on the still wet clay.  A sample of this is in the show.

The other iPads inform on glassmaking, material sources of the ancient Middle East, a virtual model of the ruins, other ancient Middle Eastern buildings with glazed and molded bricks and ancient royal and workers' brick inscriptions.  The last topic is particularly enlightening. 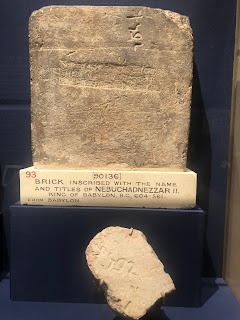 Traditionally, rulers had bricks marked with cuneiform inscriptions which were stamped or incised.  These were commemorative messages such as the cuneiform stamp of Nebuchadnezzar II on bricks displayed in the exhibit.  One from the British Museum translates, "Nebuchandnezzar, King of Babylon, who cares for the Esagila and Ezida, eldest son of Nabopolassar, King of Babylon." The King's cuneiform inscription with its wedge-shaped characters is in the Babylonian dialect of the Akkadian language, a semitic language spoken in ancient Mesopotamia.  On the same clay brick there is a name incised by hand in the Aramaic alphabetic system of writing. The Aramaic language was probably spoken by most workers during the period of the building of the gate.  The name may refer to an individual in charge of some part of the project such as the brickyards. Many alphabetic inscriptions of individuals are found on bricks. More research is needed to determine their function.


The exhibit makes clear that the portrayal of real and hybrid animals is of importance as the animals are meant to be seen as protectors. Examples are the mušhuššu-dragon with its snake's scaly body and forked tongue, front paws of a lion and back legs talons of a bird of prey or the open-mouthed lion with its mane extending along its body like a wing.  Each animal is associated with a specific god. Some 60 lions lined each side of the Processional Way facing the oncoming visitor to the city.  These were not experienced by the ancients as merely decorative but rather imagery that was endowed with spiritual force. They could connect the living to the divine.  The shine of the material, how the glaze reflected light, connected viewers to the supernatural. Under the bright Middle Eastern sun, the intense sparkle of monument walls could physically overcome beholders. The materials used were considered sacred as were the representations.  Those that worked on the structures were considered sacred too, as their knowledge and skills were described as coming from the gods. Clay was the substance of creation - gods made the first humans from clay. The vitreous substances like glass or glazes were as highly valued as precious or semi-precious stones or metals.  They were possibly ranked even higher because they underwent transformation. 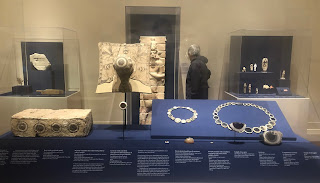 Installation view of the exhibition A Wonder to Behold:  Craftsmanship
and the Creation of Babylon's Ishtar Gate,
November 6, 2019 - May 24, 2020
New York University's Institute for the Study of the Ancient World (ISAW)
Photo:  Hillary Ganton

This may be a difficult concept to grasp as we prize precious and semi-precious stones and certain metals over vitreous substances.  Glaze can visually look like lapis lazuli in color and luster.  The term "stone" for the ancients indicated natural and artificial materials.  Nebuchadnezzar II describes having the city walls' entrances "...artfully made with shining lapis lazuli baked bricks on which bulls and mušhuššu-dragons are created."  The blue glazed bricks is his reference to lapis lazuli. Copper, found in Iraq, can be used in glaze recipes for creating a blue resembling that very same stone. Lapis lazuli was not found in the Middle East, Afghanistan being the primary source at this time. In the ancients' mind, stone and glaze are conflated. When cures for illnesses are specified as something the sick should wear and what it should be made up of, man-made products were on par with that of precious stones and metals for the remedy.  An illustration of this, a reconstructed necklace, is in the show.

The exhibition enlightens on many facets of archeological investigations and the ancient world of Neo-Babylonia.  Visitors will find much to discover and enjoy.

On a personal note:

For this writer, the show brings to mind the poem Ozymandias by Percy Bysshe Shelley (1792–1822).

I met a traveller from an antique land
Who said: Two vast and trunkless legs of stone
Stand in the desert. Near them on the sand,
Half-sunk, a shatter'd visage lies, whose frown
And wrinkled lip and sneer of cold command
Tell that its sculptor well those passions read
Which yet survive, stamp'd on these lifeless things,
The hand that mocked them and the heart that fed;
And on the pedestal these words appear:
'My name is Ozymandias, king of kings:
Look on my works, ye Mighty, and despair!'
Nothing beside remains. Round the decay
Of that colossal wreck, boundless and bare,
The lone and level sands stretch far away.
(First Published 1818)