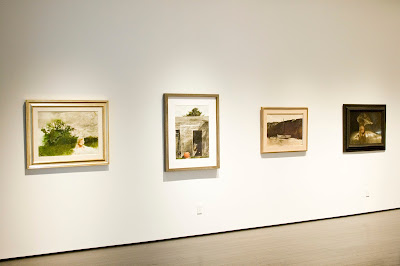 Wyeth, called Andy by family and friends, has always elicited opposing reactions.  Some respond to his work as kitsch, as overly sentimental and cloyingly romantic with its traditional subject matter of landscapes, seascapes and portraiture.  Others hold he is an artist of genius possessing extraordinary technical skills, expressive capabilities and is a master of the mediums of his choice.

Wyeth is categorized as a realist or magic realist artist. Yet, he described himself as an abstract painter.  When the American realist painter and printmaker Edward Hopper (1882 - 1967) wanted Wyeth to sign a petition protesting the increasing number of abstract expressionists who had been included in the 1966 annual exhibition at the Whitney Museum of American Art, he objected.  Wyeth felt a kinship with such abstract painters as Clyfford Still (1904 - 1980) and Mark Rothko (1903 - 1970) in that their work and his went beyond what could be seen.  He said he probably had more in common with abstract expressionist Franz Kline (1910 - 1962) than people realized. Wyeth may also have wanted to avoid public controversy since a major show of his work dating from 1938 through 1966 was touring and coming to the Whitney in February 1967.* 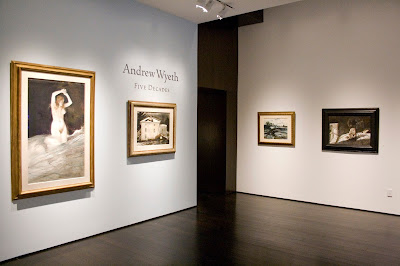 Wyeth was born to a family of artists and was taught by his highly successful painter illustrator father Newel Convers Wyeth known as N. C. Wyeth.  He was the youngest of five children who all spent evenings drawing.  The family lived in Chadds Ford, Pennsylvania and summered in Cushing, Maine.  The artist would spend his life in Chadds Ford and Maine painting his surroundings, family and friends. His father was his greatest influence.  Early on, however, he had a keen interest in the work of the German Renaissance artist Albrecht Dürer (1471 - 1528) and the watercolors of the American painter Winslow Homer (1836 - 1910).  Wyeth had his first solo exhibition in 1937 when he was twenty. It took place at the Macbeth Gallery in New York City, the first art gallery to specialize in American art.  All 23 paintings catalogued sold out in 2 days.  It was the first of many distinctions that came to the artist throughout his career.

In 1955 Wyeth was the youngest member elected to the American Academy of Arts and Letters and the National Institute of Arts and Letters.  He was the first artist ever to have a one-person show in the White House, Washington, DC, February 19, 1970 - March 28, 1970. He was the first living American artist to have a solo exhibit in New York's Metropolitan Museum of Art, October 16, 1976 - February 6, 1977 and the first living American artist to have an exhibition at the Royal Academy of Arts, London, UK, June 6 1980 - August 31, 1980. Wyeth received some 26 honorary doctorate degrees including one from Harvard University.  He had exhibits throughout the United States, Canada, Europe, Japan and Russia.  In 1963 he was awarded the Presidential Medal of Freedom by John F. Kennedy, a first for a visual artist and the same year was on the cover of Time magazine.  He was elected as an associate to the Académie des Beaux-Art Institut de France in 1976, the only American painter besides John Singer Sargent (1856 - 1925) to become a member.  In 1990 Wyeth was awarded the Congressional Gold Medal by President George H. W. Bush, which had never been given to a visual artist before. President George W. Bush presented him with the National Medal of Arts in 2007 a little over a year before his death in January 2009.  On the 100th anniversary of Wyeth's birth, the U.S. Postal Service issued a sheet with 12 stamps each with a different image of the artist's paintings.

Wyeth chose to work in the quick-drying mediums of tempera and watercolor.  The former is made by mixing pigments with egg yolk that has been diluted with distilled water; the latter is made by mixing pigments with a binder such as gum arabic. Tempera is applied to a prepared support such as a wood panel covered with gesso which is a mix of chalk, glue binder and white pigment that makes for a smooth, hard, absorbent surface.  Watercolor paint is applied with water to a support like paper.  The water evaporates and the binder fastens the pigments to the support surface.  Both mediums require the artist to apply layer upon layer of paint to achieve desired colors and textures.

Wyeth is noted for his innovative use of dry brush technique.  In a 1976 interview with Thomas Hoving (1931 -2009) then director of the Metropolitan Museum of Art, New York, the artist explained "I paint with a smaller brush, dip it into color, splay the brush and bristles, squeeze out a good deal of the moisture and color with my fingers so there is only a very small amount of paint left. Then when I stroke the paper with the dried brush, it will make various distinct strokes at once, and I start to develop the forms of whatever object it is until they start to have real body…."   He could also achieve highly detailed imagery with dry brush.  The artist employed a variety of other techniques for instance, with watercolors, wet on wet, color splattering and sgraffito or scratching. 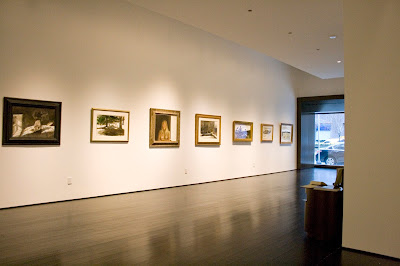 The works on view at the Forum Gallery demonstrate Wyeth's technical command and his ability to be a realistic and abstract painter at once. Throughout the exhibition there are sections of paintings which take viewers out of the realm of representation into a painterly, gestural sometimes calligraphic sphere.  Look at the specks, dabs and washes in the snow that covers about two-thirds of the watercolor East Point Lighthouse or the beige colorations in the snow in The Blonde Study or the scratches, smears and muddle of browns in the foreground of Untitled.  Spend time with areas of the ruffled bed covering in Winfields (first version of Heat Lightning) and the water of Surf.

Frozen Race is a painting of the Wyeths' early 18th-century mill which they purchased in 1958, restored and made into their primary residence.  In front is Nell, the Wyeths' much loved dog.  The dog is described in brown dabs of washes under which can be seen the dark sketched outline of its form.  A deep earth tone splotch on its face defines a shadow which creates the effect of having the dog seem to turn toward the viewer.  The mill's wall and sixteen panes of glass in the double hung window are a tour de force in making abstract markings metamorphose into a representation of solid structures. The painting gives the impression of emanating light from the areas illuminated by the sun.  Light falls on the foreground patches of snow, the dog's body, the upright post and, of special beauty, the remnants of snow on tree branches at the far left.  The last mentioned highlights sparkle and compare to the accents of light on the hair of Helga in the adjacent painting Letting Her Hair Down. 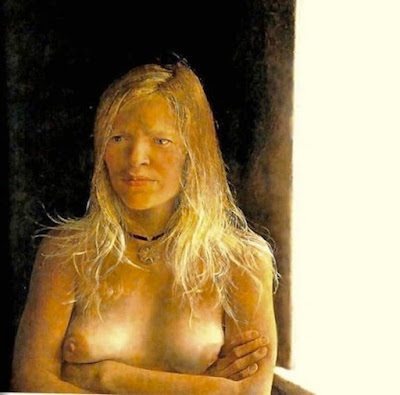 Helga is Helga Testoff (1933 or 1939 - ) who was married and also lived in Chadds Ford.  She was caring for Wyeth's old friend and model, the farmer Karl Kuerner when the artist began to use her as a model in secret.  Wyeth was in his early 50s and Helga in her 30s when they met. Their clandestine relationship lasted from 1971 till 1985.  During these 15 years Wyeth painted and drew some 240 depictions of her, many of which portrayed Helga in the nude.  No one outside of the two knew about these works, not even Wyeth's wife.  The Helga series were revealed in the mid-1980s and a traveling show followed in 1987 originating at the National Gallery of Art, Washington, DC.**

Letting Her Hair Down may be one of the finest American portraits. Marvels include the light falling from the right window onto her flesh revealing the abundance of colors making up her skin tones, the luminescent strands of blond hair and her worker's hand with its unkept fingernails.  Wyeth's depiction with its tactile, three-dimensionality gives the figure its substance.

The show also has Wyeth's tempera Heat Lighting.  This painting along with the watercolors Winfields (first version of Heat Lightning) and Surf  present a nude female on her knees.  The figure is made up of Helga's body and the head of another model. As was Wyeth's custom, he would find a position of interest and explore it in a succession of works.  Also as his wont, he would combine Helga's body with the head of someone else - this was during the time his and Helga's relationship was covered up.  Sometimes he would turn Helga's body into that of a black female.  For Heat Lighting, he said he used the head of his friend Andy Davis' grandniece.  Andy Davis was part of Chadd Ford's African community.  Wyeth had longtime friends with some of its members and used them as models. 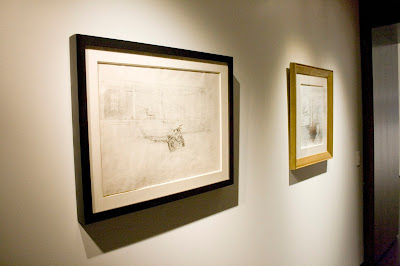 
The exhibit includes two drawings which are a reminder of Wyeth's talent as a draftsman.  The motorcycle in Jimmy's Porch (Study for the tempera "Drifting") is as elegant as anything can be.  Catch the show!