A Celebratory Union in Life and Art 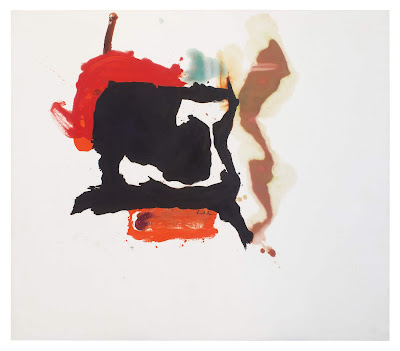 
Good marriages bring together each partner's strengths and enrich their lives.  The joint experience may create a mutual influence that could continue even after the marriage dissolves.  These ideas are brought out in the exhibition The Art of Marriage: Helen Frankenthal & Robert Motherwell at the Mnuchin Gallery, New York.

The artists met in 1956.  Motherwell was almost 43, married with two children.  Frankenthaler was 28 and single.  A serious relationship did not begin until a year later after Motherwell's marriage had ended. Motherwell and Frankenthaler were respected artists with their own distinctive way of making art.  He was well-known, the youngest member of the First Generation of Abstract Expressionists.  She, from a younger generation, was already recognized as a talented newcomer, represented by a gallery and a work acquired by the Museum of Modern Art.  They married in April, 1958. They became a golden couple with a cross-section of cultural luminaries as friends.  Their New York townhouse dinners with fine food, wine and diverse company were noteworthy.  Their marriage ended in 1971. 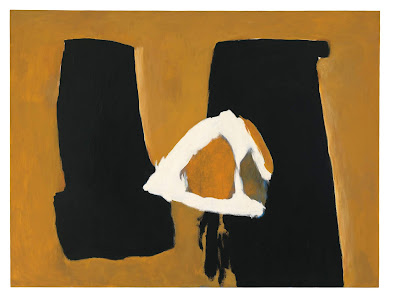 
The pair had come from similar affluent backgrounds. He was the son of the president of Wells Fargo Bank and she was the daughter of a New York State Supreme Court Judge.  The two were highly educated, well-traveled and exceedingly knowledgeable in the history of art. Both were focused on expressing emotions through art.  They were not interested in representing that which could be seen but they were rather interested in representing instinctive feelings.  They achieved their common pursuit in different ways. 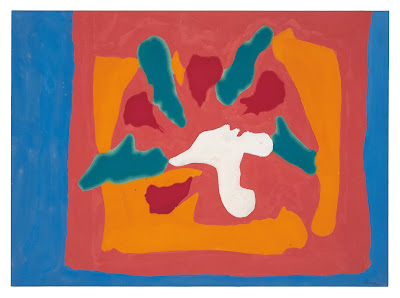 Motherwell worked in a gestural style, typically using a limited palette of earth tones and black.  Frankenthaler  with the whole range of colors, staining and soaking raw canvases with a variety of hues. Motherwell's forms were bold with verticals and ovals used extensively while Frankenthaler's approach was softer, open and lyrical. Motherwell worked in series with  innumerable permutations to motifs while maintaining the work's basic composition. Frankenthaler responded to individual experiences, a place or light for example.  If it appears that she has related works it is only that she kept on responding to a particular idea until she felt it was treated thoroughly. Frankenthaler never intended to repeat in variation a motif again and again.  Motherwell excelled in collage; she used the medium only briefly. 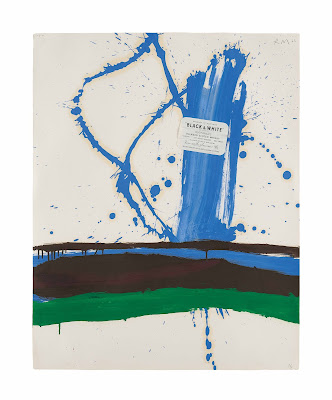 It is uncertain to what extent these two strongly individualistic artists affected each other.  It may be said after their marriage, Motherwell's work became cheerful.  His strokes appeared more energetic and looser.  His colors broadened with the use of bright hues and tones. His 1959 oil and charcoal on canvas California is a good illustration of this. Frankenthaler's painting became less transparent, denser with expanses of solid color.  She incorporated hues associated with her husband specifically ochre and black.  Take a look at her 1961 oil on canvas Black with Shadows.  As mentioned, she explored the medium of collage after the marriage perhaps because of her husband's interest. The exhibit presents some half dozen Motherwell collages and five by Frankenthaler.  The group makes for informative comparisons. Noteworthy is Frankthaler's large collage, approximately  7 x 3 1/2 feet, New Year Greeting, December 1959,  which the artist made after the couple returned from Europe.  It is on loan from a private collection as are most of the show's works - a compelling reason to see the exhibit before these pieces are returned. 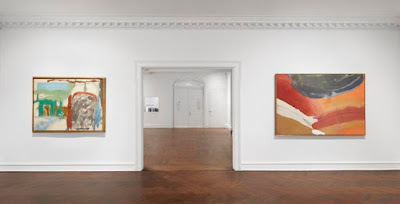 An added bonus of the exhibition are peripheral themes that arise such as Frankenthaler's use of oil versus acrylic paint on canvas. 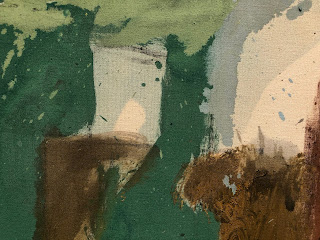 Some words about these mediums:  oil paint is slow drying and corrosive because of the oil utilized as binder and should be used on a prepared support, such as a primed canvas. Acrylic dries quickly, can be employed to achieve color transparencies and a watercolor semblance.  Acrylics can be easily thinned using water which seeps and spreads into the raw canvas. Acrylic maintains its color; oil paint yellows over time. 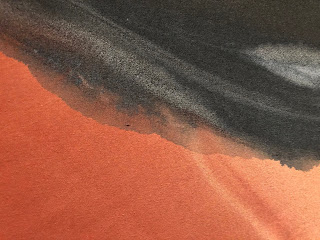 Motherwell's admiration for Henri Matisse (1869 - 1954), who he said was his favorite painter, is evident in several of the show's pieces. His 1969 oil and charcoal, Open No. 93:  In Medium Ultramarine Blue with Charcoal Line brings to mind Matisse's 1914 View of Notre Dame in New York's Museum of Modern Art (MoMA).  Frankenthaler recounted Motherwell claimed the chalky blue hue as his own. Matisse's 1952 works, the cut-outs and lithograph series Blue Nudes and The Swimming Pool cut-outs, as well as the surreal bathers of Pablo Picasso (1881 - 1973) could be the ancestors of the figurative form in Motherwell's 1962 Summertime in Italy, No. 28.  Motherwell's powerful red dominated The Studio of 1987 hawks back to the bright hues of Frankenthaler in addition to Matisse's  1911 The Red Studio. The latter and The Swimming Pool are also in MoMA.  The Studio was finished some 16 years after the artists' divorce. A case can be made that it shows the long lived interconnection of the two painters. 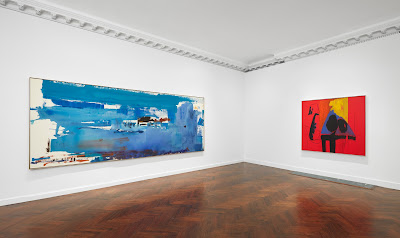 Frankenthaler's 1978 Blue Reach seems to acknowledge Motherwell by using his "claimed" blue and wide forceful areas of color.  The Studio and Blue Reach, installed adjacent to each other, form a touching ending to an exhibit which explores the period Frankenthaler and Motherwell spent together as wife and husband.  The union had ended but the aftereffects continued.

Posted by ArtWithHillary at 4:53 PM