Color and Emotion Define an Artist and an Age 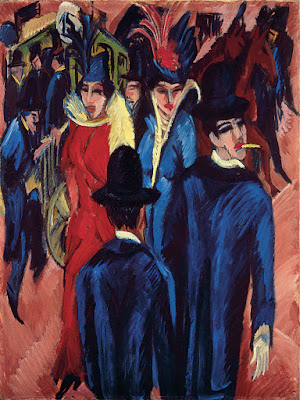 If an artist's work and life could encapsulate a period, the artist would be Ernst Ludwig Kirchner (1880 - 1938).  This is best presented in the exhibition Ernst Ludwig Kirchner  at the Neue Galerie New York. Over 90 paintings, works on paper, sketchbooks, photographs, tapestries and a sculpture are organized into five sections. The first four cover major periods in the artist's life.  These are Dresden (1905-11), Berlin (1911-14), the War Years (1914-18) and Davos (1918-38). The fifth section is devoted to the artist's prints.  Kirchner's experiments and originality in woodcuts and monotypes single him out as a master printmaker.

The Neue Galerie's curators, Jill Lloyd, distinguished Expressionism scholar and Janis Staggs, Director of Curatorial and Manager of Publications for the museum, as well as the exhibition designer Peter de Kimpe, have put together an exemplary survey which is enriched by the use of wall colors related to the artist's palette. 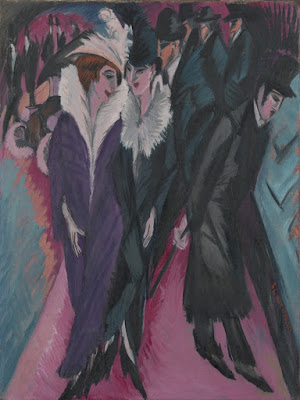 There are many treats in the show not the least of which is the pairing of the Neue Galerie's Berlin Street Scene to the painting of the same subject from the Museum of Modern Art (MoMA).  The two works have not been seen together since the MoMA's 2008 exhibition Kirchner and the Berlin Street.  The paintings generate more of an emotional response against  the green colored wall at the Neue Galerie than the pale gray background that they had at the MoMA.  The walls in the Neue Galerie exhibit's Berlin room are green and pink which pick up the dominant colors in the two street scene canvases.  The two paintings were separated by the much larger work, Potsdamen Platz in the MoMA's installation.  Here they are hung next to one another which makes for an easy comparison.

The Berlin street scenes are considered the highlights of the artist's career.  He had moved from Dresden to Berlin in 1911.  At the time, Berlin was the capital and largest city in Germany as well as the third largest city in Europe.  Kirchner set upon recording what it was like to experience living in a metropolis.  The crowded streets illuminated by electric lights fascinated him and were captured in the paintings' compressed, accordion-like composition.  Fashionable prostitutes mingle with top-hatted prospective clients.  Their colorful garb contrasts with dark-suited men.  Streets tilt upward and fan out at the top of the canvas toward the edges.  Figures appear to be streaming down into the viewer's space.

In the Neue Galerie painting the cigarette smoking man at the right may be a self-portrait because Kirchner portrayed himself often with a cigarette. The man in the foreground with his back to the viewer may be another version of the cigarette smoking man.  The gentleman at the right in the MoMA painting looks down at a lit shop window.  He may be seeing the items for sale or the reflections of the coquettes behind him.  Bold colors abound.  They define Kirchner's work throughout his career.  He was the supreme colorist and called himself “Farbenmensch” (color man) and considered the use of color his art's distinguishing characteristic. Modernity and contemporary life were his focus.  The out-in-the-open prostitutes were just another aspect of the urban environment.  Prostitution was thought of differently from the way we think of it today.  The occupation was not censured. Prostitutes were appreciated and looked upon as liberated women who maintained their independence.

There are three sketchbooks in the exhibit.  One each placed in the Dresden, Berlin and Davos sections.  All the sketchbooks have been digitalized allowing visitors to see each and every book page. The electronic versions are displayed next to the actual books.  This makes for a delightful journey of discovery, relating the drawings to the works on view.  Don't miss swiping through them.

The sketchbook next to the two Berlin street paintings is opened at a drawing of the head of a woman wearing a hat surrounded by cursory drawn figures, Sketchbook 28, Fol. 21. The woman closely resembles the full-lipped strumpet dressed in red in the Neue Galerie's street painting.  The book contains more sketches of figures, streets and buildings.  A series of some 20 drawings connected to the cityscape in the 1912 painting Red Elisabeth Canal Bank (Canal with Bridge), also in the Berlin room, attests to Kirchner's absorption with this scene. 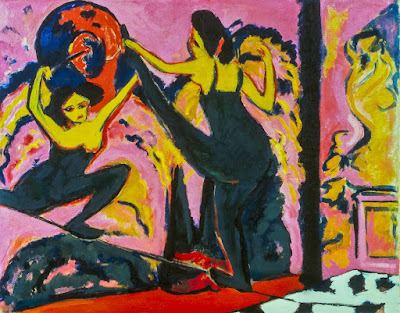 In 1901 Kirchner began studying architecture in college but his interest lay in painting.  Around 1903 he was working on his first paintings. He took in what his contemporaries were doing while embracing his artistic inheritance. When looking at Kirchner's work, one can see the effects of Post-impressionist artists such as Paul Cézanne (1839 - 1906), Paul Gauguin (1848 - 1903), Vincent van Gogh (1853 - 1890), the Fauvists, especially Henri Matisse (1869 - 1954) and the Norwegian Edvard Munch (1863 - 1944).  Of the older artists, Albrecht Dürer (1471–1528) and Rembrandt van Rijn (1606 - 1669) were his favorites.  Tightrope Walk, an early canvas, illustrates his ability to take from others, transform what he has learned and move ahead  to make something uniquely his own.

He was co-founder of the artist group Die Brücke (The Bridge), formed in Dresden in 1905.  Kirchner and his fellow group members sought a new morality in painting and in life.  They wanted to break away from middle class social norms, freeing German art from the prevalent academic style and bridging the past - Germany's artistic history - to the future in an expressive form of painting. The group sought to shock viewers into feeling an intense emotion through color and pictorial distortion. Their lives were equally unorthodox advocating open sexual freedom and nudity.  The artists' girlfriends posed as models frequently in the nude.  Depictions of unclothed women convey a frank seductive sensuality. 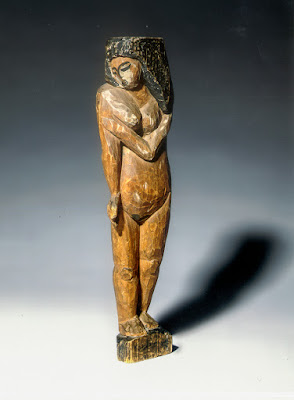 Kirchner began to sculpt in wood in 1909.  The only sculpture in the show, Standing Girl, Caryatid, is a study in voluptuous eroticism.  The carving demonstrates Kirchner's appreciation of African art, folk art and Gauguin's work.  He also designed a poster for a Gauguin exhibition in Dresden in 191o.

The artist felt alienated and alone during his Berlin years.  Die Brücke broke up in 1913.    Discord broke out among nations and was leading up to World War I.  Germany entered into the conflict in August 1914. Afraid of active duty at the front, Kirchner volunteered for the mounted artillery. In September 1915, while in training, Kirchner had a nervous and physical breakdown.  He was admitted to a sanatorium for treatment. This marked the beginning of three years of recovery in and out of sanatoriums.  He sought help for his depression and dependence on alcohol, morphine and sleeping pills. 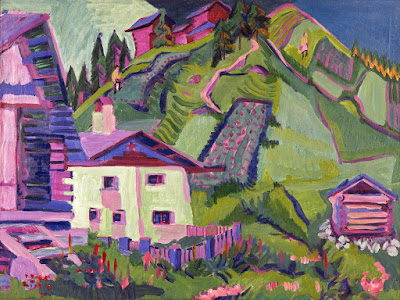 Kirchner visited Davos, Switzerland, for the first time in 1917.  He remained under medical care there. The air, light and Alpine scenery purportedly had health-inducing qualities. Davos becomes his primary residence for the rest of his life.

Inspired by the environment, Kirchner painted sublime landscapes, took up the designing of textiles, two of which are in the exhibit, and continued to make prints, carvings and photographs. The latter he had taken up in 1909, the only Expressionist artist to do so.  He never stopped taking pictures and exploring the medium throughout his life. Some of his photographs are reproduced in the exhibit such as his self portrait in uniform and views of his Davos homes.

The artist called his late painting manner, his "tapestry style" where broad areas of color interlaced to create forms.  No doubt this style related to his involvement with tapestry making.  His first collaborated effort took place in 1922.  In total 24 tapestries were produced using his designs.

Kirchner had become a highly successful artist with numerous exhibits throughout Germany, Switzerland, Europe and the United States. These showcases included the 1913 New York Armory show, the German Pavilion in the 1928 Venice Biennale and the Museum of Modern Art's 1931 German Painting and Sculpture exhibition. Kirchner retrospectives took place, the largest in 1933 in Bern, Switzerland. The Detroit Institute of Arts mounted a solo exhibit of his work in 1937 which then traveled to a gallery in New York. Meanwhile, the political situation worsened in Germany.  The Nazis labeled his art degenerate and removed more than 600 works from German museums.  Over 30 of his compositions were included in the Degenerate Art show held in Munich in 1937. Many of the seized pieces were destroyed.  In the same year the artist was expelled from the prestigious Prussian Academy of Arts.

In March 1938 Germany annexed Austria and troops were stationed at the Swiss border near Davos.  Apparently the stress of world events was too much for him.  The artist fatally shot himself on June 15, 1938. Kirchner was 58 years old.  His life and art witnessed major upheavals in the socio-political and artistic realms.

Much appreciation to the Neue Galerie for making the depth and breadth of Kirchner's accomplishments accessible and through them the events of the early twentieth century.