The Multitalented David Wojnarowicz Part I 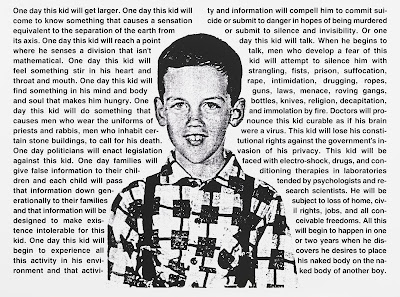 David Wojnarowicz (1954 - 1992) was a poet, writer, photographer, painter, sculptor, printmaker, performance and installation artist, filmmaker and activist.  He started a literary magazine with a writer friend and also a post-punk band with a couple of other artists.  He performed, not with a musical instrument but by playing back sounds on a tape recorder that he had recorded.  He accomplished all this in his life of 37 years. Wojnarowicz died of AIDS related complications in 1992.  His contributions to the art world and the LGBTQ community are considerable. 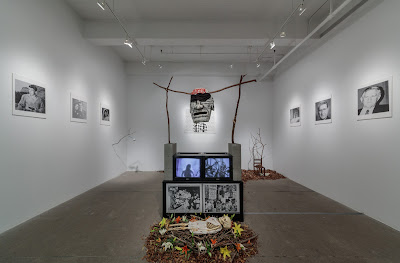 Three exhibitions devoted to Wojnarowicz can be seen currently in New York. The Whitney Museum of American Art has a comprehensive retrospective, David Wojnarowicz: History Keeps Me Awake at Night, covering all aspects of the artist's career with the exception of his installation art.  P•P•O•W, Wojnarowicz's long-term gallery, presents Soon All This Will be Picturesque Ruins: The Installations of David Wojnarowicz with four of the artist's installations and his film You Killed Me First as well as materials related to these works. At New York University's Mamdouha Bobst Gallery, Elmer Holmes Bobst Library, the exhibit The Unflinching Eye: The Symbols of David Wojnarowicz uses archival photographs, journals, papers, books and more from the Fales Library & Special Collections David Wojnarowicz Papers to explicate symbols Wojnarowicz used throughout his career. These shows connect with and cross-fertilize each other.  To do justice to Wojnarowicz's extensive art and activism, this post will be in two parts, July and August 2018. 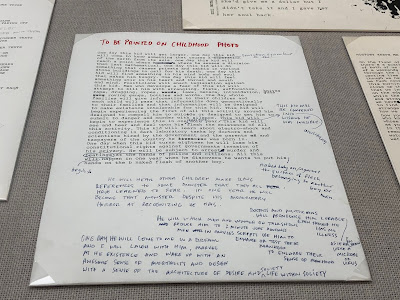 The artist's biography is not easy to recount since Wojnarowicz gave different accounts of his life at various times.  What is definitively known is that his childhood was awful.  He and his two siblings were verbally and physically abused.  Mistreatments ran the gamut from being locked in an attic for hours without bathroom facilities, beatings, a placement in a boarding home where more abuse took place, a kidnapping by their father and more or less abandonment by their mother.

Wojnarowicz's father, from Detroit, was a seaman for passenger liners. He met his wife on a trip to Australia.  She was ten years his junior.  His occupation kept him away from the family for months which probably was best for he drank and would get violent with the children and his wife.  He had a tremendous ability to inflict pain.  He killed the children's pet rabbit and fed it to them making them eat it all.  Two years after Wojnarowicz was born, his parents separated.  A final divorce came a year later giving custody to his mother.  The children ended up living with the father and his second wife in New Jersey under strict rules and regulations. Eventually returning to their natural mother who was living in New York City, Wojnarowicz outlasted his brother and sister.   They were thrown out by their mother for disobeying her. Wojnarowicz meanwhile entered High School of Music and Art. He had been a good student who skipped a grade but was not happy in high school and his grades suffered. During this period, he had an affair with a young man confirming his sexual proclivity.  He began to turn tricks, hustling and ended up living on the street. In time, he took on menial jobs, obtained his high school diploma, got involved with poetry and the East Village art scene. There, in 1980, he met the photographer Peter Hujar (1934 - 1987) who became his lover, friend and mentor.  Hujar encouraged Wojnarowicz to paint and created a supportive environment for the young artist. 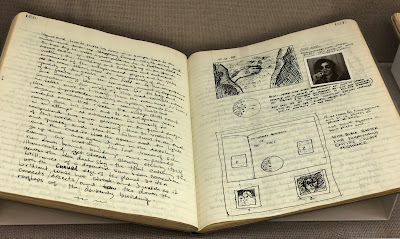 Poetry, writing and photography occupied Wojnarowicz's early artistic efforts.  He was a voracious reader and prolific writer keeping diaries almost his entire life.  There are some 31 in extant dating from 1971 until 1991.  Over two dozen are on view at the Mamdouha Bobst Gallery and three can be seen in the Whitney Museum retrospective. Written in school-type lined notebooks, words seem to pour out of him propelling the reader to continue.  The writing is personal yet universal in affect. He may be writing about his particular response or thoughts but the feelings elicited are common.  Reading Wojnarowicz may cause "aha moments," sudden insights or comprehension.  This is true for all his output whether prints, paintings or installations. 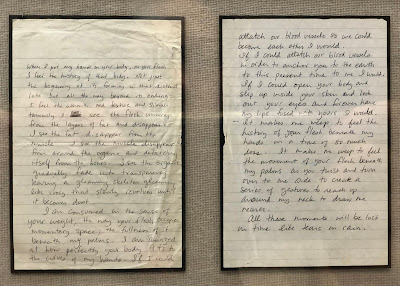 Take his response to Hujar's death in the 1987 manuscript When I Put My Hand on Your Body.  He writes about the loss of touching his beloved and how the memory of the physical fades with time.  This was Wojnarowicz's first confrontation with his feelings of death.  In 1990 he used a slightly revised version in one of his prints, Untitled (When I Put My Hands on Your Body). 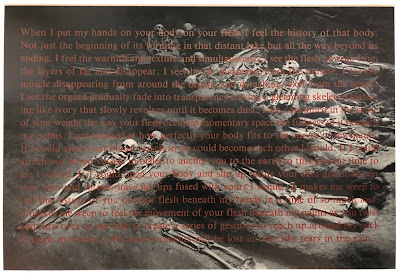 David Wojnarowicz (1954-1992), Untitled (When I Put My Hands on Your Body), 1990,
gelatin silver print with silkscreened text,
26 × 38 in. (66 × 96.5 cm), edition of 3.
Collection of Eric Ceputis and David W. Williams,
promised gift to the Art Insititute of Chicago
Installation view from the exhibition David Wojnarowicz:
History Keeps Me Awake at Night
July 13 - September 30, 2018
Whitney Museum of American Art
Photo:  Hillary Ganton

In this work, the words are printed in red over a black and white photograph of skeletons in an excavated Native American burial site. Wojnarowicz took the picture in 1989 in an Illinois museum (now closed) that was on the site of an ancient Indigenous community. The changes in the text's wording and punctuation marks from the earlier version are small but increase the essay's flow.  The last line which in an earlier manuscript reads "All these moments will be lost in time like tears in rain"  is modified to "All these moments will be lost in time like tears in the rain."  The addition of the definite article "the" seems minor but substantially enhances the sentence's impact. Yet, in a 1992 reading of his own work for a benefit at the Drawing Center, New York, he recited this text but eliminated the "the" in the last line. You can hear his presentation of this text along with another short piece and excerpts from two of his books at the Whitney Museum where a gallery is devoted to his readings. 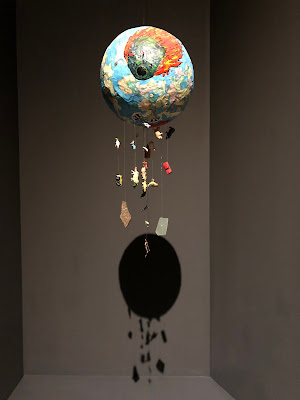 Throughout his life Wojnarowicz used particular imagery over and over again in different contexts.  Maps, money and frogs are a few of his recurring motifs.  Each had a meaning to him as an outsider in what he called a "pre-invented" world.  The maps and money represents both expansion of freedom and boundaries to it. Maps indicate the world open to exploration but also restrictions set by divisions of territories. Similarly, money  could provide economic freedom but without it, cause constraints on autonomy.  The frog symbolizes an outsider since as an amphibian it neither belongs fully to land or water. 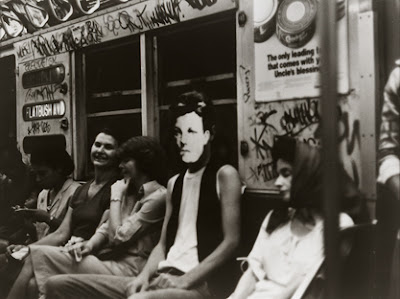 In the late 1970's he began a series of photographs taken in New York City of men wearing a mask of the French poet Arthur Rimbaud (1854 - 1891). Rimbaud had special significance for Wojnarowicz who identified with the poet's homosexuality and unconventional life. Rimbaud's father was eleven years older than his mother.  He was home infrequently due to his military career and abandoned the family when Rimbaud was six.  The poet's formal education ended when he was sixteen.  He ran away from home to Paris, and at times lived on the street. Coincidentally, Rimbaud also died when he was 37 years old.

The Rimbaud images convey not only the connection between Wojnarowicz and the poet but also the resemblance between nineteenth-century Paris and New York City of the 1970s as centers of artistic creativity and bohemianism.   Many consider these photos Wojnarowicz's first major art project.  Rimbaud photographs are in both the Whitney Museum and Bobst Gallery shows.  The Whitney in addition has on display one of the masks used in the series complete with the rubber band used to keep it on the model's face and eye holes in the cardstock which appear to be burnt out by a lighted cigarette. The mask, by the way, is from New York University's Fales Library & Special Collections.

Untitled (One day this kid . . .), is probably the artist's most famous work.  It shows a blown-up photograph of Wojnarowicz taken when he was about eight years old surrounded by text describing the homophobic reactions the child would be subject to in the future. The boy is innocent-looking, freckle-faced and smiling.  The picture looks like a typical, innocuous school photograph parents would keep of the children in their wallets.  The pleasantness and geniality of the picture is in stark contrast to the harrowing text.  The words express what could and would happen to a boy who choose another male as his lover. The piece was eventually turned into a poster and postcards. There was also a German edition with German text and in 2012, it was reproduced posthumously in a edition of 100 as a fundraiser for Printed Matter, Inc.  The image still resonates today.

The work was originally made for the artist's 1990 sole survey during his life time at the University Galleries of Illinois State University. It was not included in the show but was reproduced in a full-page plate in the exhibition's catalogue and appeared on announcement cards for subsequent venues.  Wojnarowicz used it as a stand alone artwork in his installation  America: Heads of Family/Heads of State, constructed for a 1990 exhibition at the New Museum of Contemporary Art, New York and, and presently recreated at P•P•O•W.

Untitled (One day this kid . . .) is hung on the back wall of the room-size installation that includes unframed photographs of politicians and the artist's family, two TV monitors, a papier-mâché head suspended from the center of the ceiling, a child's skeleton, and other objects placed on the floor.  The total evokes a rage against those in power who were indifferent to the AIDS crisis and sorrow for all those that suffer because of their sexual orientation.

Posted by ArtWithHillary at 4:07 PM