The Changing Nature Of Landscapes 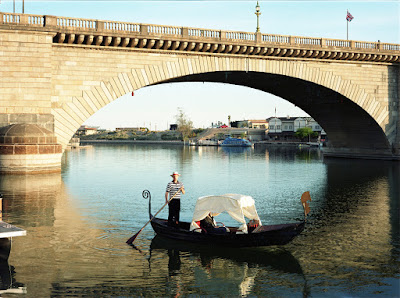 What is the sublime in nature?  The exhibition Landscapes after Ruskin:  Redefining the Sublime, at New York University's Grey Art Gallery, addresses this question.  With some 60 artworks by over 45 artists, from the Hall Art Foundation and Hall Collection in Reading, Vermont, the artist-curator Joel Sternfeld makes the case that contemporary landscapes' sense of the sublime is quite different from that of the nineteenth-century.  Paintings, sculptures, photography, videos are effectively installed to make this point. 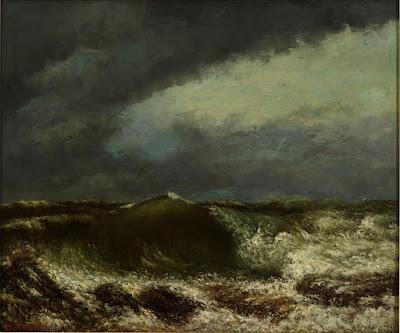 For the later nineteenth-century, as articulated by the art critic, artist and patron John Ruskin (1819 - 1900), the principal role of the artist was to capture nature as it is.  This was exemplified, according to Ruskin, by the artist J.M.W. Turner (1755 - 1851).  Turner painted the awesomeness of our natural environment that not only inspired admiration and gave pleasure but also engendered fear - fear of nature's power and of being overwhelmed by natural forces.  This was how the Victorians understood the sublime and is illustrated in the exhibit by Gustave Courbet's La vague (The Wave), c. 1869.

The painting depicts a windswept, frothing sea under an ominous dark clouded sky.  The wild water scene is gripping and frightening.  Man is no where to be seen.  Nature gives cause for concern. 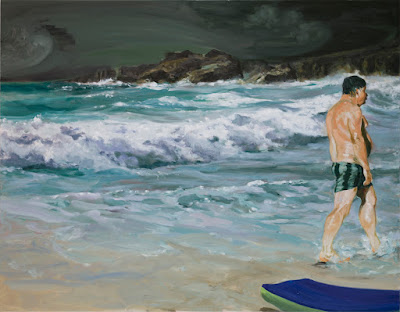 About 145 years later, Eric Fischl painted a seascape with an approaching storm.  A lone swim-suit clad man walks along the beach where the sand meets the sea as the tide comes in.  He appears to be oblivious to the unsettled weather.  In the foreground, a surfing bodyboard has been left by its user.  Compared to the Courbet painting, nature's power has been relegated to a secondary role.  Man is dominant and leaves behind possessions with a  disregard for an unspoiled environment. 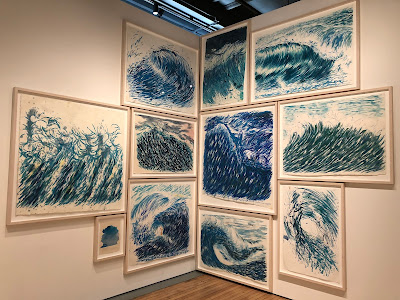 Another look at waves are provided by Raymond Pettibon.  His suite of ink and water color   swells and surf captures the sublimity of a variety of seas. Forceful yet gorgeous and just a bit scary, Pettiibon's renderings conjure up a vision of never-ending movement. 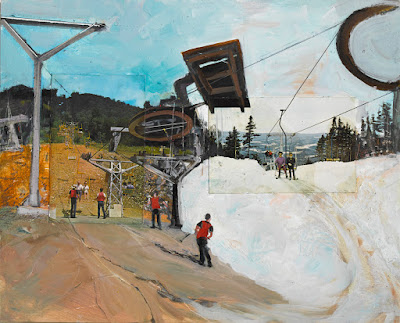 The panel Season's Greetings by the photographer and painter William Wegman, seamlessly incorporates two souvenir postcards in a representation of a ski resort.  One card is a winter photograph of the recreation spot;  the other is a shot of the same area in the summer.

Although  the image is bifurcated by seasons, it appears to be one continuous landscape.  Both sides show vacationers in two-seater chairlifts.  On the right snowy half, lift riders face the viewer.  The nearest pair is apparently about to ski off their perch. Tracks in the foreground left by previous disembarked passengers mar the pristine snow.

In the warm weather scene on the left, the chairlift take pairs of tourists in summer garb up and down the mountain.  Below the apparatus, resort workers are readied to assist the riders getting on and off the chairs.  Curiously, the workers cast shadows resembling skis.  Alas, the melted snow has exposed evidence of man's environmental threat.  The ground on the hill slope is littered with waste. 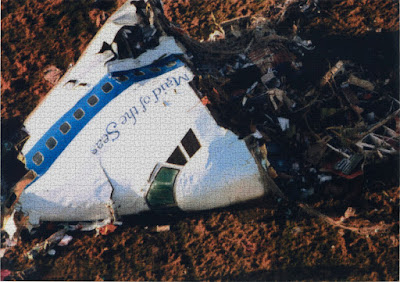 
The artist Christoph Draeger prints on huge jigsaw puzzles images of natural and man-made disasters.  One of his two works in the show portrays the forward section of the wreckage of Pan Am Flight 103, a regularly scheduled transatlantic flight, felled by a terrorist bomb in 1988.  The other one depicts a 1992 aerial photograph of the destruction in Florida caused by Hurricane Andrew. 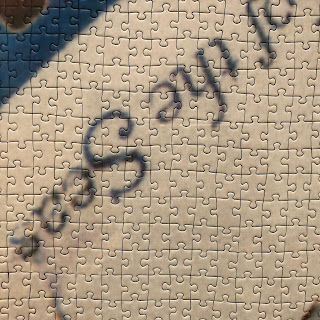 Draeger combines a relaxing leisure pursuit with catastrophe alluding to the idea that a devastation for some could be pleasurable for others. 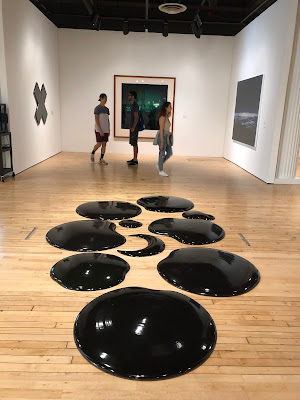 Abstract and semi-abstract artworks also communicate issues of concern. Ai Weiwei's take on oil spills in the guise of floor puddles of Chinese-made porcelain combine environmental pollution with run-away consumerism.  This particular type of ceramic was highly valued for centuries and enormous quantities were exported worldwide. Florian Maier-Aichen takes a photograph of Los Angeles from the Mount Wilson Observatory some 15 miles away from the city and about 5,700 feet above sea level.  From this angle, Los Angeles could be any sprawling metropolis.  She makes the point that cities have become undistinguished, gobbling up more and more space and resources of our planet.  Mary Corse's reflective abstraction comments on the way objects interact with their environment.  Her dark, shiny, dark glazed ceramic mirrors reflect the surroundings along with the spectator looking at it.  Colors and patterns transform under changing light and viewpoints. 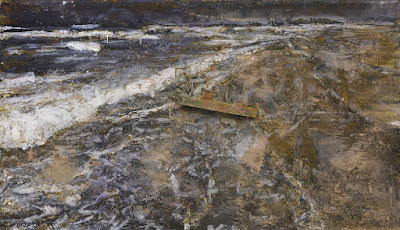 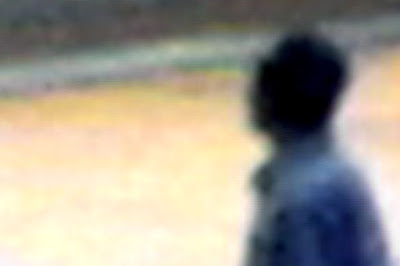 Other artists that may be under the art world radar screen but should be known include Carols Motta whose grainy prints of visitors to Ground Zero are documents of haunting reverence.  In addition, Serban Savu (1978 -) who paints poetic scenes of land, sea and cityscapes under hazy curtains of blues and grays.  They may be small in scale but not in thought.  And, don't miss Tony Matelli's tour de force hyperrealistic sculptures of greenery. These "weeds" pop up from under walls offering amusement, but also sadness as closer inspection reveal their withering.  As such, they become momento mori. 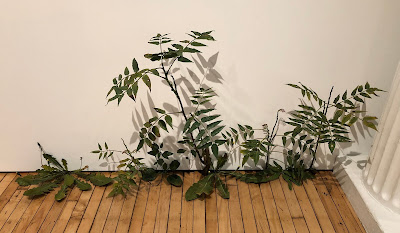 The exhibit's most complex piece is Sternfeld's film London Bridge which takes a look at a day on Lake Havasu in Arizona. 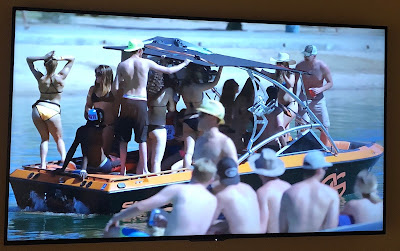 The lake was transformed by a billionaire real-estate developer into the second most popular tourist attraction in Arizona by importing a 1830 London bridge.   Sternfeld  focuses on an American dressed up in a traditional Venetian boating costume who maneuvers a gondolier about the lake.  He sings arias in Italian whether alone or with customers in an attempt to recreate the sublime serenity of a leisurely ride along Venice's Grand Canal.  His effort is thwarted by motorboats crowding the waterways and beer-drinking partyers on boats and the shore, dancing to disco music and carousing.  The work captures moments of colliding cultures and merits viewers' attention for all of its 16 plus minutes and more.

The artist, writer, curator Chris Wiley's essay in the exhibition's catalogue reflects on what he calls the "innocent"  sublime of Ruskin and the "calamitous" sublime that came after it.  I can think of no more apt description of what this exhibit is about.  Go see it.

Posted by ArtWithHillary at 3:26 PM