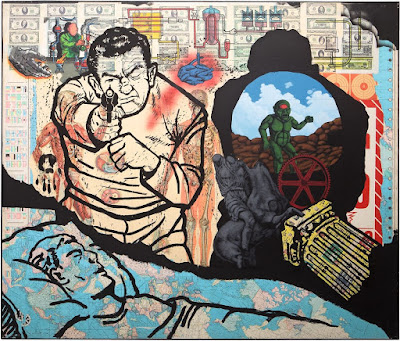 This is the second part of a two part blog post concerning the artist David Wojnarowicz (1954 - 1992) and the three concurrent New York City exhibitions on his work.  For Part I see ArtWithHillary July 2018. To begin, a brief review: The Whitney Museum of American Art has a retrospective, David Wojnarowicz: History Keeps Me Awake at Night, named after one of the artist's paintings.  The exhibit at P•P•O•W, Soon All This Will be Picturesque Ruins:  The Installations of David Wojnarowicz, displays reconfigurations of four of Wojnarowicz's installations as well as his film You Killed Me First and materials related to these works.  The Unflinching Eye: The Symbols of David Wojnarowicz, the show at New York University's Mamdouha Bobst Gallery, Elmer Holmes Bobst Library presents photographs, journals, papers, books, posters and more from the university's Fales Library & Special Collections David Wojnarowicz Papers. Taken together the exhibits offer an in-depth view of every aspect of the artist's career. 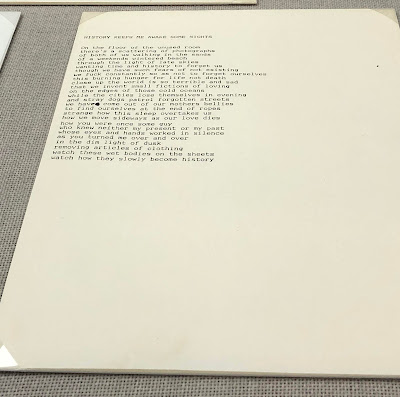 From poems, essays, books to photographs, paintings, music, publishing, performance and installation art and political activism, the self-educated, relatively self-taught Wojnarowicz created a body of work that belies his short life.  His awesome talents were profoundly influential to generations of artists as well as LGBTQ activism and politics.

The painting History Keeps Me Awake at Night (For Rilo Chmielorz) deals with fear and violence faced by gay men in an inhospitable,  frightening society.   For Rilo Chmielorz refers to Rilo Chmielorz (1954 - ), a multi-media artist who was a close friend of Wojnarowicz and part of the East Village art scene in the 1980s.  The imagery in the work includes bodies, a gun, a world map, factory parts, money, newspaper advertisements, a broken classical column and a damaged equestrian statue.  They refer to a world falling apart, like a declining ancient civilization.   The fear, hostility and sadness that the painting evokes is similar to the feelings elicited by Wojnarowicz's poem History Keeps Me Awake Some Nights.  The lines "close up the world is so terrible and sad" and "stray dogs patrol forgotten streets" convey a devastated environment. The only antidote is loving and being close to someone.  Alas, even this ultimately does not work and all become history. 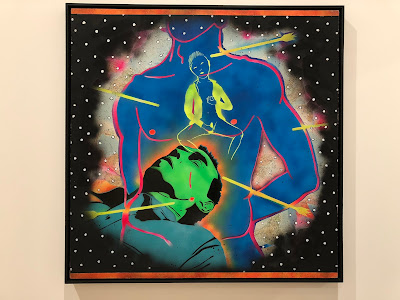 Encouraged by Peter Hujar (1934 - 1987), an important and influential downtown New York City photographer, his friend, mentor and, at one time lover, Wojnarowicz began to paint in the early eighties. Peter Hujar Dreaming /Yukio Mishima: Saint Sebastian conjures up dreamlike homoerotic imagery.  Hujar lies with eyes closed. His mouth appears to be slightly open as if in deep slumber.  Above and behind him are the outlines of a muscular torso pierced by arrows, a representation of Saint Sebastian.  The saint, a Christian martyr, was tied up and shot by arrows because of his adherence to the Christian faith.  Actually, he did not die from the arrow attack but was saved by a pious lady who nursed him back to health.  Eventually, he was executed.  Depicted as a handsome male almost nude, the saint became associated with the gay community in the late nineteenth-century. He is considered the earliest male "pin-up."

In Wojnarowicz's painting a small Asian male pleasuring himself floats on top of the saint's chest.  He embodies the Japanese author Yukio Mishima (1925 - 1970), a professed homosexual.  Mishima describes in his book Confessions of a Mask how he had his first erection and ejaculation while looking at the painting of St. Sebastian by Guido Reni (1575 - 1642) in the Palazzo Rosso, Genoa. The Reni painting was also a favorite of the homosexual Irish poet and playwright Oscar Wilde (1854 - 1900).

A cloud-like nimbus encircles the figures in the Peter Hujar Dreaming painting through which are barely discernible maps.  In Wojnarowicz's iconography, maps can allude to both society's orderliness as well as the arbitrary separation of domains; and, when these maps are reconfigured or cut up, they imply a world in chaos and confusion.  A dark background surrounding the nimbus completes the painting while a sprinkling of white dots punctuate the surface as if  perforated by arrow shots. 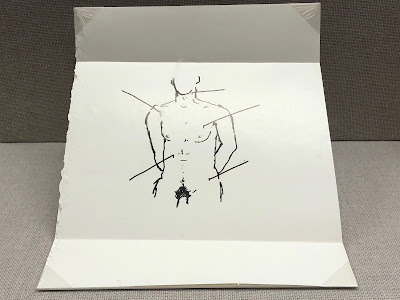 A journal drawing of a male nude torso on view at New York University's Mamdouha Bobst Gallery is similar to the painting's saint. The drawing, like the painting, has the figure's hands tied behind his back and his body wounded  by five arrows.  Saint Sebastian was also considered the patron saint against the plague and disease.  As a protector for those suffering from illness, he connects even more to the gay community ravaged by AIDS. 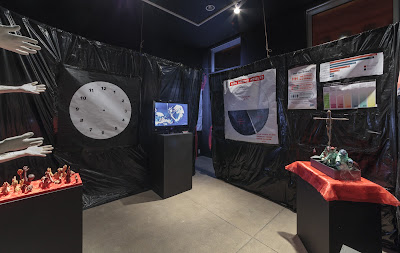 In the late 1980s Wojnarowicz channeled his art to focus attention on HIV/AIDS advocacy.  Hujar had died from AIDS and Wojnarowicz was diagnosed HIV positive.  In 1990 Wojnarowicz collaborated with the artists Paul Marcus (1953 -) and his wife Susan Pyzow (1955 - ) in a formidable installation about the then current state of the AIDS crisis. The installation was called La Lazaretto, a word indicating a place where the sick are kept in quarantine.  The work was installed at P•P•O•W, which, at the time, represented Marcus and Wojanrowicz and currently has the reconfigured installation. 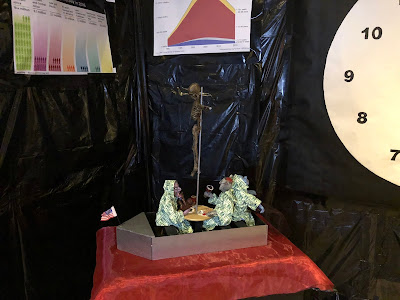 The original installation had four parts:  an outer maze with walls covered with black plastic trash bags like body bags and quotes from those inflicted with AIDS; a bedroom of an AIDS patient with medical paraphernalia and a television playing mindless commercial programming; a hallway lined with arms reaching out with tattooed numbers on each connecting those stricken with the illness to concentration camp victims and people seen as abhorrent; and, a room with a small boat with papier-mâché figures representing Cardinal O’Connor (1920–2000), Senator Jesse Helms (1921–2008), and President George H.W. Bush (1924–).  The three were singled out for their opposition to safer-sex education, lack of commitment to the epidemic and discrimination against homosexuals.  The boat floated in a material red sea filled with half-submerged figures, toys and block letters spelling out names. Exiting the labyrinth was a room filled with AIDS information including materials visitors could take with them. The recreation combines different parts of the 1990 work but nevertheless gives a unforgettable, haunting experience.

Although Wojnarowicz's subject matter revolved around "queerness," the sense of being an outsider and the politics of a health disaster which plagued a populace ignored and rejected by mainstream society, his work speaks about universal sentiments of acceptance, passion and caring.


In a 1988 interview Wojnarowicz explained that he was compelled to make things in order to make sense of his life and feel relieved about the experience of living and the experience of this world.  The exhibitions on his works make his words palpable.  Go see them.

Posted by ArtWithHillary at 9:20 AM