How The Twains Have Met 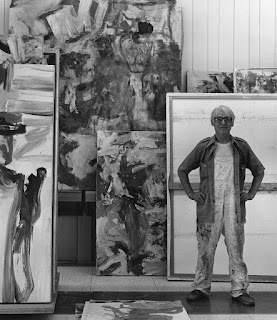 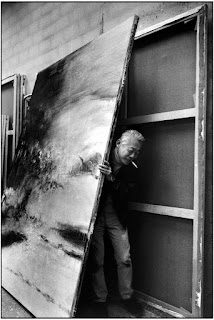 William de Kooning (1904 - 1997) and Zao Wou-Ki (1920 - 2013) never met during their lifetimes.  One, Dutch born, made his home in New York; the other, Chinese born, made Paris his home. They meet now in an exhibition at the Lévy Gorvy Gallery.*  This is the first exhibit for the newly formed gallery and the first presentation of paintings by these artists in one show.  The paintings invite contemplation not only about different formulations of abstract art but also about what abstract art can convey. 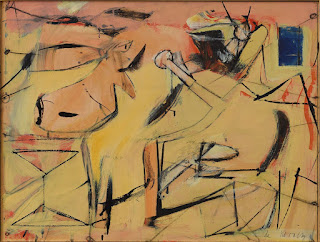 Twenty paintings, including five museum loans, are handsomely installed on three floors of the gallery's building.  Two early works, de Kooning's Sail Cloth from 1949 and Zao's Untitled  from the same year, set the stage for the Dutch-American and Chinese-French dialogue.   Both artists creating their own expression of landscape art. 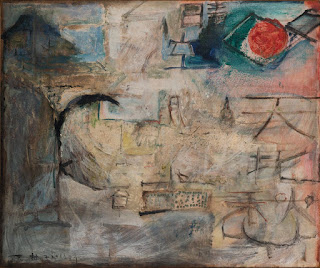 Zao came out of a tradition of Chinese painting and Eastern calligraphy but was highly  affected by modern masters such as Cezanne, Matisse, and Picasso.  He owes much to Paul Klee's inventive pictorial language with its emphasis on drawing and color relations. 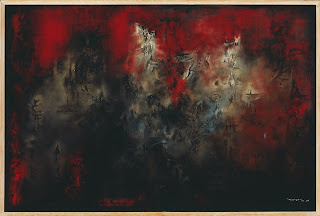 In works like Montagne déchirée (shattered mountain), Zao transports viewers to distant landscapes of mists and mountains not unlike the landscapes of the great Song period paintings.  Calligraphic surface strokes evoke Chinese characters as well as small figures and vessels in the distant haze.

Zao once said, "I like people to be able to stroll in my works as I do when creating them."  His canvases do evoke a sense of such depth that strolling in them may be possible.  Moreover, they impart a feeling of swimming in shimmering or turbulent waters.  Zao's good friend the poet, writer and painter Henri Michaux made the sea/water/waves an important aspect of his poetry.  In his 1935 collection La nuit remue (The night is stirring) swimming is likened to freedom.  In Laziness Michaux writes about the soul loving to swim - leaving the body to swim as an act of liberation.  He speaks about the waters rising and falling - losing the self as the ground "seems to fall away under your feet."  Take a look at Zao's 1956 La nuit remue (the night is stirring), named, no doubt, with his friend's poems in mind. Sensations of being lost in a watery abyss fluctuate with impressions of a dizzying foreign landscape while black, linear text-like marks return the visitor to the surface. 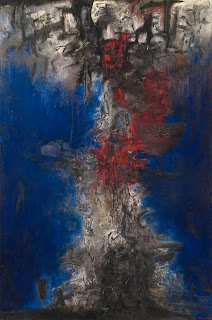 Paintings like these connect Zao to Peter Paul Rubens' rich oils such as Rubens' Hero and Leander paintings.**  When Zao uses a sunnier palate, such as his 1976 05-03-76***, links to the seascapes of J. M. W. Turner predominate.

De Kooning's oils also look back to Rubens taking more of the seventeenth-century artist's action-packed nature along with his painterly tactility and sensuality. 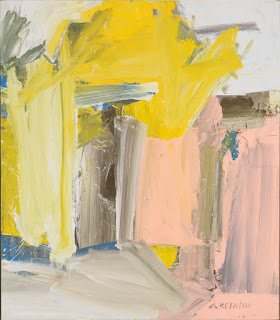 The artist's Dutch heritage is evidenced in works like the Whitney Museum of American Art's Door to the River or the Hirschhorn Museum and Sculpture Garden's Untitled.  A door,  house, tree, grey sky or river may be discerned as the scene brings to mind landscapes of the seventeenth-century  Golden Age of Dutch painting. 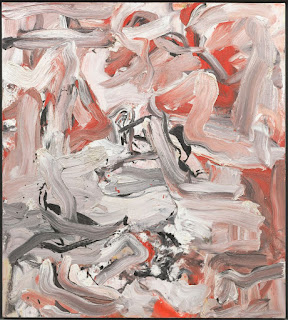 For de Kooning, however, landscape mostly evolved from his paintings of women.  He said, "The landscape is in the Woman and there is Woman in the landscape."  The fleshy quality to the artist's paint - color and texture - conjures imagery of the female nude.  As his abstract landscapes developed, its ties to the female body become less and less clear.  Movement and the sense of touch is never lost.

Form and formless, figurative and abstraction, always play out in de Kooning's work.   As such, Zao may be considered the more abstract of the two painters.  Wait.  This conclusion is perhaps the result of a Western sensibility.  An Eastener's response may find the de Koonings' work more abstract.

Allow this writer to digress and address those readers who question abstract painting's ability to mean or convey anything.  Think of music, which is probably the most abstract of art, non-narrative dance or architecture.  Without words or palpable representation, these art forms are capable of communicating a variety of feelings and experiences.  Musical notes, melodies, harmonies and tempos can elicit from listeners at times sadness or happiness or triumph or excitement. Music may cause a recall of an event not formerly thought of and/or induce a sense of well-being or discord.  Non-narrative dance, or dance without a story line, is also able to bring forth many emotions.  Joy, sorrow and even humor can be expressed by various footwork, body bends, gestures, patterns and repetitions.  In a similar way, a building's configuration of verticals, horizontals, volumes, colors and apertures can communicate cheerfulness, comfort, unease or power.  Such is also the case for abstract painting.  It is expressive even in its renouncing the depiction of reality.  People can and do respond.  With lines, colors, textures and compositional variation, these paintings make a bond with the beholder, transmitting visually what music can do through the ear. As for its value?

This brings up the classic study of abstract and representational art by the German art historian Wilheim Worringer (1881 - 1965).  His book Abstraction and Empathy, first published in Germany in 1908 and issued in English in the United States of America in 1953, had an enormous impact on art and criticism.  Worringer saw the beauty both in art that produced realistic depictions of the world and art that suppressed illusionism - did not depict the "real" but created abstractions.  Empathy, the life-like portrayals of the observable, and abstraction, the repression of real-life representation or the expression of the essences of things - are, according to Worringer, two forms of the human artistic experience. He suggested that empathy comes to the fore when there is harmony between mankind and the world - man has confidence in his surroundings.   Abstraction comes about during social upheavals, unrest when man is in conflict with outside world and is unsure.  At such times, reducing the observable to their fundamentals is man's aim and the result is abstraction.  Throughout the course of art, the pendulum swings between these two tendencies. Worringer's words are worth considering.

Visit the Willem De Kooning Zao Wou-Ki at Lévy Gorvy Gallery and delve into abstraction at its finest.

**See the versions at the Yale University Art Gallery, New Haven, Connecticut and the Gemaldegalerie, Dresden.

Posted by ArtWithHillary at 4:26 PM