Pairings Highlight the Sculptural in a Painter's Art 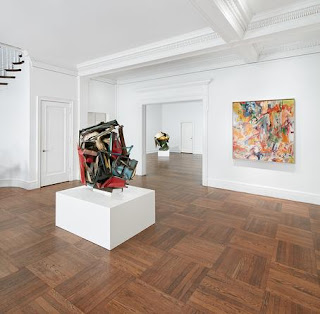 You can count on the Mnuchin Gallery to mount thought-provoking exhibits.  Such is the case of the current show, Chamberlain / De Kooning where eleven John Chamberlain (1927 - 2011) crushed and bent metal configurations are paired with seven Willem de Kooning (1904 - 1997) fluid canvases.  The gallery's well-proportioned townhouse rooms afford an intimate setting to compare the painter's and sculptor's work. 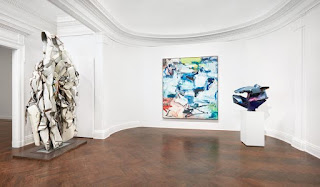 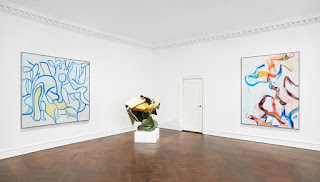 De Kooning, of course, is the towering figure of Abstract Expressionism.  He is the consummate master painter whose Museum of Modern Art's de Kooning:  A Retrospective, September 18, 2011 - January 9, 2012, New York, offered seven decades of inventiveness and thrilling creativity. 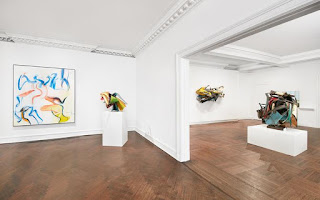 The pairing of Chamberlain and de Kooning has been done in the past. In 2001, the Pace Gallery exhibited Willem de Kooning and John Chamberlain: Influence and Transformation.*  The show accentuated the two artists' strong connections.  Oils on canvas and steel arrangements corresponded in colors and pictorial gestures.  Likeness was the key word here expressed in an astutely handled installation of well-chosen works. 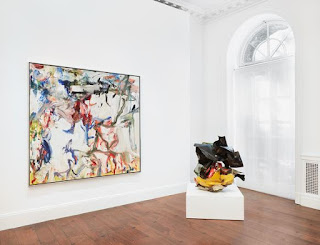 The Mnuchin exhibit makes evident a different viewpoint.  Links between the artworks such as coloration and forms of layering abound but an important distinction stands out.  De Kooning's work appears more spacious, more three-dimensional than Chamberlain's actual sculptures in three dimensions.  The latter's pieces seem to constrict spatial expansion.  Metal planes are compressed creating narrow spatial relationships not unlike the compositional characteristic of sixteenth-century Mannerist art.  The sculptures displace volume but do not appear to extend any further than their outlines.  De Kooning's oils on the other hand explore and open up space. His canvases expand inward and have great depth.   Their space is almost palpable.  Spend time in front of the paintings.  Follow a line here and there.  Try to see a back plane.  The paintings seem never ending. 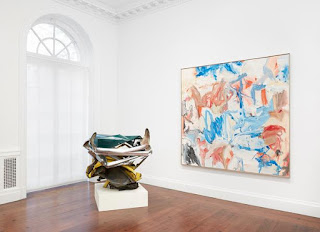 The exhibit brings out de Kooning's formidable strengths which can overpower the sculptures.  As for Chamberlain, the show raised some questions and desires.  Wall protrusions, the sparkle/glitter of paint, mirror polished aluminum bring to mind another artist.  This reviewer would like to see an exhibition of Chamberlain sculptures and Frank Stella's Indian and Exotic Bird series of 1978 - 79 and, perhaps, Stella's Circuits series of the early 1980s based on the artist's love of car racing. Is there or is there not a relationship?  A comprehensive Chamberlain retrospective which would include the artist's sculptures as well as his paintings, drawings, prints and photographs is long over due.

Another de Kooning pairing is coming to New York soon.  His work will be seen alongside paintings by the Chinese-French painter Zao Wou-Ki (1920 - 2013) at the Lévy Gorvy (ĹG) Gallery, formerly the Dominique Lévy Gallery.**  The exhibit, Willem De Kooning Zao Wou-Ki, opens January 19, 2017 and runs through March 11, 2017. Until then, take a look at Zao's paintings currently at the Asia Society Museum in the exhibition No Limits Zao Wou-Ki.


*At this time, the Pace Gallery was known as PaceWildenstein Gallery.  From 1993 - 2010, Pace operated with the old master gallery Wildenstein & Co.

**Brett Gorvy, former auction house Christie's Chairman and International Head of Post-War and Contemporary Art, will join the Dominique Lévy Gallery in an equal partnership with the dealer Dominique Lévy.  The gallery will be known as the Lévy Gorvy (ĹG) Gallery.  Dominique Lévy had previously been partnered with Robert Mnuchin (M&L Gallery now the Mnuchin Gallery) but left in 2013 to start her own gallery.

Posted by ArtWithHillary at 2:13 PM