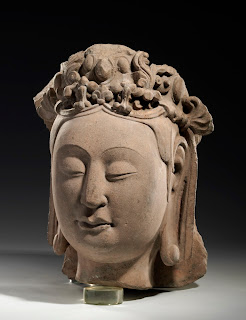 Sometimes good things come out of chaos.  Such is the case for the Chinese period known as the Six Dynasties.  From the 3rd through the 6th century, China was disunited.  Dynasties vied for control in the North and other regimes fought it out in the South.  The dividing line was the Yangtze river.  The Han - ethnically Chinese - controlled the South while the North saw a succession of mainly non-Han rulers, invaders from Central Asia.  War and instability reigned.  Many foreigners entered China bringing new influences.  Yet, out of the mayhem came some astounding achievements.  This is made clear in the China Institute Gallery's latest exhibition, Art in a Time of Chaos: Masterworks From Six Dynasties China, 3rd - 6th Centuries.

This is the first exhibit in the United States devoted to the art of China's Six Dynasties and the first exhibit in the China Institute's new location on Washington Street. The Institute, celebrating its ninetieth anniversary, moved this year from an upper Eastside townhouse to a high-rise in the Financial District. Its new home provides much needed modernized space for the Institute's many worthwhile activities.  This includes the China Institute Gallery which has consistently shown exhibitions of historical and artistic importance during its fifty years of existence.   Like its old Gallery space, the new venue has maintained its sense of intimacy.

The current show consists of over 100 objects.  Four major Chinese art forms are represented: ceramics, sculpture, calligraphy and painting. Many pieces have been unearthed in the last twenty years and have never been on public view in the United States.  Some have not even been displayed in China. 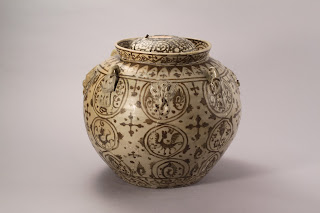 The first two rooms are devoted to the famed, typically grayish-green, celadon porcelain which was developed during this period.  Glass vitrines are filled with items unearthed from tombs.  They are called mingqi, spirit objects, made for deceased use in the afterlife. Everyday wares such as jugs and bowls as well as figurines of attendants and music makers were produced. Spittoons, incense burners, chamber pots, models of a chicken coop and a dog kennel complete with a dog, all from tombs, communicate life in the Six Dynasties. 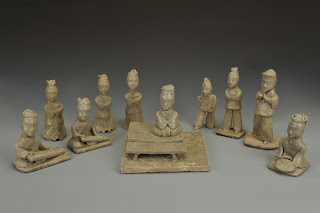 Highlights include a Wu kingdom underglaze jar covered with decorations among which are bird-shaped handles, auspicious beasts, a lotus petal design and cross and scroll motifs; a set of ten figures each differentiated, one easily identified as a non-Han with his pointed cap, high-bridged nose and deep set eyes; and, three celadon urns, called "soul urns," with birds, figures and buildings, thought  to hold the soul of the deceased. 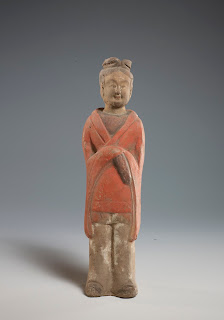 Female Attendant. From a tomb dated to the Northern Qi dynasty,
first year of Wuping (570),
earthenware with pigments; H. 11 1/8 in. (28.2575 cm),
unearthed in 1979 from the tomb of Lou Rui at Wangguo village in Taiyuan, Shanxi
Collection of the Shanxi Museum

The array of sculptures  comprise some delightful representations.  The many recognizable animals include a pig, lion, hen, camel, sheep and horse.  Two models of an ox pulling its oxcart one from the South and one from the North allow comparison of styles.

The many figures of female and male attendants, some mounted on horseback, are individualized.  Clothing and hairstyles would indicate a figure's role in society.  The double coils of hair making up the top knot of one Northern Qi female attendant may indicate that she was close to the deceased. 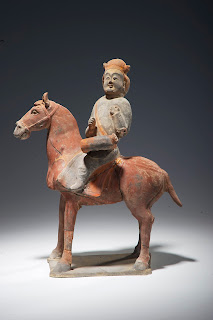 Not to be overlooked are the Buddhist works which evince the strong impact of Buddhism. One of the most beautiful objects is an exquisitely carved sixth-century sandstone head of a Bodhisattva, a person who is able to reach the highest state of enlightenment but holds back in order to help others.

Calligraphy came into its own as a separate art form at this time. In China, it is the highest valued art.  Different scripts evolved for specific occasions.  Master calligraphers developed their own eloquent, distinguishable style.  Many examples survive because calligraphy was not restricted to paper.  Writings were incised on stone or incorporated on buildings' bricks or engraved on wooden slips used like business cards. The exhibit's offerings make an excellent introduction to this, for most, unfamiliar but fascinating artistry.  Please don't miss the six-inch grey earthenware dog in this gallery.  Its name, translated as Black Dragon, is incised on its back.

Very few, if any, original Six Dynasties paintings have survived the more than a thousand years between their creation and the present. Tomb murals and coffins with their carved reliefs and paintings provide insight into what paintings were like. Parts of the sixth-century sarcophagus of Yu Hong is a case in point. 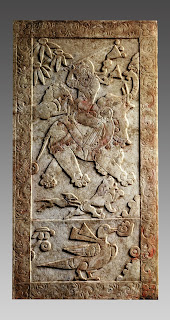 Yu Hong was a high official during three dynasties.  His tomb is enlivened with scenes of wine drinking, musical entertainment, dancing and hunting.  In one, a hunter holding a massive sword and riding an elephant twists around to attack a lion assaulting from the rear.  At the elephant's feet, a hound chases another lion.  The whole composition is energized with movement.  It appears as if the action continues beyond the relief's frame.

I urge you to visit this exhibition.  Take it from me, you won't be disappointed.