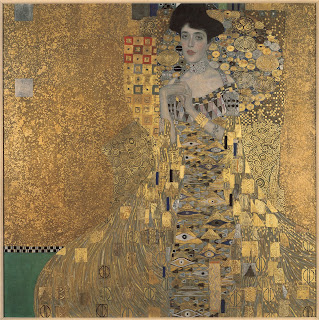 The film is "Woman in Gold."  The exhibition is at the Neue Galerie New York.  The loan is at the Museum of Modern Art.  They are all about Gustav Klimt's Bloch-Bauer paintings.

The painting Adele Bloch-Bauer I caused a sensation in 2006 when purchased for Neue Galerie New York by Ronald L. Lauder.   At this time, the portrait's record price of $135 million was the highest amount ever paid for a painting.  Now the work is again attracting much attention as the focus of the British-American film "Woman in Gold" and the Neue Galerie's exhibition, Gustav Klimt and Adele Bloch-Bauer: The Woman in Gold.

The movie, directed by Simon Curtis, recounts the restitution of Gustav Klimt paintings seized by the Nazis from the Viennese Bloch-Bauer family.  It is the story of Maria Altmann's successful quest for her family's artworks, especially the famous golden portrait of her aunt Adele, Adele Bloch-Bauer I, called the Mona Lisa of Austria.  The narrative follows Maria from her California home where she is now living to the Vienna of her youth. 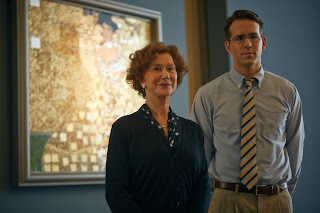 Helen Mirren stars as the aged Maria who takes on the Austrian government with the help of the youthful lawyer E. Randol (Randy) Schoenberg, played by Ryan Reynolds.  Ultimately, the Bloch-Bauer heirs received five Klimt paintings:  Adele Bloch-Bauer I (1907), a second portrait of Adele, Adele Bloch-Bauer II (1912), and three landscapes, Birch Forest (1903), Apple Tree I (1912) and Houses at Unterach on the Attersee (1916). 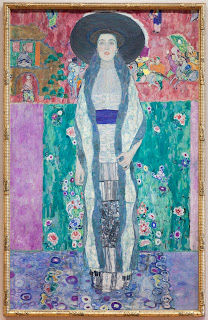 Subtle visual clues introduce the Bloch-Bauer Klimt works to viewers. When Maria and Randy make their first trip to Vienna, they take a taxi from the airport to their hotel.  On route, Maria is seen deep in thought while Randy looks out the window.  He sees the Belvedere Museum which houses the Adele portrait as well as other Klimt paintings.  Their silence is broken as the taxi drives past a large kiosk covered with a larger-than-life-size poster of the second Adele portrait, Adele Bloch-Bauer II, advertising a museum exhibit of Klimt master works. At this point, Randy begins to speak about the official ministry meeting that will take place the next day.  Maria tells him, "I want to go to the Belvedere to visit my aunt."  There follows flash back scenes which bring viewers to the pre-Nazi era.   The camera scans to the Adele Bloch-Bauer I painting over the mantlepiece in the study of the Bloch-Bauer's Vienna apartment.  On the opposite wall, is the oil, Apple Tree I.  The deep, verdant greens of the latter juxtaposes the lustrous yellows of the aunt's portrait.  Each painting enhancing the other. 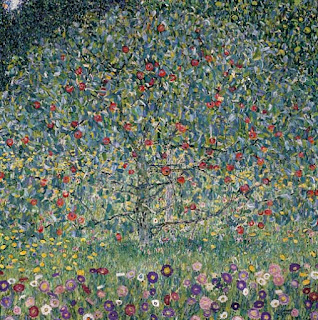 Apple Tree I reappears in the short scene at the Belvedere.  There is a quick shot of it in the gallery leading to Adele Bloch-Bauer I.  Maria and Randy enter the gallery led by an Austrian reporter who is helping them in their undertaking.  They have come to the museum to see the Adele painting for the first time.  Behind the threesome, a female docent conducts a group tour.  She guides her visitors to Apple Tree I. When Maria, Randy and the reporter are looking at the Adele portrait, the docent is heard in the background.  She is about to point out the Adele painting by Klimt which, she says " ...is one of our most famous paintings.  A wonderful example of Austria's heritage."  The movie's final credits appear against a black and white photograph of the Neue Galerie's 1914 landmarked building.  Thus, cinematographically, the film presents three of the Bloch-Bauer Klimt paintings as well as the final destination of the Adele I painting, the Neue Galerie, where it now is on permanent public view.

The movie premiered in New York on April 1, a day before the opening of the museum exhibition.  Undoubtedly, this peaked interest in the Adele I painting and may account for the long lines outside the Neue Galerie's entrance.  This viewer encountered several visitors who normally did not go to museums but were tempted to come because of the film.

The exhibit merits notice regardless of enticements.  It engages on several levels by presenting seven additional Klimt paintings from the museum and private collections; twenty vintage and reproduced photographs of the Bloch-Bauer family, Klimt and contemporaries; fifteen preparatory drawings for both Adele painted portraits; examples of decorative arts and jewelry of the period; and, readable wall text that clearly describes the circumstances of the Bloch-Bauer family and their artworks.

To begin, there is the gorgeous Adele Bloch-Bauer I.  She is flanked by two George Minnes works in a recreation of an installation that took place with the Adele I painting and the Minnes works at the 1907 Mannheim International Art Show.  In the same gallery are the other Klimt paintings:  three landscapes, three small half-length portraits of women and larger-than-life The Dancer that is hung closest to the golden Adele I.

The Dancer was never finished at the time of Klimt's sudden death from a stroke at age 55 in February, 1918.  Yet, the work was the first Klimt painting exhibited in the United States in 1922.
The overall patterned design with oriental motifs recalls the style of the Adele Bloch-Bauer II and highly contrasts Klimt's earlier golden byzantine mosaic phase as exemplified by Adele I.  Viewers are well-advised to go to the Museum of Modern Art, gallery 4 on the fifth floor, where the Adele Bloch-Bauer II painting is on special long term loan. Adele Bloch-Bauer was the only person Klimt painted twice.  When the second portrait was sold at auction in 2006, it was the fourth highest price work of art sold at auction up to that time. The private buyer spent $88 million. 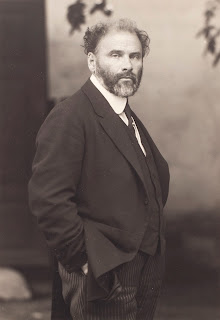 Two items need to be addressed here.  First, there has been suggestions that Adele and Klimt had an affair.  There is nothing, however, to substantiate this idea. 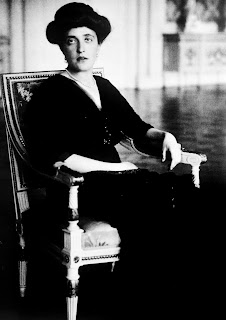 Second, one of Adele's fingers was disfigured.  I suspect it was on her right hand since drawings, paintings and photograph tend to obscure all or some of her right digits.  See for yourself. 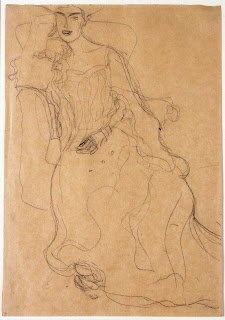 A nice coda to the show is on the museum's lower level.  Here are drawings by Viennese students who were assigned to go look at the Adele Bloch-Bauer I before she left for America and imagine Adele in her new home.  The drawings were given to the Neue Galerie as a gift and a selection is presently on view.  They are a delight. 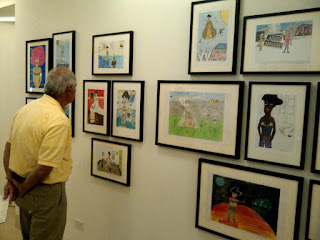 In addition, the museum has installed a framed full-scale reproduction of its Adele portrait.  Since photographing is not allowed in the upper galleries, visitors may come here to pose before copy and get their "selfie."  A copy could be yours for $550.  Enjoy the show.

Posted by ArtWithHillary at 1:53 PM