I. The Leonard A. Lauder Cubist Collection: 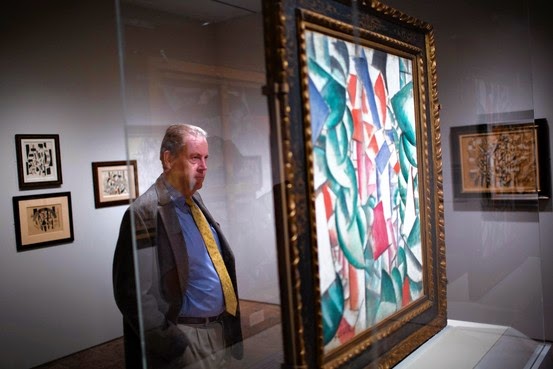 A man looks at the back of Fernand Leger’s ‘House under the Trees,’
which features a portrait of a woman, scrapped by the artist.*
Photo:  Kevin Hagen for The Wall Street Journal.

One of the finest private collection of cubist artworks is going to the Metropolitan Museum of Art.  A gift of the art patron and philanthropist Leonard A. Lauder, it will no doubt be a game changer for the Museum as well as those who view it.

In general, artwork needs to be seen in person.  This is especially true for Cubism.  Photo imagery simply can not make visible the multiplicity of brushstrokes, diversity of canvas textures, compositional intricacies and color luminosity that characterize Cubist painting.

On several occasions,  this viewer noted visitors spending exceedingly long times looking at the actual works as opposed to lingering over wall text and labels.  Such a public engagement with art is seldom observed. 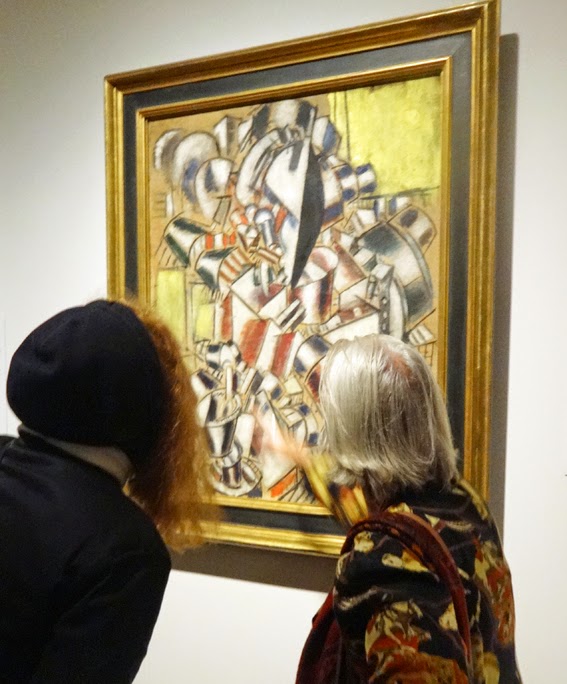 The exhibit is organized by individual artists intermixed with a couple of thematic rooms.  Besides visual delights, viewing imparts a comprehensive understanding of the movement known as Cubism in its Analytic and Synthetic phrases.  It also makes clear the distinct forms of Cubism developed by participating artists.

Between 1907 and 1908, Braque and Picasso begat Cubism. Landscapes, figures and objects were broken down or fractured into small geometric forms.  These facets were reassembled and laid out on two-dimensional planes.  Modeling, illusions of three-dimensionality, one point perspective in use since the Renaissance were abandoned.  Analytic Cubism "analyzed" things from many points of view.  Palettes were monochromic and muted.  Realistic representation was all but lost - depictions verged on abstraction.

Braque may have initially been the leader in this new style but Picasso took over as Cubism evolved into its next phrase, Synthetic Cubism.  In 1912, the artists began to add paper and other materials, both real and painted, to their compositions. Bold colors were introduced.  Bits of everyday life like packagings, advertisements, and newspapers mingled with painted imagery. 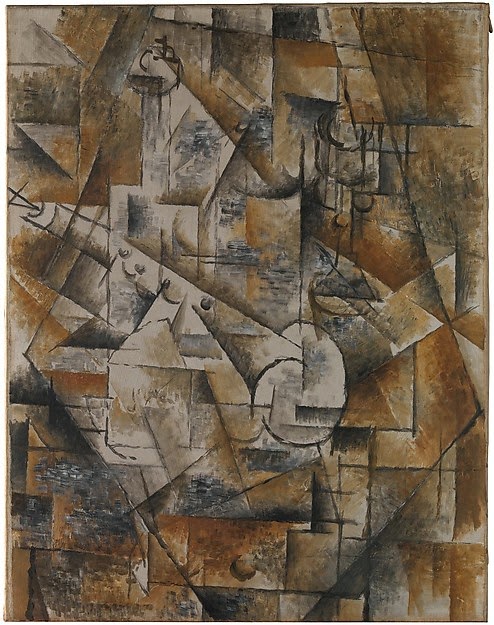 Between 1909 and 1911, Braque and Picasso worked closely together - each aware of what the other was doing.  At this time, their art looked quite similar.  Their differences, hard to distinguish at first, is the subject of one exhibition room where paintings created by the two are hung side by side. 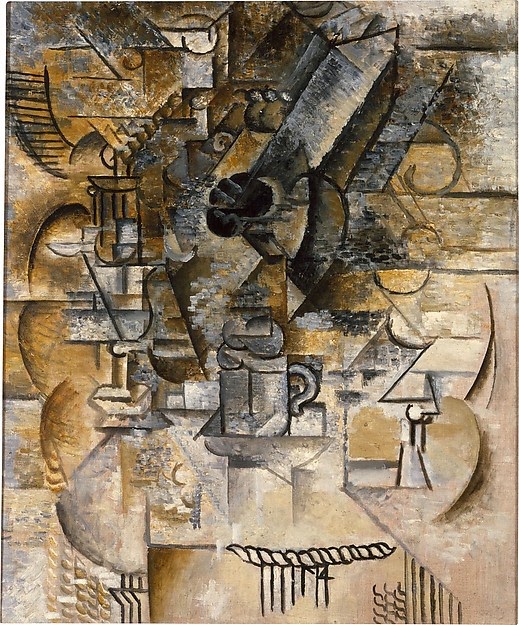 Wall text points out Braque's use of long, unbroken diagonal lines which transfixed forms spread across the picture's surface.  There is no central point of focus - elements are balanced, evenly dispersed. Rendered with thinly applied paint, the whole imparts a sense of dematerialization.  Picasso's compositions are centered.  Tactile qualities are pronounced.  Pigments are applied with opacity.  Contours are emphasized with shading. Facets appear almost three-dimensional. Compare Braque's Violin: "Mozart Kubelick" with Picasso's The Scallop Shell: "Notre Avenir est dans l'Air" which are displayed in a room concentrated on Cubist color. 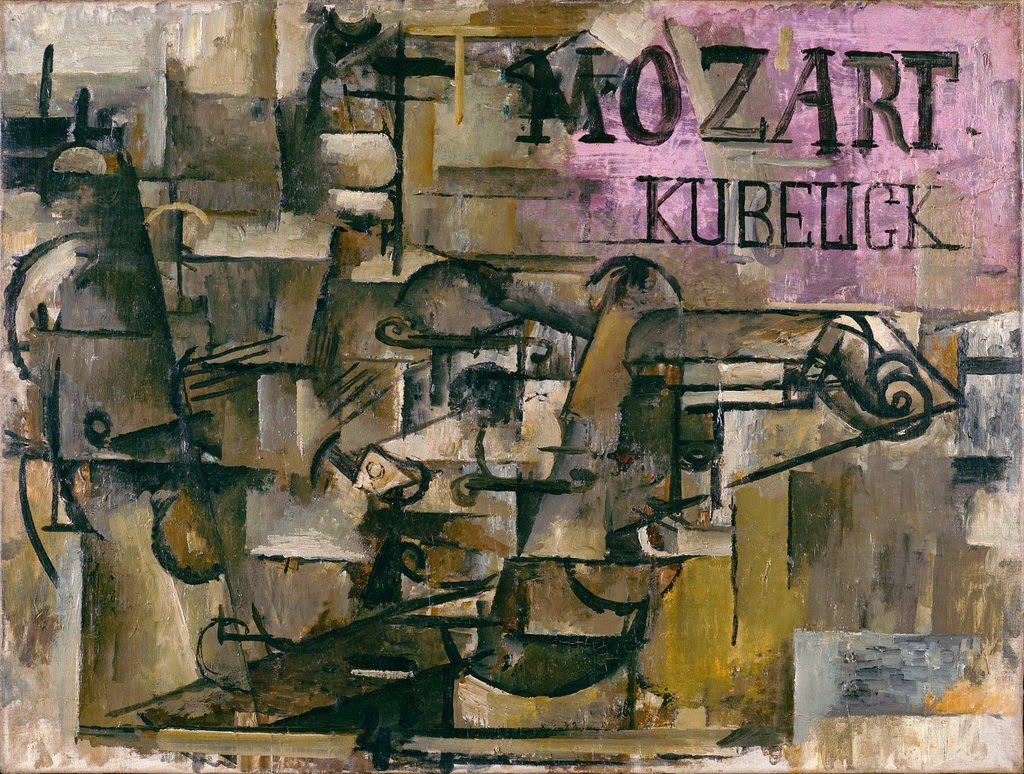 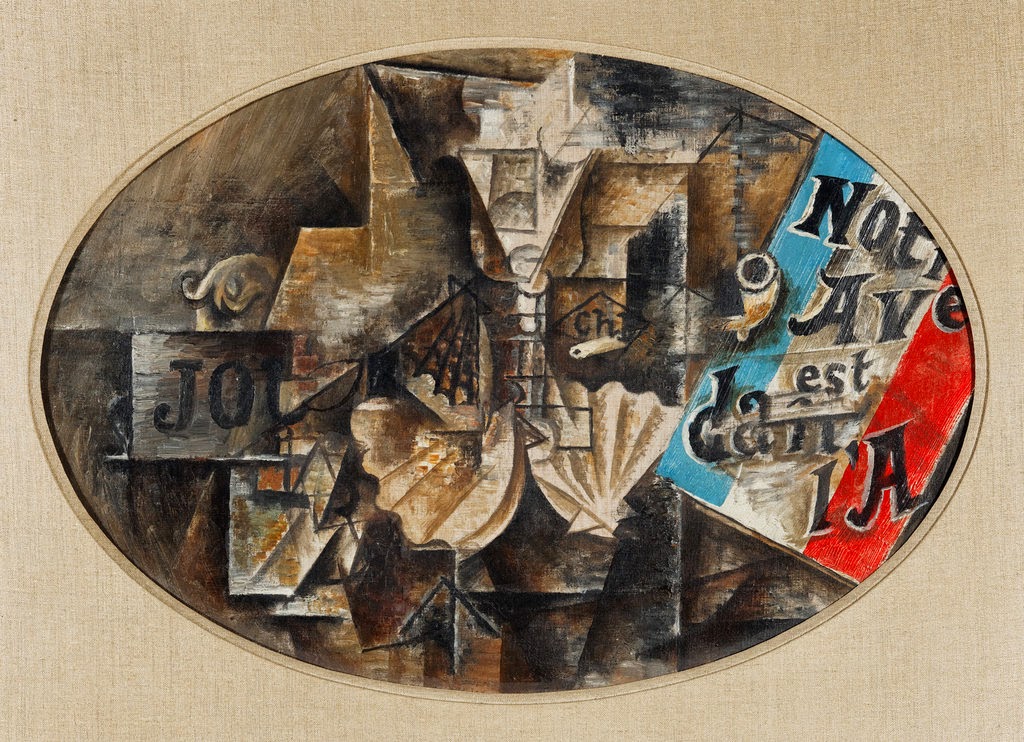 Both paintings are complex.  Allusions that would have been understood by the artists's own contemporaries are lost today.  The words in Braque's painting, "Mozart" and "Kubelick" refer to a concert that took place in the spring of 1912 in conjunction with a retrospective of works by the artist Jean-Auguste-Dominique Ingres (1780-1867). Included in the exhibit  were Ingres's palette and violin.  At the concert, which took place in the art gallery a few days after the exhibit opened, the famed Czech violinist Jan Kubelik** performed Ingres's favorite music on the artist's own violin.  Ingres, who had a special regard for Mozart's oeuvre, had studied music and played the violin regularly. Braque and Picasso greatly admired Ingres and would have had a keen interest in the exhibition.

Braque deconstructs a violin, the painting's subject, which appears to rest on a table or shelf.  The two words, surrounded by pink, seem as if they are on other realm.  Perhaps they refer to some poster or handbill. Certainly they call attention to the concert event.  The violinist name, Kubelik, includes "kube."  Cubist painters, delighting in word play, often incorporated words with "cube" into their paintings.  As for Braque's misspelling of  "Kubelik,"  it remains a mystery.

In The Scallop Shell: "Notre Avenir est dans l'Air," Picasso makes reference to the pamphlet, "Our Future is in the Air," which was circulated to promote France's aviation program. Braque and Picasso working closely together towards a new vision likened themselves to the Wright brothers.  The blue, white and red stripes refer to the French national flag - perhaps Picasso's declaration of patriotism to his new home.  The colored bands are painted with ordinary household paint instead of oil paint traditionally associated with fine art.  The use of both oil and house paint - high and low mediums - is another way Cubism brought together the conventional and unconventional.

The painting's central two shells may hint at a recent trip to Le Havre Picasso took together with Braque or a reminder for the artist of his beloved port city of Barcelona.  Shells had long been symbolic of travelers and pilgrims.  They were sold as tourist souvenirs from port and seaside towns and, as such, would have significance for the artist.

The letters, "JOU" comes from Le Journal, a daily Paris newspaper - letter stencils making partial words were commonly placed in Cubist works. The Scallop Shell: "Notre Avenir est dans l'Air" has more to impart but let the above suffice for now.  Readers may pursue their decoding on their own. The show's excellent catalogue provides much information and is well-worth looking into.

Picasso's sculpture depicts a commonplace item - a glass for the notorious intoxicating drink absinthe complete with sugar cube and spoon.  The glass is seen from multiple vantage points and includes shadows modeled in three-dimensions. Most shocking, the artist includes a real object - a piece of cutlery.  A sculptured sugar cube rests on a genuine perforated trowel-shaped absinthe spoon placed on the rim of a sculpted glass.

To drink the anise-flavored liquor, cold water is slowly dripped on the sugar cube which causes the sugar to dissolve into the liquid below. Although the beverage is green, the artist avoids this color.  His colors do not describe the subject.  He uses blues, blacks, reds, whites and touches of yellow.

Painted dots on the sugar, at the base of the glass and on planes in various views denote the confetti that was used in abundance at Mid-Lent and Carnival parades.  Throwing paper confetti at festivities became a craze in the late nineteenth century and its popularity continued into the twentieth century.***  Along celebration routes, the practice caused small round colored paper pieces to cascade on the outdoor cafe customers and their drinks.  The soft paper disks replaced plaster chips in France in 1892 when the latter was banned for causing injuries.  Colorful stippling in Cubist works refer not only to the confetti craze of revelers but also to Pointillism and Divisionism, styles of painting exemplified in the works of Georges Seurat (1859-1891), Paul Signac (1863-1935) and Henri-Edmond Cross (1856-1910).  Cubist dottings, unlike the earlier movements, were not used to define or describe objects but to enhance the picture's formal qualities - enlivens surface with texture and light.  At the same time, the dots acknowledge earlier artistic endeavors and the worthiness of popular culture.

Two very different artists, Juan Gris and Fernard Léger, round off the Lauder Collection's pioneers of Cubism.   More about these painters next month. 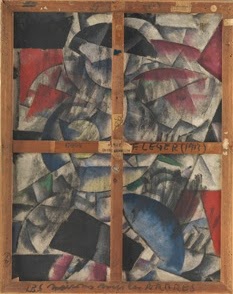 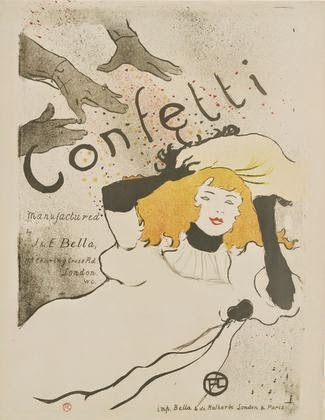 Posted by ArtWithHillary at 12:06 PM