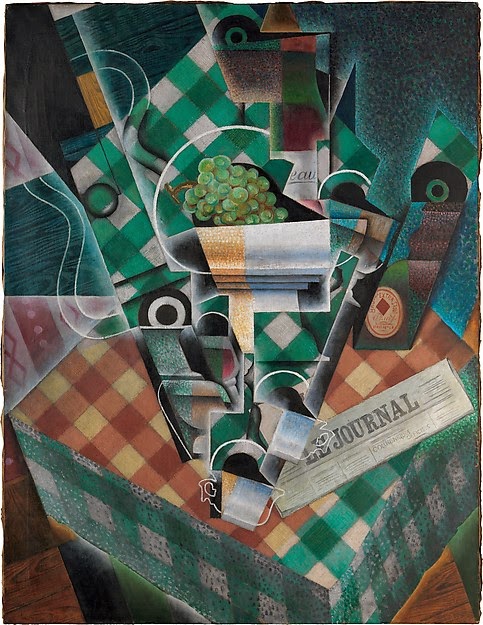 Of the four notables of Cubism - Georges Braque (1882–1963), Juan Gris (1887–1927), Fernand Léger (1881–1955) and Pablo Picasso (1881–1973) - Gris and Léger developed the most individualistic Cubist styles.  Unlike Braque and Picasso whose Cubism could be very similar, Gris's and Léger's work are highly distinct.  Gris never relinquished realism; Léger moved away from representation toward total abstraction.  This is plainly seen in the Leonard A. Lauder Cubist Collection bequeathed to the Metropolitan Museum of Art and now on view in the exhibition, "Cubism:  The Leonard A. Lauder Collection."*


Gris a Spaniard like Picasso, came to Paris in 1906.**  He became friends with Braque, Léger, Picasso and Matisse.   Gris's use of bold color combinations shows his debt to Matisse.

The paintings Still Life with Checkered Tablecloth and Pears and Grapes on a Table, illustrate the artist's salient characteristics: unconventional coloration, dizzying viewpoints, transposable foregrounds and backgrounds, checkerboard patterns, diagonally placed objects, abrupt cropping, dark shapes and outlines and depictions of things that would be familiar to everyone.

A first look at the paintings with their bird's-eye perspective may confuse. Once the spectator realizes he/she is looking down at objects on a table, the scenes becomes clear. 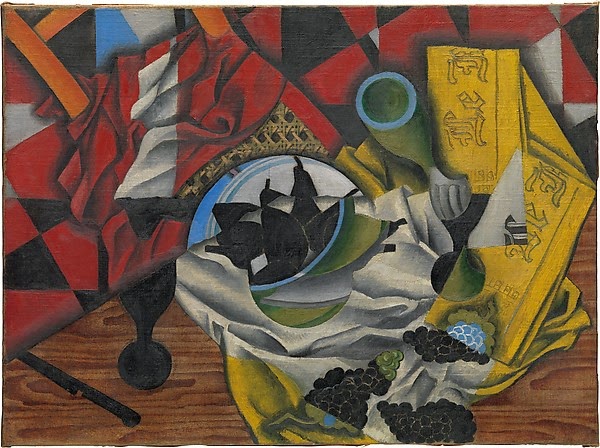 
In Pears and Grapes on a Table, the table laden with items typical of a light snack or meal - a bowl filled with pears, grapes, a goblet, knife, tablecloth and two folded Le Matin newspapers, identified by the masthead lettering and the artist's choice for news.


The room's checkered flooring appears to meet the edge of the wood table top.  The pattern partly obfuscates a chair set diagonally to the picture frame and cut off acutely at the its top edge.  Everything is flat, two-dimensional. Even the blue rimmed goblet with some shading and a base decoration that can be interpreted as fingers of a hand seems like a paper cut out.

A mysterious quality permeates the scenario.  Everything is in disarray as if something unusual has taken place.  The use of blacks for fruits, silhouettes and the knife may point to an event that was sinister. The rumpled red shawl left on the rattan seat of the orange chair and the chair's position may indicate a person has left in haste - too rushed to take the shawl or push the chair fully away from the table.

At this time, a pulp fiction series featuring a master criminal and his exploits was popular among the Parisian avant-garde.  Gris was an enthusiastic fan.  Thrillers, cops and robbers, cliffhangers held the artist's interest.  His paintings, such as Pears and Grapes on a Table, may be viewed as visual equivalents to stories of suspense. 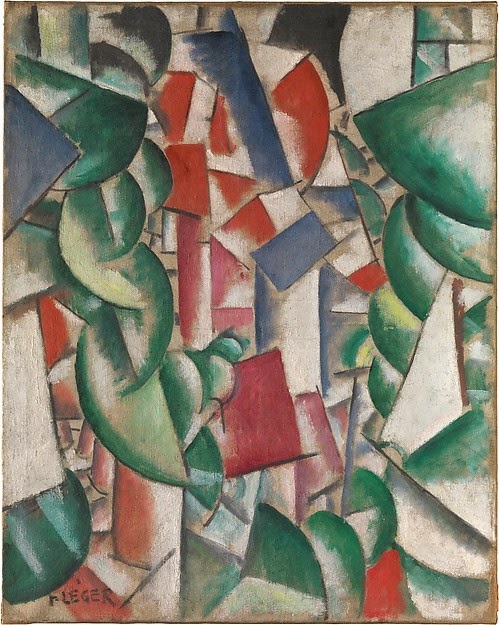 Unlike the other Cubists, Léger severs the connection to reality outside of the painting.  He employed a geometric vocabulary of cubes, rectangles, cylinders and circles.  Curves were his preference.  A palette of primary and complimentary colors add to the firm plasticity of  the forms. Drawing and geometries give the work a strong rhythmic quality.   The paintings have motion.  Lines and shapes shift providing equivocal meanings.  In Houses under the Trees, the curvilinear elements that designate trees can simultaneously be interpreted as billowing smoke rising from a city landscape or the curvaceous outline of a shapely nude.  Here, the red, blue and white colors may refer to the French national flag.  If the painting had no title - no references to houses or trees - would the subject be recognizable? 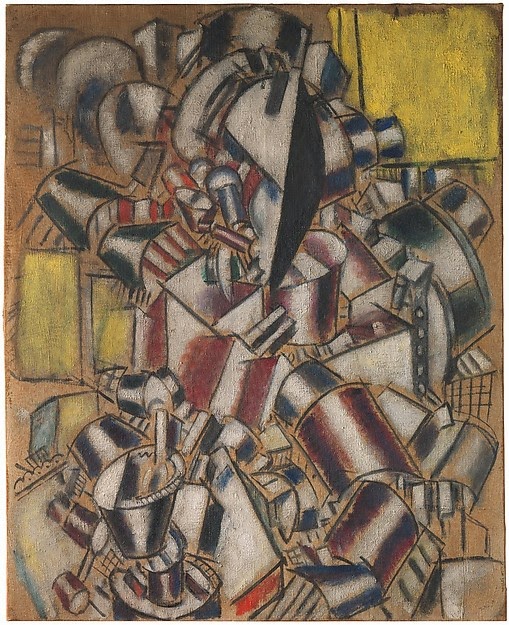 This viewer would be hard pressed to make out the subject in many of Léger's works.   Hints help.  In The Smoker, the painting's subject is seen in a three-quarter view from the rear.  A long oval in the upper center of the canvas indicates the back of the head.  The smoker's red pipe is made up of a tubular stem and bucket-like tobacco chamber. White and blue bulbous puffs of smoke rise in the painting's upper left corner.  The smoker's body is a configuration of cylindrical and curvy forms. Combinations of lines, colors and figurations give the painting motion and three-dimensionality.

Léger's paintings appear to assemble before the viewer's eyes and give the feeling that if one turns around and looks again, the work will be different - the parts would have moved.

Spend time with Leonard A. Lauder's remarkable gift.  Each artwork is of the highest quality and significant.  This is a gift that keeps on giving for Mr. Lauder has placed no restrictions on his generosity which means the Museum can place the works according to curatorial needs. Furthermore, the collection is not finished.  Mr. Lauder plans to continue enlarging the Cubist holdings when art of suitable value comes to the market.

Go to the Met.  See the exhibit.  Mr. Lauder's passion for Cubism expressed in his collection will surely ignite your own.

*For "I.  The Leonard A. Lauder Cubist Collection:
A Game Changer Part I," go to ArtWithHillary, November, 2014.

**This is the year Paul Cézanne (1839-1906) died.  In 1907, two major Cézanne exhibitions took place in Paris:  a large-scale show of the artist's watercolors at the Galerie Bernheim-Jeune and a memorial retrospective with 56 of his paintings at the Salon d'Automne, the annual Paris exhibition for the advancement of modern art.

Cézanne's powerful influence on the development of Cubism as well as subsequent artistic movements is firmly established. He presented an alternative view of the world - seeing everything in geometries - implying what we perceive through our eyes is not reality. Painting no longer had to be about copying life but could be about giving solid form to underlying structures, seeking the permanent, eternal.  In his work, contradictions seem to make sense. Planes are flattened, foreground and background appear flush while objects and shapes are rendered three-dimensionally maintaining a sculptural quality.  Cézanne initiated more - such as leaving parts of the canvas untouched by paint yet important to the overall totality of that which is depicted.  His paintings freed artists to explore what art could be and they took from him what they wanted.


Picasso called him, "...my one and only master" and said, "Cézanne was like the father of us all."  The latter quote has also been credited to Matisse.    Léger commented, "The power of Cézanne was such that, to find myself, I had to go to the limits of abstraction.”  While Gris asserted, "Cézanne turned a bottle into a cylinder, but I begin with a cylinder and create an individual (object) of a specific type. 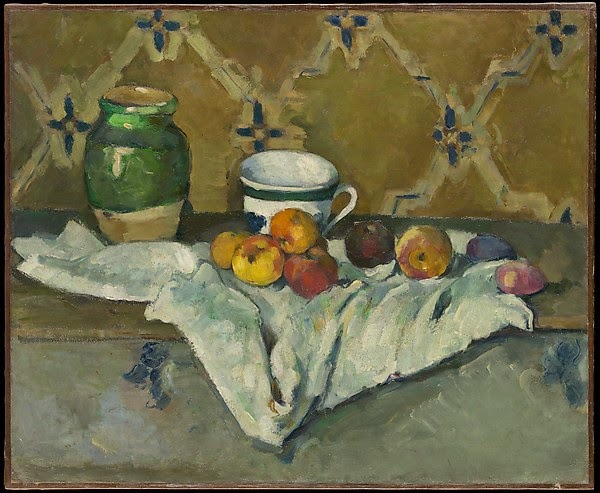 Gris's connection with Cézanne's still lifes are obvious.  The artist used similar motifs: table tops with familiar objects and patterns that one can recognize from painting to painting.  There is also the common knife placed slightly off a table's edge and the mussed white tablecloth.

I urge readers to spend time with Cezanne's work which is well-represented in New York's museums.

Posted by ArtWithHillary at 1:55 PM