Thinking About "The Thinker" And More 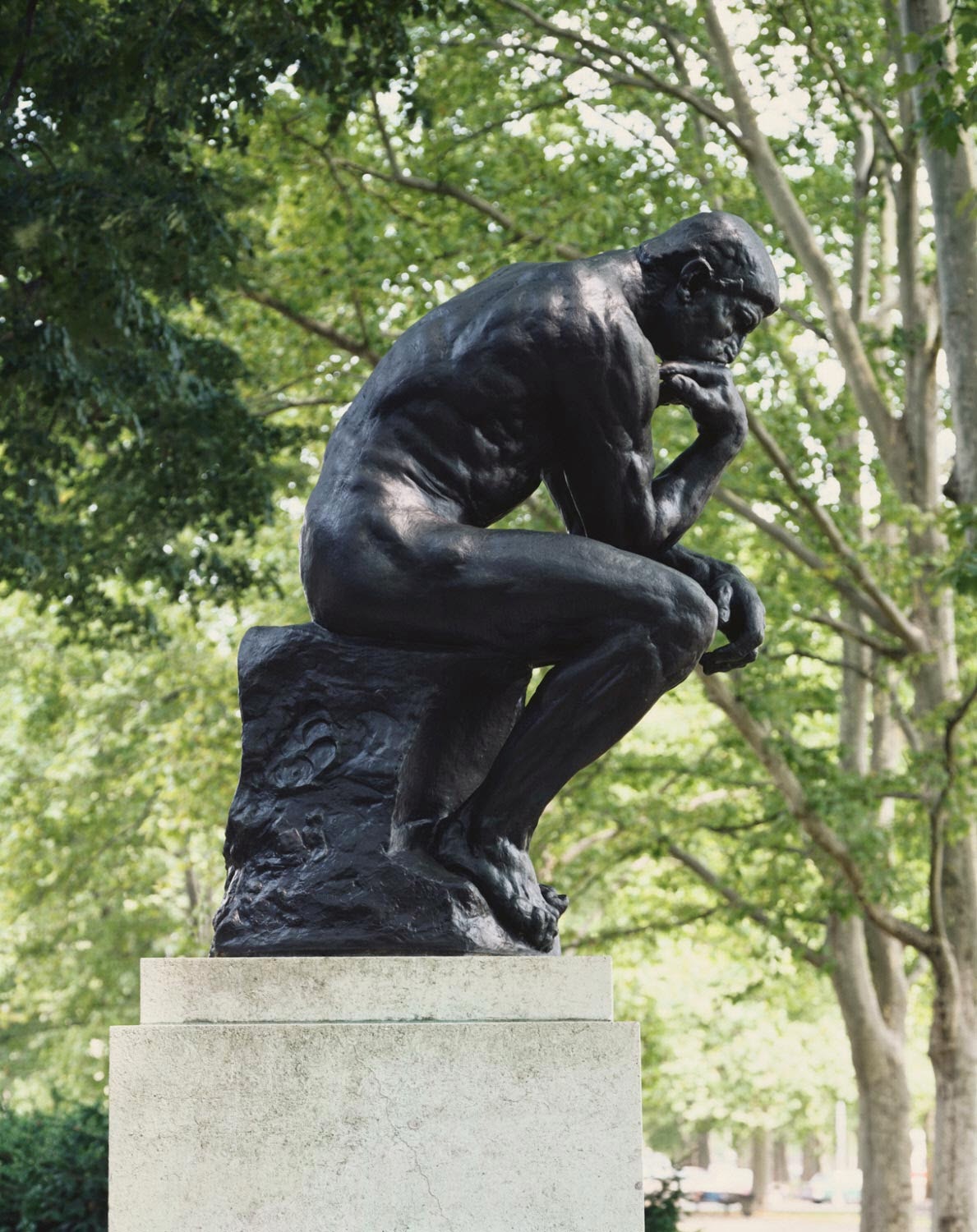 Auguste Rodin's "The Thinker" seems to be everywhere.  Castings appear in various sizes, placed in museums and parks alike. The sculpture is part of the public's conscious, so familiar it's often passed by.  The origin forgotten or never known. 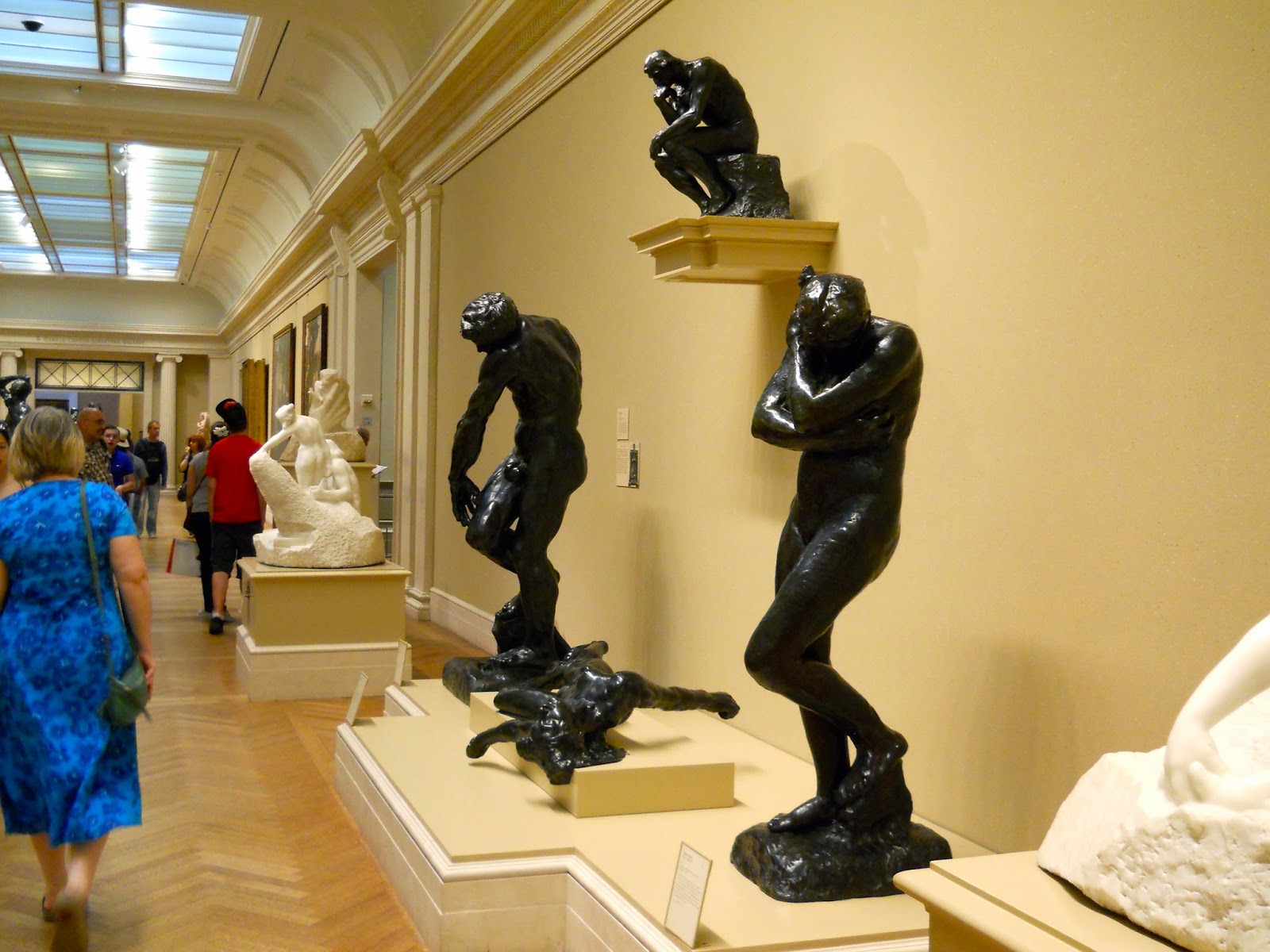 The seated figure still attracts.  Witness the "must see" stop for tour groups.  Some attention to the work and the sculptor's achievement is in order. 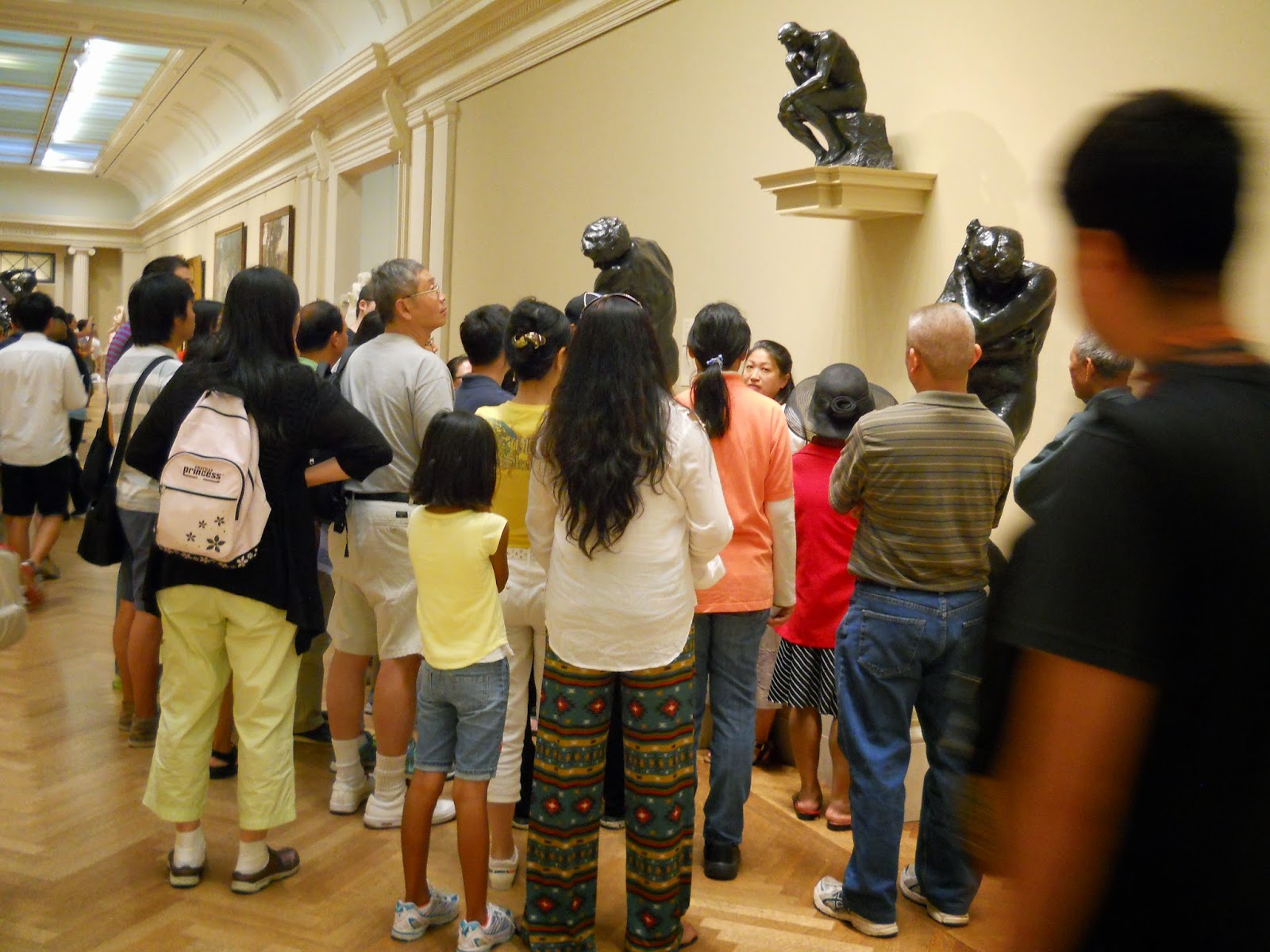 The Thinker as well as many of Rodin's sculptures were created for the monumental doors entitled The Gates of Hell. 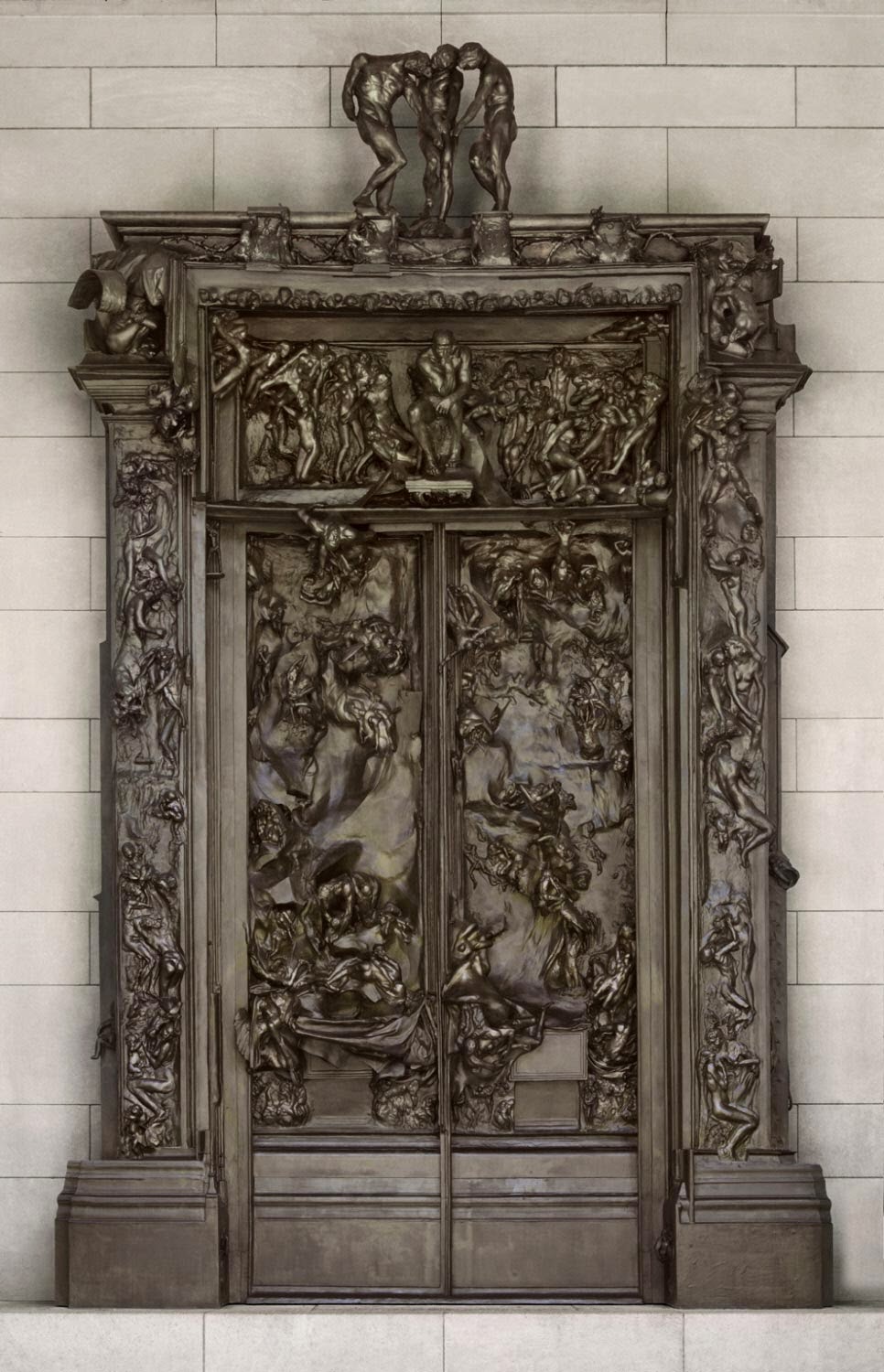 In 1880, the French government commissioned Rodin to devise the portal for a planned museum of decorative arts.  The imagery the sculptor chose was based on Dante's Divine Comedy, in particular the poem's first part, Inferno. It was Rodin's modern answer to the Gates of Paradise, Lorenzo Ghiberti's famous Renaissance doors on the Florence Baptistry.**

Although the idea for the museum was abandoned by 1887, Rodin worked on the project until his death.  He used the door as a background for his evolving sculptural ideas, forming in clay and plaster a wrenching transformation of the human form.

The Gates of Hell were never cast in bronze during the artist's lifetime. When Rodin died in 1917, only a plaster version existed.  This was left in pieces in the artist's studio.  Subsequently, the work was reconstructed by the first curator of the Musée Rodin.  The reassembled full-size plaster Gates of Hell now resides in the Musée d'Orsay which is located on the site intended for the proposed decorative arts museum.  Thus, the doors rest in the place originally envisioned. 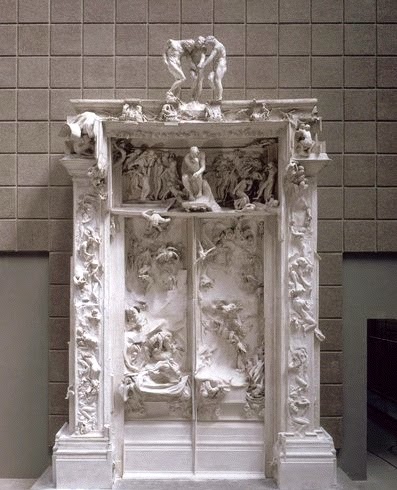 There are over 180 figures on the portal.  The sense of movement and formation are the great triumphs of the doors.  Figures emerge and submerge from the watery background. They evolve and develop. Partial body parts express the whole. Fragments would become stand alone sculptures.  Forms are replicated.  Rodin's art is an art in flux, revolutionary for its time.

The seated Thinker presides over the multifarious figures.  Considered a depiction of the poet Dante, he may be meditating or contemplating the tortured beings about him. The Three Shades, the same figure repeated three times on top of the entablature's midpoint, emphasize The Thinker's centrality.  Their bent bodies and extended arms lead the viewer below. They are the souls of the damned and, according to Dante's Divine Comedy, stand at the entrance to Hell.

The Thinker was turned into an independent artwork in 1888.  Cast in numerous sizes, the sculpture became one of Rodin's most popular pieces.  Other Gates of Hell figures were also transferred into full-size, free-standing sculptures. Some transfigurations make The Gates ancestry difficult to trace.  Take a look at Rodin's The Martyr. 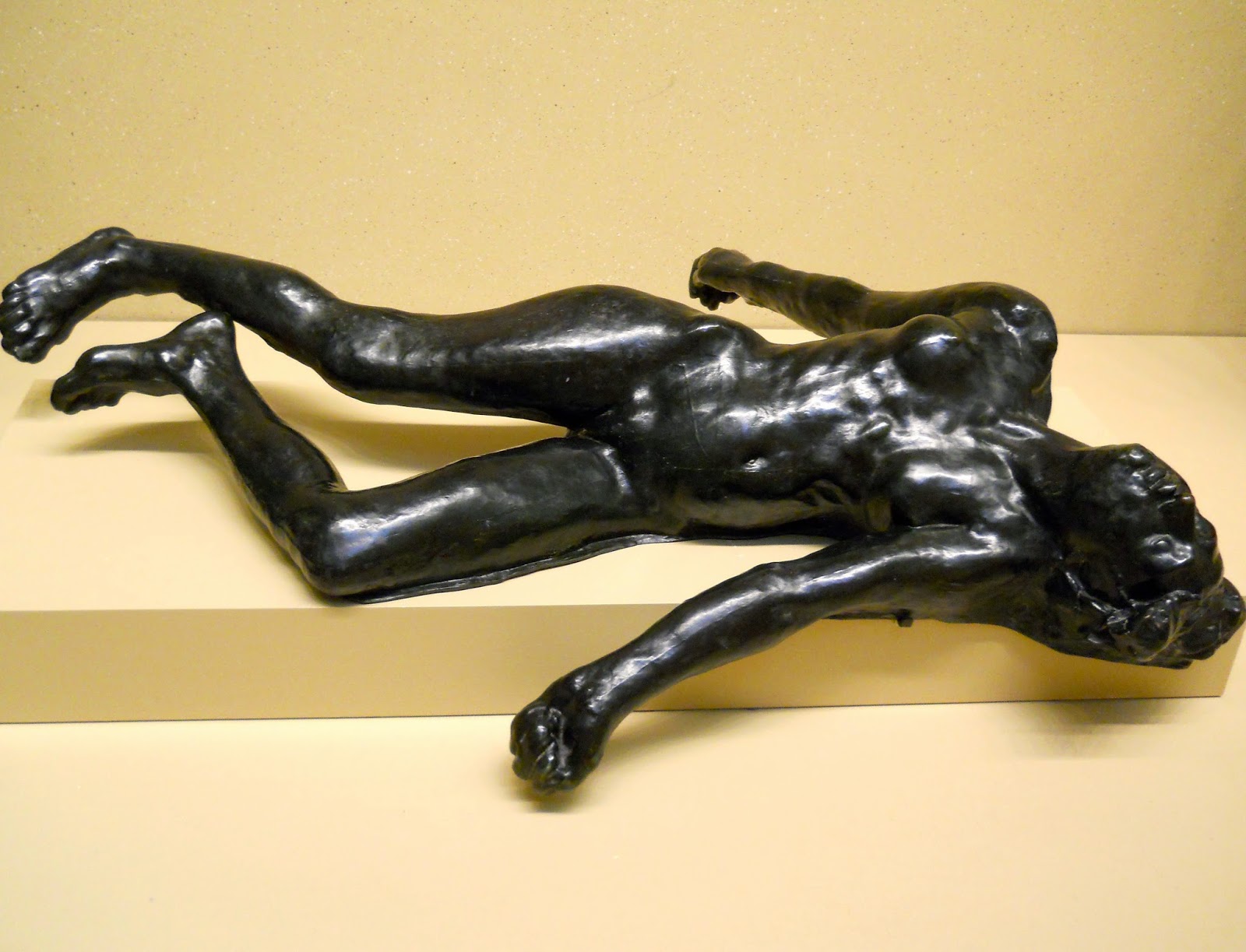 The autonomous work evolved from a standing figure on The Gates of Hell lintel.  She is to the left of The Thinker behind a squatting woman ***. 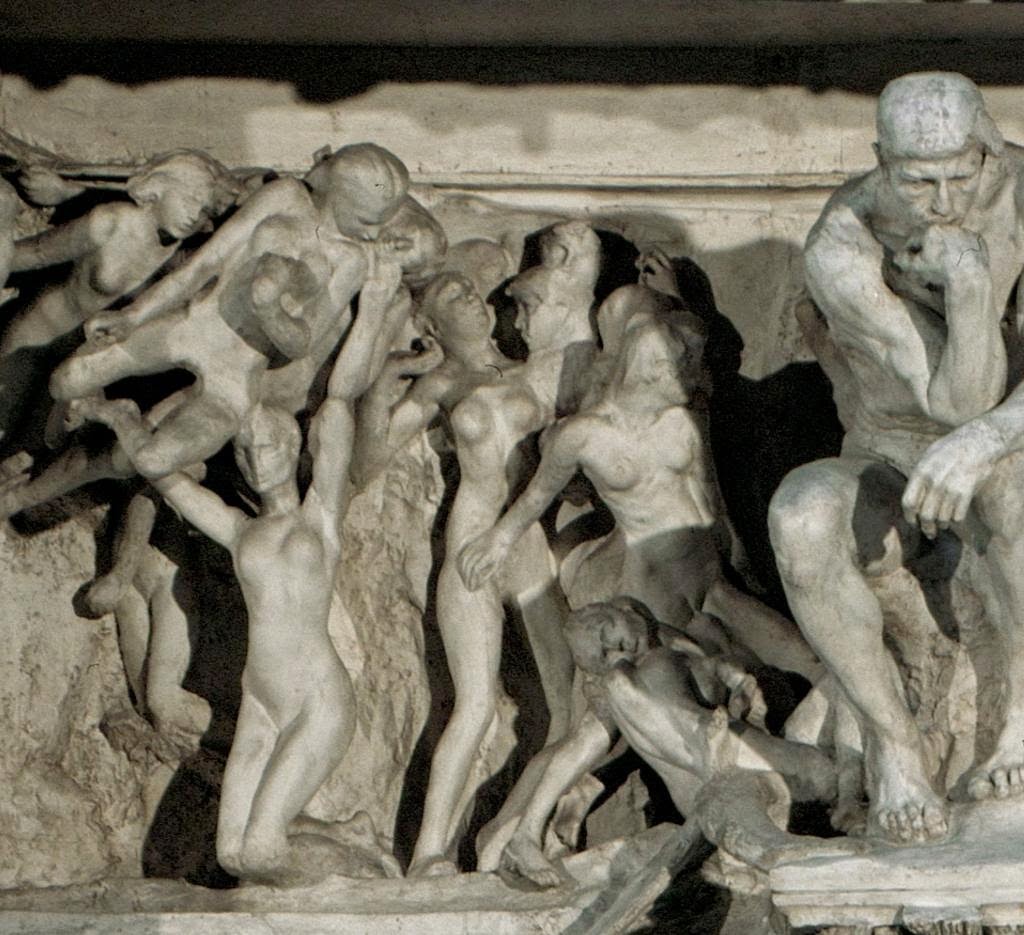 Note the position of her torso with its splayed breasts. Her right leg with its foot turned inward (slightly off the lintel's edge) offers little stability.  In 1885, The Gates small lintel figure was realized as an independent, almost life-size bronze sculpture. 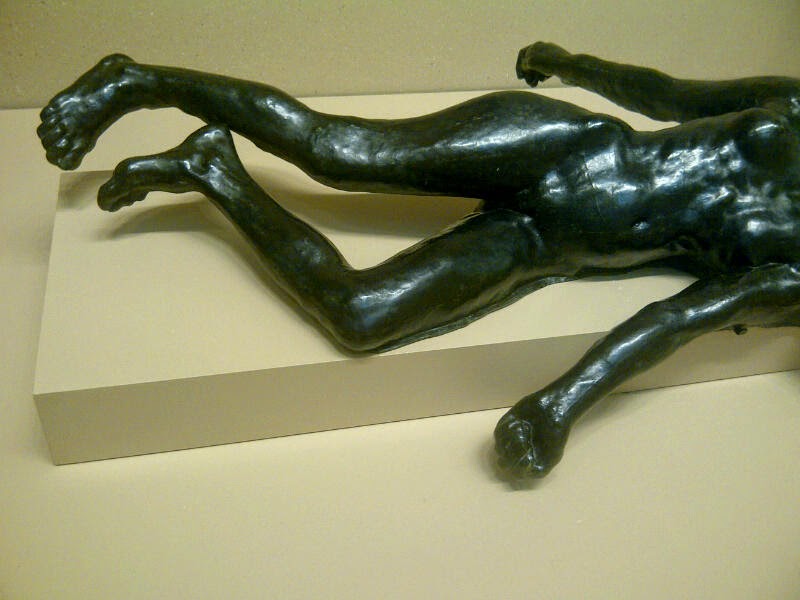 The same figure made another appearance in the form of the goddess Fortune on The Gates lower left door panel. 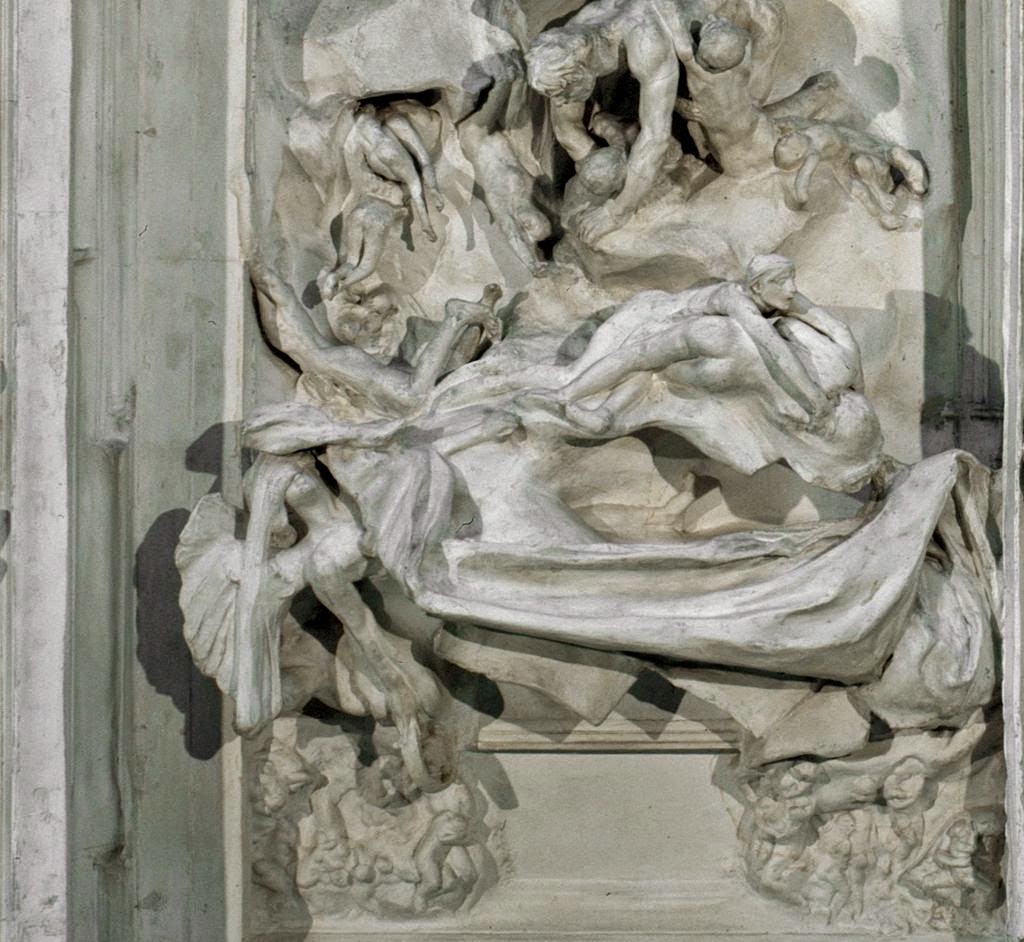 Here, she is winged, a horizontal recumbent on a tomb-like structure. A veil across her eyes prevents her from seeing.  Her right hand holds a spoked wheel.  The veil and wheel are Fortune's attributes. The latter indicative of  the cycles of fate and the former alluding to the unpredictability of fortune - those that do not deserve good luck, sometimes get it.

The Martyr figure reappears in 1895 as the fallen Icarus in Rodin's sculpture The Fall of Icarus.  Here she plunges head first, her nose touching the ground.   In 1911, she is found again upright rendered in relief on a white marble cemetery monument called Le Lys brisé.

Rodin used live models for his work.  The Martyr model must have been low-lying on her back when he formed her in clay.  The positioning of the breasts, flaccid tissue spread wide apart, would not be possible on a standing woman. Thus, when the figure was released from The Gates and made independent, she was restored to her original supine pose.  Rodin meant her to be seen from above.  He gave her a low, flattened platform.  At the time, such a placement would have astounded if not perplexed viewers.  Figurative representations were seen standing or seated not sprawled on the ground.  Rodin's figure spills over her perch, entering the spectator's space.  This is not art on a high, untouchable pedestal.

With her head dropping backward one way, chin raised in opposition, arms spread apart and legs awkwardly posed, she appears as a woman who suffered a violent death or a woman in sexual ecstasy.  As such, she seems the progenitor of  Alberto Giacometti's Woman with Her Throat Cut - a female abstraction of rapture or pain.  The lineage is there. 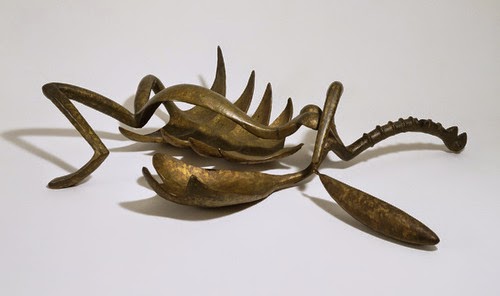 Giacometti studied with the sculptor Antoine Bourdelle who had been Rodin's assistant from 1893 until 1909.

Rodin's distortion and breakdown of the human form, his replications and revolutionary position of sculptures influenced future generations. Although he depleted parts of the whole - a hand, arm or torso - his work remains recognizable.  Human qualities prevail.  His achievements made possible much of modern arts's representational freedom.

You can see Rodin in the background of Carl Andre's creations made of duplicated forms positioned on the floor or Joel Shapiro's movement filled constructions. 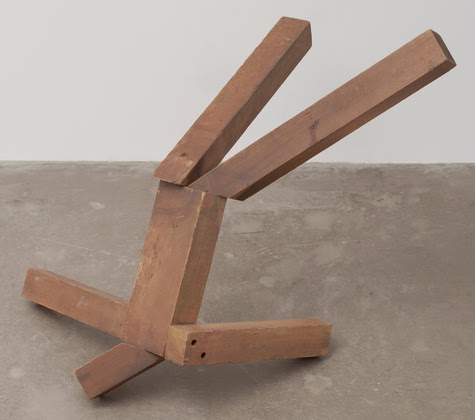 Some 50 sculptures of the master are located in the Metropolitan Museum of Art's Gallery 800.  If you have not been, go.  If you have,  go again.

**The original East Doors of the Baptistery of San Giovanni, Florence, Italy are in the Museo delle Opere del Duomo.  The East doors presently on the Florence Baptistery are replicas.

***This figure became the independent sculpture known as The Crouching Woman.


Posted by ArtWithHillary at 7:56 AM