If you think you have seen enough Picassos... 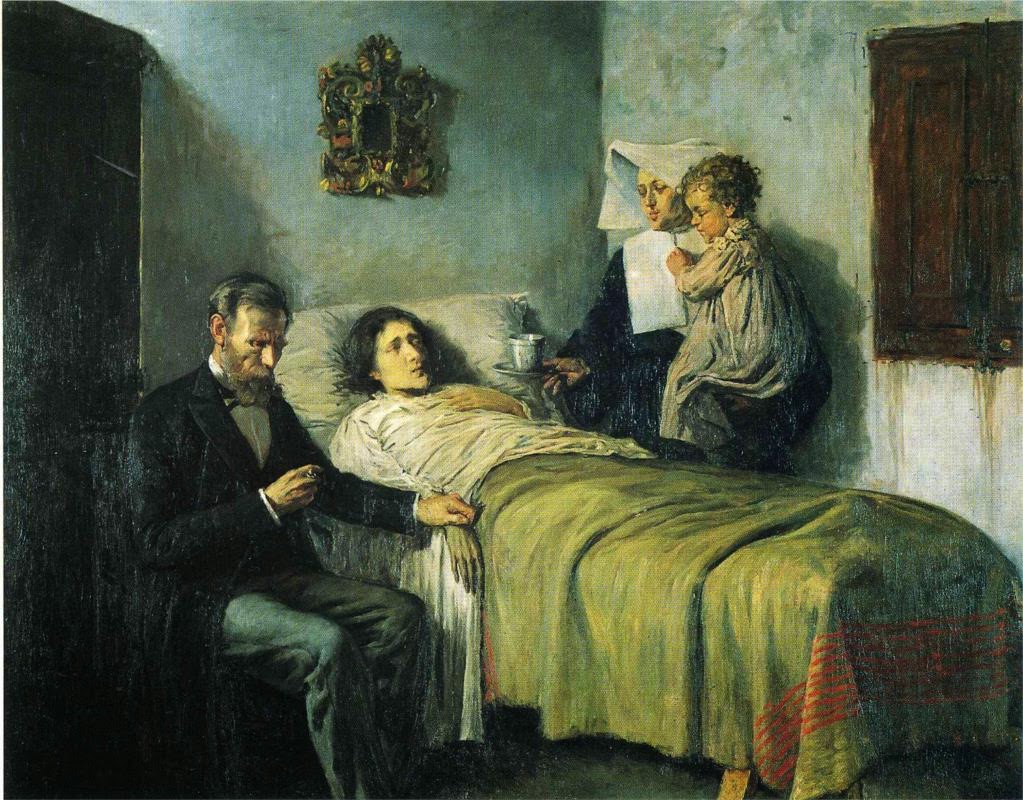 Just when you think you have seen enough Picassos, the painter astounds.  Such was the case for this viewer on a recent trip to Barcelona.

I assessed no need to return to the city's Museu Picasso since I had been there two or three times in the past.  However, the museum's lovely buildings enticed.  Five smartly connected grand townhouses built between the 13th and 15th centuries offer a spacious, relaxed venue to look at art.  I thought, just a few hours.  Two afternoons later, amazed by the artist's fecundity and youthful brilliance, I want to go back. 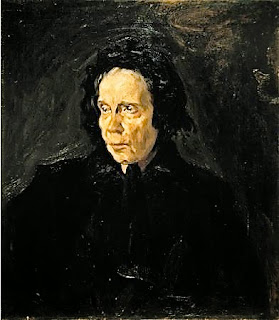 The pieces on view, installed chronologically with few exceptions, clearly show how Picasso's genius manifested at an exceptionally early age. The artist is said to have sketched before he could talk.  At seven he took lessons from his father, an academic painter and instructor.  By nine, he was making masterly works.

Paintings and drawings from the artist's teens are executed with a virtuosity that belie the artist's age.  Panels of small oil landscapes capture the light and essence of the countryside. Portraits are preternatural in their psychological penetration. 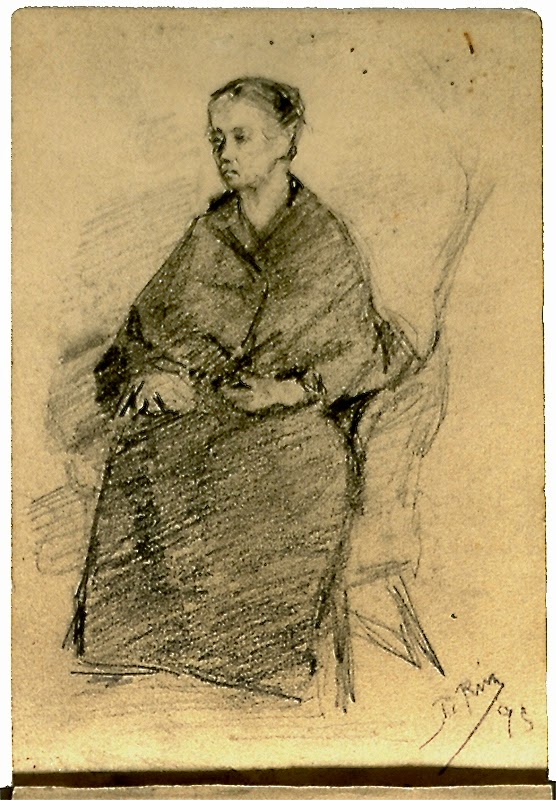 The image of  his paternal Aunt Pepa is a case in point.  Created when Picasso was fifteen, the portrait pulsates with life and imparts a powerful sense of the sitter's personality.  A year before, at age fourteen, the artist sketched his aunt seated in an armchair.  The drawing, from an 36-page album of sketches, like the subsequent painting, distinctly evokes the aunt's character. 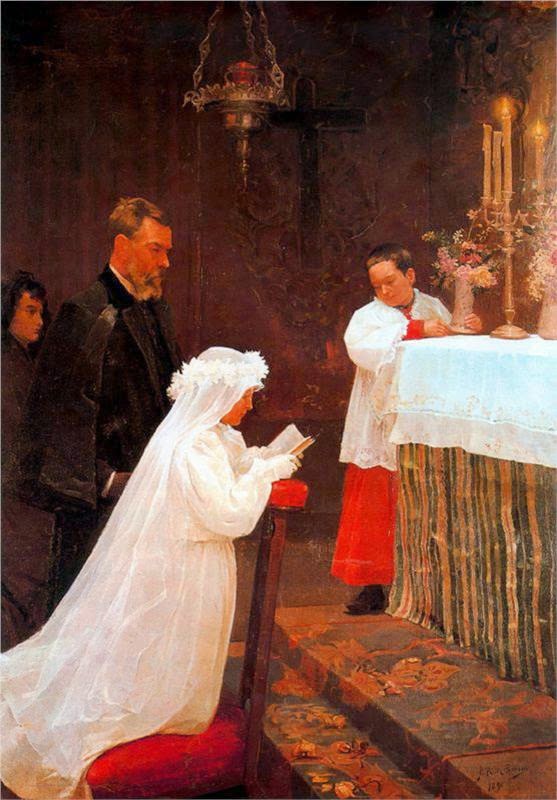 First Communion and Science and Charity mark a turning point in Picasso's career.  Impressive in their narrative content, these works exhibit extraordinary technical skill and a sophisticated handling of composition and color.  The spectator is drawn into the scenes by compositional diagonals. Viewers become attendees at that which is taking place.  Colors have depth and richness.  In First Communion, the white of the communicant's dress  is filled with pale hues of blue, gold and pink.  Browns, blues, pinks, yellows and whites activate the walls of Science and Charity. The paintings are formidable achievements for an artist of any age; astounding for a teen of 15 and 16 years.  They brought the artist much acclaim. 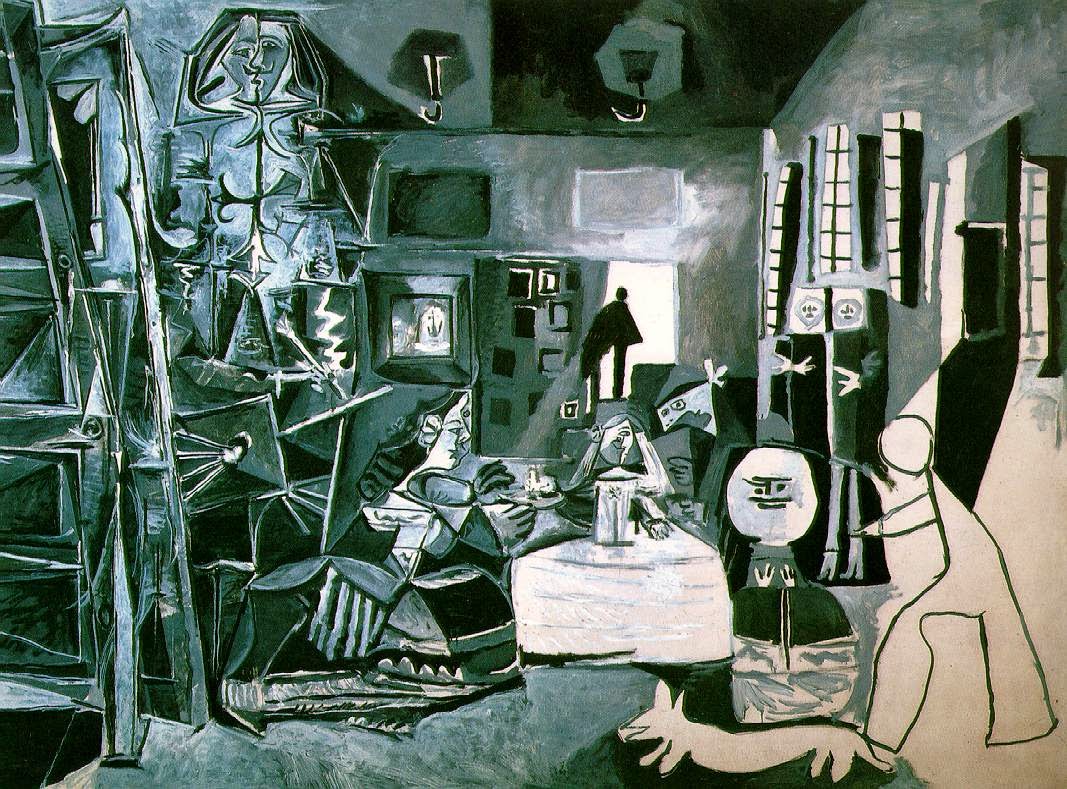 Although successful in the then popular realistic style, Picasso quickly abandoned it.  He wanted to pursue painting that was not done before. Again and again, he would abandon his achievements and seek something else, a new way of seeing.  This pursuit is particularly evident in the three galleries devoted to works from the artist's Las Meninas series.  Here are placed side by side studies completed in the same day and those done one day after the next.

In 5 months, Picasso produced 58 works: 44 deal directly with the Velázquez's masterpiece; 9 involve representations of pigeons which the artist saw from his studio's window; 3 are landscapes; 1 is a portrait of his wife Jacqueline; and 1 is a painting predominated by a piano and its player (The Piano). 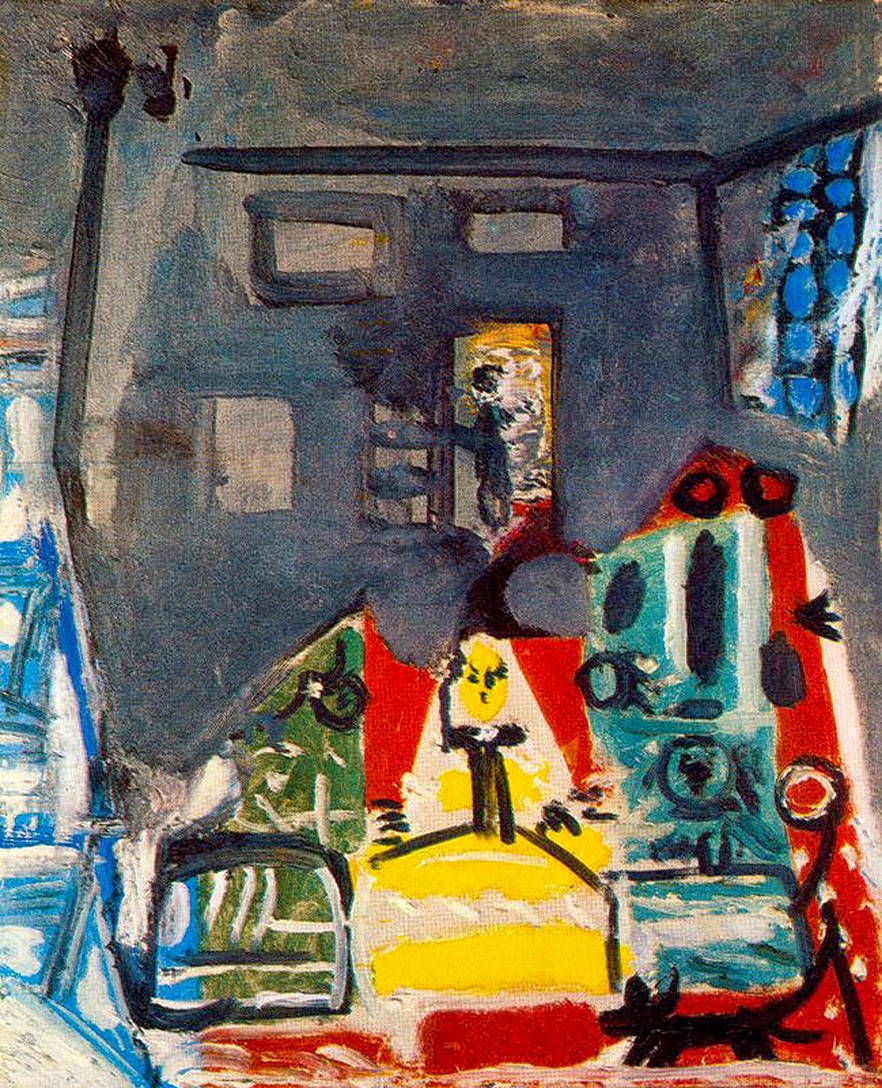 Paintings in the series are hung in such a way Picasso's exploration of Velázquez's work becomes palpable.  On this writer's visit, an oil completed on September 18 was paired with one completed on September 19.  A painting from October 2 was next to one from October 3.  Beside each other were four paintings from October 24.  Six from November 17 formed a group on another wall.  Confronted with the artist's outpouring of creativity, viewing becomes an intoxicating experience. 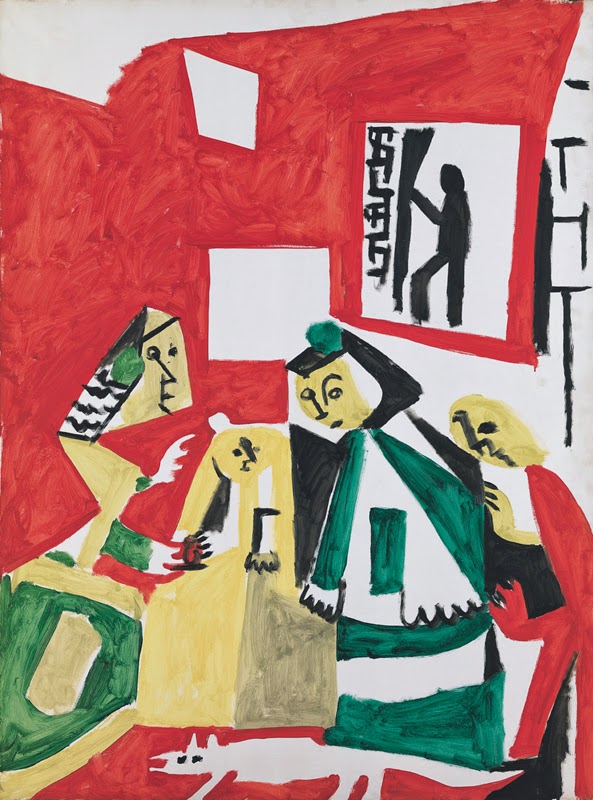 The Museu Picasso also highlights an aspect of Picasso traditionally overlooked.  This is the artist's long-term friendship with Jaume Sabartés (1881 - 1968).  The museum's very existence may be attributed to this man. 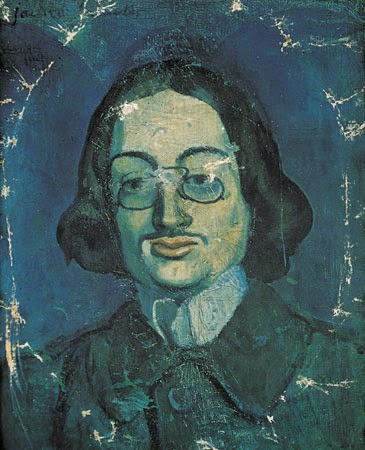 
Sabartés was an artist and writer of prose and poetry.  He met Picasso in 1899 and became part of the painter's artistic circle in Barcelona and later Paris.  Always an enthusiastic supporter of Picasso's work, he wrote about the artist's life and art.

In 1935, he became Picasso's personal Secretary. Twenty-five years later, Sabartés initiated the founding of a museum devoted to Picasso. In 1963 the museum opened.  At the time, its holdings were primarily made up of Sabartés's personal Picasso collection.  In fact, the museum at first was named, the Sabartés Collection.

From the year they met, throughout his life, Picasso drew, sketched and painted his friend.  A number of these portraits may be seen at the museum.  They attest to the closeness of the two men and reveal a Picasso who delights in the intimacy of a lasting, close relationship. 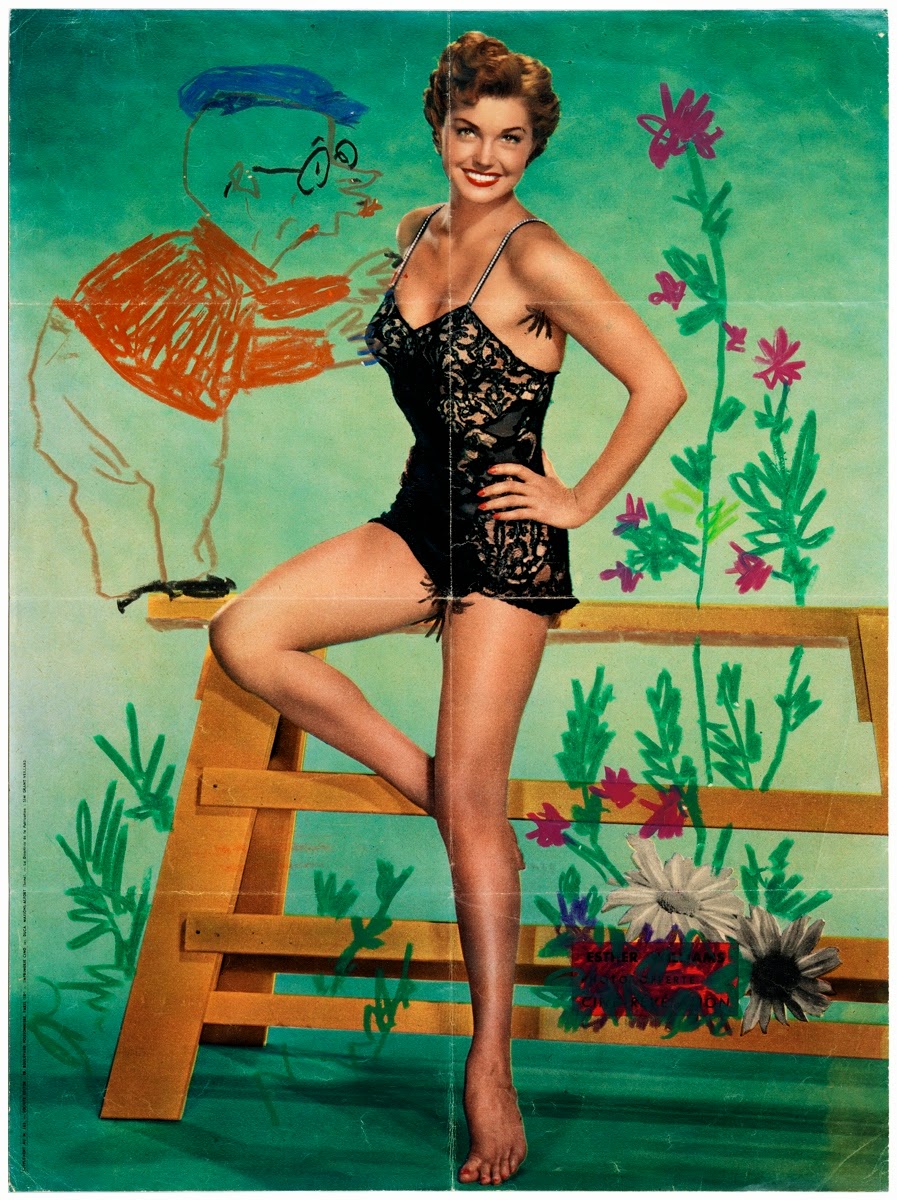 My experience of revisiting the Museu Picasso made me remember a viewing truth: when the opportunity presents itself to see works by a great artist, don't miss it.

*See image below for reference.

Posted by ArtWithHillary at 3:04 PM