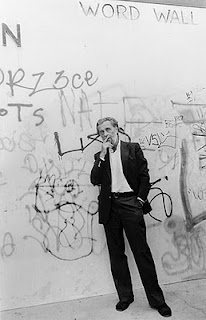 Leo Steinberg
Photograph by Pamela Blackwell
Leo Steinberg, the eminent art historian, died Sunday, March 13, 2011. I was one of his students in the early 1970s. He mentored my master thesis. We became and remained friends.
It is difficult to describe such an extraordinary man. I go to the internet. A google search, “Leo Steinberg obiturary”, brings forth pages of online references. Undaunted, I begin to explore. After double-digit reviewing, my thoughts wander to one of Steinberg’s habits. He read The New York Review of Books and would enjoy grading contributors’s essays: a “C+” here, a “A-” there, some “B”s. Similarly, I rate my readings. I can almost hear Steinberg’s distinctive voice: “B”, “A”, definitely “C”. I think he would have been entertained by the exercise. Thus, here are few comments along with the hyperlinks to three of the commemorative ruminations this writer deems “A” or better.
I begin with the traditional style obituary, “Leo Steinberg, Art Historian, Dies at 90”, by Ken Johnson, art critic and writer for the arts pages of The New York Times. This is a thorough, well-informed introduction to Steinberg’s achievements. I have two additions:
(1) Steinberg was a 1984 National Book Critics Circle Award criticism finalist for The Sexuality of Christ in Renaissance Art and in Modern Oblivion (Pantheon)*;
(2) Steinberg was a recipient of the MacArthur Fellowship, also known as the genius award, in 1986.
Next is the more personal words of Gary Schwartz, an art historian specializing in seventeenth-century Dutch art and a good friend of Steinberg. His insightful remarks, “Leo Steinberg (1920-2011)”, are a lesson in art criticism. Schwartz includes a wonderful account of the way Steinberg went about looking at a work of art and points out how his writings have significance not only for the study of art history but for all the humanities.
Last is Fred Sanders’s “Leo Steinberg Looked at Art”. Sanders, a Protestant theologian, focuses on Steinberg’s explanation of the Christ figure in Leonardo da Vinci’s Last Supper. This straightforward essay makes lucid Steinberg’s exhaustive interpretative methodology.
Alas, I am unable to pass on what I consider the best eulogy. At the memorial service, Shelia Schwartz, Steinberg’s assistant for over forty years, read a letter from a former student. This was written by Kevin Salatino, Director of the Bowdoin College Museum of Art. The letter expresses eloquently how the mentorship of Leo Steinberg changed his life and permanently altered it for the better. Salatino articulated the thoughts of many.
In numerous ways Leo Steinberg is irreplaceable. His knowledge was catholic. His verbal and written communicative abilities were exceptional. His curiosity and intellect were without peer. His intelligence had magnanimity. His humanity was profound. His wit was ever present. His teaching had warmth and generosity. His friendship was non-judgmental, accepting. With Steinberg, no subject was too insignificant or proscriptive for discussion and analysis. He enriched the world with his thoughts and reflections. His contributions to art history and human understanding will always be remembered.
*Note 2nd edition: The Sexuality of Christ in Renaissance Art and in Modern Oblivion. Second Edition, Revised and Expanded. Chicago: The University of Chicago Press, 1966.
Posted by ArtWithHillary at 7:32 AM