The Spectacular Design of The Red and White Quilt Show 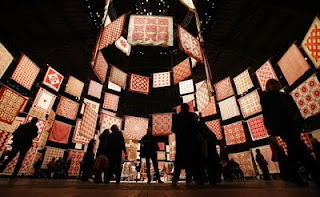 Visitors gasped when they first saw the 651 quilts in the Armory’s vast Hall, some 55,000-square-feet of open expanse under an 80-foot-high barrel vaulted roof. The coverings ranged from 1856, the earliest that could be dated, through the twenty-first century. Most were from the nineteenth century. They appeared weightless, perched high and low as if they could fly. The variety of the bright, clear red and white patterns seemed limitless. They grabbed attention by interacting with each other, the viewing public and the hall’s space. It was an astounding sight. How did this come about? 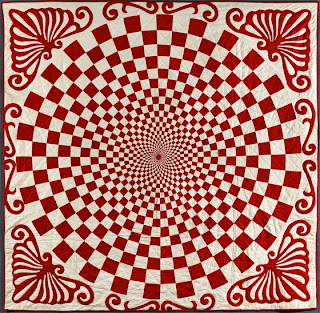 Artist Unidentified, Vortex Quilt, United States, 1890-1910,
pieced and appliquéd cotton, 80 x 82 in., Collection of Joanna S. Rose,
Photo by Gavin Ashworth
The quilts were from the collection of Joanna S. Rose who has been accumulating American red and white quilts for over fifty years. Her collection numbers more than a thousand. Even though she has no recorded inventory, she has never purchased the same pattern twice. The colorfast nature of the red dyed fabric accounted for the popularity of red and white designs. The red did not run or fade and quilters desired it.
For Mrs. Rose’s eightieth birthday, her husband Daniel Rose, chairman of the real estate development company Rose Associates, asked her want she would like. Mrs. Rose wanted two things: something she had never seen before which was to see all her quilts at once and to give a present to New York City. Working with the American Folk Art Museum, which happens to be celebrating the Year of the Quilt, the Rose family secured the Armory site and made funding available so admission to the exhibit would be free. Mrs. Rose, who participated in every aspect of the show, asked that the display take in the entire collection, make use of the hall’s size and not be too curatorial. She desired people to visually enjoy the quilts. Thinc Design was one of several firms who had submitted proposals. 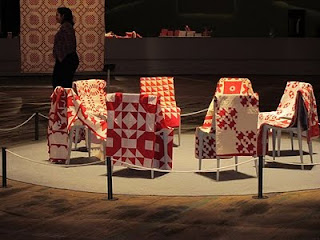 Infinite Variety: Three Centuries of Red and White Quilts
Park Avenue Armory, March 25-30, 2011, Installation View,
Photo from The Martha Blog
Thinc’s winning scheme centered on a circle of chairs draped with quilts which represented the social circle of women quilters. From this issued a fifty-foot high spiral of quilts signifying a whirlwind of creativity. Six circular pavilions that rose thirty feet surrounded the central gyre. Quilts with bold, strong designs were hung high while those thought to have required a closer look were placed on lower levels. To make possible two-sided views, each quilt was scaled and matched back to back with ones of the same size. Visitors had to go around and inside each hanging circles to see every one. Views changed from the comprehensive - taking it all in - to the intimate - examining in detail an individual piece. The quilts appeared as if nothing held them up, an effect that was achieved by an inventive use of cardboard tubing and cable supports to create the large structures. About a dozen notable bedcovers were showcased on one side and, at the back of the Drill Hall, a wall of hanging quilts acted as a backdrop to the entire show. 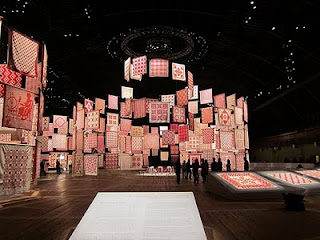 Infinite Variety: Three Centuries of Red and White Quilts
Park Avenue Armory, March 25-30, 2011,
Installation Entranceway View,
Photo from The Martha Blog
The exhibition also included a cafe, gift shop and strategically placed curved seating that allowed visitors to rest, absorb everything before them or to exchange thoughts with others. Apart from a short introductory text on a large podium at the entranceway, there wasn’t much explanatory material. The show’s emphasis on visual experience may have accounted for the paucity of description but not much is known about many if not most of the quilts. They were made by common folk for a utilitarian purpose not created as high art destined for museums. 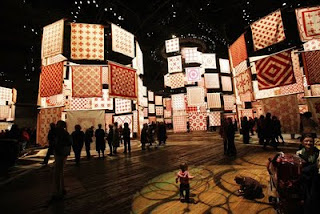 Infinite Variety: Three Centuries of Red and White Quilts,
Park Avenue Armory, March 25-30, 2011, Installation View
Although the coverings were amazing, it was the achievement of the display that elicited the visitors unqualified positive responses. This was the design firm’s accomplishment. According to Tom Hennes, Principal and Founder of Thinc Design and whose grandmother made quilts, about a half dozen people initially worked on the conception. They would meet, discuss, go their respective ways and come back to exchange ideas again. Central to their approach was collaboration and innovation - to think about artworks and exhibits in new ways. Sherri Wasserman, Thinc Design Strategist and whose mother happens to be a quilter, came up with the idea of a quilting circle and the use of repeated circular elements. This led to the project’s extraordinary final design.
For those who missed Infinite Variety: Three Centuries of Red and White Quilts, the American Folk Art Museum hopes to have the show travel and will publish a illustrated catalog within the next two years.
Forthcoming are more projects by Thinc Design. The firm is the lead designer with Local Projects for the Memorial Museum exhibitions at the National September 11 Memorial & Museum, scheduled to open next year.
Posted by ArtWithHillary at 1:14 PM