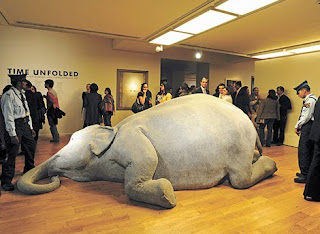 Bhari Kher, The Skin Speaks a Language Not Its Own, 2006,
bindis and fiberglass, life-size,
Kiran Nadar Museum of Art (KNAM), New Delhi, India
A vibrant art scene has evolved in New Delhi, India’s capital city. Fine art galleries and two private museums are open to the public. At Delhi’s 3rd India Art Summit this past January, close to 130,000 people came to see works from eighty-four participating galleries.
Recently I visited the city determined to get a taste for the new art scene. A warning is necessary. Crowded and limited public transportation, all types of vehicular traffic, poor roads, inferior maps, and much new construction make traveling in Delhi very difficult. Furthermore, all the drivers I used were unfamiliar with the places on my agenda. I persisted in my quest and was rewarded. 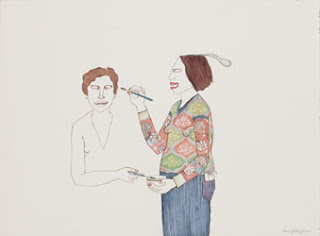 Dhruvi Acharya, Untitled, 2010,
water colour on paper, 10 x 14 in. (25.4 x 35.6 cm),
Threshold Gallery, February 2011 exhibition, New Delhi, India
A gallery-lined narrow street in the city’s Lado Sarai district was one of my first stops. Here are about ten galleries among which are four or five outstanding contemporary dealers. These gallerists exhibit art of considerable merit. Threshold, Ragini, Exhibit 320, and Art Motif are four of my favorites. I particularly liked Threshold’s group show, Of Humour, Wit & Satire. Both amusing and serious at the same time, the show’s talented artists demonstrated that humor is a legitimate pursuit of art.

In the Neeti Bagh area, Gallery Nature Morte offered a display by the thought provoking, talented Indian artist duo Thurkral & Tagra. These two address issues of modern sexual practices against the background of traditional notions of sexuality. The show was frank and explicit at times. For me, it was quite an unexpected exhibit to be seen in an Indian art gallery. Gallery Nature Morte partners with the New York gallery Bose Pacia. In addition, there is a Nature Morte gallery in Berlin.
On view in the nearby Talwar Gallery were Ranjani Shettar’s haunting sculptures. Transitory shadows and silhouettes are incorporated into an encompassing art form. The work is quite beautiful. Talwar also has a gallery in New York. I recommend a visit.

Tyeb Mehta, Blue Bird, 2007,
acrylic on canvas, 49 x 39.5 in. (124.5 x 100.3 cm),
Vehedra Gallery February 2011 exhibition, New Delhi,India
The Vadehra Art Gallery in the Defense Colony area was exhibiting an affecting selection of works by Tyeb Mehta. This illustrious artist was one of the leading post-colony Indian modernist whose death two years ago was greatly mourned. Vadehra has two other locations in Delhi and a separate book store. It has a branch, Grosvenor Vadehra, in London as well.
I took a gallery break and went to CMYK Book Store on Lodhi Road. This enjoyable, lively store is well-stocked with books on architecture, art history, photography, artists, design - anything related to art. You can pick up tips on what to see from the friendly, conversational staff and browsing, art-focused customers.
Two private museums are somewhat difficult to find but should not be missed. The Kiran Nadar Museum of Art (KNMA) opened just in time for the India Art Summit. Located in Saket district’s new DLF South Court mall, this museum’s first show is a knock-out. The exhibition is drawn primarily from Kiran Nadar’s personal collection. Ms. Nadar, wife of billionaire technology founder Shiv Nadar, has been an aggressive buyer of modern and contemporary Indian art for over two decades. Now she is sharing her holdings with the public in her own museum. Free and situated in a mall, the museum hopes to attract many visitors. Among the first-rate works to be seen are Bhari Kher’s bindi-covered life-size elephant, Anish Kapoor’s untitled electric blue disc with its nod to Chuck Close’s fractured images, S.H. Raza’s geometric abstractions as brilliant as those of Howard Hodgkin’s or Hans Hofmann, and Subodh Gupta’s scooter with Indian family, a sculptural commentary on Indian life. This well-installed exhibit fills some 18,000 square feet of gallery space. If this is an example of future shows, the Delhi art world is in for some treats.
A hint to those who try to find it: the South Court mall is in the back of and continuous with the large Select CityWalk shopping mall. If you are facing the front of the mall before it’s parking/drop off/pick up area, the museum is located on your left, behind the CityWalk retail store building. A left side street will lead to the KNMA which has space for parking in front of its main entrance.
The other must see museum is the Devi Art Foundation. It is located in Gurgoan, a suburb of Delhi in the neighboring Haryana state about nineteen miles south of the city center. Many multinational corporations chose to have their office operations in the area which resulted in tall office towers and high-rise apartment buildings. The foundation takes up two levels of Sirpur House, an attractive modern building designed by the Indian architect Aniket Bhagwat. 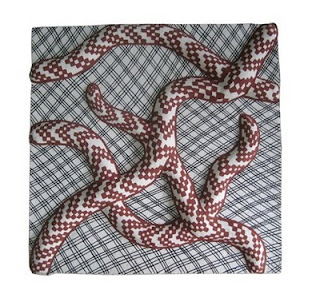 Devi Art Foundation, New Delhi, India
Anupam Poddar and his mother Lekha established the foundation in 2008. As far as this writer can ascertain, it is effectively India’s first museum of contemporary art. The Poddars, who own a successful upscale hotel company, amassed an estimated 7,000 pieces of contemporary, folk and tribal Indian art. Art is their passion. At the museum I saw the intelligent, well-curated exhibition Vernacular in the Contemporary, Part I. The show was comprised of works from the Lekha and Anupam Podder collection in addition to newly commissioned pieces from artists generally classified as folk artists or makers of tribal or traditional art. The foundation provided resources for the artists’s projects. Judging from this show and catalogues of past exhibitions, the Devi Art Foundation is a significant addition to India’s cultural institutions.
Another hint for locating: the Devi Art Foundation is in a building on a side street across from a large complex called Apparel House which houses permanent showrooms for manufacturers/exporters of Indian garments and a convention/exposition facility. It is relatively easy to find. To its left is a side street where Sirpur House is situated. The Devi Art Foundation Web site has a site map but it is confusing to follow.
There is more going on in Delhi’s art world. If you go, try to get The Delhi City which is a weekly tourist publication. It has a fairly comprehensive listing for galleries and exhibitions with a separate section for photography shows. What you see will no doubt be stimulating.
Posted by ArtWithHillary at 9:23 AM