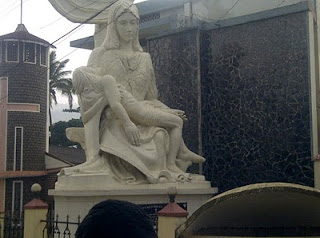 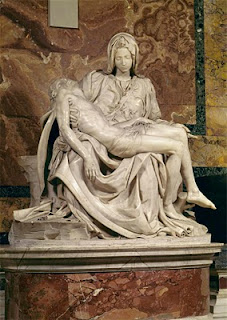 Michelangelo Buonarroti, Pietà, 1498-1499,
marble, 68.5 x 76.8 in. (174 x 195 cm),
St. Peter’s Basilica, Vatican City, Italy,
Photo: Scala Archives
With many levels of meaning and the ability to illicit emotions not normally associated with inanimate objects, these artworks may become the focus of personal or public acts. A case in point was the brutal attack on Michelangelo’s Pietà in 1972 when a mentally disturbed man hammered away at the sculpture yelling, “I am Jesus Christ - risen from the dead”. Another instance occurred in 1974 when a man protesting a political action concerning the Vietnamese My Lai massacre, wrote “KILL LIES ALL” on the surface of Picasso’s Guernica.
As a consequence of the impact and fame of these iconic images, even a poorly conceived replica of one can convey some of the original’s attributes and meanings. The inept copy may draw attention to what made the master work great and lead to a renewed appreciation of the source. The imitation can refresh memories and help viewers look anew at something that had become all too familiar.
I was reminded of this while driving through Kumily, a small city nestled in the Western Ghats mountains in the South India state of Kerala. With a population of approximately 5,000, Kumily is more village than city. 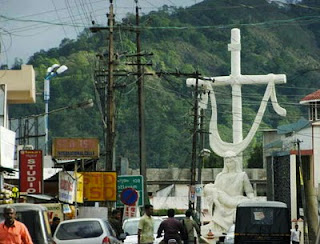 Kumily, India, Center of Town,
Photo: Google Images
At its center, the narrow main road splits in two creating a triangular space which is dominated by a larger-than-life copy of Michelangelo’s Pietà. 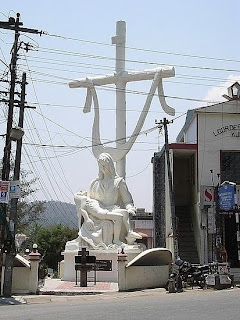 Unknown Indian Artist after Michelangelo, Pietà,
c. 1990, cement and stucco (?),
Kumily, India,
Photo: Google Images
The Kumily sculpture is set before a huge crucifix draped with a shroud-like cloth. Thus, the crucifix and cloth explain the Madonna’s lament.
Although Kumily has three churches, it is still quite astonishing to find such a prominent Christian image in a predominately Hindu country.
What did the Indian artist make of Michelangelo’s Pietà? The Kumily work is close enough to the original to be recognizable as a copy. It is not, however, a quote. The Indian artist did not grasp Michelangelo’s achievement. The Italian master created an image where a supine grown man fits naturally on the lap of of a women. He did this by enlarging the Madonna’s thighs and drapery in such a way that her proportions appear normal. Spectators are unaware of anatomical distortions. In this small South India city’s Pietà , the Christ figure barely is contained by the Virgin Mary. Although Mary is too large in relation to the size of her adult son, it looks as if Christ may slide off his Mother’s lap at any moment.
This pitiful imitation made me think about Michelangelo’s renowned Pietà and revived my understanding of and respect for this outstanding work of art. Such is the benefits that may come from bad art.

Note: Dangerous traffic patterns (as anyone who has been to India knows) prevented my stopping for a longer look at the Kumily Pietà. A quick hop in and out of my car enabled one photo. Please excuse the quality.
Posted by ArtWithHillary at 8:14 AM