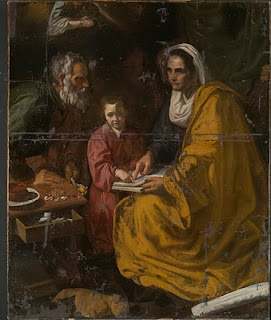 Attributed to Diego Rodriguez de Silva y Velázquez,
The Education of the Virgin,
c. 1617-18, oil on canvas, 66 1/8 x 53 9/16 in. (168 x 136 cm),
Yale University Art Gallery, New Haven
The Education of the Virgin, a painting recently attributed to Diego Rodriguez de Silva y Velázquez, will go on view December 9 at the Yale University Art Gallery. The work was given to the Gallery in 1925 along with other Spanish paintings. In poor condition, it remained out-of-view all these years.
In 2002, Laurence Kanter, Curator of European Art, was surveying the Gallery’s storage area and noted the remarkable quality of the painting. It was identified as the work of an unknown seventeenth-century Seville artist. He earmarked it for restoration. Two years later, the painting caught the eye of John Marciari, Curator of European Art and Head of Provenance Research at the San Diego Museum of Art, who was working with Kanter. At the time Marciari was the Nina and Lee Griggs Associate Curator of Early European Art at the Yale University Art Gallery. By 2005, Marciari was convinced The Education of the Virgin was the work of Velázquez. Thus begun some five years of extensive research and analysis.
This past summer, news broke that the painting had been attributed to Velázquez. Marciari published his findings in the 2010 July-September issue of Ars Magazine. His article delivers cogent arguments in favor of the attribution. If it is by the Spanish master, it would be one of the artist’s earliest works in extant and, of course, enormously valuable. 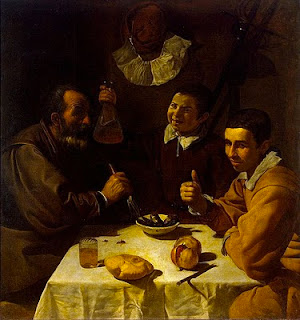 Diego Rodriguez de Silva y Velázquez, The Luncheon, c. 1617,
oil on canvas, 42.7 x 40.6 in. (108.5 x 102 cm),
Hermitage Museum, St. Petersburg, Russia
Marciari links the painting stylistically to Velázquez’s The Luncheon, c. 1617, in the Hermitage Museum, St. Petersburg, Russia . He notes similarities in such elements as the way the figures emerge from the dark background, the handling of drapery and still-life depictions. Technical research revealed that the Yale work was mounted like other early paintings by the master.
Although there is loss in size and paint, remarkable passages remain. You have the opportunity to see it as is until February 20. Go take a look and form your own opinion. The jury is still out.
The Education of the Virgin, attributed to Diego Rodriguez de Silva y Velázquez, will be on view at the Yale University Art Gallery from December 9, 2010 through February 20, 2011.