A Velázquez Portrait Dazzles Once More 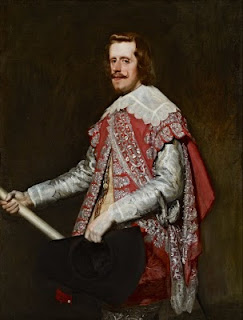 Diego Rodriguez de Silva y Velázquez, King Philip IV of Spain,
1644, oil on canvas, 51 1/8 x 39 1/8 in. (129.8575 x 99.3775 cm),
The Frick Collection, New York
Photo: Michael Bodycomb
The Frick Collection’s portrait, King Philip IV of Spain by Diego Rodriguez de Silva y Velázquez, is resplendent after having undergone a much needed cleaning. Over sixty years had passed since the work’s last major treatment. Although always in good condition, the old varnish had darkened and discolored making the image appear dull and flat. Details were obscured and the painter’s dynamic brush technique was no longer apparent. In the summer of 2009, the painting was sent to The Metropolitan Museum of New York where Michael Gallagher, Sherman Fairchild Conservator in Charge of Paintings Conservation, examined, cleaned and revarnished it. Close study confirmed that changes to the final composition and alterations of the work’s size had occurred.
While this took place, new research by Pablo Pérez d’Ors, former Andrew W. Mellon Curatorial Fellow at The Frick Museum, uncovered the painting’s complex history and unusual circumstances of use. His findings were published in The Burlington Magazine (October 2010, No. 1291 Vol. CLII) in an article co-authored by Michael Gallagher.
The results of all this is the subject of The Frick Collection’s exhibition, The King at War: Velázquez's Portrait of Philip IV. The painting is superbly installed in the center of the Oval Room facing the Garden Court. There is no glass covering the canvas.
Looking at the painting, the first element that stands out is the vibrant crimson of the King’s costume and the way Velázquez’s colors describe a variety of materials. The fluffy red feather of the Monarch’s hat is clearly differentiated from the red brocade jacket. Shades of grey render silver embroidery as well as the metal hilt of the sword and baton. White denotes sleeves, buttons, collar. Beiges and lavenders enliven the whites. Brushstrokes are vibrant and exciting. Paint is laid thinly here and thickly there. Always associated with a free, audacious technique, Velázquez’s brushstrokes here are even looser and appear to be laid down quickly and confidently. 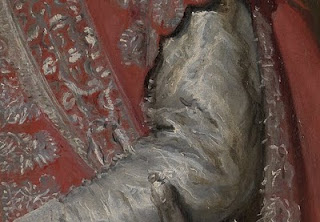 Diego Rodriguez de Silva y Velázquez,
Detail of King Philip IV of Spain
Revisions and exhilarating dabs and dashes of paint reveal the artist’s creative process and produce a feeling of intimacy between the viewer and the painting. Such closeness to the painter’s mind is more typically associated with drawings. We discern how the King’s hat was lowered along with his left hand and sleeve. The sword was moved toward the bottom and the sash hanging from it narrowed. In addition, the flare on the right side of the King’s coat was covered by background paint while the garment’s left side was broadened. The compositional changes enhanced the iconic quality to the image.
Historically, royal portraits were an important form of public relations. They were the only way the public would have knowledge of their King. Few people had access to him - his family and a limited group of courtiers. In the case of this portrait, contemporary diarists recorded its popularity and subsequently the image was reproduced. Since a little over an inch had been removed from the canvas’s bottom, we know about the missing fringe from the King’s knee-high boots through an extant seventeenth-century copy.
This was a special painting with a political purpose. It was created for a specific function as a stand-in for the King at an important church celebration that took place in Madrid. In 1640, the Catalonia region of Spain had rebelled against the Monarch and sided with France. The King sent troops to regain the territory in 1643. A year later, Philip decided to rally his men at the frontline and moved his court there - some five hundred people. As victory approached and was certain, a major religious celebration was planned in Madrid. It would take place before the King returned since he needed to stay in Catalonia for the surrender. Velázquez, the court painter, had accompanied the Monarch to the front. A small temporary studio was hastily devised for his use; the portrait had to be ready for the upcoming Madrid celebration. Velázquez was surely under pressure to complete the work. Indeed, documents reported the King sat for only three sittings.
The painting was completed in time, sent to Madrid and installed under a gold-embroidered canopy in the church where the victory festivity took place. During the ceremony, a sermon given by the Monarch’s preacher, explained the painting’s meaning. The Monarch is not portrayed in the typical somber, black clothes of the Spanish court. He wears his military uniform as his troops would have seen him. This bright red costume decorated with silver would have been easily recognizable, standing out and glittering in the sun. The King is not portrayed as a stern, powerful commander-in-chief or a triumphant victor. He is seen as a loving, forgiving father whose victory was directed by divine intervention. Since the conflict had pitted countrymen against countrymen, Philip IV did not want to punish his rebellious subjects but bring them back to his fold in peace. It is a remarkable painting. 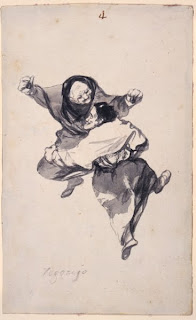 Francisco de Goya y Lucientes,
Regozijo (Mirth), (Album D. 4),
c. 1816-20,brush and ink and wash and chalk,
9 3/8 x 5 13/16 in. (23.8 x 14.8 cm),
Courtesy of The Hispanic Society of America, New York
The Frick’s other exhibition, The Spanish Manner: Drawings from Ribera to Goya, is also noteworthy. This is the first Spanish old master drawing show to take place in New York although New York’s collections are second only to those of Madrid. Why did we wait so long? The works on view are of the highest quality. There are twenty-two sheets by Francisco de Goya y Lucientes as well as over thirty drawings by Jusepe de Ribera, Bartolomé Estaban Murillo and other artists both familiar and unfamiliar. Besides The Frick’s own holdings, there are significant loans from The Hispanic Society of America, The Morgan Library & Museum, The Metropolitan Museum of Art and other institutions. The draftsmanship is extraordinary and the show makes a good case for a distinct Spanish drawing style.
The King at War: Velázquez's Portrait of Philip IV
Through January 23, 2011
The Spanish Manner: Drawings from Ribera to Goya
Through January 10, 2011
The Frick Collection
1 East 70th Street, Manhattan
10:00 a.m. to 6:00 p.m. Tuesday through Saturday
11:00 a.m. to 5:00 p.m. Sundays
Closed Mondays and holidays
Posted by ArtWithHillary at 7:27 AM