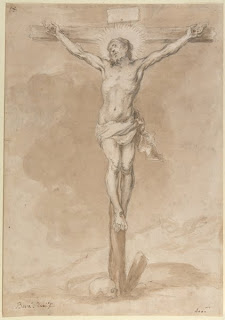 Bartolomé Esteban Murillo,  Christ on the Cross, c. 1665–70,
pen and ink with wash over chalk,  13.2 x 9.3 in. (33.5 x 23.6 cm)
Princeton University Art Museum, Museum Purchase,
Laura P. Hall Memorial Fund
Bartolomé Esteban Murillo’s drawing, Christ on the Cross is on view in The Frick Collection’s exhibition The Spanish Manner: Drawings from Ribera to Goya. There will be more about this noteworthy show at a later date. This poignant Murillo drawing attracted my attention. The figure of Christ combined piousness with with a figurative realism I did not normally associate with Murillo. For the record, I am not a big fan of the artist. I usually find his work cloying, overly sweet and precious. Give me other seventeenth-century Spaniards: Ribera’s earthiness, Zurbarán’s mysticism, above all, Velázquez ‘s brilliance. The Murillo drawing, however, prompted me to reconsider the painter. To begin, I went to The Metropolitan Museum to see Murillo’s small painting, The Crucifixion. It is quite a wonderful painting of a powerful figure of Christ. I thought I could live with this work and enjoy it thoroughly.

Bartolomé Esteban Murillo,  The Crucifixion,
c. 1670-72, oil on canvas,  20 x 13 in. (50.8 x 33 cm),
The Metropolitan Museum of Art, New York,
Bequest of Harry G. Sperling, 1971
The painting and drawing have similarities. I do not imply that there is a direct connection. The drawing is not thought to be a preparatory study. Yet, resemblances do exits. Both, of course, depict a man crucified. A figure depicted on a cross, however, can be rendered in many ways - for example, the torso may turn toward the right or left; the legs may appear closer or further apart. Here, the position of the legs were alike: right knees slightly above left ones. Each of the Christ figures have a robust torso that twists a bit to the left. In both, as touch of realism, a wooden wedge is struck into the ground to support the upright of the cross. Furthermore, drawing and painting have a mediative, other-worldly quality that I found quite appealing.

The Metropolitan Museum’s explanatory label informs that the work may relate to a larger Crucifixion in Madrid’s Prado Museum. An online digital image provided me with satisfaction.
Bartolomé Esteban Murillo,  Christ on the Cross,
c. 1675-1680, oil on canvas, c. 1675 x 27.9 in (54 x 71 cm),
Museo Nacional del Prado, Madrid
The Prado’s Christ’s legs look like they are in the same position as those in the other two works but the figure here is slender. The torso curves a bit to the right. There is no supporting wooden block for the cross. On the ground is a skull like the one in the drawing. As for The Metropolitan Museum Crucifixion, the darkened paint made deciphering foreground imagery impossible.

More comparisons can me made. The Metropolitan painting has Jerusalem in the background while the drawing shows no city. The image quality of the Prado Crucifixion prevented detailed examination. You reader may look and make your own observations. For now, I move on to another connection which interested me.

The Metropolitan Museum note explains that the Murillo painting may have been owned by Sebastián Martínez y Pérez, a renowned eighteenth-century art collector and a friend of the illustrious painter, Francisco de Goya y Lucientes. Goya painted Sebastián’s portrait in 1792 and the portrait is owned by the museum and on view two galleries away.

“Two roads diverged in a wood, and I--
I took the one less traveled by,
And that has made all the difference.”
Robert Frost
The Road Not Taken
(First Publication date: 1916)

Posted by ArtWithHillary at 5:46 AM