Worth a View - A Michelangelo Marble Boy? 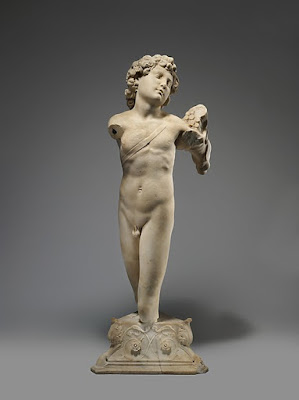 Go look at the Young Archer, a marble boy, attributed to Michelangelo at the Metropolitan Museum of Art. On loan from the French Republic, it has received much publicity but underwhelming visits according to my experience and the guard on duty this past Sunday afternoon.

New York University Professor Kathleen Weil-Garris Brandt created quite a stir in 1996 when the New York Times announced her discovery of a lost early work by Michelangelo. It was located right here in New York City at the headquarters of the French Cultural Services in a mansion on Fifth Avenue. The statue, identified as a young archer or cupid, stood above a fountain in the building’s entrance hall. Many rushed to see it but the marble sculpture was in a position that made close examination difficult. Later that year, Professor Brandt published her research in the Burlington Magazine (Vol. 138, No. 1123, Oct., 1996, pp. 644-659). From the beginning, many leading scholars were dubious. Controversy continues.

The statue is now installed where it can easily be studied on the first floor of the Metropolitan Museum of Art in the Vélez Blanco Patio. I personally began my viewing by looking down from the Patio’s second floor gallery and from this level was impressed with the details of the statue’s curly hair and the elegant lines of what remains of the body. The figure's arms, lower limbs and a vase needed stability are missing.

Downstairs, on closer inspection, I felt uncomfortable with the ungainly proportions of the figure’s narrow shoulders and long, thin thighs. I thought the youth’s head rather large relative to the small, well-developed torso. Comparisons to Michelangelo’s early work seemed stretched.

I did appreciate the remarkable modeling of the figure’s head, chest, rib cage and back. Also of note is the rendering of the slight bulge of flesh alongside the outer edges of the baldric as it crosses the figure’s chest. This indication of pressure on flesh is particularly apparent around the belt's back fragment.

In front of the work, an identifying label reads “Attributed to Michelangelo Buonarroti (1475-1564)”. Nearby, explanatory wall panels recount the piece’s history and offer cogent arguments for the attribution.

The jury is still out. For me, the authenticity as a Michelangelo piece is questionable.

Spend time with this work. You may want to form your own opinion.
Posted by ArtWithHillary at 7:07 AM