Sometimes an experience out of the ordinary awakens our senses. An example would be an amuse-bouche eaten at the onset of a meal which stimulates the palate and leads to the intensification of taste. Similarly a visual sight or sights can alert the mind to the pleasures of seeing. Such was the case for me.

It was the stimuli of works by an audio-video installation artist and the viewing of an indigenous art show that aroused my sensitivity to colors.

First, a little background. This seemed to be the year for the Swiss artist Pipilotti Rist. A major show at New York’s Museum of Modern Art, “Pour Your Body Out (7354 Cubic Meters)”, took place from November 2008 through February 2009. From September to December, Rist’s audio-video installations filled the Museum of Contemporary Art Kiasma in Helsinki, Finland. Then in October, exhibits of her work opened at the Palace of Arts and the Museum of Image and Sound in São Paulo, Brazil.

I have been an admirer of Rist since her exhibit at Art Basil in 1994. She is a complex artist whose work touches on many themes including gender, sensuality, and sex. Yet, it is her heightened use of color that elicits the strongest response.

In an article about Rist, The New York Times Magazine, November 15, 2009, the artist was quoted talking about the yellow of a piece of lemon on the rim of her drinking glass. She explained that if an artist wished to depict that color yellow in film or photography, it would not be the same – it would be less yellow. This is something she does not want to happen in her work – Rist does not want the yellow to appear less so. 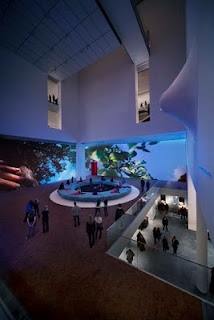 Thus, her multimedia installations are filled with intense color-saturated imagery. She tries to capture the “real” color of actual things such as the rich red of a ripe apple or the pure blue of a clear sky. When I emerge into light from the darkness of watching one of her videos, the natural hues of objects appear more vivid, more penetrating. The world seems to have gone from black and white to Technicolor. Her work activates my color awareness. 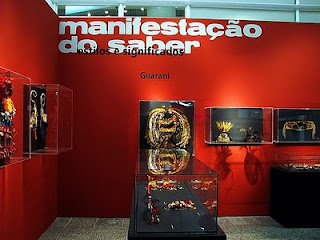 A show of indigenous featherwork that took place at the Caixa Cultural São Paulo in São Paulo, Brazil had a similar impact. The exhibit, “Beauty and Knowledge”, was organized by the Museum of Archeology and Ethnology of the University of São Paulo as part of the museum’s 20th anniversary celebrations. This was a unique opportunity to see some ninety rarely displayed feather and fluff artifacts. 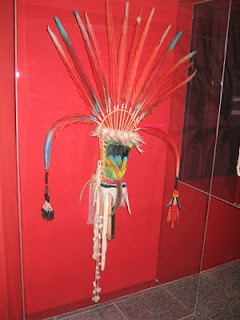 The gallery was surprisingly well lit given the light-sensitive material on view and the varied featherworks produced a dazzling spectacle of colors. Again, I was alerted to nature’s intense hues. I thought about the inability of photography, paint, video or film to capture such coloration.

When I left and walked out onto the city streets, the world seemed brighter and more vibrant. My visual palette had once again been stimulated. My responsiveness to colors awakened.

This can happen to you. Continue to look.
Posted by ArtWithHillary at 6:19 PM