Three Views Of China's Past Give Life To History
Part I 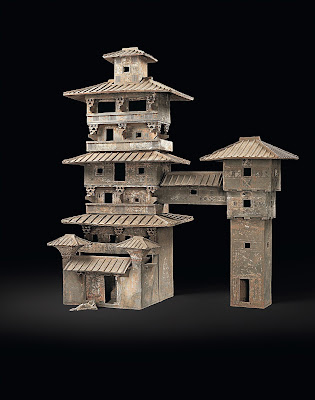 Lucky New Yorkers and visitors to New York! China's past is currently on view.  Ancient objects fascinate and illuminate new aspects of China's history in three noteworthy exhibitions.  The venues, Asia Society Museum, the Metropolitan Museum of Art and China Institute Gallery, together display over 300 works that include sculpture, ceramics, metalwork, painting, textiles and calligraphy.  Many of the artifacts have never before been shown in the West. 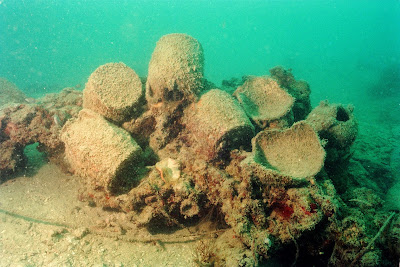 Changsha ewers trapped in a coral concretion on the top of the wreck mound
of the 9th-century vessel off the coast of Belitung Island, Indonesia.
Photography by Michael Flecker
Image provided by Asia Society, New York

Asia Society Museum presents Secrets of the Sea:  A Tang Shipwreck and Early Trade in Asia.  In 1998, fishermen discovered a ninth-century sailing vessel in shallow waters, off the coast of Belitung Island, Indonesia. The discovery and subsequent excavation changed our understanding of global trade and China during the Tang dynasty (618 - 907). 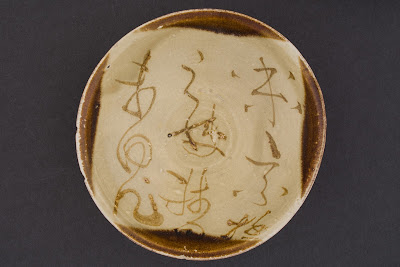 The ship, an Arabian dhow built without nails or pegs, 21 feet wide and 58 feet long,  was returning with cargo from China to the Abbasid Empire, present day Iraq/Iran and a small part of Saudi Arabia. Approximately 60,o00 ceramics were salvaged from the cargo. Originally, there may have been 70,000 pieces on board.  The majority of them were Changsha wares - bowls, jars, large jugs and pitchers. These were everyday, utilitarian items that China produced in quantity for export.  They were  boldly decorated in brown or green glazes. Some 130 to 140  were packed with straw or some other protective material in large storage jars f0r travel.  The ship was filled with these large jars.


The enormous amount of Changsha ceramics on board attests to China's ninth-century mass production facilities as well as their astuteness in commerce.  Variety in design indicates different hands completed the decorations that were tailored to the Middle Eastern markets.   Such exchange of trade via the sea had been unexpected. This ship, and later vessels recovered, substantiate that the maritime trade routes were well-established and extensive by the ninth century. Global trade did not rely mainly on the silk route - the land route - as previously thought.  In fact, sea trade may have been even more important than the overland way.

Export wares were not the only class of goods on the vessel.  There were also high-end objects.  Some 200 celadon and about 300 white ware ceramics were recovered.  These were particularly valued in China and would have been very impressive for a Middle Easterner to own. 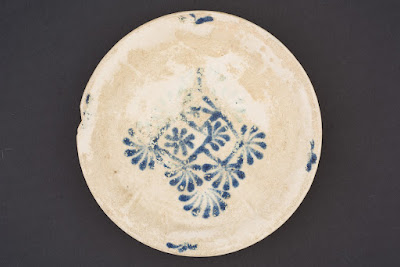 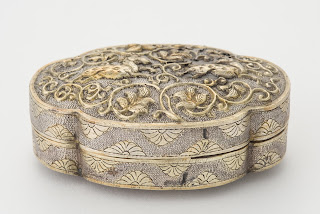 Other treasured goods include bronze coins and mirrors as well as objects in silver and gold. The Chinese used chasing and  repoussé metalworking techniques acquired from the Middle East.  Forms, such as the lobed design, were adopted from Middle Eastern sources.   Again and again the show's pieces illustrate the fusion of cultures - motifs and forms transfer and mix. 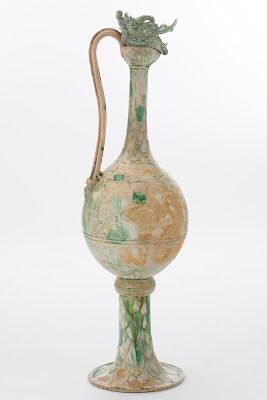 Long-necked ewer,
China, probably Henan Province Gongxian kilns, Around 830s,
glazed stoneware with copper-green splashes over white slip,
H. 40 1/2 x W. 9 x D. 10 1/4 in. (102 x 23 x 26 cm)
Asian Civilisations Museum, Singapore, 2005.1.00900 1/2 to 2/2
Photography by Asian Civilisations Museum, Tang Shipwreck Collection
Image provided by Asia Society, New York
If there is a star of the show, it is the tall long-necked ewer.  It has Middle Eastern lozenge and floral decoration incised on its body and leafy fronds on its neck and pedestal base. In addition, Chinese cloud scroll designs embellish the shoulder section of the vessel's body and top part under the dragon-head stopper. Based on smaller metal prototypes, this ewer probably could not be used because of its slenderness and fragility.   It would serve as a splendid object of art.

Visitors will surely be astounded thinking about the organizational and management abilities of those involved with ninth-century maritime trade.

Learn more about this discovery by going to the museum. Also, don't miss seeing the lecture by Stephen A. Murphy, curator for Southeast Asia at the Asian Civilisations Museum, Singapore, and curator-in-charge for the Tang Shipwreck Gallery at the museum.