It's Been A Long Time Coming: 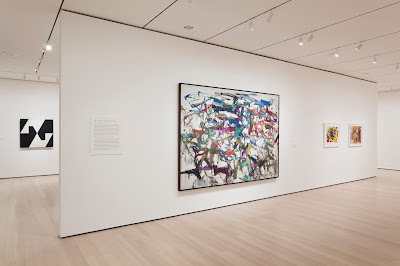 The Museum of Modern Art (MoMA)'s exhibition, Making Space: Women Artists and Postwar Abstraction is an eye-opener in more ways than one.  The show focuses on work produced by women artists from the mid-1940s through the early 1960s - the end of World War II through the feminist movement.  This is a period when women artists had not received much attention. 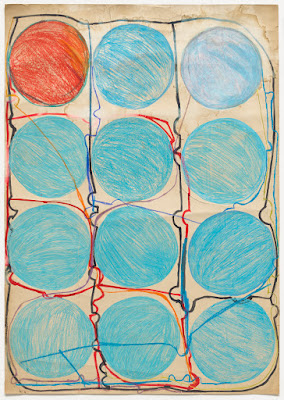 Everything on display, about 100 works by more than 50 international artists, is from the MoMA's own collection.  Nearly half of the works have never, yes, never, been on view at the museum.  Many of the artists will be new to visitors.  The pieces, in a variety of mediums, are consistently inventive, thoughtful and engaging.

The show reflects the MoMA's efforts to increase the representation of women artists.  The museum is not alone in this undertaking but the "Making Space"  show may be the game-changer for any future presentations concerned with art produced in the modern period. Women artists will simply have to be included. 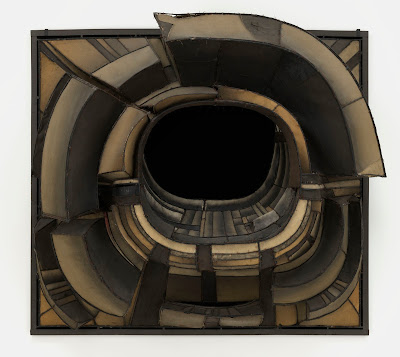 Interestingly,  many works were acquired in the 1950s and 1960s, shortly after the art was made.  The pieces were subsequently exhibited then placed in storage.  There was a drop off in the museum's collecting art by women until the last 15 years.

Late last year into January 2017, the Whitney Museum of American Art mounted the long-overdue show of about 50 works by Carmen Herrera (1915 - ).  About the same time, Virginia Overton (1971 - ) reimagined the museum's sculpture garden and Sophia Al-Maria (1983 - ) had her first United States solo exhibition in the museum's first floor public gallery.  Last summer, the performance artist Jill Kroesen (1949 -) had her first show in over thirty years in the Whitney's theatre.  Coming this summer is the first museum solo show in the United States of the multi-media artist Bunny Rogers (1990 - ).

The Brooklyn Museum currently has three shows featuring women: Marilyn Minter (1948 - ), Georgia O'Keeffe (1887 0 1986) and an exhibition focusing on black women artists.  Not to be forgotten is the museum's Elizabeth A. Sackler Center for Feminist Art which is celebrating its 10th anniversary this year.  The center's museum space has Judy Chicago (1939 - )'s enormous, iconic The Dinner Party (1974 - 1979).

MoMA PS1 is showing the landscape and still life paintings of Maureen Gallace (1960 - ) in addition to a site-specific installation by Cynthia Marcelle (1974 - ), her first solo exhibition in New York.  Opening in October is the first US retrospective of Carolee Schneemann (1939 - ) and the first solo exhibition in New York of the sculptural tableaux of Cathy Wilkes (1966 - ).  MoMA opens a Louise Lawler show in early May; a Martine Syms installation in late May; a film series by the Japanese filmmaker Naomi Kawase in June; and, a Louise Bourgeois exhibit in September.

The Jewish Museum presents a survey of the work of the painter, designer and poet Florine Stettheimer (1877 - 1944) also in May.  The New York Historical Society has opened a new Center for Women's History. The Historical Society's new Tiffany gallery highlights the women design team involved in the creation and making of Tiffany works.

Although much "women's art" has been spotlighted, it is the MoMA's "Making Space" show that makes the most cogent case for the inclusion of women artists in the narrative of modern art, integrating them into permanent museum collections. 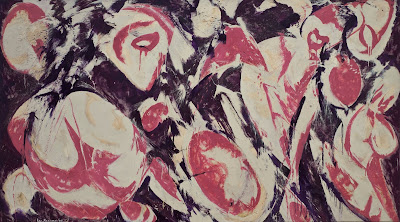 The MoMA exhibition is divided into five sections: Gestural Abstraction, Geometric Abstraction, Reductive Abstraction, Fiber and Line and Eccentric Abstraction.  The first  part has the most familiar works by female artists.  These were women up against the macho world of Abstract Expressionism.  Lee Krasner (1908 - 1984) is here with her bold gestural strokes - a feminine take on aspects of Willem de Kooning (1904 - 1997) and her husband Jackson Pollack (1912 - 1956).  She shows how the color pink can be powerful and sensual at the same time. 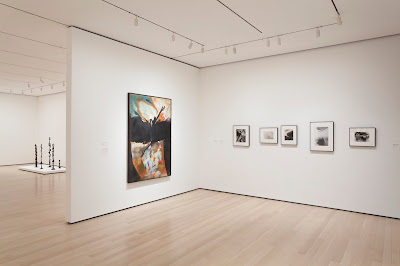 Helen Frankenthaler (1928 - 2011)'s Trojan Gates warrants a double take with its central Rorschach  inkblot-like black formation against a background that seems to be ever evolving into something recognizable.  There is Elaine de Kooning (1920 - 1989)'s Bullfight and Joan Mitchell (1925 - 1992)'s Ladybug as well as Grace Hartigan (1922 - 2008)'s Shinnecock Canal.  Colors sing out in this initial gallery. Photographs, by Lotte Jacobi (1896 - 2990), Barbara Morgan (1900 - 1992) and Naomi Savage (1927 - 2005) exhibited alongside paintings show how the reproductive medium can express abstraction.  Dorothy Dehner (1901 - 1994)'s six part bronze Encounter are animated totems - as if Dehner gave life to David Smith (1906 - 1965)'s Forgings. Dehner was the wife of David Smith. They divorced in 1950. Her work gesticulates as if the bronze pieces are abstracted figures in lively interaction. Interestingly, many of the women artists in the first segment of the exhibition were married to men who were artists.  These women are associated with their male companions.  By the last gallery, the question of who the artist was married to or involved with does not come up. 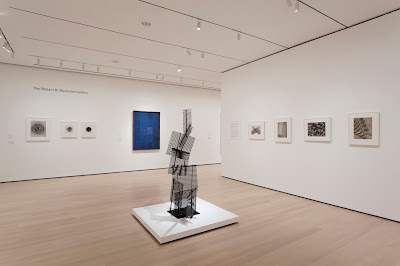 Illuminating juxtapositions abound.  In the Geometric Abstraction segment, the painted iron sculpture Eight Squares by Gego (Gertrude Goldschmidt) (1912 - 1994), a Venezuelan born in Germany, made up of a series of of eight mesh squares, seems to be in a lively dance.  It enters into conversation with the Czech artist Běla Kolářová (1923 - 2010)'s Five by Four construction made up of twenty metal paper fastener grids against a blue background.  These two works relate to the nearby lattice-like gelatin silver print, Untitled, by Gerturdes Altchul (1904 - 1962), a German born Brazilian.  The Altchul photograph is one of a spectacular suite of abstract prints by the artist arrayed along one wall.

Reductive Abstraction offers calm and restfulness with its simplified, minimalist surfaces.  It is a gallery for reflection with elegant works among which are the paintings by Agnes Martin (1912 - 2004) and Jo Baer (1929 - ). 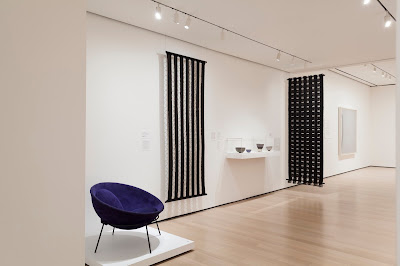 Women after World War II were able to go to universities and art schools with acceptance.  Those pursuing fine arts, however, were typically directed to crafts - weaving, textiles and ceramics.  Design and abstraction were explored.  In one small space, room dividers by Anni Albers (1899 - 1994), ceramic bowls by Gertrud Natzler (1908 - 1971) and Otto Natzler (1908 - 2007) as well as pottery by Lucie Rie (1902 - 1995) and textiles by Vera (Vera Neumann) (1909 - 1993) and Lucien Day (1917 - 2010) attest to these artists' achievements.  Not to be missed is the architect and designer Lina Bo Bardi (1914 - 1992)'s Poltroon Bowl chair.  Designed over six and a half decades ago, this great-looking seat, functional and aesthetically pleasing, can be adjusted to suit the sitter's preference. 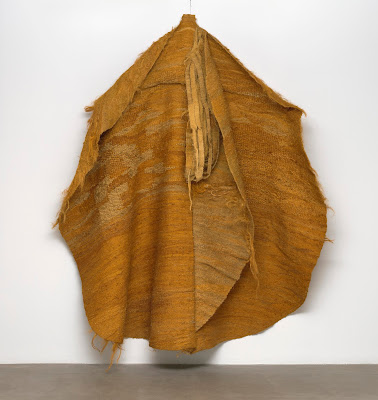 Magdalena Abakanowicz (1930 - 2017)'s prodigious Yellow Abakan commands attention in the gallery devoted to Fiber and Line. Abakanowicz's hanging inspires awe.  Is it something fearsome or sheltering?  Do its appendages allude to body parts? Is it a reference to hanging carcasses - splayed animals like those seen in Rembrandt van Rijn (1606 - 1669)'s Slaughtered Ox or Jean-Baptiste-Siméon Chardin (1699 - 1799)'s Ray or Chaim Soutine (1894 - 1943)'s Still Life with Stingray?  Abakanowicz's sculptures are always engrossing.  Other artists working with fiber or other mediums traditionally associated with craft are Sheila Hicks (1934 - ) with her hand-spun wool hanging, Mira Schendal (1919 - 1988) with her knotted rice paper sculpture and Lenore Tawney (1907 - 2007) with her linen wall piece. 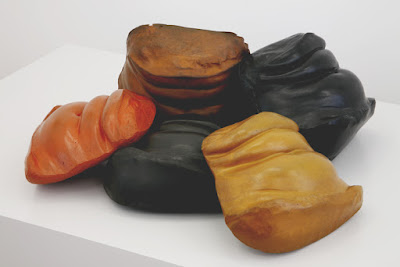 The section called Eccentric Abstraction shows works made of substances not normally used in the making of art.  An example is polyurethane, first produced in the 1960s.  It is used by Alina Szapocznikow (1926 - 1973) in her sculpture Belly-Cushions (Ventre-Coussins).  Eva Hesse (1936 - 1970) employs string over papier-mâché, inelastic cord and enamel paint in her sexually suggestive, suspended 1966 Untitled. Lynda Bengalis (1941 - ) uses beeswax coupled with dammer resin as a hardening agent in her 1967 Embryo II.  Lee Bontecou (1931 - ) employs steel, canvas, fabric, rawhide, wire and soot in her menacing 1961 wall sculpture Untitled.  Bontecou did not like to title her works because she wanted viewers to come up with their own associations and not be influenced by her words.  Atsuko Tanaka (1932 - 2005) makes use of a felt-tip pen and watercolor on paper in her 1956 Untitled.

There is a lot to take in and ponder.  Visitors will want to make more than one visit.  Go and see it.