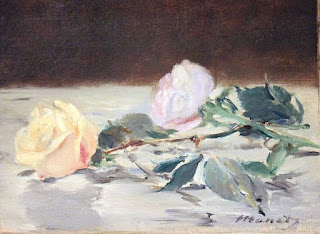 Sometimes you have to go out-of-town to see something from your town.  I was struck by this on a recent visit to the Denver Art Museum's special exhibition In Bloom: Painting Flowers in the Age Of Impressionism.  Among the works by French artists were three paintings by Édouard Manet.  One was the Museum of Modern Art's Two Roses on a Tablecloth.  Not often seen in New York, it was a delight to view.

This still life was part of Willam S. Paley's modern art collection. Paley was founder and chief executive of Columbia Broadcasting System (CBS).  An active MoMA trustee, he became president and later chairman of the museum's board.  Paley died in 1990 and left his outstanding art collection to MoMA.  The Two Roses on a Tablecloth is an example from his bequest. 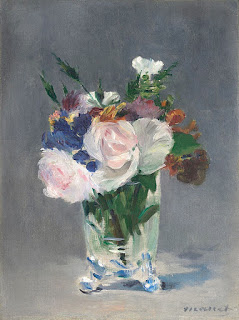 The work differs from the artist's other flower paintings.  These are usually vertically composed and have a lively exuberance. Manet's typical blooms are upright, fresh and energetic. This is not so with the horizontally arranged Two Roses.  Here a poignancy pervades. Why?

By 1882 Manet had been suffering from syphilis for about ten years. Left untreated, he was experiencing the disease's side effects - a degeneration of locomotive powers, intense pain and loss of a sense of bodily positions.  Rheumatism also plagued him.  The organism that caused syphilis was not discovered until 1905.  Treatment prior to the twentieth century was often worse than the sickness itself.

Manet was quite ill during his last years yet, he produced some of his most joyous and intimate paintings.  These are the flower oils inspired by the bouquets friends would bring him.  None are large.  The Two Roses on a Tablecloth is the smallest of the group.  Some have suggested the roses, casually placed on a marble top, are an allusion to the artist's increasing immobility and upcoming demise.  No matter, the loose, fluid brushwork of this and all the late flower works attests to the artist's undiminished abilities. 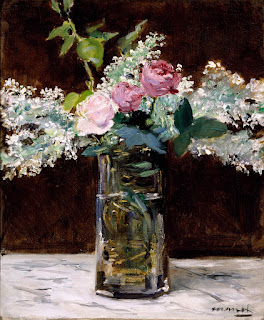 In April 1883 Manet had to have his gangrenous left leg amputated. Less than two weeks later he succumbed to his ailments.  The Vase of White Lilacs and Roses may have been Manet's last or second to last painting.  The other work, a portrait of the model/artist's muse/actress/singer Méry Laurent, was left unfinished on his easel. 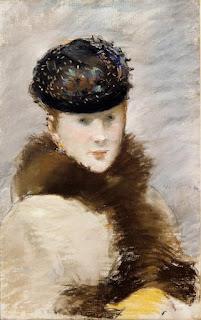 This writer would like to think the Vase of White Lilacs and Roses was Manet's last work.  The lilacs and roses reach across the canvas whose width is unable to contain them.  Writers have noted that the glass vase and blooms create a crucifix configuration.  Others have seen a crucified Christ form in the floral array.  Unlike the MoMA's Two Roses, there is nothing sad about Lilacs and Roses.  These blossoms have vitality and vigor.  As such, Manet's last take on flower still lifes would deny death and misery.  The work embraces life.

Posted by ArtWithHillary at 1:20 PM