Hand To Mind: Drawing To Know

Leonardo At The Morgan 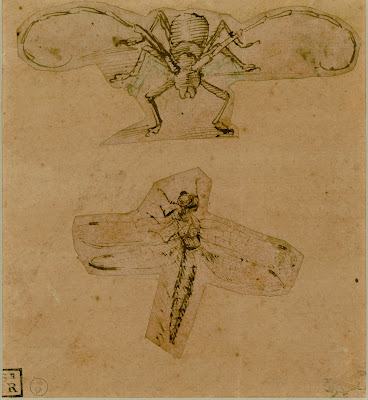 
The Biblioteca Reale*, Royal Library, in Turin, Italy, houses a renowned collection of books, manuscripts and drawings.  The library's Leonardo da Vinci (1452-1519) corpus is one of the best in the world, so the Leonardo loans from this institution present a unique opportunity to see exceptional works.  The exhibition, “Leonardo da Vinci:  Treasures From the Biblioteca Reale, Turin” is now at the Morgan Library & Museum.

The show is relatively small.  Fifteen drawings and a manuscript from Turin  are supplemented by the Morgan’s Designs for a Maritime Assault Mechanism and a Device for Bending Beams and its Codex Huygens**. 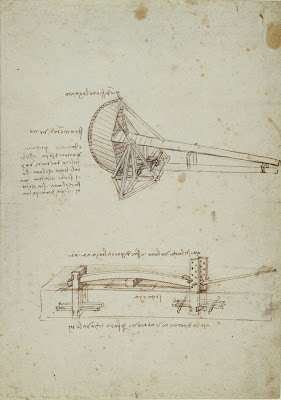 Leonardo is represented by some dozen drawings and a manuscript.  Two of which have never before been seen in New York:  the Head of a Young Woman (Study for the Angel in the ‘Virgin of the Rocks’) and the Codex on the Flight of Birds.  Other works are by the artist’s followers.

Painter, sculptor, engineer, inventor, architect, musician, scientist, military expert, writer and draughtsman,  Leonardo possessed talent to spare.  One tale has it that when the artist was apprenticing with the Florentine painter-sculptor Andrea del Verrocchio he assisted in the master’s Baptism of Christ, presently in the Uffizi, Florence.  Leonardo painted the angel on the left in the painting.  It was so beautiful, legend has it, that when Verrocchio saw it, he gave up painting.  A Biblioteca Reale drawing of Leonardo’s angel’s head, attributed to Verrocchio’s workshop, is in the show.

Leonardo’s prodigious artistry was coupled with an insatiable curiosity.  He observed, inquired and learned ceaselessly.  For him, knowledge was achieved by looking closely at the world.  What he saw, he drew.  Thousands of Leonardo’s drawings survive both in loose sheets and in notebooks.  Flora, fauna, especially insects, birds, horses, and, above all, humans came under his gaze.  Drawing was the means to understanding.   Thoughts were worked out through the hand, so the drawings capture the mind’s processes.  Viewing them allows close contact with the artist while he is thinking as well as with the object he is making.  Seeing becomes an intimate experience.

The exhibit is divided into two sections: Exploring Nature and Making Art.  The first presents the artist’s studies of horses, flying insects, and humans as he attempts to understand the movement of these bodies through the drawn line.  Two studies of dragonflies, done at different times but mounted on the same sheet, attest to the artist’s fixation on flying in his quest for making a flying machine.

Flight is explored extensively in the artist’s Codex on the Flight of Birds.  The manuscript is written in mirror script, a form of writing Leonardo used frequently in his commentaries.  The reverse style writing is read left to right, back to front.  Scholars still do not know why he wrote this way.  Since Leonardo was left handed, some have suggested, the particular script prevented his hand from smudging the ink as would have happened if he had wrote from left to right.  Another theory postulates that writing this way was due to a unusual language organization in the brain. 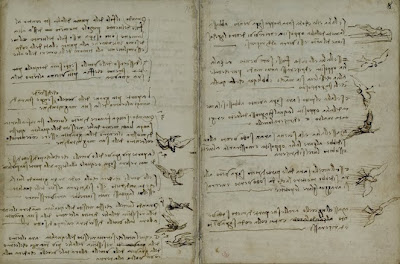 The Codex has a few architectural renderings, diagrams and designs but most of the drawings are of birds.  In page margins, sketches of airborne avians are delineated under different wind conditions.  Birds fly up, down, around.  Leonardo records changes in their wing spans and flight angles as air currents, ingeniously represented by parallel lines, determine their positioning.  The results make clear that the artist learned through the recording of what he saw. 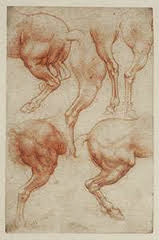 Take a look at his studies of horses.  Throughout his career, Leonardo took a special interest in them.  He drew them from different views, showing light falling on their musculature and revealing how muscles function.  It is known that Leonardo measured and studied a Sicilian horse owned by the son-in-law of Ludovico Sforza, the artist's Milan patron.  Horses’ hindquarters are rendered so realistically in one red chalk drawing, it appears as if the animals may move off the page.  This sheet's label informs that the upper left horse haunch and legs may have been revised by Francesco Melzi, one of Leonardo’s close friends and followers.  This writer does not know if Melzi was left-handed, but the hatching, parallel lines used to differentiate light and shadow on objects, is drawn from lower right to upper left.  Leonardo, a left-hander, drew this way.  Right-handed artists make these lines from lower left to upper right.  Try it. 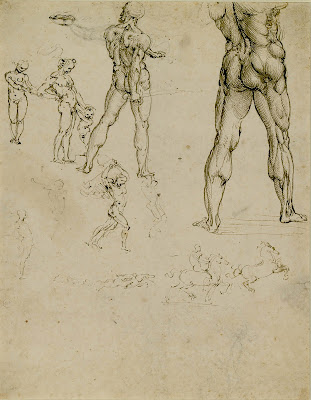 There are some delightfully sketched horses in diminutive scale on a sheet with figure studies.  One horse with rider is in full gallop - front legs forward, rear ones extended back.***  Another is in a trot; and, a riderless one, furthest on the right, rears up on hind legs.  Don’t miss the open mouth in the upper left corner in this same sheet and, in mid-page, the small nude figures each swinging a sword over his head. The large écorché (skinless) figures are in a variety of poses including those of a Hercules seen from the back.  The mythological figure appears in the same posture and point of view in an adjacent drawing of Hercules with the Nemean Lion.


The second part of the show focuses on Leonardo’s portraits, drawings by the artist’s followers and the Morgan’s Codex Huygens.  The chalk study, Three Views of a Bearded Man, shows a slightly melancholy male head in profile, three-quarter and frontal view.  The sensitive handling of the sitter’s features and the use of red chalk, Leonardo's preferred medium for life studies, suggests the drawing portrays a specific individual.  One proposed identity is Cesare Borgia, the son of Pope Alexander VI, who Leonardo worked for as a military architect and engineer between 1502 and 1503.  Cesare was reported to be a cruel sort of fellow but this rather introspective, thoughtful portrayal gives no hint of such behavior.

Leonardo introduced the technique of drawing in red chalk on prepared ground.  The soft quality of chalk made modeling easier than other mediums such as metalpoint or pen and ink.  Chalk made possible soft, hazy contours and the gradually shading of tones into one another similar to the sfumato effect Leonardo created in his oil paintings.  The possibilities of chalk are effectively illustrated in many of the exhibit's drawings, particularly the bearded gentleman. 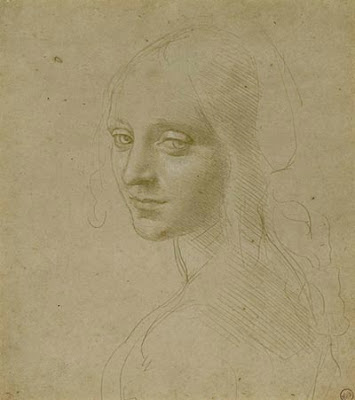 Head of a Young Woman (Study for the Angel in the ‘Virgin of the Rocks’) is the star of the show.  She has been called one of the highest attainments in draughtsmanship.

The woman is the model for the angel in the artist’s painting Virgin of the Rocks.  The painting which exists in two versions - one in the Louvre Museum and one in London’s National Gallery of Art.  The drawing is closest to the Louvre angel. 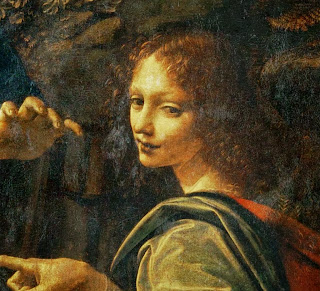 The drawing is in metalpoint, a technique particularly characteristic of Florentine artists.  This is an extremely delicate method of drawing. Artists drew with a metal stylus on a prepared ground - usually the paper was painted with a white pigment mixed with water and a binder.  Marks made with the metal were not easily erased.  To remove, the ground they were on needed to be abraded.  When drawing in this method, pieces of metal were deposited on the ground surface.  Leonardo preferred to work in silverpoint, one of several types of metalpoints.  Silverpoint did not dull as fast as other metals and rendered precise details effectively. When employed, actually pieces of silver were left on the ground.  The silver first appears gray but oxidizes subsequently to a warm brown.  Metalpoint drawing is very subtle. Work in the medium is difficult to capture in photographic reproduction.


Leonardo used white highlights to enhance the vividness of the drawing.  He applied it under the woman's eyes; on her left eye’s inner corner; on her nose tip; on her left nostril; on her lower lip; and in her diagonal facial creases from the corner of her nostrils to the corners of her lips.   Parallel lines define tones and shadows as light falls from the left.

Abstracted, loosely drawn lines about her face appear to be wayward strands of hair.  Between these strokes and the delineated face contours is space which gives the head volume and leaves the viewer with the sense of  depth recession.  She seems to turn in the implied expanse.  It is an extraordinary rendering.

As for the metalpoint medium, Leonardo worked in it early in his career.  He gave it up in favor of the more accommodating chalk.  He never stopped using pen and ink.  What about pencil?  Drawing in graphite was not an option.   Graphite pencils were not yet invented.   A non-round carpenter pencil was devised in the late sixteenth century but, pencils, as we know them, were not successfully made until the eighteenth century. 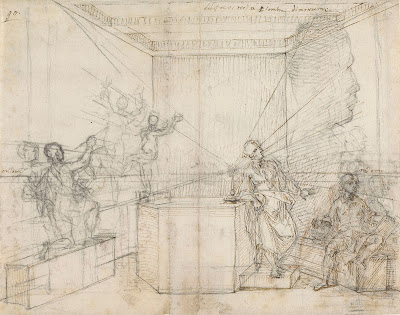 Pages from the Morgan’s Codex Huygens, a late sixteenth-century illustrated treatise on painting closely related to Leonardo's notes on the subject, rounds out the exhibition.  Some of the drawings are exact copies of Leonardo’s now lost originals.

One double page (two joined sheets) illustrates shadows cast by candle light.  It demonstrates pictorially how shadows appear larger as the object gets closer to the light source, in this case, a candle.  The illuminated taper also alludes to knowledge.  In the earlier part of the exhibit, one drawing, Musculature of the Leg, has a poem by Leonardo on its verso.  It relates how moths are attracted to candle light and is a metaphor for the continuous seeker of light/knowledge.  It reminds of Leonardo’s unceasing search to know - his own attraction to light.

Although the splendors of this show are well lit, the general gallery, I felt, is too low and made the exhibition layout difficult to follow.  Another issue is that the Codex Huygens pages are displayed near the center of two glass-topped tables.  Viewers must lean over the table in a rather awkward position in order to see them.  I could not help but wish they were closer to the table edge where the explanatory labels are located.   These are minor distractions in a remarkable show.  Works engage viewers and, at times, are so compelling in their beauty they take your breath away.   Visit the Morgan.

*At the present time, the Biblioteca Reale Web site, http://www.bibliotecareale.beniculturali.it, is undergoing maintenance.
**The complete Codex Huygens can be seen in digital facsimile on the Morgan’s Web site, see Online Exhibitions, Leonardo da Vinci and the Codex Huygens.
***It was not until the second half of the nineteenth century that Eadweard Muybridge invented stop-motion photography   and proved that all four feet of a horse were off the ground when the animal was in a trot or gallop.  Unlike Leonardo's and other artists' horse locomotion descriptions, in trot or gallop a horse's front and rear legs are curled under the body not extended before and behind. 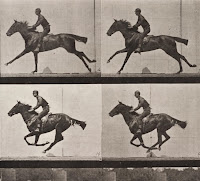 Posted by ArtWithHillary at 2:28 PM