Paintings From the Dutch Golden Age

The Real And The Virtual 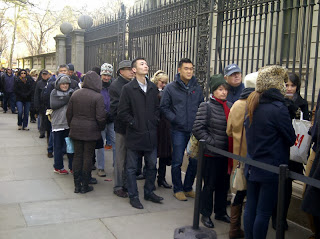 Waiting line at The Frick Collection for
Vermeer, Rembrandt, and Hals:
Masterpieces of Dutch Painting from the Mauritshuis
Photo:  Hillary Ganton

There is no substitute for seeing an actual work of art. Paintings, sculptures, drawings and other creations present a different experience in real life than in reproduction. Size, texture, coloration and placement impact the visual encounter. A sense of the physicality of the “thing”, at least at this time, cannot be achieved via photographic or virtual means. Yet, what has been seen or is to be seen can be enhanced through the virtual medium.  A case in point is the exhibition Vermeer, Rembrandt, and Hals: Masterpieces of Dutch Painting from the Mauritshuis now on view at The Frick Collection.

The Frick Collection's excellent Web site has an informative section on the exhibition. See http://www.frick.org//exhibitions/mauritshuis. There is nothing, however, like the real thing.  Witness the long lines and wait time to see the show. 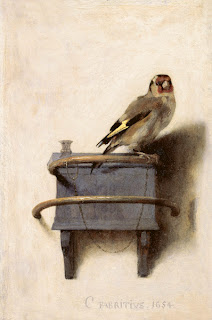 For this discourse, digital images must stand-in for the actual.  Take a look at Carel Fabritius' Goldfinch reproduced here.  A single bird is perched on the top rod of its feeding box against a white wall.  A delicate chain hangs from a loop encircling the finch's resting place. Painted fluidly in broad brush strokes, the color harmonies render this seed-eating songbird with extraordinary illusionism.  The textures of the work and subtle gradations of hues can only be enjoyed in real life.

Should a viewer's curiosity be aroused concerning the painting's history, meaning or the artist who created it, the web offers answers. Go to http://www.frick.org//exhibitions/mauritshuis.

The museum's material on The Goldfinch explains that the painting may have been a cover for an enclosed painting or part of a birdcage. The chain, possibly attached to the bird, would prevent it from fleeing. If so, the work may have some moralizing meaning concerning family life and flight.  Alternatively, the chain  may be attached to a small drinking cup within the feed box.  Goldfinches, a popular domestic pet in seventeenth-century Holland, were known to be able to perform a trick of getting their own water by pulling up a chain with a tiny cup attached from a water container.  No conclusion has been reached and the chain is still open for interpretation.

Readers unfamiliar with the artist learn that he was a student of Rembrandt whose influence can be seen in the skillful handling of paint.  Fabritius worked in Delft and died quite young in the same year the painting was finished.   In 1654, a gunpowder magazine blew up in Delft.  The big explosion left a good part of the city in ruins. Possibly a hundred people died including Fabritius whose studio was next to the magazine.  Most likely, The Goldfinch was one of the last works the artist made.  The painting is the center of a well-received eponymous novel by Donna Tartt which was published this year.  The exhibition includes another artwork on which a book was based, Johannes Vermeer's The Girl with a Pearl Earring.  The 1999 novel with the painting's title was written by Tracy Chevalier.       This best-selling fictional account of the artist, his model and the making of the painting sold over 2 million copies.   A movie (2003) and play (2008) were subsequently derived from the book.  Secondary artistic endeavors attest to the enduring fascination of these seventeenth-century works. 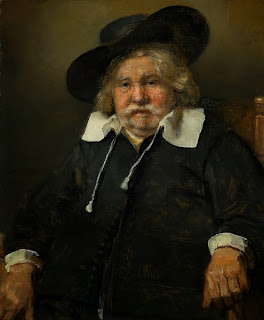 There are four paintings by Rembrandt in the show which allows visitors to survey this master’s early and late styles. The Portrait of an Elderly Man exemplifies the artist’s late period with its characteristic areas of rough broad brushstrokes and thickly laid on paint.  The canvas appears to pulsate as dense pushed and pulled colors contrast with loosely applied oils.  In this portrait, cheeks and collar are rendered viscously while wide loose strokes describe the man's dark garment in a manner so light that the underpainting is seen.

The sitter’s appearance suggests the subject may have been a close friend of Rembrandt's.  His posture is casual;  his collar is open; his jacket is unbuttoned; his hat is askew; and, stubble appears on his chin as if in need of a shave.  It’s as if he just stopped in for a chat and Rembrandt painted him.

The work entered the Mauritshuis collection in 1999.  It was purchased from an English private collection.  England normally does not allow such significant artworks to leave the country.  Since it was going to the Mauritshuis, export was permitted.  To know more, see
http://www.frick.org//exhibitions/mauritshuis. 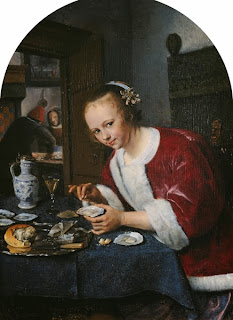 If you want to have fun, seek out a painting by Jan Steen.  This prolific painter had a sense of humor and a joyous manner of representation.  He excelled in depictions of everyday life with an attention to details that was matched by a skillful technique. Although best known for his moralising genre paintings with references to Dutch proverbs and literature, Steen also painted portraits, mythological, religious, and historical scenes.  He is represented in this exhibit by two canvases:   "As the Old Sing, So Pipe the Young", one of the artist's largest works and, Girl Eating Oysters, Steen's smallest canvas.  The former, painted in broad, painterly brushstrokes, warns against the influence of adult bad behavior on the young.  The latter, in which the artist uses a miniaturist-like style, depicts a seductress enticing the viewer to partake of her offerings.  She is putting salt on an oyster, edibles considered aphrodisiacs.  On the table before her is a blue-and-white Delft ceramic pitcher, a wine glass and a silver serving plate with a knife, a half-eaten roll, a mound of salt and a paper cone filled with peppercorns that spill out onto the tray.  In the background, two kitchen servants prepare more oysters.  Behind the woman is a bed with closed curtains.  There is no doubt that she is extending an invitation not only for food but also for herself.

As the Girl Eating Oysters attracts, so does the show.  Still lifes, landscapes, biblical pictures, other portraits and everyday portrayals yield much to enjoy.  Take advantage while these paintings are here - go see them.

The Frick Collection presents free lectures associated with exhibits. Many are webcast live and can be seen on the Frick's Web site or the museum's channel on FORA.tv.  Past presentations may be viewed on the same sites.*

The director of the Mauritshuis, Emilie Gordenker, gave the first lecture for this show.  She provided a good introduction to the collection's history and evolution. For the online video, go to Emilie Gordenker:  "Royal Picture Gallery Mauritshuis".

*For the museum's past lectures visit the Frick's Web site, main menu "Interact", drop down menu "Lectures"  or  proceed directly to www.frick.org/interact/lectures.

Vermeer, Rembrandt, and Hals:
Masterpieces of Dutch Painting From The Mauritshuis
October 22, 2013, through January 19, 2014
Time tickets are required to view this exhibition.

Special Free Extended Viewing Hours For
Vermeer, Rembrandt, and Hals:
Masterpieces of Dutch Painting From The Mauritshuis
Friday Evenings
6:00 p.m. - 9:00 p.m.
First Friday Evening of Each Month Is Reserved For Members.
Posted by ArtWithHillary at 7:56 AM