The Amazing Popularity of Alexander McQueen 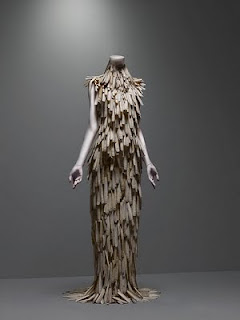 Alexander McQueen (British, 1969–2010), Dress, Voss, spring/summer 2001,
Razor-clam shells stripped and varnished
Courtesy of Alexander McQueen
Photograph © Sølve Sundsbø / Art + Commerce
The Metropolitan Museum of Art’s Costume Institute exhibition, “Alexander McQueen: Savage Beauty”, was the eighth most popular exhibit in the Met’s 141-year-old history and the Costume Institute’s most attended. Its closing date was extended twice, special fee viewing hours were established on Mondays when the museum is usually closed and, for the first time, the Met remained open until midnight on the show’s last two days. 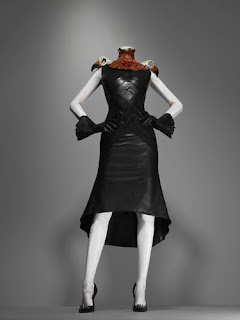 Alexander McQueen (British, 1969–2010), House of Givenchy Haute Couture ,
Ensemble, Eclect Dissect, autumn/winter 1997–98,
Dress of black leather; collar of red pheasant feathers and resin vulture skulls; gloves of black leather
Courtesy of Givenchy Haute Couture
Photograph © Sølve Sundsbø / Art + Commerce
From the public opening on May 4 to its closing on August 7, some 661,509 visitors swarmed the show. There were long lines with many waiting more than 5 hours to see the display - more reminiscent of a rock concert than a museum visit. I would venture that a good percentage of visitors had never heard of the designer until the April royal wedding of Prince William to Kate Middleton. Kate’s wedding gown and shoes were designed by the creative director of Alexander McQueen, Sarah Burton and her team. Ms. Burton had worked side by side with the designer for 14 years. Possibly, Alexander McQueen’s suicide last year at the age of 40 aroused the curiosity of some attendees. He hanged himself in the wardrobe of his tony Mayfair apartment after taking a significant amount of drugs and slashing his wrists.  Regardless, the people came in unexpected numbers and the museum made money surely needed. One estimate is that the Met made a minimum of $14.6 million in revenue (see Jenna Sauers, How Much Did The Met Make Off The Alexander McQueen Show, Jezebel, August 9, 2011).
The fashion conscious obviously knew about the designer. McQueen had married the rigors of classic tailoring with the playfulness of couture dressing using unconventional material. His couture expressed a blend of contrary concepts such light and dark, nature and technology, life and death, beautiful and grotesque. He won the coveted British Designer of the Year award four times; was named the Council of Fashion Designers’ International Designer of the Year in 2003; and, was honored as a BCE, Commander of the Order of the British Empire. 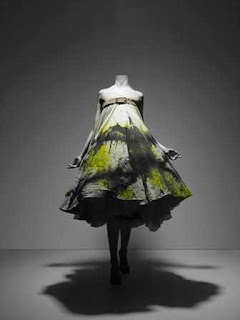 Alexander McQueen (British, 1969–2010), Dress, No. 13, spring/summer 1999,
White cotton muslin spray-painted black and yellow with underskirt of white synthetic tulle
Courtesy of Alexander McQueen
Photograph © Sølve Sundsbø / Art + Commerce
McQueen’s catwalk presentations were frequently off-putting yet mesmerizing. Comparable to theatre or performance art, his shows were compelling. McQueen had said (Harper’s Bazaar, US, April 2007), “I find beauty in the grotesque, like most artists.  I have to force people to look at things.”  He did.
In one presentation, two commercial robots firing black and yellow paint at a model’s voluminous white dress as she spun slowly in circles on a turntable attempting to protect herself from the robots’ shots in apparent fright (spring/summer 1999). In another, mussed up, distraught-looking models, many with breasts and bottoms exposed, teetered down the runway in torn garments (autumn/winter 1995-1996). One show had a model’s elbows and knees constrained by manacles crippling her catwalk (spring/summer 1997). Once he ended a presentation with a model surrounded by a ring of fire (fall/winter 1998).  At an earlier show, he had his models thoroughly soaked in a shower of golden rain (spring/summer 1998). 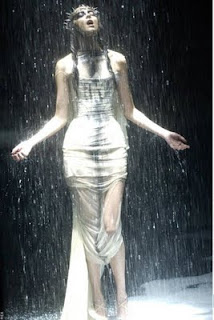 Alexander McQueen (British, 1969–2010), Runway Show,
Untitled, spring/summer 1998
Photo source tumblr
Video source YouTube
Go to  http://blog.metmuseum.org/alexandermcqueen/video/  for highlights from some of McQueen's 1997-2010 runway shows.
The “Alexander McQueen: Savage Beauty” exhibit captured McQueen’s sense of the theatrical. Andrew Bolton, a curator of the Met’s Costume Institute, worked with Sam Gainsbury and Joseph Bennett, production designers for Alexander McQueen’s fashion shows, to curate the extravaganza. They installed 100 garments and 70 accessories in a variety of settings using dramatic lighting, holographic, film and video visuals, music and sounds. Most of the garments were from the Alexander McQueen Archive in London but some were privately lent. The show was organized around the theme of McQueen’s romantic mind. Wall surfaces were differentiated to reflect an aspect of his romanticism. For example, the “Romantic Gothic” gallery, which referred to the designer’s focus on Victorian gothic, was lined with aged mirrors. 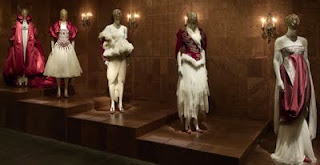 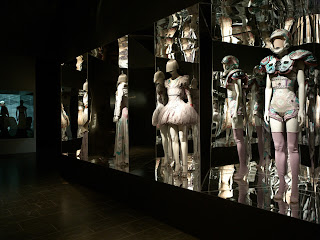 “Alexander McQueen: Savage Beauty” Gallery View, Romantic Exoticism,
The Metropolitan Museum of Art, 2011
Photo: The Photograph Studio, The Metropolitan Museum of Art
The “Romantic Exoticism” space, which held clothes influenced by other cultures, evoked a music box with rotating mannequins in bright mirrored vitrines.  “Romantic Primitivism” gallery, which related to McQueen’s take on the noble savage, used rusty metal enclosures and inspired thoughts of a sunken ship. Enhancing this effect was an overhead film projection of a young model sinking into deep water, her limbs entangled in seaweed-like chiffon. “Romantic Naturalism” room, containing designs derived from nature’s forms and materials, was covered in wall paper based on a blow-up of a McQueen drawing. 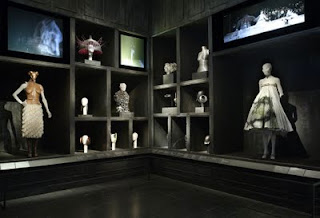 “Alexander McQueen: Savage Beauty” Gallery View, Cabinet of Curiosities,
The Metropolitan Museum of Art, 2011
Photo: The Photograph Studio, The Metropolitan Museum of Art
In the “Cabinet of Curiosities” gallery, meant to emulate 18th and 19th-century collector cabinets filled with a variety of objects, an assortment of wall mounts housed accessories - shoes, headdresses and jewelry. Monitors placed up high presented an on-going loop of past McQueen runway shows. The holographic projection of the model Kate Moss (fall/winter 1996) was seen in a smaller room.

Kate Moss Hologram, from “Alexander McQueen:  Savage Beauty”,
The Metropolitan Museum of Art, 2011
Video source YouTube
Nearby was a variation of the gown Moss wore, a gorgeous garment made up of hundreds of layers of raw-edged silk organza.  People struggled to see the hologram but no one took notice of the actual gown. The final room of the exhibition, covered in acrylic tiles like a clinical lab, held some of the designer’s last creations. 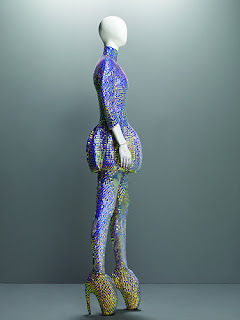 Alexander McQueen (British, 1969–2010),
“Jellyfish” Ensemble, Plato’s Atlantis, spring/summer 2010,
Dress, leggings, and “Armadillo” boots embroidered with iridescent enamel paillettes
Courtesy of Alexander McQueen
Photograph © Sølve Sundsbø / Art + Commerce
I commend Bolton and his team for their inventive display. This was museum experience as spectacular entertainment with the feel of a funhouse or carnival. Although it had much appeal as the attendance figures affirm, an important learning opportunity was missed. There was no probing under the surface of the show. I would have liked to see McQueen’s designs put in a social, cultural or art historical contact with expertise from a costume or textile specialist. This viewer wanted to know more and, in many instances, found it difficult to even find or read the show’s descriptive labels.
I am perfectly aware of the need to rethink the traditional museum exhibition (see ArtWithHillary, The Spectacular Design of The Red and White Quilt Show, April 15, 2011) but this must be accomplished without a loss of meaning and critical thought.
I have similar issues with the museum’s exhibition catalogue. The book juxtaposes McQueen quotes printed in large type with fashion photographs. To find details or references about the clothing, citations and notes, readers must turn to the end pages. This is not an easy task due to the book’s heft, proportions as well as font pattern, typeface size and ink color. Although the catalogue includes a preface by Andrew Bolton explicating the exhibition’s premise and execution, an introductory biographic essay by Susannah Frankel, fashion editor for The Independent and an interview with Sarah Burton by the fashion writer Tim Blanks, it is basically a picture book . This was no scholarly tome.
The fashion photographer Sølve Sundsbø, known for his digital altered prints, was responsible for the imagery. Live models were made to look like inanimate mannequins by painting their skin white, articulating their joints with string, and removing their heads from the final shot. Many photographs had imaginative cropping but this reader could not help but wish for a more straight forward presentation.
Eyebrows have been raised about the cozy relationships between donors and exhibits since the Guggenheim Museum held a Giorgio Armani show in 2000 after a major contribution by the designer. Alexander McQueen supplied the major funding for the Met’s exhibition. Keeping this in mind, such endeavors are still worthwhile if done with good judgement. Since fashion has been recognized as art which warrants major museums’ attention, criteria on par with other curatorial undertakings should be applied. Put dress in the context of history, culture and other disciplines. Look inside, outside and beyond the clothes. Treat fashion as any other artistic masterwork. Meanwhile, the definitive Alexander McQueen exhibit and study has yet to be done. 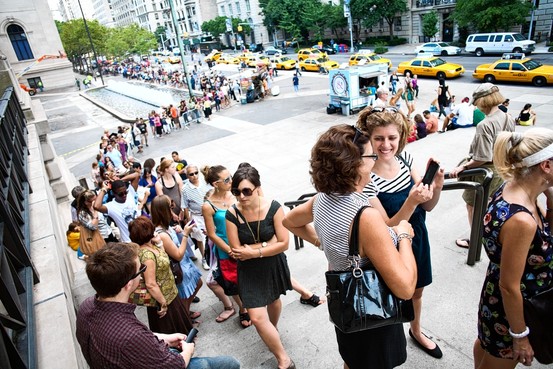 The Metropolitan Museum of Art, Friday, August 5, 2011,
Photo by Ramsay de Give for The Wall Street Journal
Posted by ArtWithHillary at 12:04 PM