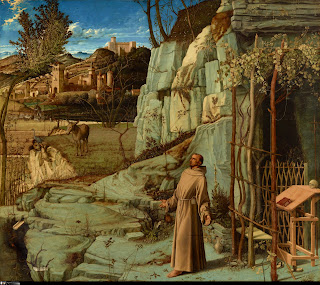 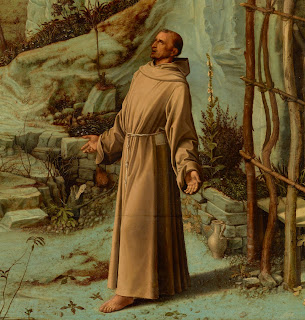 Giovanni Bellini, Detail of St. Francis in the Desert, c. 1480,
oil on poplar panel, 49 x 55 7⁄8 in. (124.5 x 141.9 cm),
The Frick Collection, New York
Photo: Michael Bodycomb
The question of whether the saint had stigmata was long debated. Some people thought the stigmata on his hands were a nineteenth-century addition. The stigma on his foot is not visible to the unaided eye. During The Metropolitan Museum’s study, an infrared reflectogram produced a black-and-white clear image of Bellini’s underdrawing. For the first time, scholars could study the artist’s preparatory composition. It distinctly showed that the stigmata on the saint’s hands and the stigma on his left foot were originally depicted. In addition, residue of red paint on the foot was discerned using high magnification. The paint had worn away but the wound mark had certainly been indicated by the artist.
Bellini choose not to depict St. Francis in the conventional manner. The saint has no side wound. He is marked only on his hands and left foot. Brother Leo, who is typically present, is not there. In fact, the stigmatization seems not to be the most important meaning of the painting. Additional analysis provides further clarification. For now, however, visit the painting. My next post will tell more.
In a New Light: Bellini's St. Francis in the Desert
May 22, 2011, through August 28, 2011
The Frick Collection
1 East 70th Street, Manhattan
Tuesday through Saturday, 10:00 a.m. to 6:00 p.m.
Sundays, 11:00 a.m. to 5:00 p.m.
Closed Mondays and holidays
Posted by ArtWithHillary at 3:38 PM