The Russian Court comes to Amsterdam 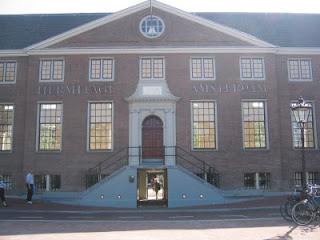 So large a show may seem daunting but consider that what is on loan to Amsterdam represents less than 1 percent of the Russian State Hermitage Museum's 3 million possessions. The Hermitage Amsterdam is one of several “satellite” venues established by the Russian Hermitage to allow the public to see more of its enormous collection. Begun five years ago in a smaller residence, the Amsterdam branch now has a home in a handsomely restored seventeenth-century building, ten times the size of its original space. It is much more than a place for temporary exhibits. Besides the usual museum café, restaurant, gift shops, study center and auditorium, it has conference rooms, an extensive secondary school program and the Hermitage for Children, located in the first Hermitage Amsterdam building, with its own gift shop, school, workshops and classes. In addition, the Hermitage Amsterdam offers a schedule of cultural and educational events that include concerts, opera and films.

The initial exhibition is divided into two themes with one focusing on official court life and the other on royal balls, dinners and amusements. The regal eighteenth-century Romanov throne of Paul I dominates the entrance of the court section’s main gallery. Facing the throne, in a long glass showcase, is a jaw-dropping procession of thirty richly dressed mannequins representing courtiers and royalty. The lighting and placement is such that all details of cloth are discernable. We see clearly that male court attire was just as elaborate as the female’s. Portraits of elaborately adorned tsars and tsarinas line this gallery’s walls. Among them the depictions is a 1795 full length portrait of the Grand Duchess Elizaveta Alexeevna by Marie Louise Elisabeth Vigée-Le Brun. The Grand Duchess is, as expected, gorgeously gowned and jeweled. The informative label discloses that Elizaveta Alexeevna married the Tsar’s son Alexander, who became Tsar Alexander I, in 1801, when she was fourteen and he was fifteen. We also learn that the French painter became a member of the St. Petersburg Academy of Fine Arts after she fled France during the revolution. Nearby smaller rooms tell the story of St. Petersburg, the imperial palace, the six nineteenth-century tsars, courtly activities, protocol and the relationship between the church and state. 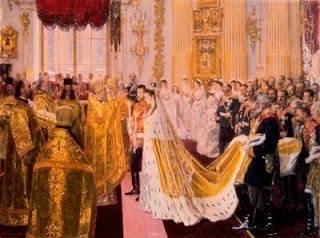 The juxtapositions of works are well done. For example, located in one room is the oil painting, Wedding of Nicholas II and Grand Princess Alexandra Fyodorovna at the Grand Church of the Winterpalace. On an adjacent wall in the same room hangs the actual 1879 icon of Saint-Alexander Nevski, Saint-Titus the miracle worker and Saint-Policarpus the martyr that is depicted in the wedding oil on the church's rear wall. You can look back and forth between the actual icon and its representation in the painting.

Further along are rooms filled with items given to the tsars and tsarinas by foreign and local governments within the Russian Empire. Memorable presents to Tsar Nicholas II are a pair of eighteenth-century Chinese screens of cloisonné, enamel, bronze and gilding, a gift of Chinese Emperor Guangxu and a Russian small, case-enclosed, 1903 Torah presented by the Jewish Community of Libava, Latvia. As if the royals needed more! 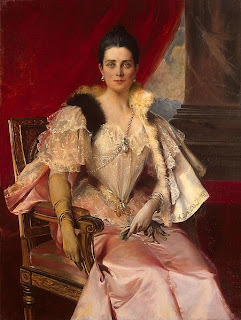 In the large gallery of the exhibit’s ball section, richly embellished gowns fill several centrally placed circular glass cases. About every five minutes, the round cases turn while ballroom dance music is heard. Surprisingly this presentation does not seem frivolous but rather delightful. It elicits smiles. Portraits of the aristocracy hang on the gallery walls overlooking the display cases. Of note is the eye-catching 1894 oil by François Flameng of the super beauty Princess Zinaida Nikolaevna Yusupova whose son murdered Rusputin, the confident of Tsarina Alexandra Fyodorovna, in 1916. Two of the princess’s gowns are on view across from her portrait in the center circular case and her elaborate fan of tortoise shell, gold inlay, brilliants, chrysolite, Brussels lace, and rock crystal is exhibited in one of the adjacent smaller galleries. In nearby rooms, you can see the masquerade costume the princess wore to the court’s 1903 Jubilee Ball as well as her photograph wearing this attire.

Concerning the garments on view in the exhibition, the dresses, gowns and costumes of Tsarina Alexandra Fyodorovna, wife of Tsar Nicolas II are particularly appealing. Her style was obviously tasteful, elegant and understated. Did she pick them out herself or had advisors? I suspect they were her choice.

More to be seen are materials relating to the private side of imperial life. There are such items as personal accessories, playing cards, hunting garments, weapons, theatre programs and, among the children’s toys, the miniature working rifles made for Nicholas II as a child.

The show leaves you with the feeling that you have truly visited the nineteenth-century Russian Court. Although those who made the imperial opulent life possible are left out, we know that revolution is just around the corner and we can see the reason why.

In 2010 and 2011, the Hermitage Amsterdam will present the exhibitions Origins of Modern Art. Matisse and Picasso followed by Alexander the Great. The Road to the East. If the present show is any indicator of the quality of things to come, plan to go.

At the Russian Court, Palace and Protocol in the 19th Century
20 June 2009 through 31 January 2010
Hermitage Amsterdam
Amstel 51, Amsterdam, Netherlands
Open daily from 10 am to 5 pm, Wednesdays to 8 pm.
Closed on January 1st and December 25th
Posted by ArtWithHillary at 12:21 PM