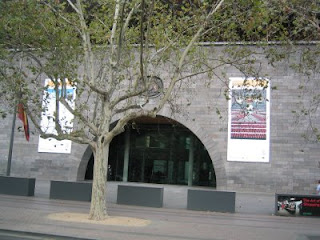 
Visiting a museum for the first time invariably presents a wonderful opportunity for exploration and discovery even to a relatively knowledgeable and experienced museum goer. However, given the unfamiliar terrain, it is important to do some preparation in order to make the best use of one’s limited time and derive the most pleasure from experiences that would create enriching memories.

People in Australia, or as we would call the “Down Under”, have their own terminology where the word “gallery” denotes what we would describe as an art museum. The use of “museum” in Australia is commonly associated with places that preserve and display antiquities and historical artifacts such as a Museum of Natural History. Art works, for example paintings, sculpture, prints, photography, are housed in Australian galleries.

On a recent visit to Australia with my husband, I had the opportunity to spend several hours enjoying the art riches of the National Gallery of Victoria (NGV) in Melbourne, Australia.

I have found it advantageous to start an initial visit to a museum with the Museum's Gift Shop followed by a brief chat with the staff at the Information Desk. The Museum Shop’s display of postcards and publications are good indicators of the gallery’s holdings which the Museum (Gallery) considers important and interesting.

A Museum's Information Desk, in my experience, is generally staffed with people who take pride in the Museum’s collections. They are likely to be very patient and helpful to the visitors in learning about the Museum, its holdings and special exhibits.


There are two parts to the National Gallery of Victoria. These are housed in two separate buildings. The Ian Potter Center: NGV Australia is an excellent repository of Australian art from colonial times to the present and includes both indigenous and non-indigenous artists. The other part, called NGV International, displays international art that includes works from Europe, Asia and America, and covers the entire spectrum from old masters to contemporary painters.

My day began at the NGV International for a personal reason. The Gallery’s collection included a Pierre Bonnard painting, Siesta, that I had seen in New York at The Museum of Modern Art's Bonnard retrospective of 1998. I particularly liked the image and wanted to see again.

The NGV International Information Desk proved helpful as expected. I obtained a map of the Museum and directions to the Bonnard painting. As serendipity would have it, en route to the Bonnard painting, I came across a special exhibition in the Fashion and Textiles Gallery. This is an area that I would not normally visit. However, the exhibit looked appealing. The NGV has an extensive and rare collection of Pierre Cardin’s toiles. I learned that toiles are clothing designs made of inexpensive cotton fabric. These are used as models in the preliminary stages of fashion creation and to ensure that the final garments are manufactured correctly and meet the couture’s exacting standards. The NGV toiles were used by Pierre Cardin in the 1960’s to manufacture clothing for the Australian market. The exhibition compared these construction models to the finished products, which were either actually on view or displayed in fashion photos. The exhibit gave me an insight into the creative process of garment making, transformation and the development of a new aesthetic. 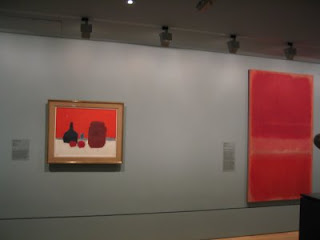 The Bonnard painting was exhibited in the 19th- and mid-20th-century painting and sculpture section. The gallery space was comfortable and well-proportioned for viewing what were primarily small paintings. There was an Amedeo Modigliani male portrait next to a Pablo Picasso Weeping Woman. On another wall, a Bridget Riley op-abstraction in white and grey picked up the tones of the adjacent Amédée Ozenfant still life whose forms and spatial ambiguity related to its Giorgio Morandi neighbor. The objects depicted in the Morandi painting corresponded to those in the Nicholas de Staël still life that followed. The red in the de Staël work matched the hues in neighboring Mark Rothko canvas that in turn connected with a dominant color in a nearby Howard Hodgkin painting. The totality of my observations was stimulating and elicited many thoughts. 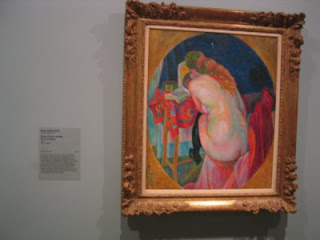 Throughout my NGV International exploration, I was struck by a sense of respectful intelligence that characterized the gallery installations. Works were hung in a way that enhanced the enjoyment of viewing. Paintings complemented one another other. I found myself comparing and finding more to see. Baltus’s Nude with cat, hung next to Robert Delaunay’s Nude woman reading. A luscious, sensual Édouard Manet, The Melon, was near a Chardin-like Antoine Vollon, Eggs on a pan, c. 1885-90. Three lovely 19th-century water scenes by Albert Marquet, Maurice de Vlamick, Felix Vallotton shared another wall creating a refuge of tranquillity.

In another 19th-century painting and sculpture gallery I noticed Briton Rivière’s A Roman Holiday, 1881, hung above St George Hare’s The Victory of Faith. In the Rivière, a dying gladiator makes the sign of the cross in the sand turning the scene into a Christian martyrdom while in the Hare painting, two nude woman, Christian martyrs, lie waiting their sacrifice to the lions. Both works display thinly disguised eroticism. Both painters were new to me.

Works by J. M. W. Turner and John Constable filled another room. I focused on Constable’s specks of white paint that animated his Study of A boat passing a lock. This painting, by the way, was a large study for one of Constable's great paintings depicting the lock near his father’s mill. 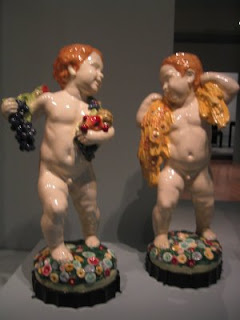 For a change of pace, I visited the 18th- and 19th-century collections of European Decorative Arts. There were examples of Wedgwood pottery, Vienna ceramics and Bohemian earthenware. A pair of figures denoting Autumn and Summer by Hubert Kovarik, reminded me of a Jeff Koons. 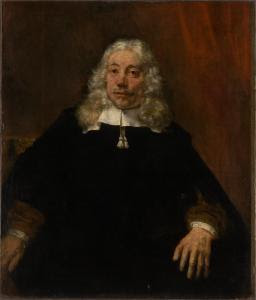 My next sojourn was the Dutch and Flemish masters from the 17th- and 18th-centuries. I looked at two Rembrandts hung side by side: Two old men disputing and Portrait of a white-haired man. This juxtaposition gave viewers the opportunity to contrast a youthful work with one done just two years before the artist’s death. The NGV also has a collection of Rembrandt prints, several of which were on view in the adjoining gallery.

I viewed more 17th- and 18th-century paintings in other galleries. These included a Banquet of Cleopatra, 1743-44, by Giambattista Tieopolo and a show-offy self-portrait by Johann Zoffany, Self-Portrait as David with head of Goliath, which was painted by the artist when he was in his early twenties.

Visually tired, I thought a trip to Asia would revive me. I looked at the collection of Indian art which was not very large. Two 2nd century A.D. Bodhisattvas caught my attention with their sensual depiction of supple flesh. I followed this by a quick viewing of some 15th-and 16th-century European polychromed wood sculptures and a panel painting, c. 1431, St. George Slaying the Dragon, attributed to the Florentine master Paolo Uccello.

My overall impression of the NGV International was quite positive. Although the NGV International had a relatively limited number of objects that may be considered major masterpieces, it nevertheless owned many superior works, some surprises and fine examples of those artists deemed famous. 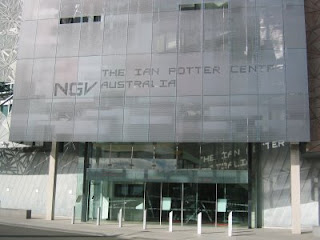 When it comes to art, gallery and museum viewing, I am like an Eveready Energizer Battery advertisement and can keep going. Having fortified myself with freshly brewed Australian coffee, I proceeded to the Ian Potter Center: NGV Australia. Although I know it is not true, I imaged that my so-called fame preceded me. Immediately upon my arrival, I was greeted by a docent in the lobby, who took me on a private tour. It was a bit of a rush but inspiring. Australian indigenous and non-indigenous art is a rich and fascinating adventure. It deserves time and attention and must wait discussion for another time. I don’t recommend doing both parts of the NGV in one day.

Posted by ArtWithHillary at 5:50 AM