What Do You Think? Another Satyr and Satyress 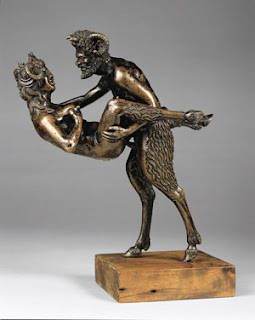 Hopefully, you have seen the exceptional exhibit Andrea Riccio: Renaissance Master of Bronze at The Frick Collection and read about Riccio’s Satyr and Satyress, c. 1510-20, Bronze, Victoria and Albert Museum, London, in my November 19 post. Now view the Satyr and Satyress bronze statuette, attributed to Desiderió da Firenze (Florentine, documented in Padua 1532-45), a follower of Riccio, in The Metropolitan Museum of Art’s special exhibit, Art and Love in Renaissance Italy. This Satyr and Satyress is dated after 1524 (?) and comes from the Musée National de la Renaissance, Château d'Écouen. Actually, the work had been attributed to Riccio when it was taken out of a “reserve” collection in the late 19th century. It is relatively recently ascribed to Desiderió. What do you think?

My thoughts are as follows:
It seems to me the Desiderió piece is more crudely modeled than the work of Riccio I saw at the Frick Collection. It lacks Riccio’s refinement and attention to the crispness of details. Take for instance the hair on the creatures’s lower limbs. On the Satyr and Satyress on view at the Frick Collection, the hair appears lifelike, natural. This is true for the depiction of the Satyress’s hair that falls on her neck. At the Metropolitan Museum, the leg hair of the Satyr and Satyress is more decorative and the hair of the Satyress falling on her neck seems thick, unnatural. There is not much of a feel for the differentiation of texture of her head hair and leg hair. This difference is strongly sensed in the work on view at The Frick. There also seems to be something lacking in the modeling of the chests and backs of the figures at the Metropolitan Museum. The breasts of the Satyress seem to grow out of her armpit, again a bit inexpertly executed compared to the fullness and placement of the breasts on the Satyress at the Frick. Furthermore, the couple at the Metropolitan Museum is explicitly copulating. Judging from Riccio’s narratives and figures at the Frick, I imagine him to be more subtle in his depicture of sexuality and eroticism. As far as I am able to judge, I accept the specialist’s view that the work at the Metropolitan is by a follower of Riccio.

Speaking of “followers" or "in the manner of" or "workshop of”, I suggest you stop at the Metropolitan Museum’s Italian Renaissance Bronze Gallery on the Ground Floor, off the Vélez Blanco Patio. In this marvelous gallery, there is a glass case filled with small bronzes some attributed to Riccio’s workshop or in the manner of the artist. There are also bronzes ascribed to the master himself. Have fun looking.
Posted by ArtWithHillary at 12:16 PM