Andrea Riccio at The Frick Collection

Italian Renaissance bronzes - how can that be of interest to me? Take a chance for some visual joy and intellectual stimulation. Go see the masterly bronzes by the Paduan sculptor Andrea Briosco, (1470-1532), called Riccio for his curly hair, that are on view at The Frick Collection now through January 18, 2009. Riccio created intricate and intimate sculptures, many of which were made for a scholar’s study. His work includes figures, functional and non-functional objects, religious and mythological scenes. The detailed iconography and programs of his elaborate pieces suggests Riccio probably had the advice of Padua’s learned scholars. Padua, as now, was a university town brimming with intellectual activity. is work expresses complex ideas in three-dimensional form. You can easily imagine how his sculptures engendered discussions about philosophical ideas and antiquity.

A little background: Riccio was the son of a goldsmith who gave him his early training. It has been postulated Riccio pursued sculpting in wax and clay instead of following his father’s vocation because of some medical ailment. He studied with the sculptor Bartolomeo Bellano who had assisted Donatello. Donatello had had a studio in Padua and among his major projects created the life-size bronze equestrian statue of the condottiere called “Gattamelata” appearing as a Roman hero in front of the Church of Sant’Antonio as well as large narrative reliefs in bronze on the high altar of the church.

Riccio was also influenced by the work of Mantegna whose classically detailed frescoes, on the walls of the Ovetari Chapel in the Church of the Eremitani, must surely have impressed him.

What we see at the Frick Collection is a large sampling of Riccio’s oeuvre set out in an atmosphere that induces study – like a scholar’s study. The pieces are placed in well-lit glass showcases, many of which allow for viewing on all sides. There are excellent juxtapositions – similar works are exhibited next to one another. There is an orderly pace to the exhibit - just enough work to engage but not too much to become visually exhausted. The exhibit is set in two large rooms separated by an introductory foyer. The foyer contains a bronze relief panel, The Triumph of Humanist Virtue, c. 1516-21, Musée du Louvre, Paris and a life-size painted terracotta of the Virgin and Child, c.1520-21, J. Paul Getty Museum, Los Angeles, which serve to initiate the viewer into the characteristics of Riccio’s work such as engaging narratives, creative approaches to complex ideas, and the classicizing of Christian imagery. In the relief, fame of intellectual achievement insures the scholar’s triumph over death. The Virgin in the Virgin and Child has become a Roman goddess holding an antique robed child.

The Shouting Horseman, c. 1510-15, Victoria and Albert Museum, London, next to Orpheus, after 1510, Musée du Louvre, Paris, greets you as you enter the first large gallery. This gives the viewer ample opportunity to examen Riccio’s rigorous modeling and detail work. The classical costumes, richly decorated and the rippling muscles of the chest and back attest to Riccio’s talent. The horse is poised miraculously on three slender legs while his rider shouts fearsomely. We can think of Donatello’s famous bronze horse who does not dare raise a leg off the ground (one hoof rests on a bronze ball) or small Roman bronzes of Alexander the Great on his rearing mount.

One glass case contains the remarkable lamp from the Frick Collection with others from London, Oxford, and Paris. Three of these are attributed to Riccio and one in the manner of the artist. The fabulously decorated bodies of the Frick’s, Oxford’s and London’s lamps, all attributed to Riccio, balance on elegant sinuous footings. Placed near these lamps and celebrating writing is an intricate bronze vessel from Florence reunited for the first time with its cover from London. There are many gems in this room to ponder. I may just point out, that some of Riccio’s early figures, let’s say before 1516, tend to have rather disproportiately large hands and rubbery arms. When you look close at some of these figures, compare the arms, wrists and hands to the well-developed and well-modeled chests and backs.

In the second large gallery room, the home of the previously discussed Satyr and Satyress, are statuettes and narrative reliefs. The ithyphallic figure identified as a Satyr (Pan)?, c.1520, The Metropolitan Museum of Art, New York, is near a showcase of three Drinking Satyrs ,united for the first time, from Paris, Padua and Vienna. There is much to compare in another vitrine housing four similarly posed seated males, a Pan, a Faun, and two Shepherds from four different collections. Another case holds a Warrior, c.1513-20, Private Collection, United Kingdom and a Strigil Bearer, c.1515-10, The Collection of Mr. and Mrs. J. Tomilson Hill, that are in the identical posture but whose modeling and surfaces are finished quite differently.

You will also see an Entombment, modeled after 1516,Daniel Katz, Ltd., London near the large relief of the Entombment, c.1516-20’s, the National Gallery of Art, Washington, D.C. and the beautifully rendered Saint Martin and the Beggar, 1513-20, Galleria Giorgio Franchetti alla Ca’d’Oro, Venice.

When you think of who was working and producing sculpture in Italy at the time of Riccio or earlier, his work may diminish. There was Andrea del Verrocchio, Desiderio da Settignano, Antonio Rossellini, and the great Michelangelo just to name a few. Yet, Riccio brought much talent and creatively and his legacy is presently on view for you to enjoy.

Note: The National Gallery of Art, Washington, D.C., has a significant collection of Renaissance bronzes including a large group of Riccio plaquettes most of which from the Samuel H. Kress Collection. 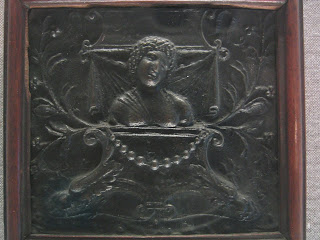 There is also a sample of Riccio’s teacher Bartolomeo Bellano. 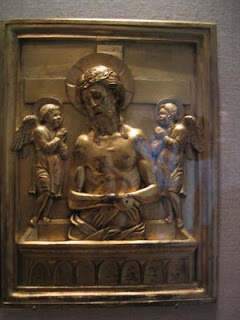 On your next visit to Washington, D.C., treat yourself to some time in the National Gallery of Art West Building, Ground Floor.
Posted by ArtWithHillary at 12:52 PM