Why Leonardo and Rembrandt Still Matter Today Part I 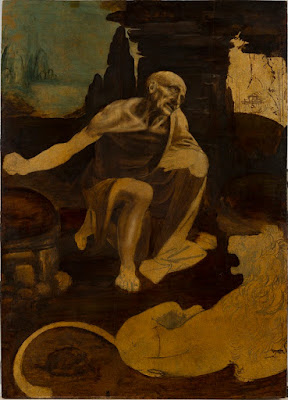 One, Leonardo, was a polymath and genius. He was not only a person who knew about many different subjects but also excelled in them. Painting, sculpture, architecture, anatomy, math, science and botany were just some of his fields of inquiry.  He seemed to have possessed infinite curiosity and inventiveness.

The other, Rembrandt, painter, draughtsman and printmaker, endowed his art with a deep sense of the living, capturing life in all its aspects. He rendered portraits, historical narratives, biblical scenes and landscapes with a preternatural realism. No human emotion escaped his scrutiny nor was not painted, drawn or etched by him. His contemporaries considered him the foremost painter of their time.  He left a body of work that conveys what it means to be a sentient being.

The Metropolitan Museum of Art commemorates Leonardo's quincentenary with the exhibition Leonardo da Vinci's St. Jerome organized by Dr. Carmen C. Bambach, Curator  in the museum's Department of Drawings and Prints. Dr. Bambach is a Leonardo da Vinci specialist whose four-volume publication, Leonardo da Vinci Rediscovered was released in the summer 2019.  The exhibit features the artist's unfinished painting Saint Jerome Praying in the Wilderness lent from the Vatican Museums.  The work represents a penitent Jerome kneeling before a cave-like setting with his right arm outstretched to the outer left edge of the panel.  In his right hand, he holds a stone.  It appears as if he were just about to beat himself in an act of religious discipline in penance.  He looks up toward a crucifix in the panel's upper-right corner - seen in profile is a sketched cross with the Christ figure next to which is a church. The body and tail of the saint's faithful lion take up the work's lower part. A landscape, which is the only part of the painting rendered in color, fills the painting's upper-left corner. 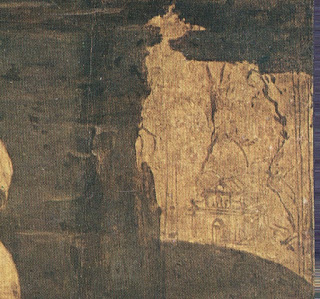 Saint Jerome (347-420) was a fourth-century-early fifth-century priest, cardinal, theologian, historian, scholar, teacher and ascetic who is known for translating the Bible into Latin, the Vulgate Bible still in use today.  His writings included teachings on how to live a moral life with much focus on female devoutness and spiritual manner of living. He worked for Pope Damasus I (ca. 305-384; papacy 366-384) in Rome. He advised and taught a group of educated women on leading a monastic life.  Allegations that he had an improper relationship with one of these women led to the loss of his position. Afterward, he traveled to various holy places, retiring to a cave near Bethlehem to live the remainder of his life.

In a letter to one of his female disciples, Saint Eustochium  (ca. 368-   ca. 419 or 420), Jerome described the tortures and temptations that he endured for Christ while doing penance in the desert.  Some visions aroused in him concupiscence which he countered with fasts and days and nights of beating his chest till his spirit was restored.

As for his loyal lion, legend has it that a lion came to the monastery where Jerome lived.  His brethren ran away when they saw the beast but Jerome called them back to take care of the lion which had a thorn in its paw. Jerome took out the thorn and cured the lion's wound. Thereafter, the lion remained with the saint and is often depicted with him. 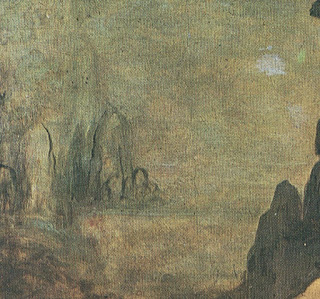 The Saint Jerome is not signed, but scholarly consensus attributes the work to Leonardo.  Detailed investigation of the panel's surface revealed the artist's fingerprints especially recognizable in the painting's upper-right landscape.  Leonardo used his fingers to spread pigments giving the area a hazy effect. At one point, probably in the early nineteenth century, the saint's head was sawn out and removed. Perhaps the owner felt it was more marketable than the incomplete whole. The two parts were found separately and reunited; the perimeter of the rectangular cut is discernible. 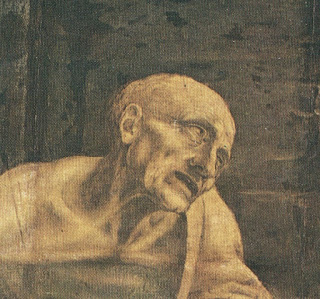 Why or for whom Leonardo painted the work is unknown.  It may have been commissioned as a private devotional image.  The person who ordered the painting may have become frustrated with the artist's notorious lateness in completing projects and cancelled the order.
What is known is that the painting remained with Leonardo who continued to work on it until his death.

The panel is assigned to the painter's mid-career when he moved to Milan from his native Florence.  The picture is painted on walnut, a wood which Leonardo did not use until his Milan stay, previously employing poplar for his paintings' supports.

Leonardo left his estate to his devoted pupil Francesco Melzi (1491-1570) and, it is believed, paintings to his student Andrea Salai (1480-1524). There are, however, no records of either inheriting the Saint Jerome. After Leonardo's death, the painting's history is lost until the mid-eighteenth century when it came into the possession of the Swiss artist Angelica Kauffmann (1741-1807) who was then living in Rome. Its next account follows her death.  Tradition has it that the work was found separately in two parts in two different shops by the French cardinal and diplomat Joseph Fesch (1763-1839), an uncle of Napoleon who had appointed him ambassador to Rome in 1803.  The painting became part of the Vatican Collections in 1856. 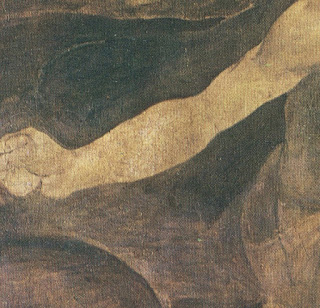 Representations of Saint Jerome usually portray him in his study engaged in theological writings or in the desert kneeling in prayer before a crucifix.  If he holds a stone, it is typically held in his hand which is down at his side or on his chest.  Physical movement is minimal even if the arm holding the stone is raised, it is not outstretched to pack the maximum wallop on his chest.  Leonardo's Saint Jerome in contrast contains motion.  The saint is in the act of a physical action - about to strike his chest - and, an inward emotional exertion as indicated by his beseeching facial expression.

The brilliance of Leonardo's art is the ability to render simultaneously and seamlessly two distinct reactions.  The saint's body conveys the outward act of self-flagellation while his face informs of his inner emotive repentance.  Leonardo couples the means of atonement with mental agony.

Some more points about the panel:  The sketch of the church in the upper-right may relate to church designs that Leonardo was working on or a reference to the monastery near Bethlehem where Jerome had stayed. The proportions of the saint's body reflect the artist's anatomical and proportional investigations.  The saint's head is similar to a head of Saint Jerome made in clay by the painter, sculptor and goldsmith Andrea del Verrocchio (1435-1488) with whom Leonardo apprenticed.  The sculpture is now lost but known through copies and a painting of Saint Jerome by Verrocchio in the Galleria Palatina, Palazzo Pitti, Florence.  The three-dimensionality of Leonardo's St. Jerome figure suggests it was based on the Verrocchio sculptural prototype. The cave setting and upper-left landscape link the work to Leonardo's two versions of The Virgin of the Rocks, one in the Musée du Louvre, Paris; the other in the National Gallery, London. 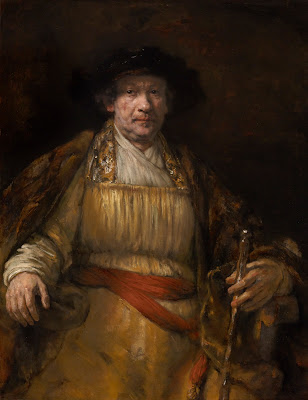 More to come about Rembrandt in the August 2019 ArtWithHillary.

First Fridays:  on the first Friday of the month
(except January and September) the museum is open until 9:00 p.m.
Check The Frick Collection Web site for holiday and limited hours schedule.

Posted by ArtWithHillary at 3:58 PM