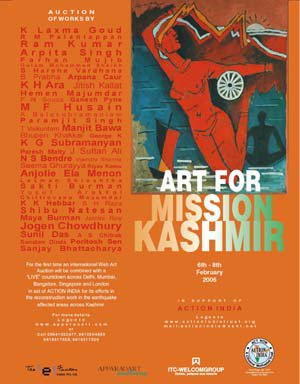 Are religious, cultural and gender identities influencing the art scene? A look at the case of the renowned Indian artist Maqbool Fida Husain (1915 - 2011), known as M.F. Husain, might help put these issues into perspective.  (For more on M.F. Husain, see ArtWithHillary April 2019).

Husain left India in 2006 in self-imposed exile.  His exhibitions had been vandalized, his home and person threatened. Hostility and controversy had followed the artist since the mid-1970s because of  his support and reverence for the then Prime Minister Indira Gandhi. Gandhi had been convicted of election violations before she declared a state of emergency that lasted from 1975 - 1977 and Husain's unwavering admiration for her caused him much condemnation. Things began to heat up in the late 1990s when certain paintings provoked the wrath of the political right. 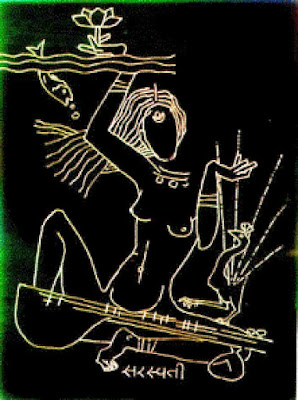 In the 1990s, Husain paintings of Hindu gods and goddesses in the nude began to stir up criticism.  Among the works cited as being obscene were images of the goddess of wisdom, Saraswati; Lakshmi, the goddess of wealth and well-being with the head of Ganesha, god of beginnings and remover of obstacles; the warrior goddess Durga with a tiger; and, a variety of scenes with Hanuman, one of the main characters in the Indian ancient epic the Ramayana, who was known as the Lord of Celibacy and who had perfect control of his senses.  These were works created in the 1970s but denounced some 20 years later. 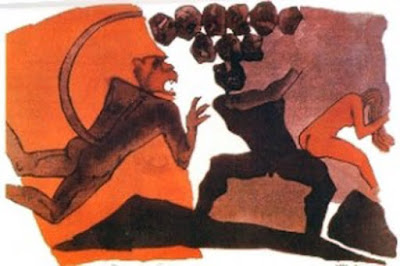 Many of the problematic works that caused hostility were the artist's depictions of scenes and figures from a cycle based on the Ramayana that he began in 1968.  An example is one in which Hanuman is shown confronting Ravana who had kidnapped Rama's wife Sita.  In the Husain depiction, Sita appears seated on Ravana's thigh.  All three figures are nude.

What finally precipitated Husain's exile was the extreme antagonism raised by his painting Bharat Mata (Mother India) which was used in an advertisement for an online art auction organized to benefit victims of the devastating October 2005 earthquake in Kashmir. 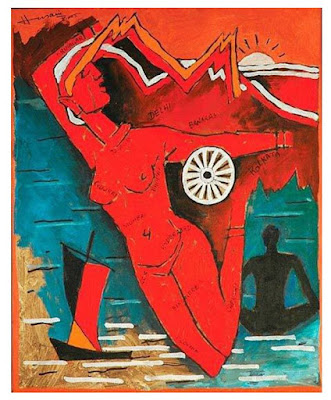 In the painting, an unclothed female is positioned in the shape of a map of India.  Across her body are the names of various Indian states. Her flowing hair becomes the Himalaya's peaks and valleys behind which a sun rises or sets on the horizon.  Overlapping the woman's outstretched left arm is a spoked wheel, a reference to the Ashoka Chakra*, emblem of India and depicted on the nation's flag.  On the water, to the right, a seated figure sits in the lotus pose of meditation.  To the left, a sloop with black, red and orange sails, moves toward the painting's edge.  The orange sail, white horizontal lines on the greenish water may allude to the colors of India's national flag.

What outraged Husain's opponents was the portrayal of Mother India, the traditional personification of the nation as a mother goddess, in the nude.  There were protests against the work by right-wing individuals and groups in various parts of the country. Husain claimed he had never titled the work Bharat Mata (Mother India).  He had sold the painting the year it was made in 2004 to a private collector and, at that time, the work was untitled.  The artist issued an apology as he did not intend to offend and had the painting pulled from the auction.  His 2006 press release concerning the Bharat Mata painting stated, "Whatever I have painted, I have done with complete conviction and in the process if I have hurt anyone's feelings, I apologize."

By the time of this controversy, the political climate of India had drastically changed from the nation's origins.  India and Pakistan were formed in 1947 by the partition of British India.  Although each country was dominated by a religious group, Hindus in India and Muslims in Pakistan, India was established as a secular democracy.  In the heady early period of independence, thoughts of a country united in diversity held sway.  Many non-Hindus chose to remain in the new nation as did Husain who was a Muslim.  The artist always believed in nonreligious nationalism, a form of citizenship that transcends religions.  He said, "I paint not as a Muslim but as an Indian."  The Hindu myths and religion were, for him, his own heritage.

India's constitution emphasizes equality of all, embracing Western values.  For some 40 years, the nation was ruled by the secular Congress Party but gradually Hindu nationalism grew as right-wing Hindus pushed for an increasingly Hindu dominated state.  This, of course, has culminated in the recent re-election of Prime Minister Narendra Modi who is committed to giving Hindus, the religious majority, more power.  Thus, as a Muslim whose paintings often portray Hindu myths, gods, goddesses and other beings, Husain became a target for Hindu nationalists.  He was described as "...a Muslim trespassing on Hindu symbolic ground."  Critics claimed his religious identity restricted his access to Hindu iconography and it was a sacrilege for Husain to borrow subjects from Hindu epics and depict goddesses in the nude.  The artist's fame and fortune may have contributed to his censure.

India's long history - both literary and artistic - encompasses many manifestations of the divine and semi-divine in nude or half-clothed states.  Gestures and postures of a sexual nature are common.  Female and male sculptures and temple decorations often are rendered with explicit delineation of the sexes.  In paintings and sculptures one finds clear representations of the nude form which, in the case of women, include the rima vulvae.  Ancient texts, such as the Kama Sutra, which is based on love coupled with moral responsibility, reflect the Hindu belief in fulfillment of the senses as one of the four main goals in life. The imagery of what in the West may be called erotic and sexual permeates Hindu iconography and tradition.  Such was Husain's milieu.  He absorbed Indian culture and conventions and took from it for his work. Husain said, "You cannot reinvent the wheel - your individuality, your creative eye lies in what you pick."

The Bharat Mata (Mother India) painting elicited 5 criminal lawsuits filed in various parts of India against the artist.  The Supreme Court of India consolidated and transferred the suits and legal proceedings to the trial court of New Delhi in December 2006.  The complaints involved punishable violations of 4 sections of the Indian Penal Code which concerned distribution of obscene materials, obscene acts, expressions that intend to hurt religious sentiments and defamation of the national emblems or names.  The latter was a reference to the painting's inclusion of an Ashoka Chatra.

The Delhi High Court completely exonerated the artist from all legal accusations in 2008.  In the decision, the Court remarked, "It is very unfortunate that works of any artist today who have tried to play around with nudity have come under scrutiny....Criminal justice system should not be used as an easy recourse to ventilate against a creative act." As for the work scandalizing the public, the judges ironically asked if the complainants were not scandalized "...by the large number of photographs of erotic sculptures which are in circulation....None gets scandalized looking at sculptures."  Painting, they stated, "...is an art like sculptures."  In the decision, the Court emphasized values of liberty, equality and fraternity requiring tolerance of other views.  With respect to the Ashoka Chatra, the Court concluded its placement in the painting did not show disrespect.  The Court upheld the right to free speech and freedom of expression.

Husain never returned to India.  Although the courts ruled in his favor, adversaries continued to work against him.  In 2015, on the occasion of the artist's 100 birth anniversary, a right-wing Hindu group tried to stop the exhibition, “Husain at Hundred,” September 17 - October 24, 2015, at the Aicon Gallery in New York City.  Even after his death, hostilities continue. 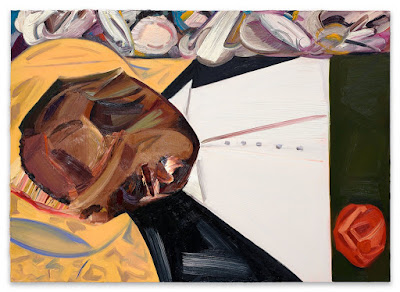 The Husain controversy had echoes in the 2017 protest of a painting that was shown in the Whitney Museum of American Art's 2017 Biennial.  The work in question was Open Casket, an oil on canvas by the white, American artist Dana Schutz (1976 -).  The painting depicted Emmett Till's maimed body in his casket and was based on a photograph of Till that was widely circulated at the time of his funeral.

Till was a 14-year-old Chicagoan African-American who had been visiting his great-uncle in Money, Mississippi in August of 1955.  He and some boys went to a grocery store to buy candy.  The owners were a white couple.  The wife was 21 years old and was alone in the store. There are various versions of what happened but after the boys left, she accused Till of flirting with her which, in the South for a black male, had severe consequences.  When the husband found out what was purported to have taken place, he and his half-brother set out to find Till.  They kidnapped him, pistol-whipped and shot him, then weighted his body and threw him into a river. Till was found.  His mutilated face was unrecognizable.

Till's body was returned to Chicago.  His mother insisted upon an open-casket funeral because she said, "There was just no way I could describe what was in that box. No way. And I just wanted the world to see."  Till's racially motivated murder attracted national attention.  The story and Till's photograph was featured in newspapers all over the world and aroused discussions about racial relations, segregation, law enforcement and more. Thousands attended his funeral.  The woman accuser subsequently rescinded her statements saying she had lied about Till's advances and had given false testimony. 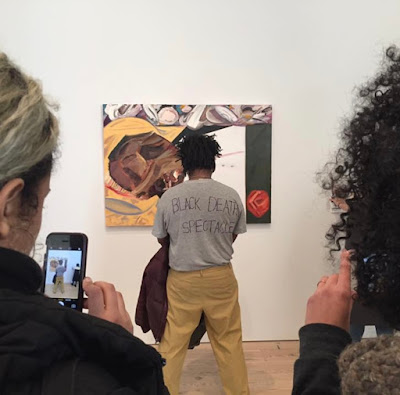 The Schutz painting of Emmett Till in his coffin caused an uproar among some of the black community who felt a white woman had no business taking on the subject matter belonging to them.  At the Whitney Biennial, Parker Bright (c.1993 - ), a black artist, stood in front of the painting for 2 days wearing a T-shirt with the words "Black Death Spectacle."  The black artist and writer Hannah Black (1981 - ) wrote in an open letter to the Whitney that it "...was not appropriate for a White artist to transmute Black suffering....The subject matter is not Schutz’s; white free speech and white creative freedom have been founded on the constraint of others, and are not natural rights.” She along with others called for the painting to be destroyed.  Parker and his supporters wanted it removed from the Whitney Biennial.

Schutz said she was motivated to paint the subject by her feelings as a mother.  She couldn't fathom the idea of a child being murdered like this and could not imagine what Till's mother went through.  The artist put out a statement in which she said, "I don't know what it is like to be black in America, but I do know what it is like to be a mother....The thought of anything happening to your child is beyond comprehension." The Whitney curators did not remove the painting.

The Schutz painting and Husain's work has a chilling effect on those who value the free exchange of ideas.  Questions arise.  Are certain subjects owned by certain groups? Can someone who is not Jewish comment on the Holocaust?  Can Christian painters be the only artists entitled to paint Christian themes?  In an interview, Bright was asked if he thought there was a way that a white artist could recreate the image of Emmett Till that he would accept?  He answered no.

*The Ashoka Chakra is the 24 spoked wheel that appeared on many edicts issued by the Maurya Dynasty emperor Ashoka who reigned from c. 268 to 232 BC and advanced the spread of Buddhism throughout India.
Posted by ArtWithHillary at 1:36 PM