Franz Gertsch: The Virtuosity Of A Swiss Painter 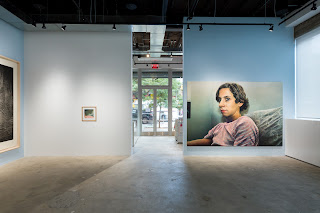 It is rare when a gallery show entices prolonged viewing - a desire to sit and look and think about what attracts.  The exhibition Franz Gertsch: Polygonal Allover at the Swiss Institute in the East Village does just that in an overview of the Swiss artist's decades of virtuoso works in painting and woodcut.

Franz Gertsch (1930 - ) focuses on portraiture that is a modern take on art historical sources, specifically the Baroque portrait tradition and old master techniques. In the 1970s Gertsch made huge portraits of young friends who were living together in Lucerne, Switzerland.  These youths included the now admired artists Luciano Castelli (1951 - ) and Urs Lüthi (1947 -). 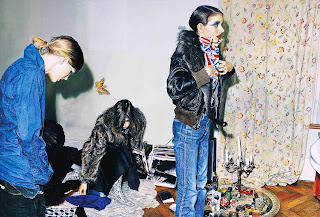 The painting At Luciano's House, 1973, captures three friends in preparation for going out. The young lady on the right, Marina, Luciano's girlfriend at the time, is looking off to the right apparently regarding herself in a mirror located outside of the picture space.  She adjusts her fur-trimmed jacket under which she wears a blouse patterned in the red, white and blue "stars and stripes" of the American flag.  This was a period of strong American influence on Swiss youth. The blond on the left, Barbara, who was an art student in Lucerne, seems to be tucking her top into her pants.  The kneeling center figure, Luciano, picks up some type of garment lying on what appears to be an odd-shapped shag rug popular in the 1960s and 1970s and associated with a bohemian lifestyle. 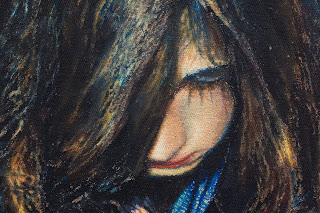 The outcome of all the preening is the self they would present to the outside world.  There is an androgynous quality to these young people who work their way into trying to find their identity and what they would like to become.  Scattered like debris on the wooden floor are such items as records including a recently released Rolling Stone album, a book, knickknacks and ornaments which give hints to their interests and lifestyle.

Gertsch painted a butterfly with distinctive markings on the far wall which seems to make an analogy between its vibrant coloration and the youth's decorative dress. 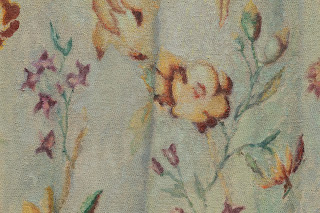 The painting's saturated colors are intense and the details prominent. Passages such as Luciano's hair and the pattern of the curtains highlight the artist's ability in the rendering of different textures and forms.

Gertsch achieves all this by employing an unusual technique. He takes photographs of his subjects with a flash and projects the image onto an unprimed canvas.  He paints in the dark relying on his color memory. The method is not too different from the way the camera obscura was used as a painting aide by artists such as the Dutch Johannes Vermeer (1632 - 1675).  Gertsch's methodology, like the camera obscura, made visible optical phenomena which couldn't be seen with the naked eye, particularly specs of brightness on objects, multiple-viewpoints and the blurring effects captured by mechanical means.  The raking light produced by the flash illuminates everything equally and brings to the fore the surface of things. 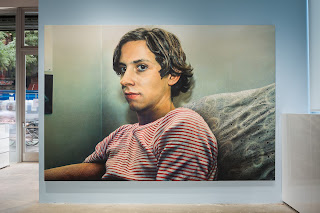 Gertsch has been called a photorealist referring to the photorealism art movement in vogue in the 1960s and early 1970s in the USA. Photorealists took everyday reality as their subjects and developed a style based on photographic images.  They made their art look like a photograph often working with an airbrush instead of a paint brush to eliminate any suggestion of brushstrokes.  Viewers may confuse a photorealistically painted work with a photo.  With Gertsch's art, this confusion does not occur.  He never lets the viewers forget his paintings are paintings. 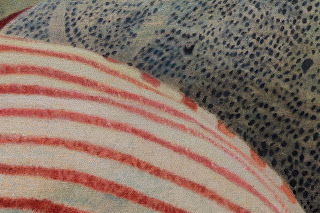 Gertsch painted some thirteen portraits of Luciano attracted no doubt to his beauty, way of life and play on gender fluidity.  A detail of the large portrait Luciano II, 1976, reveals how the paint seeps into the unprimed cotton canvas and the way irregular lines and dabs of paint make obvious the artist's touch. 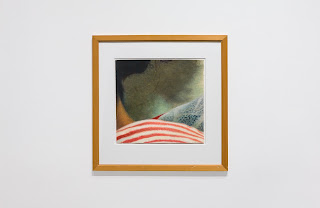 That Gertsch was interested in the means of visualization as opposed to exact replication of reality is communicated in Luciano's Leibchen, 1977, a fragment of a version of the Luciano II portrait. Unsatisfied with this earlier Luciano likeness, he cut up the canvas but retained four parts of the young man's striped shirt.  Framed, the fragment became a study in abstraction formed in part by the shirt, a bit of neck, hair, chair and wall. 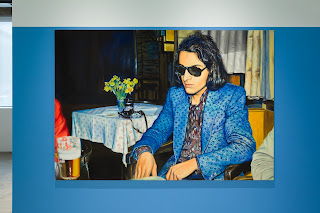 The paintings Portrait of Urs Lüthi, 1970, and Luciano I, 1976, are other monumental canvases in the show.  Lüthi works in many media including photography illustrated by his camera set on a table in Gertsch's portrait. 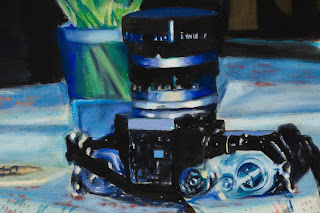 The camera, the half-filled glass of beer and the sitter's dark glasses are a tour-de-force of reflections. 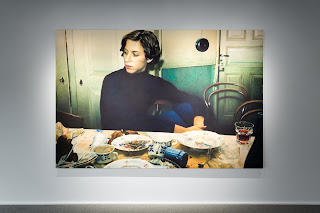 Luciano I depicts the end of a dinner party.  The remnants of a meal are on the table.  The many cigarette butts left in a dish used as an ashtray suggest a long repast. 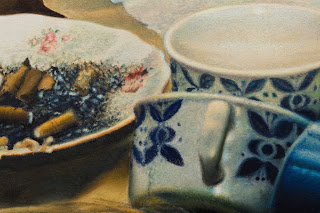 The table is in disarray:  dirty dishes are piled up, broken glass remains and cups lie on their sides.  The tablecloth is covered with stains of spilled food and drink as well as paint marks indicative of the youth's vocation. 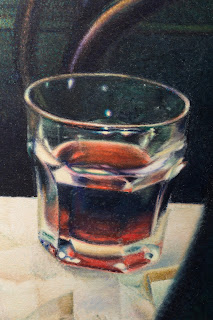 Objects and areas of note include a partially filled wine glass which rests precariously at the table's right edge, the broken glass and the room's walls and doors along with their hardware.  The triangular shaped space formed by Luciano's arms and knees through which is seen part of his chair's wooden top rail, some wallpaper and a small slice of the door, echoes the painting's compositional structure.

The work's indebtedness to the moralizing domestic scenes of 17th-century Dutch genre paintings does not take away from the appreciation and pleasures of Gertsch's work. 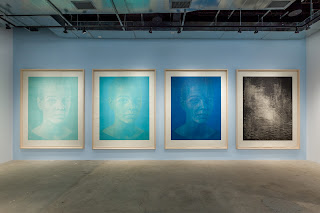 Between 1986 and 1995 Gertsch stopped painting and worked exclusively in the print medium.  The show includes three large-sized woodcuts from the series he made of a young woman, Natascha IV, 1988. These prints sought to create realistic representation using a limited number of colors.  Here he utilized Japanese blue ink.  The woman's three-quarter view with an ear pierced by a small hoop earring is reminiscent of Vermeer's Girl with a Pearl Earring, Mauritshuis, The Hague.

The Natascha IV prints are installed next to Schwarzwasser, 1991, a woodcut study of a water surface where enlarged details become a form of landscape.  By pairing the particulars of a face with the particulars of nature as is the artist's practice, Gertsch points to the relationship between the two.  Both are the uppermost layer of something and a part of a larger whole.  Both are part of the natural world. 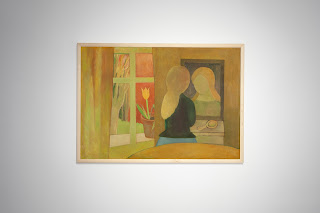 Early paintings, drawings and woodcut prints demonstrate the artist's enduring consideration of the mirror as a means of identity perception. You can see these in the small gallery at the back of the first floor.  I suggest you begin your viewing here.

A word about the Swiss Institute: The Swiss Institute is an independent, non-profit  art institution founded in 1986 by a group of Swiss living in the United States.  It showcases artists from all over the world who work in a variety of media.  The Institute's current home, its fifth, opened in June 2018.  Designed by Selldorf Architects, the 7,500 square foot space covers four floors including a basement and roof garden.  Printed Matters/St. Marks, a satellite of Printed Matters, the bookstore dedicated to artist' books and related publications, is located in the lobby.

Posted by ArtWithHillary at 4:03 PM