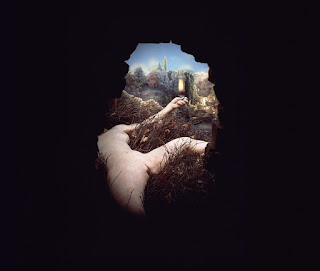 If the question is posed "Which artist has had the most influence on twentieth and twenty-first century art?" the answer would very likely be Marcel Duchamp (1887 - 1968).  This French-American was not only a sculptor, painter, theorist, and art dealer/collector but also a writer and chess player.  His work led to and/or influenced conceptualism, installation, performance, appropriation and kinetic art.  His innovative readymades and gender identity/fluidity, language and text art resonates in today's art world. 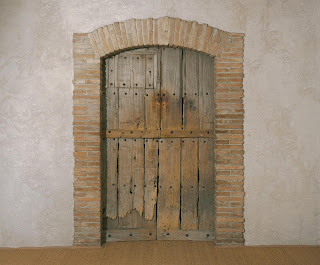 By the early 1920s, Duchamp appeared to have given up being an active artist.  He seemingly devoted himself entirely to chess.  Secretly, however, he was working on his magnum opus, Étant donnés, an approximately 8 feet long complex diorama viewed through two hardly perceptible peepholes cut into a barn door. The construction would occupy him for over twenty years.  It was his last artwork.  At his death Duchamp left a detailed manual plotting the work's dismantling and reassembling.  In 1969 it was installed in the Philadelphia Museum of Art where it remains on permanent exhibition.

Étant donnés provides viewers with an extremely strange and compelling vision.  A supine nude, legs splayed, lies on a ground of twigs in a rural landscape that includes a waterfall.  She holds up a lit gas lamp although the scene takes place in bright light, on a sunny day. The view through two holes enhances the eyes' normal stereoscopic vision and makes the tableau uncannily three-dimensional.  Its meaning has been the subject of much discourse.  No definitive interpretation has yet to be established.   Now Serkan Özkaya, a Turkish artist living and working in New York, has come up with an answer. 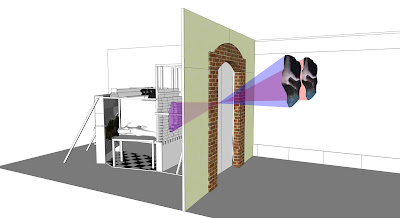 Özkaya postulates that Duchamp's work conceals the artist's self-portrait which is seen when the construction is transformed into a camera obscura. Duchamp then appears as his feminine alter ego, Rrose Sélavy.  The name was a pun.  When pronounced in french, Rrose Sélavy sounds like the saying "Eros, c’est la vie" that is to say in English "Eros, that's life." 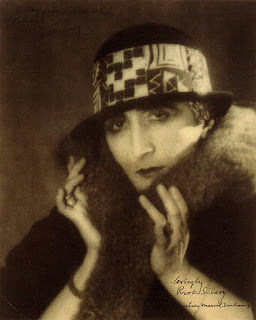 Özkaya built a full-scale model of État donnés to illustrate his theory. He first set it up in Duchamp's old studio at 80 East 11th Street, room 403, New York City.  Özkaya worked three years on the project. He enlarged the size of the peepholes to create a bigger projected image. 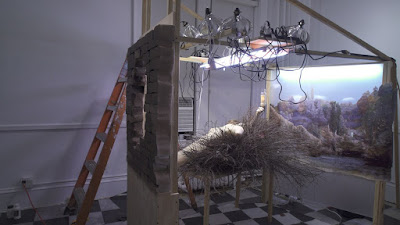 The camera obscura was the darkened studio room.  Light from the installation passed through the two apertures projecting on the opposite wall an upside-down and reversed image of the interior tableau.  For two weeks in October 2017, the work could be seen at the old studio room only by appointment. 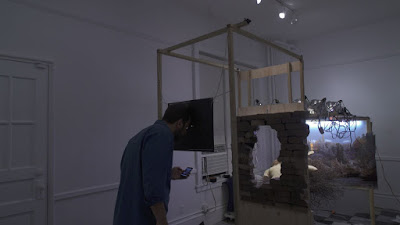 On October 21 the  reconstruction went on public view at the Postmasters Gallery where it was supplemented by additional pieces related to Özkaya's theory on Duchamp.  The exhibit is entitled We Will Wait which may be a word play on the pronunciation of  Étant donnés.  "Waiting" in french is "En attendant." 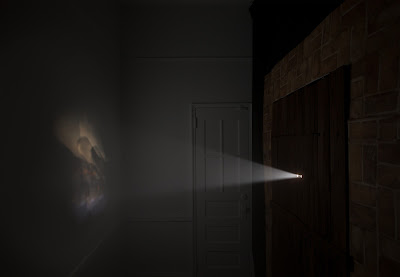 We Will Wait. Photo illustration by Brett Beyer and Lal Bahcecioglu. 2017.
Photograph:  Courtesy of Serkan Özkaya and Postmasters Gallery

Özkaya is an artist concerned with issues of appropriation, calling attention to the meaning of originals and copies.  Other works in the show illustrate these questions and leave viewers much to ponder.  His replications of the photographer Denise Browne Hare's two prints of the Duchamp's closed and open studio door, #403 (exterior) and #403 (interior) are a case in point.  The photos of Hare and Özkaya are framed side by side.  Hare's door, photographed at more innocent times, lacks the extra security lock above the entry doorknob and the viewer peephole that are captured in Özkaya's shots.

This viewer saw the room-size installation at both the Duchamp studio and gallery venues.  I could not make out Duchamp's portrait but picked out what appeared to be eyes.  Whether this vision was deliberate or by chance I don't know.  No matter, portrait or no portrait, the exhibition and premise is intriguing.  The show merits attention.  What you see is up to you.  C'est la vie.

Posted by ArtWithHillary at 4:29 PM