Paint Into Words and Words Into Paint: 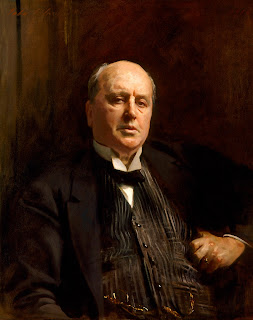 Portraits may tell us much about the person portrayed.  They are a collaboration of the artist/depicter and the sitter as well as  the viewer. They all bring their own sensitivities to the undertaking.  Success results in an understanding of the subject by the observer.  It is not an easy task.  The writer, Henry James (1843 - 1916) went so far as to claim, "There is no greater work of art than a great portrait," when writing about his friend, the painter John Singer Sargent (1856 - 1925). James used the word portrait in the title of three of his works.

These musings and more came to me on a visit to the Morgan Library & Museum's exhibition, Henry James and American Painting.  The exhibit focuses on James's intense attraction and response to the visual arts as well as his close friendships with artists.  While still at Harvard, he had tried his hand at painting under the encouragement of the American multi-talented artist, John La Farge (1835 - 1910).    James's talents rested in other areas but the experience gave him a particular insight into the painterly art form.  He saw the close ties between the art of the novelist and the art of the painter.  James wrote in his 1884 work The Art of Fiction, "The analogy between the art of the painter and the art of the novelist is, so far as I am able to see, complete."

A highlight of the Morgan exhibit is James's relationship with Sargent. Although the writer was the painter's senior by thirteen years, the two had a great deal in common. Both were Americans who spent much time in Europe during their childhood (Sargent was born in Florence, Italy);  both were equally comfortable in England and on the continent; both were bachelors who enjoyed the company of fashionable women; and, both set down in their  specific mediums the goings and comings of  contemporary society.  They met in Paris in 1884, became good friends and remained so for more than thirty years.  They produced art which was intensely descriptive yet insightful.

In 1913, James's friends commissioned Sargent to paint the novelist's portrait on the occasion of his seventieth birthday.  Sargent who at the time had not painted portraits for some three or four years, was a bit concerned about the outcome.  His worry was unwarranted.  After about 10 sittings, James commented to his brother "...It is, I infer, a very great success....it seems likely to be one of S's very fine things."  He would go on to write about the finished work, "Sargent at his very best....in short a living breathing likeness and a masterpiece of painting."

The oil is an astute portrayal of the writer.  James's large, bald head beams intelligence.  His expression conveys the sensation of someone deep in thought.  Perhaps he is considering the social scene and his next novel.  His posture has an informal quality.  He is seated at an angle.  His right arm is bent about the chair's back.  His left thumb looped in his vest's left armhole.  His posture conveys an ease of sociability.

The portrait does what portraits should do.  It imparts to the viewer information about the sitter which results in the perception of  knowing the person portrayed.  The sensation of familiarity can be enhanced in double portraits, particularly representations of husbands and wives. In such cases, viewers not only learn about the individuals but also gain a glimpse into the relationships of those represented.  Thus, another aspect of a sitter's personality is disclosed. 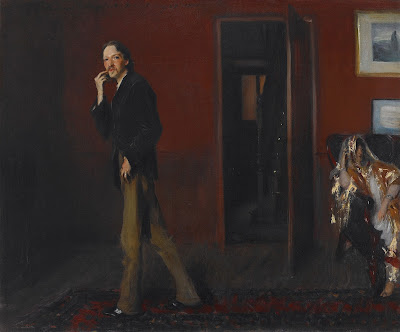 Sargent's portrait of Robert Louis Stevenson (1850 - 1894) and his wife, Fanny Vandergrift Osbourne Stevenson (1840 - 1914), also in the Morgan exhibit, is an excellent example of the double portrait phenomenon.  The work was painted in 1885 and shows the couple in their home, Skerryvore, in Bournemouth, England. Bournemouth is a seaside town on the south coast off the English Channel.   Henry James was there too.  Why Bournemouth?

To learn the answer and more, read next month's ArtWithHillary. Meanwhile, please go see the show at the Morgan.

Posted by ArtWithHillary at 4:04 PM