Guido Who? Part I

Cagnacci - The Other Side of Baroque 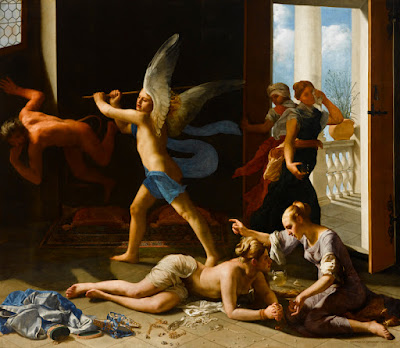 Guido who?  Guido Cagnacci (1601 - 1663) that's who.  This seventeenth-century Italian painter fell into obscurity soon after his death in 1663. He was only rediscovered in the 1950s when Italian art historians were looking into Italy's artistic heritage.  Studies explored provincial areas, regions of small towns like Romagna where Cagnacci was born in 1601.  The artist is still relatively unknown outside of Italy but this should change.  On view at The Frick Collection is Cagnacci’s "Repentant Magdalene”: An Italian Baroque Masterpiece from the Norton Simon Museum.*  This complex painting is considered Cagnacci's master work and offers an excellent introduction into this somewhat bizarre painter's life and artistic achievements. Fortunately for visitors, the Repentant Magdalene was lent without a protective glass covering.


Little is known about Cagnacci and what is known comes primarily from criminal and notary records.  In his teens, his father, a town crier and prosperous furrier merchant, sent him to Bologna where he was exposed to the period's most important painters.  There he very likely trained in the studio of Ludovico Carracci, probably untill Carracci's death in 1619. The artists Guido Reni and Guercino, also in Bologna, impacted his development. He accompanied the latter to Rome in 1621 where he came in contact with the Caravaggisti, painters who followed the style of Caravaggio. By the mid-1620s Cagnacci was back in his native region where he lived a peripatetic existence producing devotional works for churches convents and confraternities.

Without doubt, Cagnacci was strange.  In 1628 he attempted to elope with a rich, aristocratic widow. Her family and Cagnacci's father ended the affair. Four years later, although the widow remarried someone else, Cagnacci petitioned for her dowry.  This failed but another account of 1636 relates that a different woman gave him all of her money, asking little for herself to live on.  No reason was given.  Oddly, the artist had the reputation of always going about accompanied by a beautiful young woman dressed as a man.  The women were likely his models/lovers and their disguise undertaken to hide illicit living arrangements.  At this time, it was illegal for a man to live with a woman without being lawfully married.  He had a strained relationship with his father whose will left everything equally to Cagnacci and his two sisters but meticulously subtracted from his son's share all the monies he had spent on him.

In the 1650s Cagnacci was in Venice where he stayed for about ten years.  He studied the works of Titian, Veronese and Tintoretto. Inexplicably, he changed his name to Guido Baldo Canlassi da Bologna. Nevertheless, he continued to sign his paintings Guido Cagnacci.  By this time, he developed a career catering to collectors's amatory tastes. His specialty was easel-size, half-length, semi-nude women.  Attributes identified them as religious or historical figures - an asp for a Cleopatra, a knife for a Lucretia, an ointment jar for a Magdalene. Thus, the unclad maidens were given respectability.  What the patrons really wanted, however, was clear. 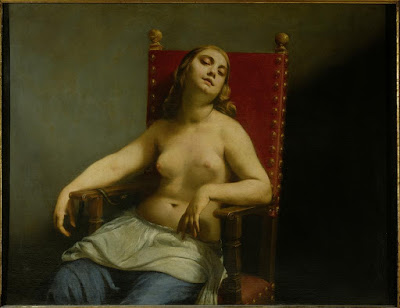 Cagnacci's pictures were sexy and sensuous, painted in a manner that may be described as idealistic realism.  Their commercial marketability is evidenced by the replicas and copies in extant probably made by Cagnacci's assistants as well as other artists. Cagnacci himself made several versions of some works -  sometimes five or six. 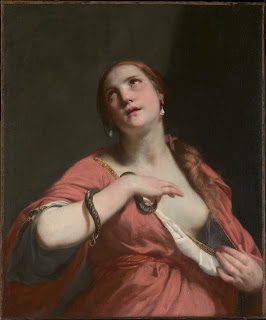 
The artist's imagery brings up another side of the Baroque that was antithetical to the Papacy's powerful, grandiose art.  As a response to Counter-Reformation objectives, Papal art sought to entice the devoted away from Protestantism through monumental works glorifying Catholic theology.  Church art with any hint of kindling carnal desires was forbidden.  Yet artists, especially in Rome, were catering to a clientele entertained by disallowed art.  These painters banded together for drinking, brawls and debauchery and based their work on first hand experience.  They depicted the seamy side of life - drinkers, prostitutes, transvestites, beggars, witchcraft, tavern scenes, vices, pleasures and passions.  Physical love was expressed - whether the love object was male or female.

This important but previously ignored aspect of the Baroque was the focus of the noteworthy exhibition, The Baroque Underworld:  Vice and Destitution in Rome that took place at the French Academy in Rome - Villa Medici, Rome, in 2014 and, later, with additional loans, at the Petit Palais, Paris, in 2015. The guide to the Petit Palais exhibition can be downloaded from TextLab.  This was the first exhibit dedicated to "underworld" subject matter.  Currently, two shows, Valentin de Boulogne Beyond Caravaggio at the Metropolitan Museum of Art, New York, and Beyond Caravaggio, at the National Gallery of Art, London, shed further light on this other Baroque.

How Cagnacci came to paint his masterpiece and the painting's iconography - symbolism and allusions - is the subject of the next blog post.  Look for it.

First Fridays:
On the first Friday evening of the month (except January),
the museum is open until 9 p.m.

Posted by ArtWithHillary at 4:04 PM