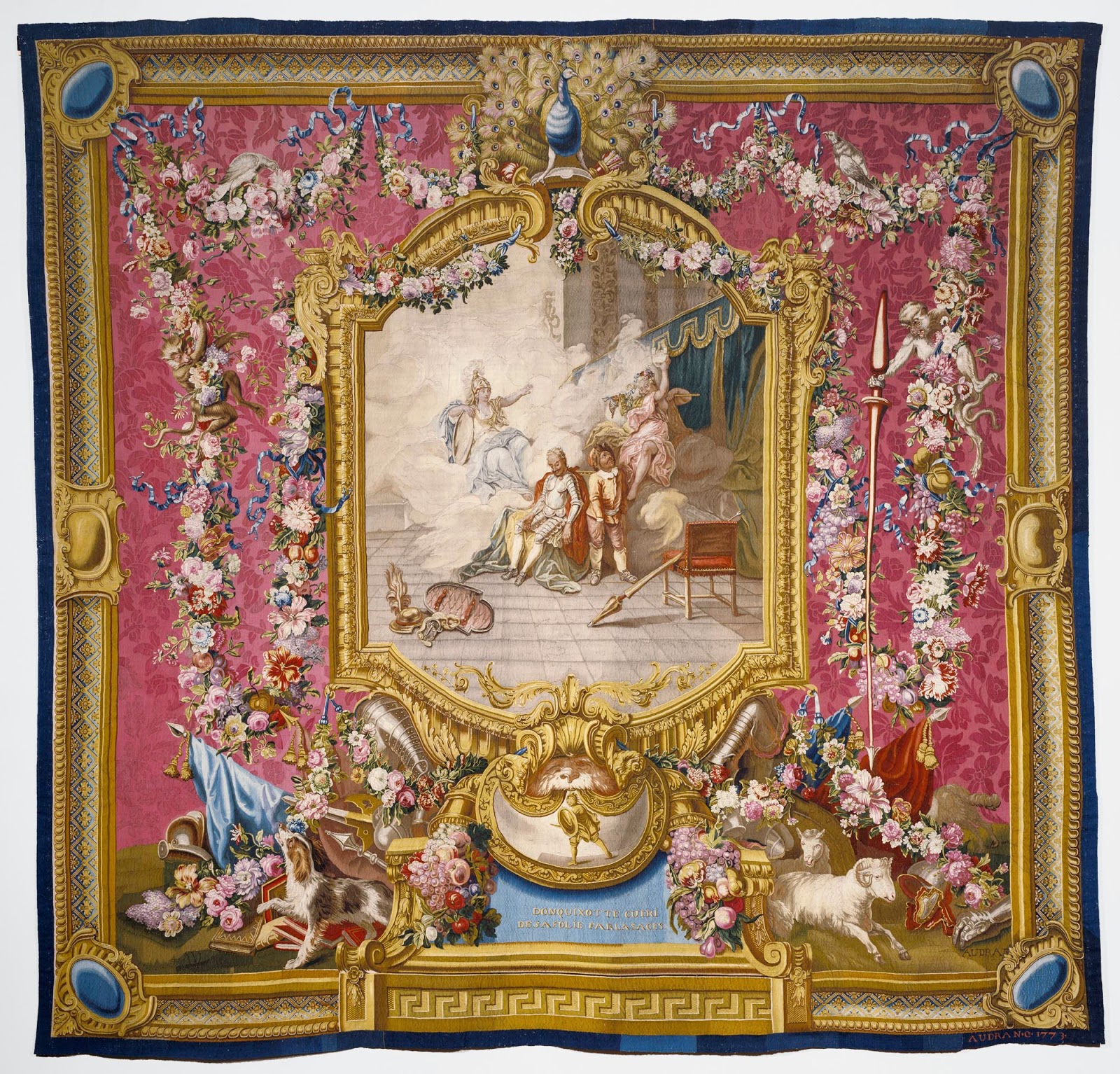 Want to feel regal?  Step into the Frick Collection's Oval Gallery where three wall-size tapestries are beautifully installed.  Products of the Gobelins Royal Manufactory, makers of the French king's furnishings, these colorful artworks along with paintings, prints, books and two other tapestries made in Brussels are part of the exhibition Coypel's Don Quixote Tapestries: Illustrating a Spanish Novel in Eighteenth-Century France.

The story of these sumptuous hangings begins in 1714 when the artist Charles Coypel was asked to create scenes for a Gobelins tapestry series based on seventeenth-century Cervantes's Spanish novel Don Quixote. The book had been an immediate success quickly becoming popular throughout Europe, particularly in France. 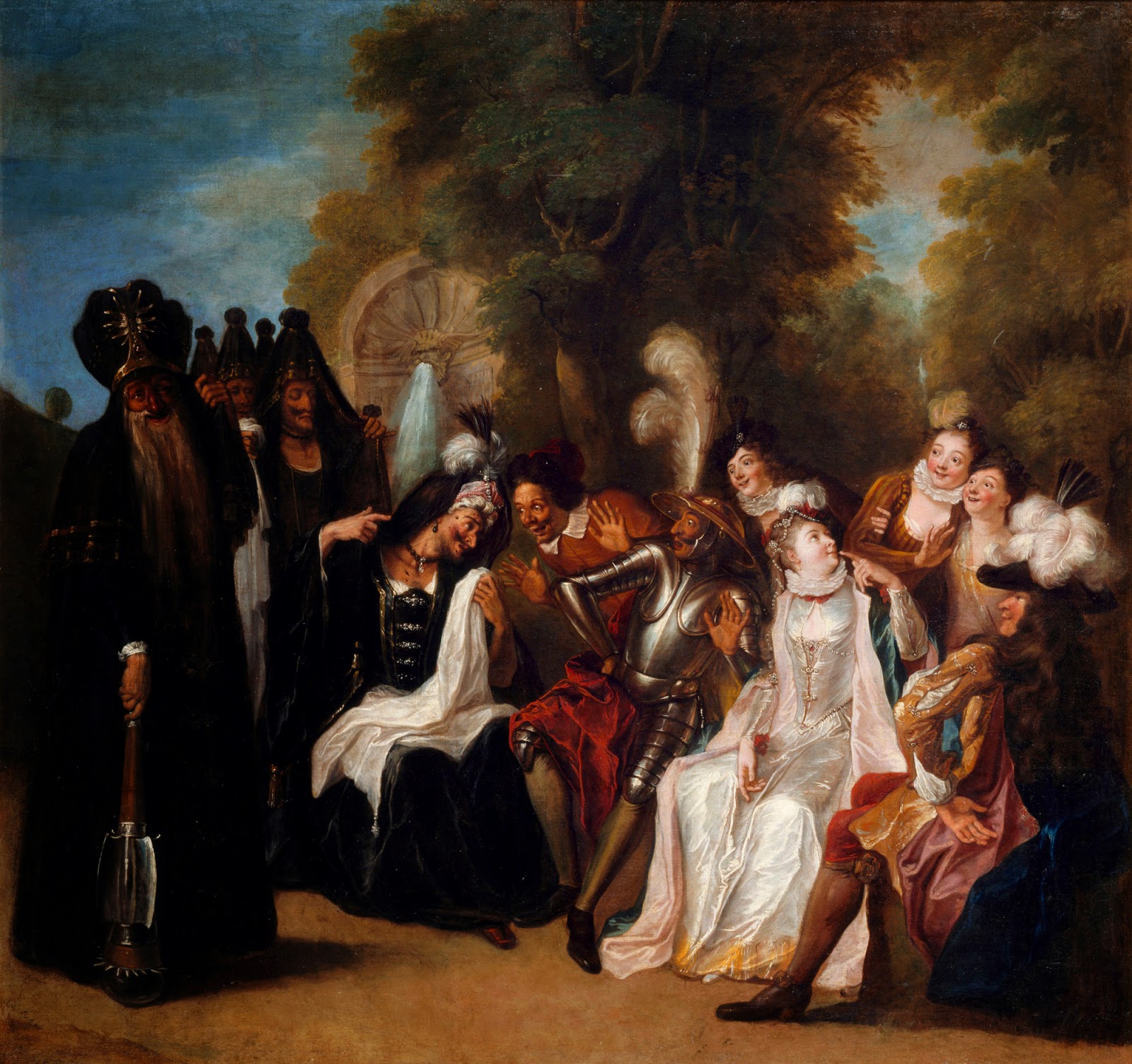 For the commission, Coypel created twenty-eight paintings, called cartoons, used as full-scale models for the weaving.  Five of these are in the show.  The cartoons gave weavers the size, figuration, settings and coloration of each tapestry's central scene.  Compared to the tapestry's total area, the Don Quixote scenes are quite small.  The painter had to create forceful imagery that would hold its own against their elaborate surrounds. Copley succeeded and the Don Quixote tapestries based on his designs became the most repeated Gobelins series of the eighteenth century.  Over 200 panels were woven.*

The exhibit's placement of tapestries next to cartoons highlight the different visual impact each medium makes.  The paintings appear flat with figures enacting in a shallow space while the woven scenes have more three-dimensionality and depth.   In fact, the Coypel models resemble stage sets with some scenes framed by theater-like curtains with characters looking directly out of the picture plane to an implied audience beyond.

By the time Coypel began to work on the Gobelins project, the errant-knight's tales had been transformed into many plays, operas and ballets.  The artist himself had written two plays with ballet about the knight.  Keeping this in mind, that his tapestry designs resemble theatrical scenarios is not surprising.  Such settings would have been recognizable to the public and, possibly, added to the series success. There is a certain comfort level looking at things one is acquainted with. 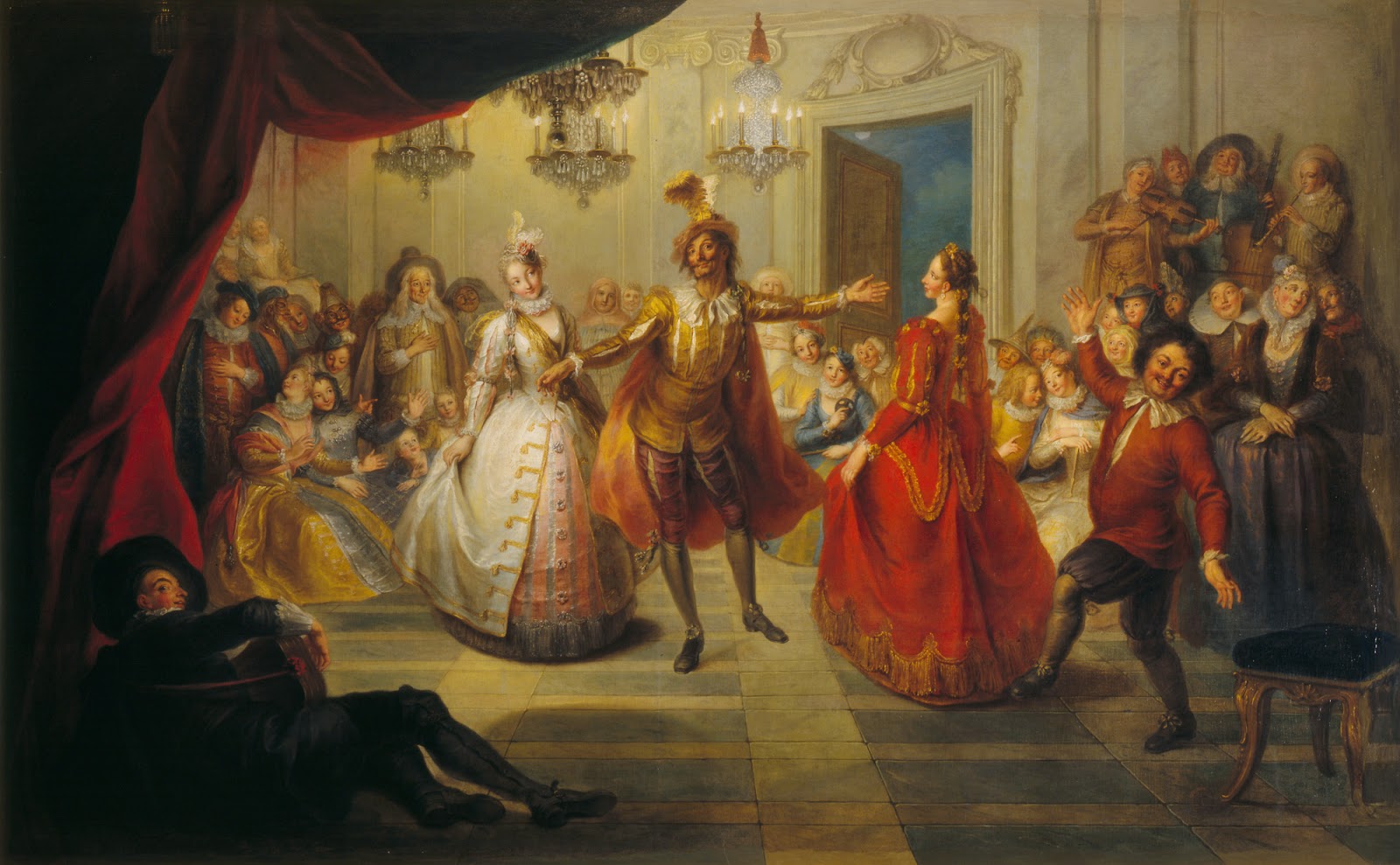 
The tapestry's decorative border, called an alentour, could be modified while the work's central image remained unchanged.  The variability gave the tapestry makers enormous flexibility.  Orders could accommodate a patron's wishes by changing the surrounds. The size could be made bigger or smaller to fit into a specific location; the style could evolve to reflect up-to-date taste; and, accessories could be amended.  Indeed, the borders were refashioned six times during the eighteenth century.  The golden yellow background of earlier tapestries, for example, was replaced by a crimson color in 1760 when the Gobelins Manufactory created this hue which simulated rose damask wall coverings.   The earlier works were filled with references to classical art in a light, delicate curvilinear Rococo manner.**  In contrast, the later Gobelins panels like those in the exhibit here have a strong sense of  weight, robustness and materiality.

With dazzling trompe-l'oeil effects, and an abundance of flowers, animals, birds and more, these tapestries practically burst off the wall. Their complex layering challenges perception -  distinguishing what comes before what both confounds and delights. 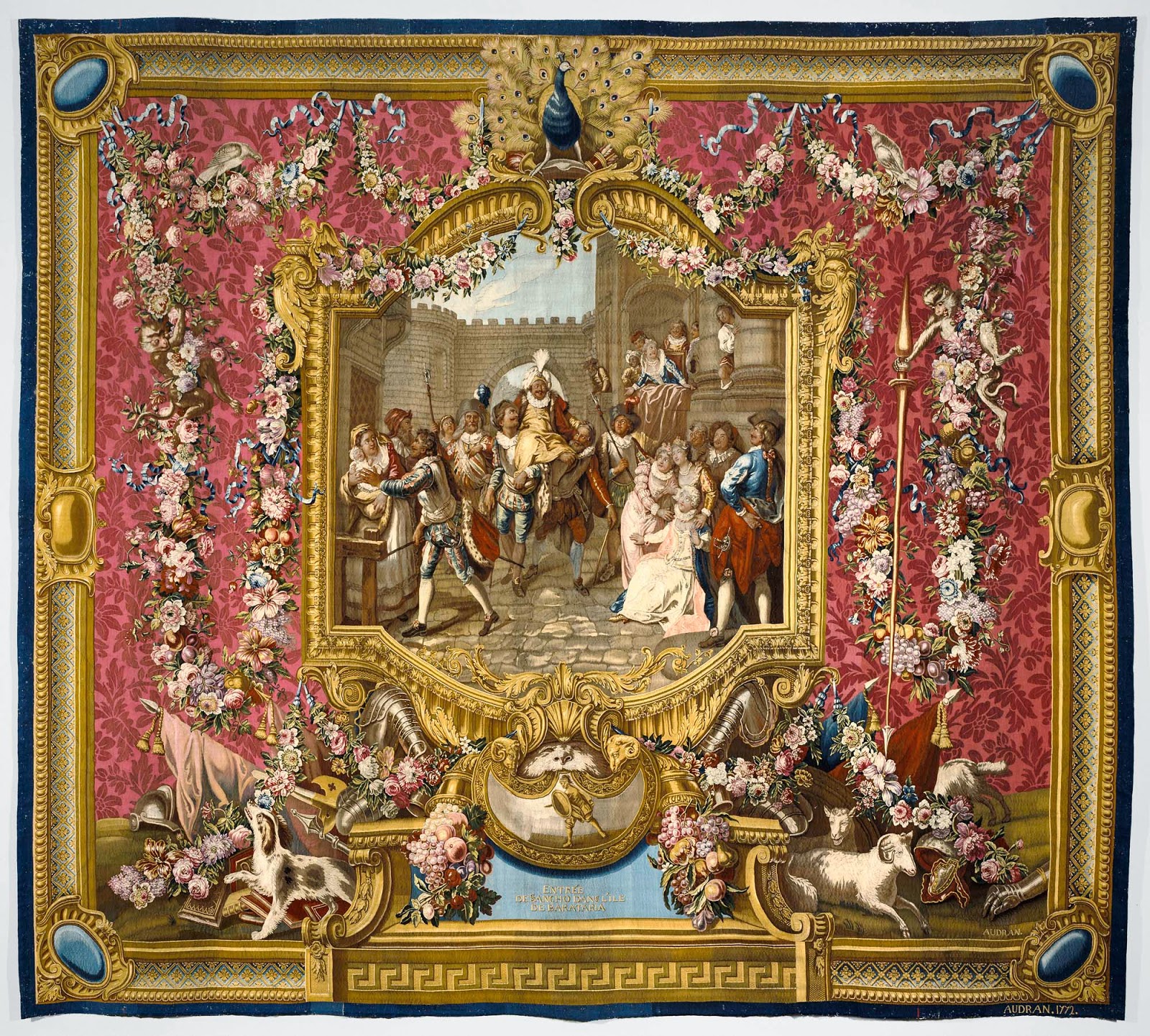 A word about technique:  Almost all the tapestries from the set were woven on what is called high-warp looms.***  In this method, the cartoon was hung behind the weavers and loom.  Weavers  reproduced what they saw in a mirror facing them which reflected the cartoon's image. The result was a woven scene which did not reverse the initial design.  The high-warp process was slower, more labor intensive and costlier, upward of two-thirds more, than low-warp weaving.  The procedure resulted in tapestries of very fine quality.  Most importantly, the full-scale model could be exactly copied.

What was produced was enormously expensive.  Tapestries were more costly than master paintings and other fine arts.  Only the very rich could afford them and as such, they were seen by few.  Yet Coypel's Don Quixote tapestry scenes came to dominate all eighteenth-century illustrations of the novel. 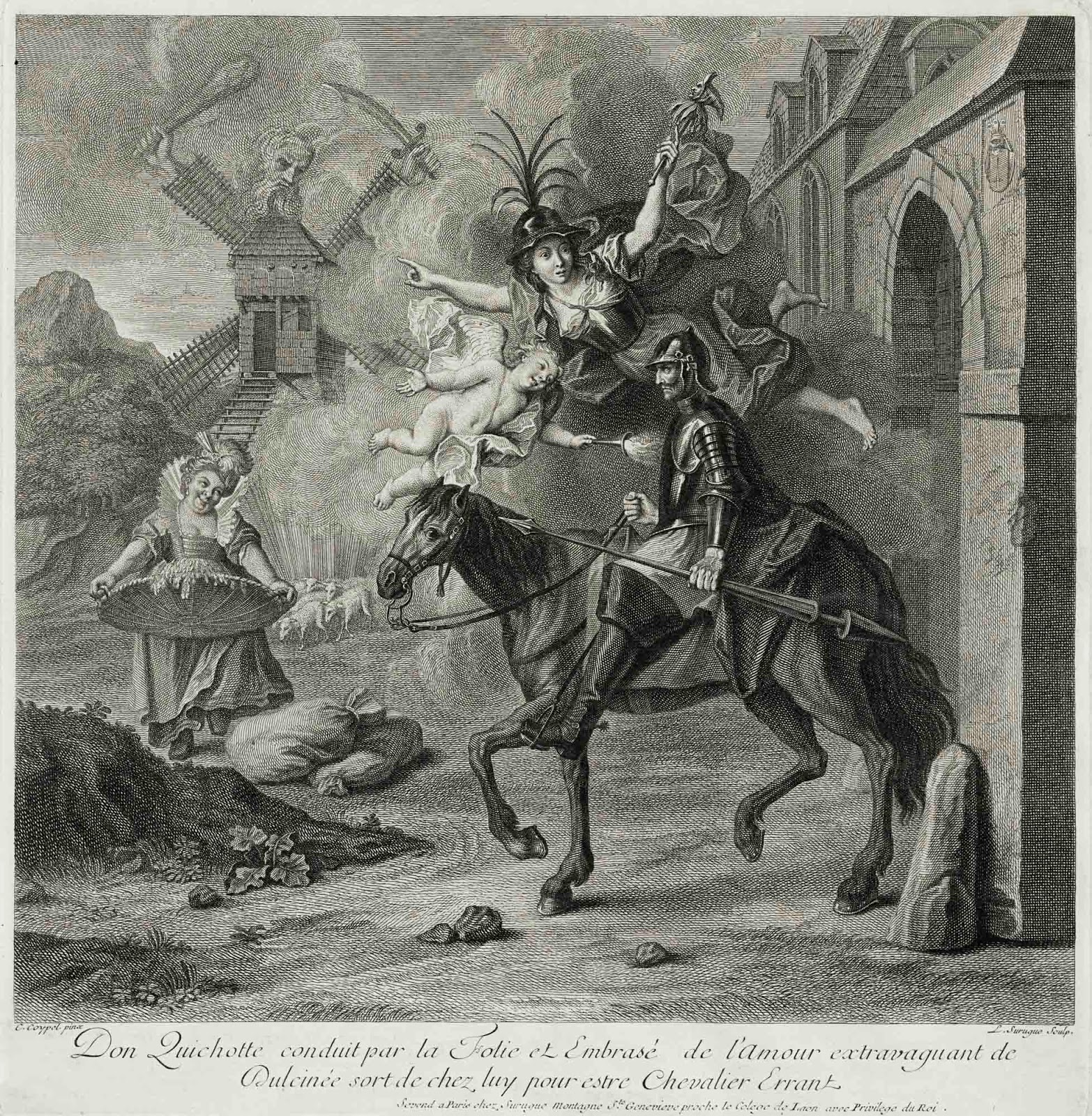 This came about through the circulation of prints, an affordable art form, available to a large audience.  For artists, prints, black-and-white engravings, were a source of income and a means to international fame.****  Between 1723 and 1734, Coypel had 25 of his 28 Don Quixote cartoons engraved by the best print makers in France. Thousands of prints based on Coypel's designs were sold. 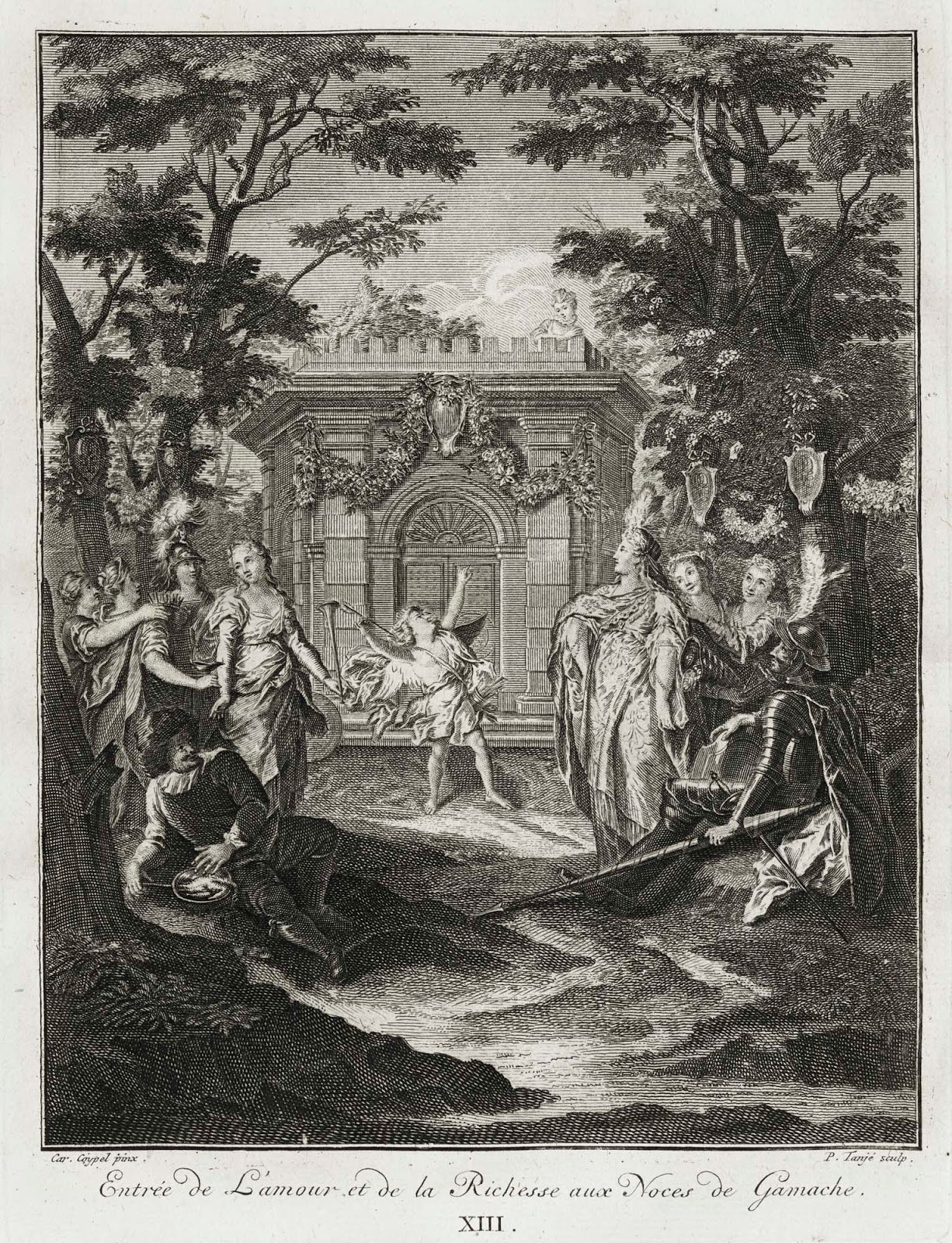 In reduced form, these prints were used to illustrate eighteenth-century editions of the Cervantes's novel.  Published not only in French but also in English and Dutch, book images were re-engravings of the original Coypel prints.  As such, we are dealing with original paintings transformed into prints by a particular engraver then transformed again into smaller plates by another engraver.  This is why the first printed sheets may reverse the original design but the book images based on the reversed designs would revert back to the original paintings's orientation.  Think about it. 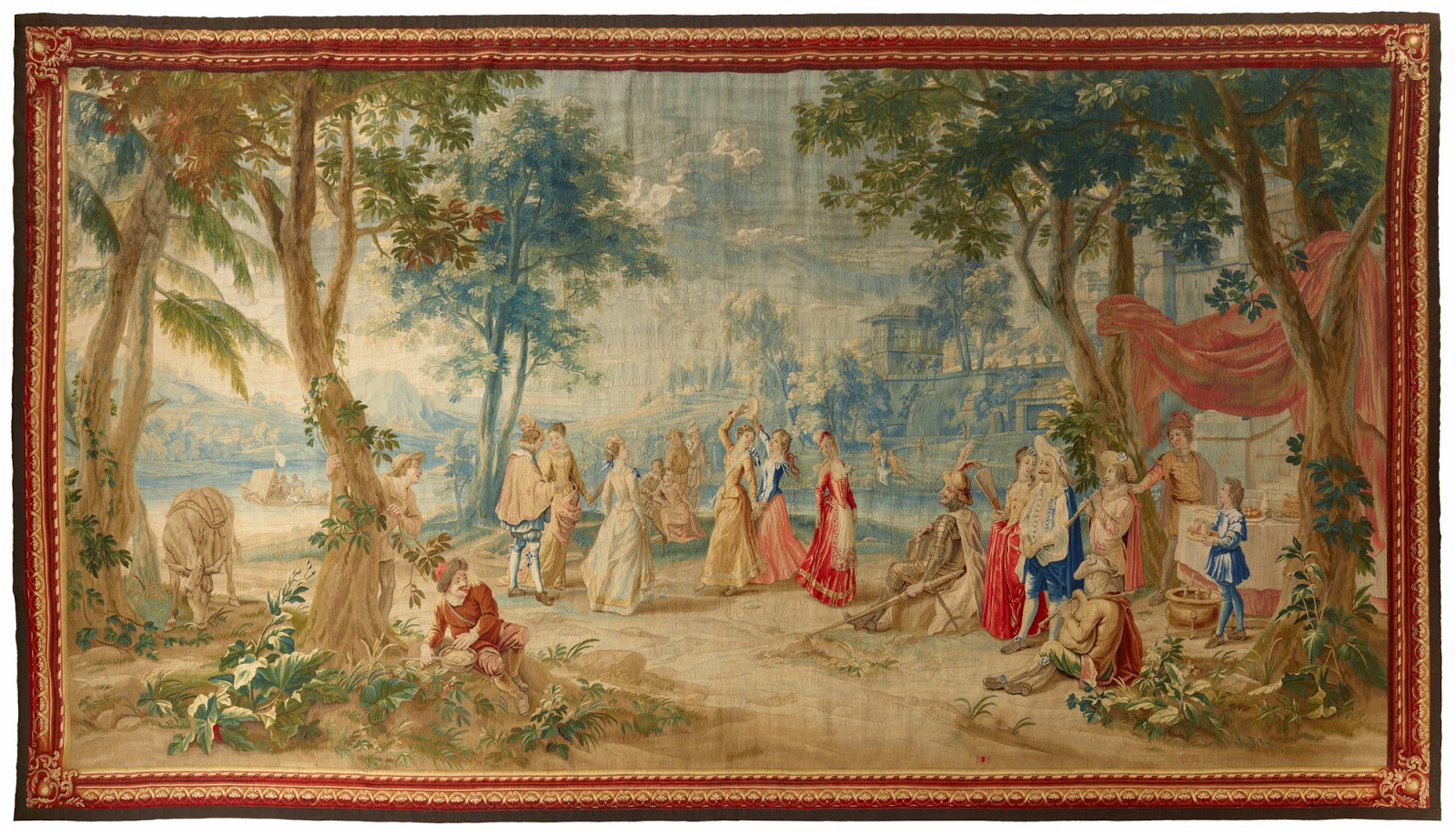 Coypel's Don Quixote designs would once again be transformed back into tapestries.  His engravings became a source for other woven works. Between 1730 - 45, the Brussel's tapestry workshop of Peter van den Hecke completed a series of eight Don Quixote panels. Six were derived from Coypel's designs. Two from the Brussel tapestry set belong to the Frick and are displayed in the museum's East Gallery along with the exhibit's eighteen prints and books.  The  Frick's works are rarely on view due to space constraints.  Their appearance adds to the specialness of this exceptional exhibition.

These tapestries are quite different from the Gobelins series.  Scenes are spread out across the whole woven surface.  Borders are simple:  an imitation of a carved and gilded frame. Background landscapes are relatively large and evoke the manner of seventeenth-century Dutch paintings.

The Flemish artist did not reproduce outright Coypel's designs. Figurations or elements of different Coypel prints were combined and used in a variety of scenes.  For example, in the Arrival of the Shepherdesses at the Wedding of Camacho, the central female dances and wedding guests derive from Coypel's scene of the same name but the seated figure of Don Quixote on the right and Sancho on the left are quotes from Coypel's The Entrance of Love and Treasure at the Wedding of Camacho.

The Van den Heckes tapestries were very much admired abroad. Even the French court acquired seven of the series including the two Frick panels.  This was at the same time the court was ordering Gobelins manufactured Don Quixote panels.  The French royalty seemed to have had a prodigious desire to acquire woven hangings. They wanted them, of course, to adorn their palatial residences as well as for impressive gifts to other royals and nobles.*****

With the the Frick's tapestries, the exhibit returns to its beginnings - from paintings, to tapestries, to engravings, to book illustrations and back again to tapestries.  Along the way, the wondrous tales of Cervantes's man from La Mancha are transmitted and transformed.

Visitors may judge for themselves how Coypel captured the essence of the errant-knight.  The exhibition catalogue includes the novel's stories corresponding to the artist's designs.  Copies are available in the galleries.

Make a visit to the Frick.


◆◆◆◆◆◆◆◆◆◆◆◆
*The Metropolitan Museum of Art's collection includes one of Coypel's Gobelins Don Quixote tapestry, The Memorable Judgement of Sancho Panza, 1752-54, wool and silk,  147 x 189 in. (373.4 x 480.1 cm), accession number: 52.215.  Currently, not on view.  Tapestry weavings were signficantly used as diplomatic gifts. The Metropolitan Museum of Art's Coypel Goebelin Don Quixote tapestry has been identified as part of an expensive Gobelins set given to the Grand Chancellor of Russia during the Seven Years' War in the hope of encouraging Russia to side with the French.  The Chancellor also received a large some of money (250,000 livres) called a "loan."  His Gobelins pieces had included four hangings, six smaller panels, sofa and armchairs and screens.  The total payment to the Gobelins Manufactury was 31,810 livres which was about a third what the material cost.  This was just a book keeping payment from one French royal department to another.  The king could pay what he wanted and often owed workers their salaries.

**The alentour of the Metropolitan Museum of Art's Coypel Goebelin Don Quixote tapestry has a golden yellow background.  See below for a sample comparison of two border fashions: 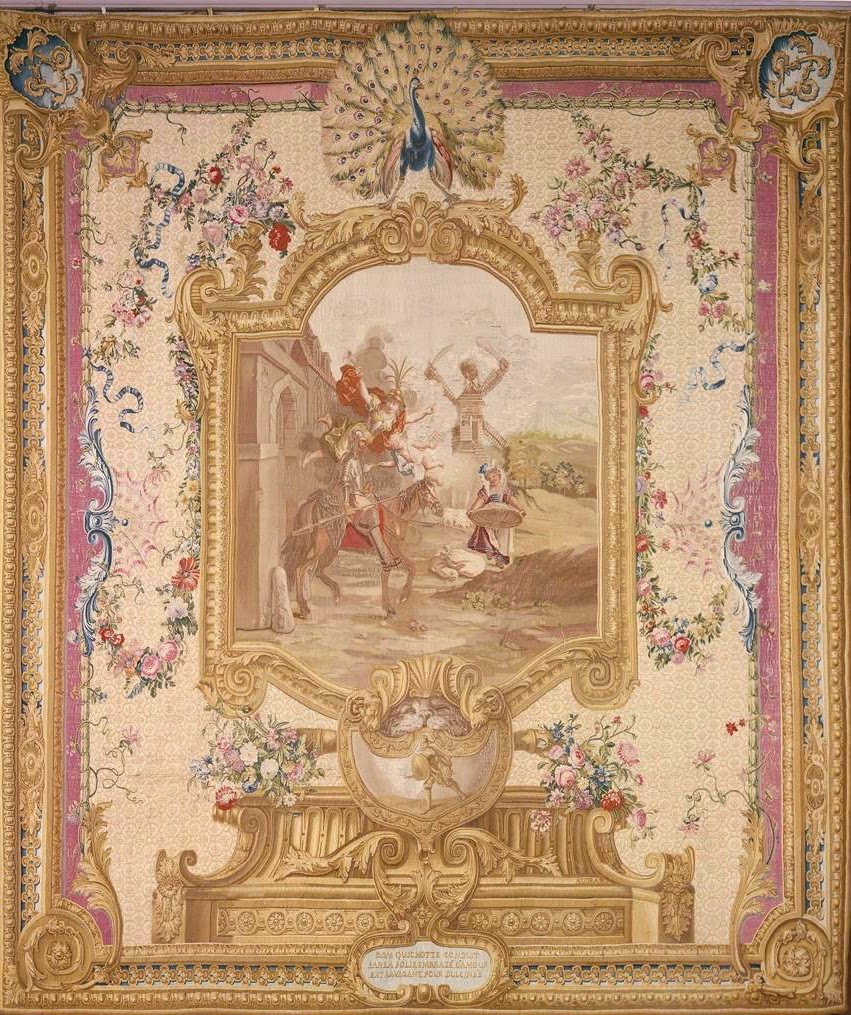 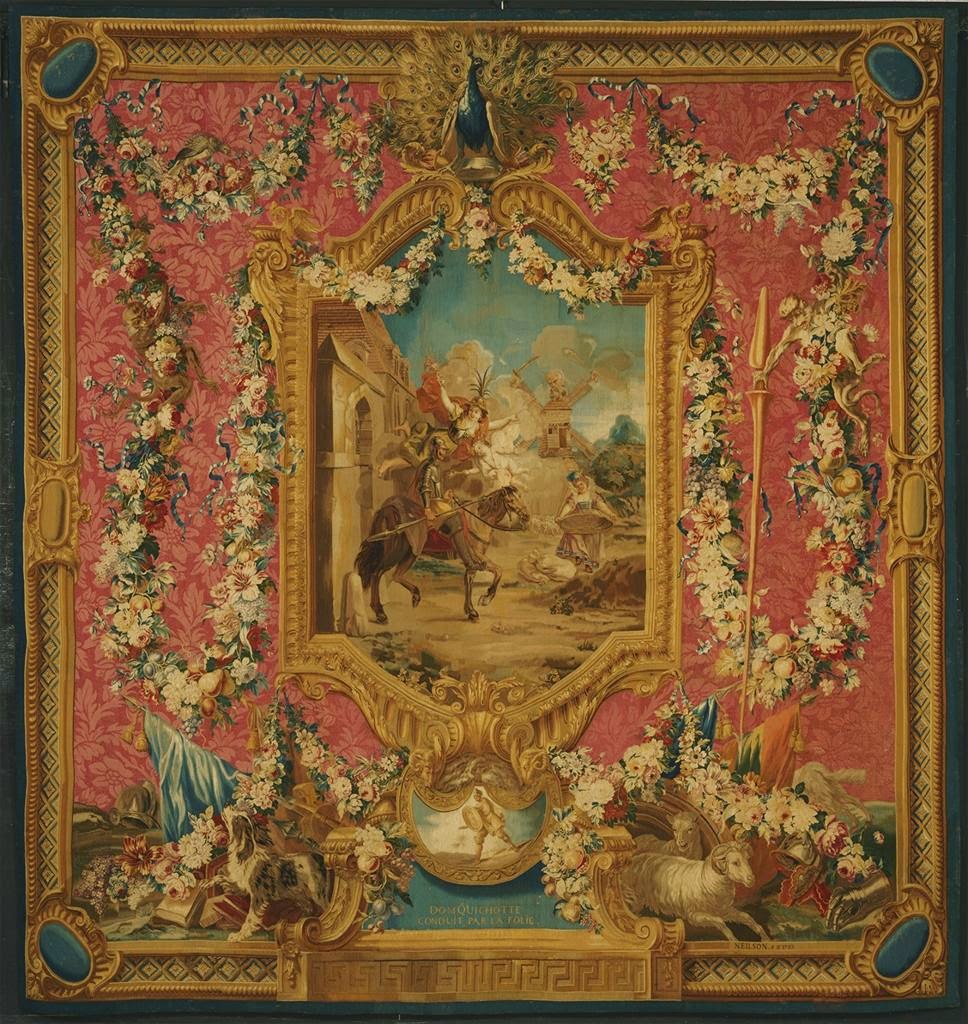 ***With high-warp looms, weavers could easily see how the work was progressing by stepping in front of the loom.  Weavers using low-warp looms could not see the front view of the weaving unless they went under the loom.  Furthermore, the cartoons were reproduced in reverse. By the second half of the eighteenth-century, a mechanism was invented to improve the ability of low-warp weavers to view their work in progress. In addition, a new procedure ensured the tapestry scene would be identical to the cartoon.  This greatly enhanced the quality of low-warp woven work.  The Don Quixote tapestries utilized the low-warp looms only in their seventh weaving.

****The revenue from print sales was important to artists.  Coypel's compensation for the tapestry paintings had not amounted to much considering what other artists involved in the tapestry design earned.  Coypel was paid 200 livres for each of the first set's cartoons while Jean-Baptiste Belin de Fontenay, one of the border designers, received 1100.  Lowly but highly skilled weavers earned, of course, far less - from 7 to 15 livres a week.

*****Given the state of the French royal finances in the mid-eighteenth century, the Gobelins Manufactury welcomed private outside orders.  After the end of the Seven Year's War in 1763, the English swarmed to France.  The sixth Earl of Coventry was among the English visitors.  He had come with a purpose to buy furniture, tapestries and other wares for his country seat Croome Court in Worcestershire, England.  The Gobelin tapestries decorating the walls and the furniture of the Metropolitan Museum of Art's Croome Court room are the outcome of the Earl's visit.  A further note:  when the Earl of Coventry visited the Gobelins factory, he may very well have seen some Don Quixote tapestries in various stages of completion on the looms.  These would have had the new crimson background of the surrounds and could have been the inspiration for the Croome Court color scheme.  The Duke of Richmond had already purchased a Don Quixote panel with the crimson ground the same year as the Earl's French visit.  The influence is conjecture but possible.

Don Quixote Night
Friday, May 1, 6:00 to 9:00 p.m.
A special free program of talks, performances, readings and after-hours viewing of
Coypel’s Don Quixote Tapestries: Illustrating a Spanish Novel in Eighteenth-Century France
Visitors will be admitted on a first-come, first-served basis.
Reservations not accepted.

Posted by ArtWithHillary at 12:05 PM