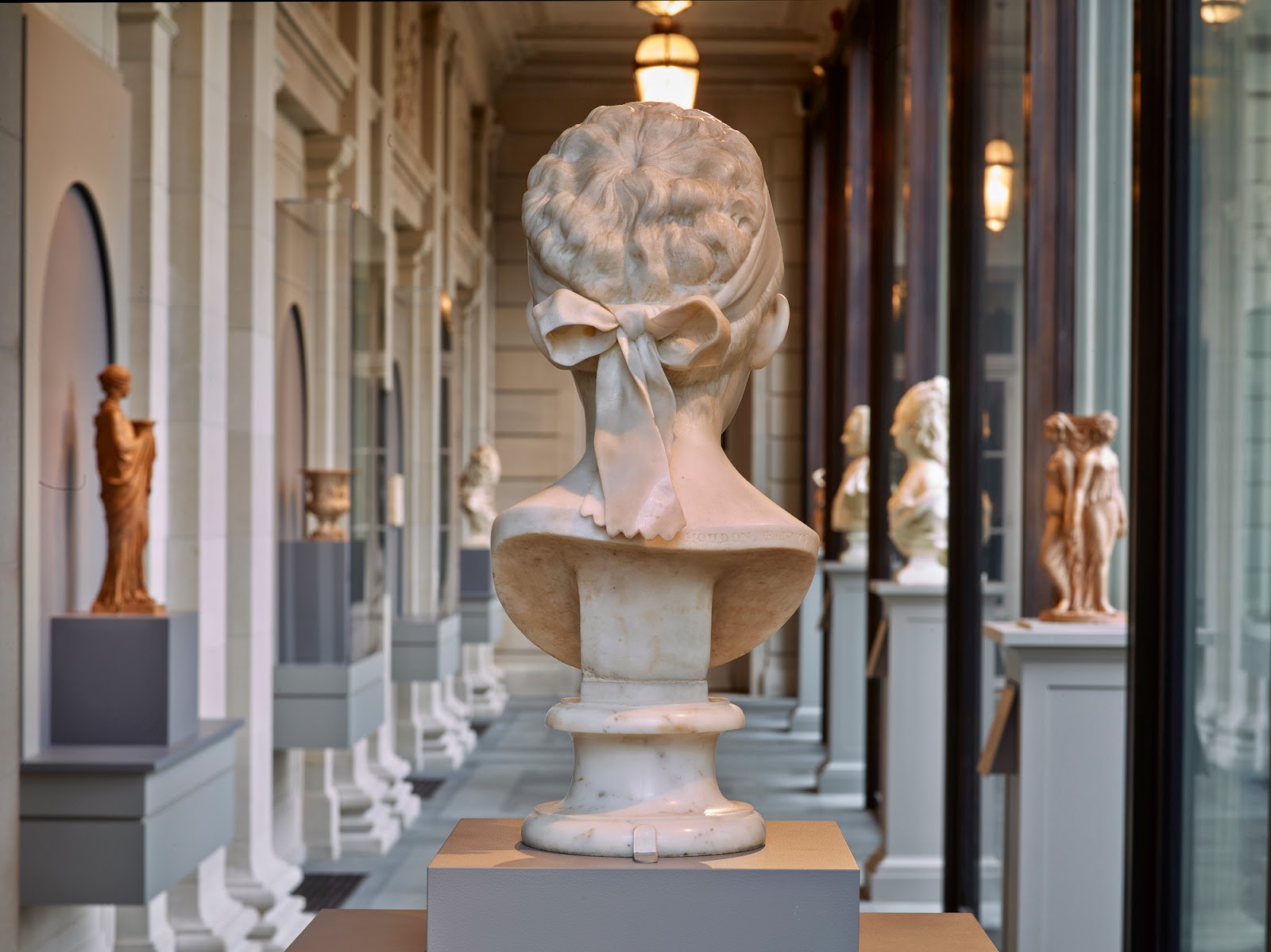 Installation view  of
Enlightenment and Beauty:
Sculptures by Houdon and Clodion
in the Frick Collection's Portico Gallery
with back view of
Jean-Antoine Houdon (1741–1828),
Young Lise in the Guise of Innocence, 1775,
marble, 18 1/8 in. (46 cm),
Private Collection,
The Frick Collection, New York
Photo: Michael Bodycomb

Twelve eighteenth-century sculptures are presently on view in the Frick Collection's Portico Gallery.  Half are in marble; the other half are terracottas.  Six are by Jean-Antoine Houdon (1741-1828) and six are by Claude Michel called Clodion (1738-1814).    These illuminating works make up the aptly entitled exhibition, Enlightenment and Beauty: Sculptures by Houdon and Clodion. 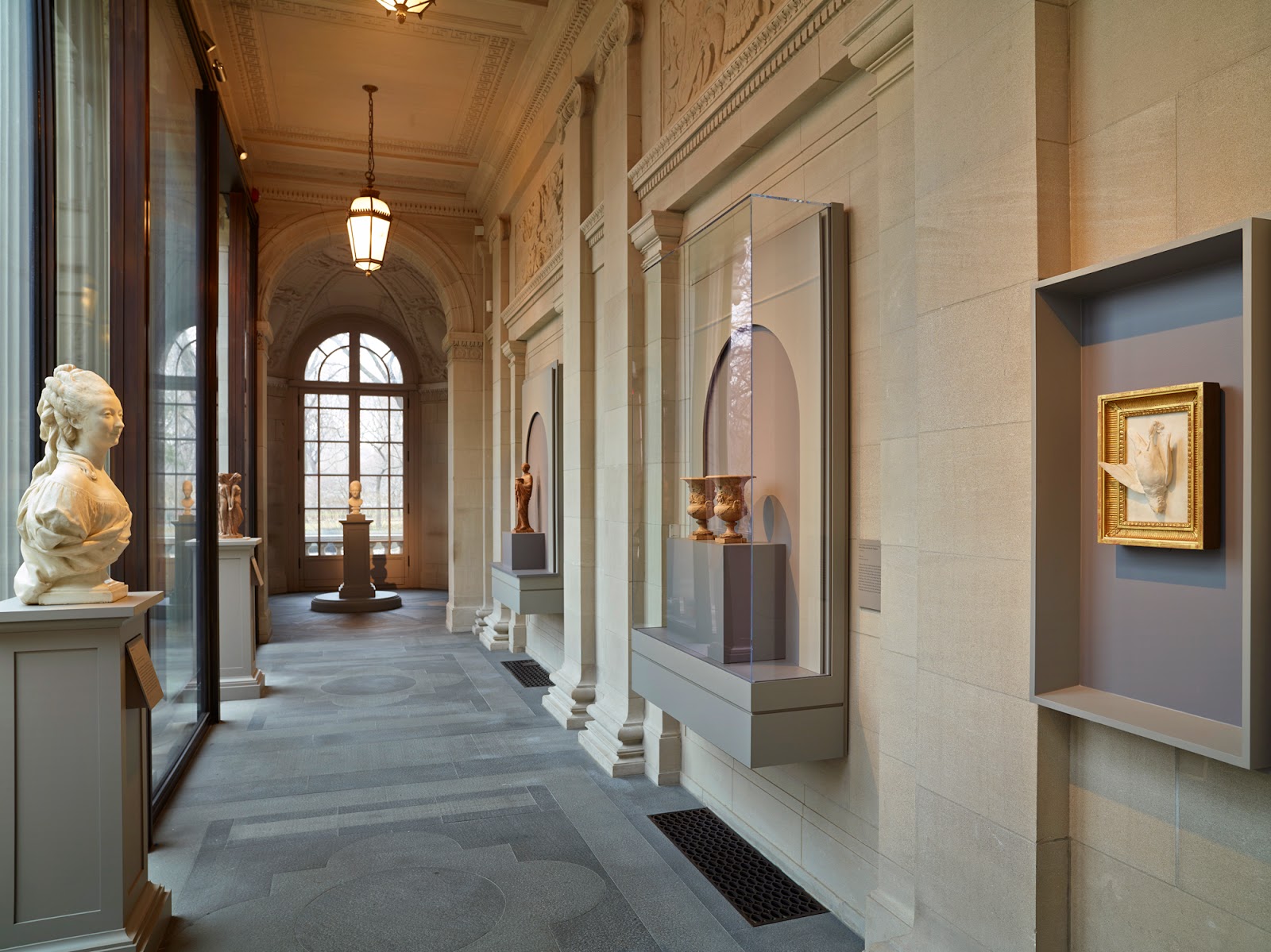 The Portico Gallery was inaugurated in 2011.  Created out of an open air loggia original to the mansion, the gallery was designed specifically to showcase decorative arts and sculpture. The space has a south-western orientation. Large glass panels on its south side let in abundant natural light.  Although plentiful light may be a problem for paintings, it is less so for sculpture and ceramics.  In the case of sculptures, diurnal light changes call attention to different aspects of works - certain features may be overlooked under different conditions. This is particularly true for the current exhibition - the third to take place in the Portico space.  Intense light discloses the transparency of thinly carved marble; shadiness brings out a sculpture's spatial quality and finely carved details.  Low light shows up surface patterns that brightness may obscure. Repeat visits reward viewers.

The show's year-long residency necessitates modifications. Notable pieces will rotate since private lenders did not want their artworks away for so long.  At present, only four sculptures in the Portico Gallery belong to the Frick; eight are on loan*.  This is a rare opportunity to study works by two sculptors intimately and side by side.

Houdon and Clodion were contemporaries who were students together in Paris and Rome. In Paris, both studied at the French Royal Academy of Painting and Sculpture.  Clodion won the prestigious Prix de Rome in 1759; Houdon was so honored in 1761.  The prize was the result of an annual competition established by the French Royal Academy in the seventeenth century. Winners were given scholarships to a three-year program at the École des Élèves Protégés, an elite art school within the French Academy which was established to prepare Prix de Rome awardees for their three years of study at the French Academy in Rome. Houdon's and Clodion's attendance at the Paris art school overlapped as did their residencies in Rome where they had adjacent studios. Schooled in Greek and Roman culture and art with exposure to extensive collections of antiquities, the artists's education diverged on some salient points. 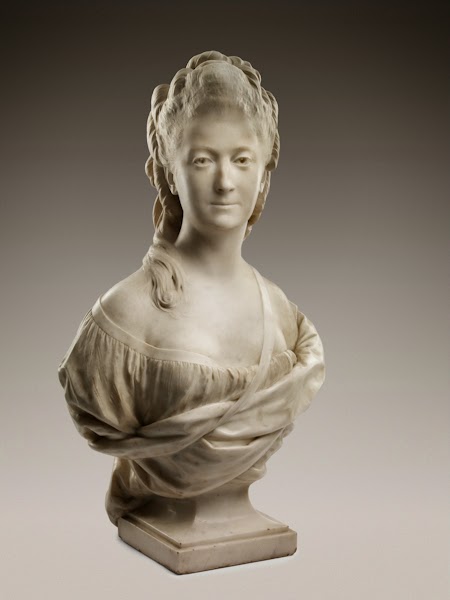 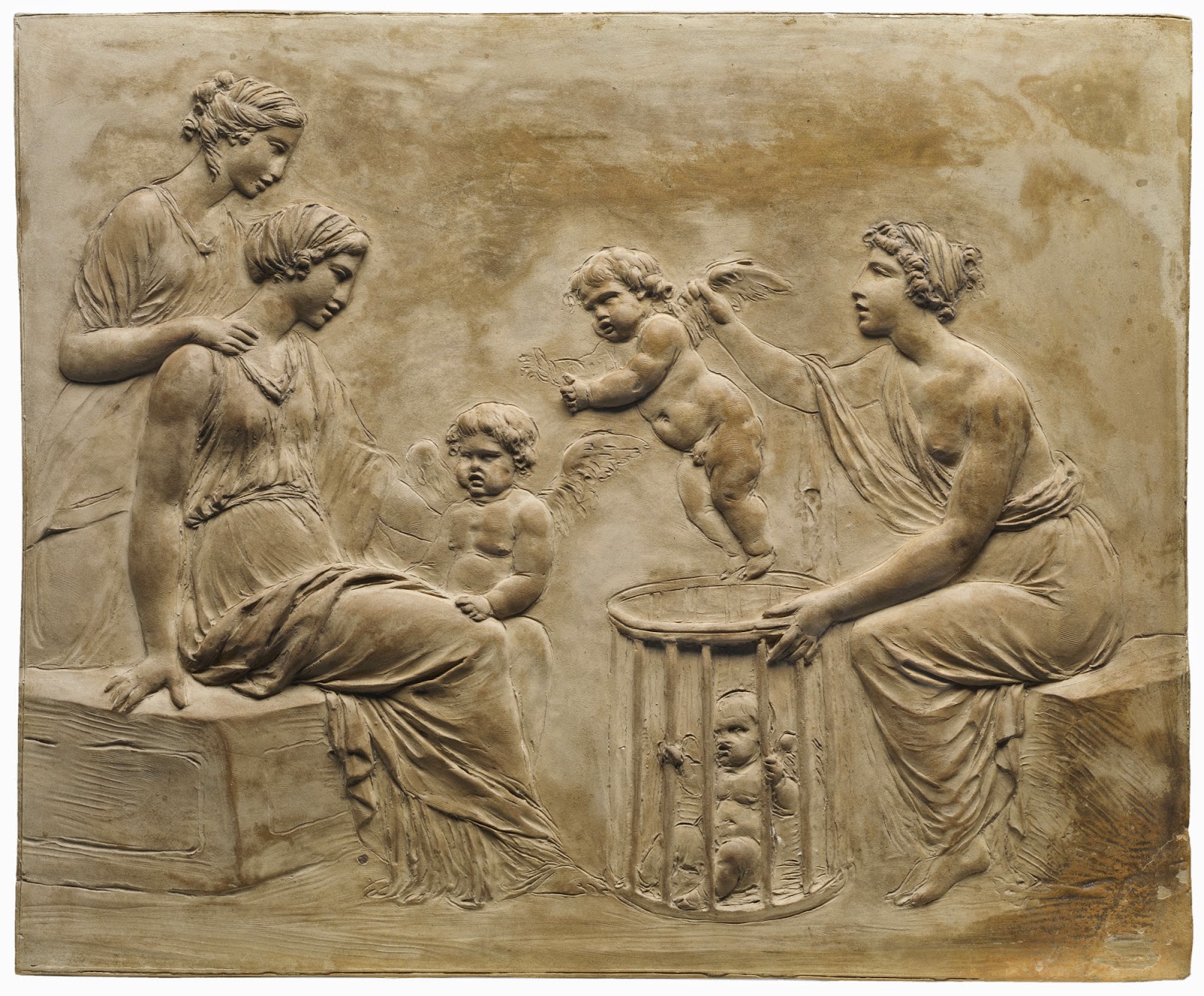 The artists were part of the Enlightenment Age and, as such, were surrounded by the zeitgeist of reason, individualism and progress through scientific methods. Although they both have been described as neoclassical or neo-baroque with Clodion also labeled as rococo, their work differed markedly.  To generalize (with much needed modifications), Houdon's art appeals prominentlly to reason, "sense" while sensuousness predominates Clodion's creations.  Viewing Houdon's art prompts the question, "How did he do it?"  Clodion's sculptures elicit the desire to touch and ask, "What is it about?" 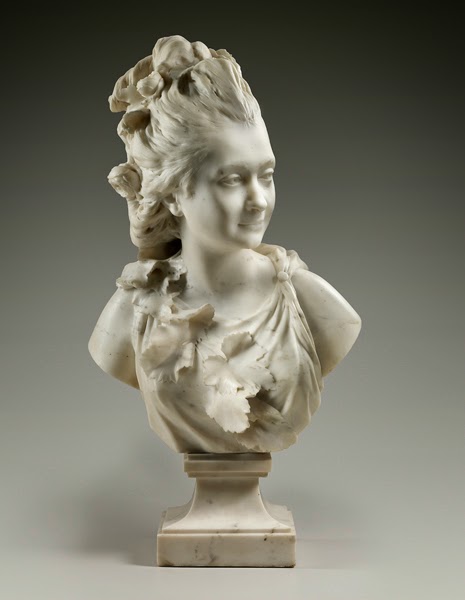 Houdon became renown for his portrait sculptures.  His technical proficiency rendered likenesses with astounding veracity.   Look at his Countess of Cayla with her mussed hair flying out behind her and sideward gaze. Although only a bust portrait, Houdon creates a sense of motion as if the Countess has just turned her head while moving quickly forward. 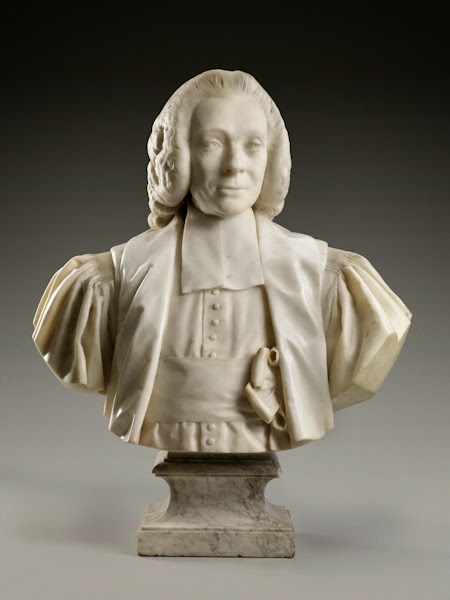 Even the artist's more subdued works convey a feeling of life - breath. Armand-Thomas Hue, Marquis de Miromesnil appears as a dignified magistrate defined by his facial characteristics as well as his costume of office.  The carving is spectacular - marble turns into cloth.  Note the well-formed wig, the outer robe's heaviness, the texture of the cossack with its delicate rounded buttons, and the taut sash along with its half hidden, multi-looped, large bow.

Looking up and down the Portico Gallery,  the Houdon's handling of hair and ribbon-like materials amazes. 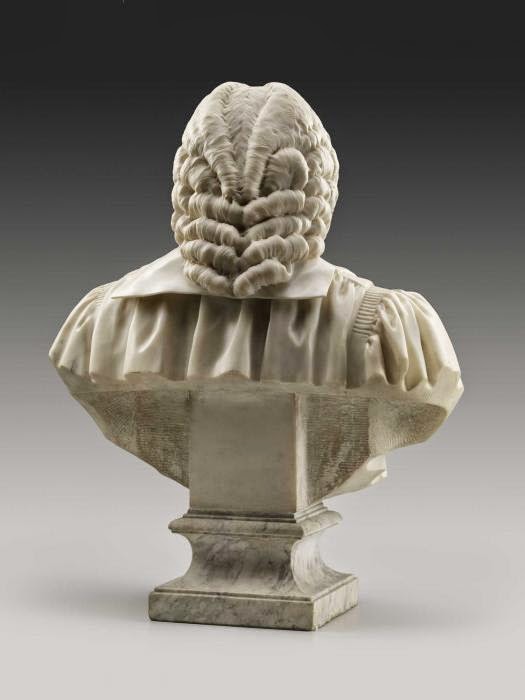 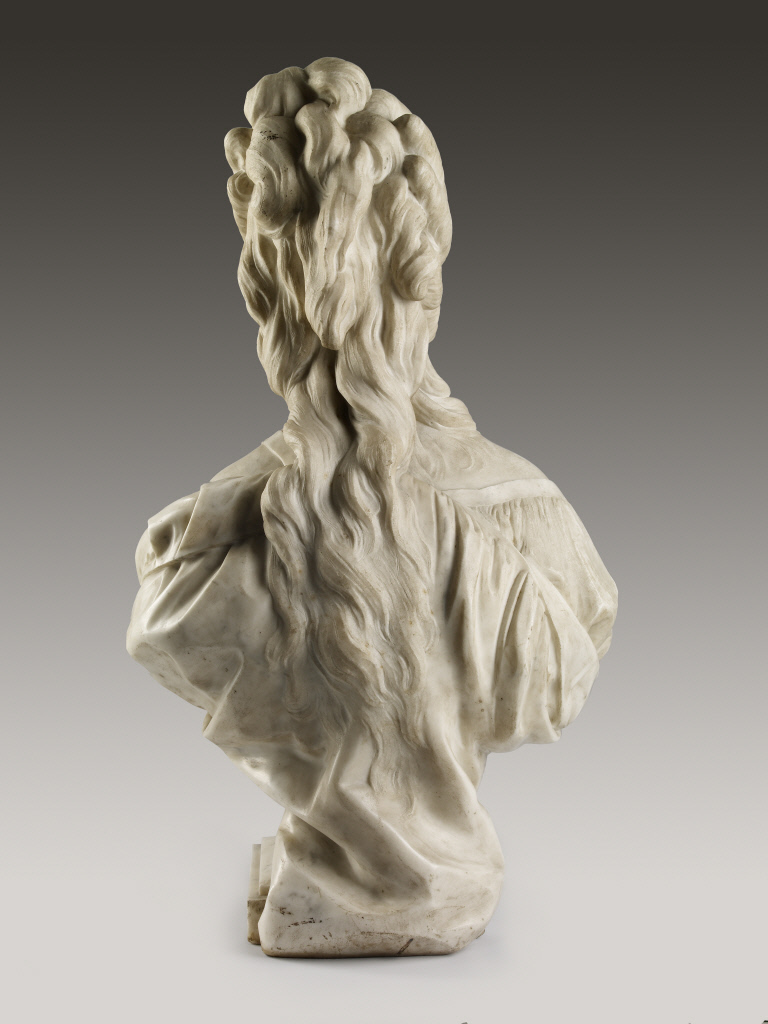 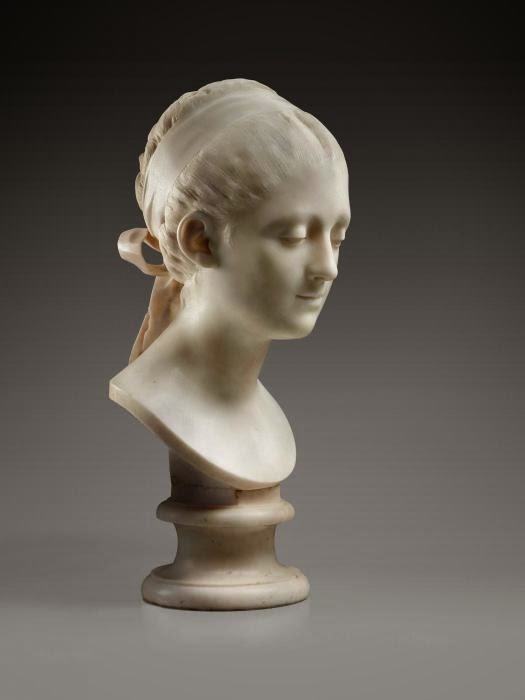 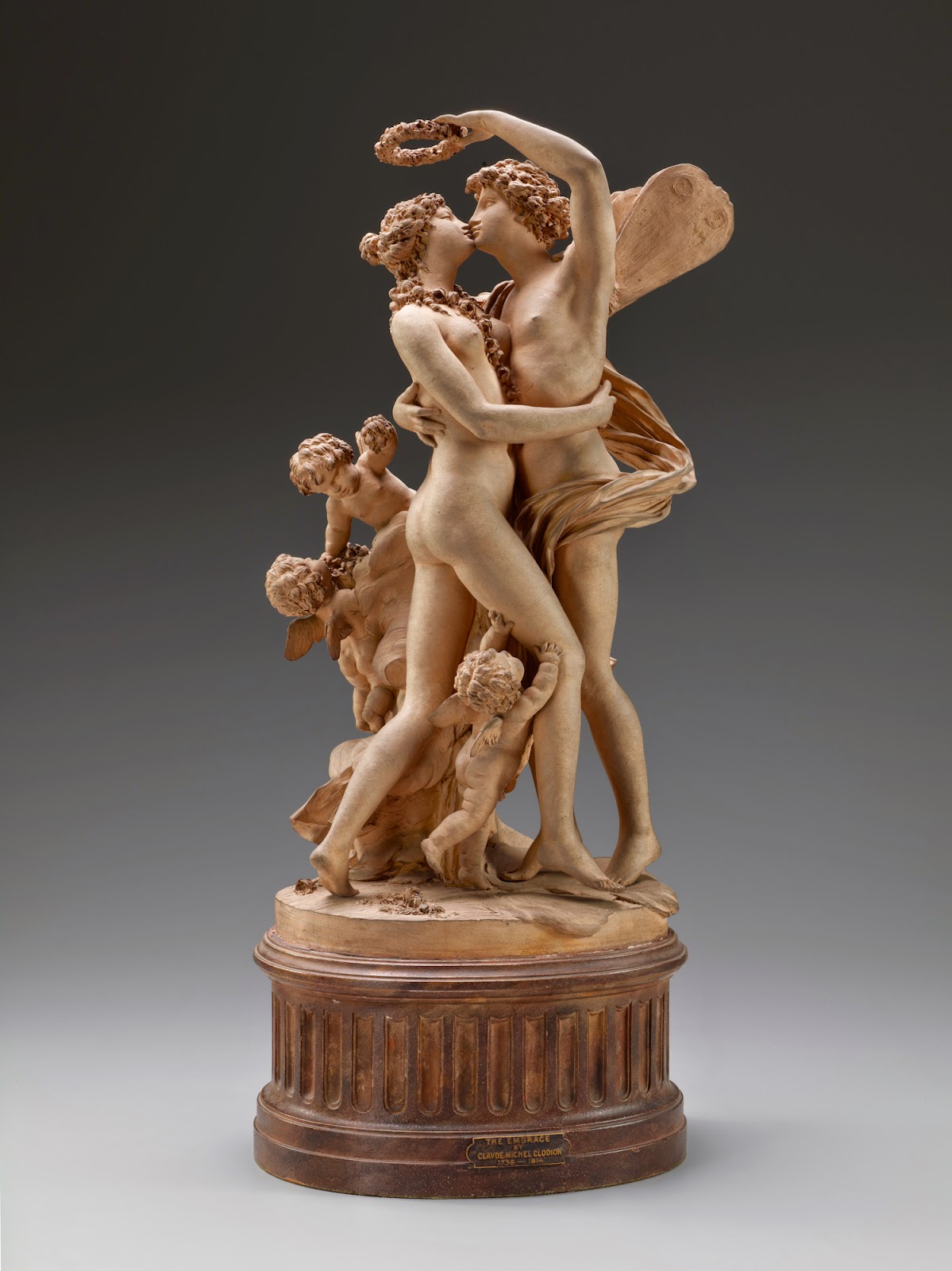 
Specializing in small-scale, highly finished terra-cotta statuettes and reliefs, Clodion imbued his compositions with a liveliness and more than a touch of eroticism.  He excelled in the narrative, translating the antique into his own modern vision. 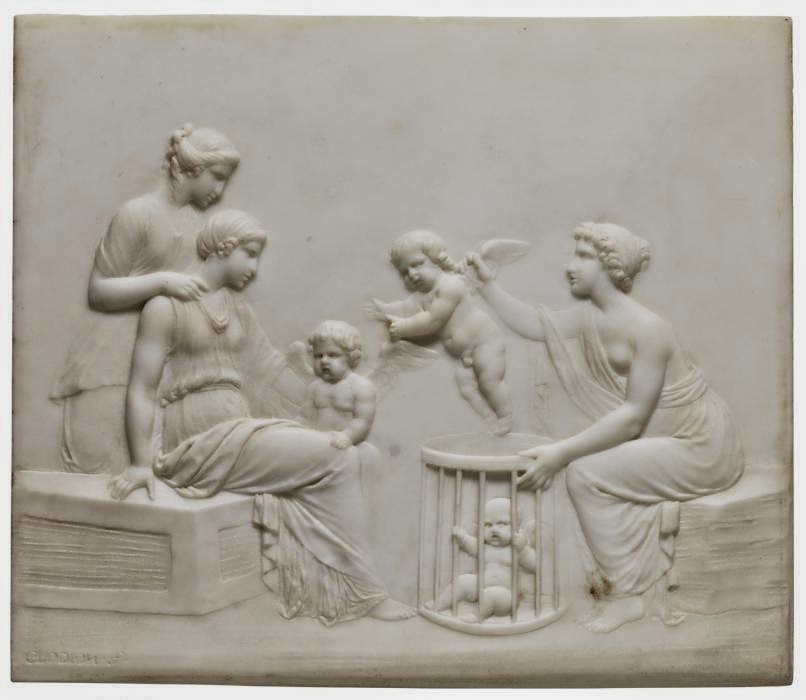 His The Cupid Seller (La marchande d’amours) relief, seen here in terra-cotta and marble, was based on a print of an ancient wall painting unearthed in the ancient Roman town of Herculaneum in the late 1750s.  The scene depicts a love or cupid vendor holding up a cupid for sale to a buyer accompanied by her attendant.  A cupid standing near the prospective buyer and another caged one indicate the different types of love available.  It is a playful, amusing scene which Clodion renders with composed gravity.  These are earlier works by Clodion. The terra-cotta was most likely done first. The composition then repeated at the request of a client in the more expensive marble.  They illustrate Clodion's proficiency in both mediums. 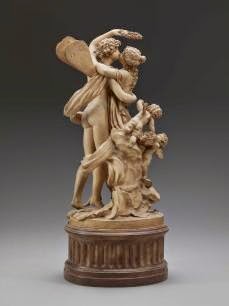 The sculptor's interpretation of the Zephyrus and Flora myth represents the god of the west wind taking hold of the goddess of flowers with his right arm while crowning her with a wreath of roses with his left. 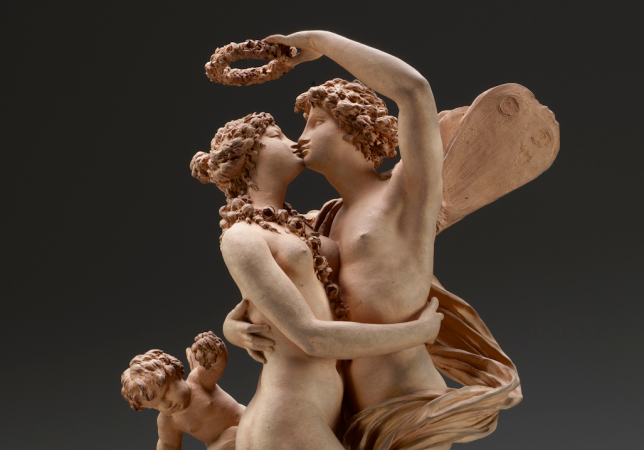 Body to body, lips almost touching, the two lovers look into each others eyes. Three putti enhance the scene.  One winged child pushes Flora's left leg closer to Zephyrus as if hurrying their union.  Another holds up a basket of flowers which a third reaches into it with one hand while dropping flowers near the goddess with the other.

The artist's free-standing works with their swirling or circular configuration invite viewing in the round. 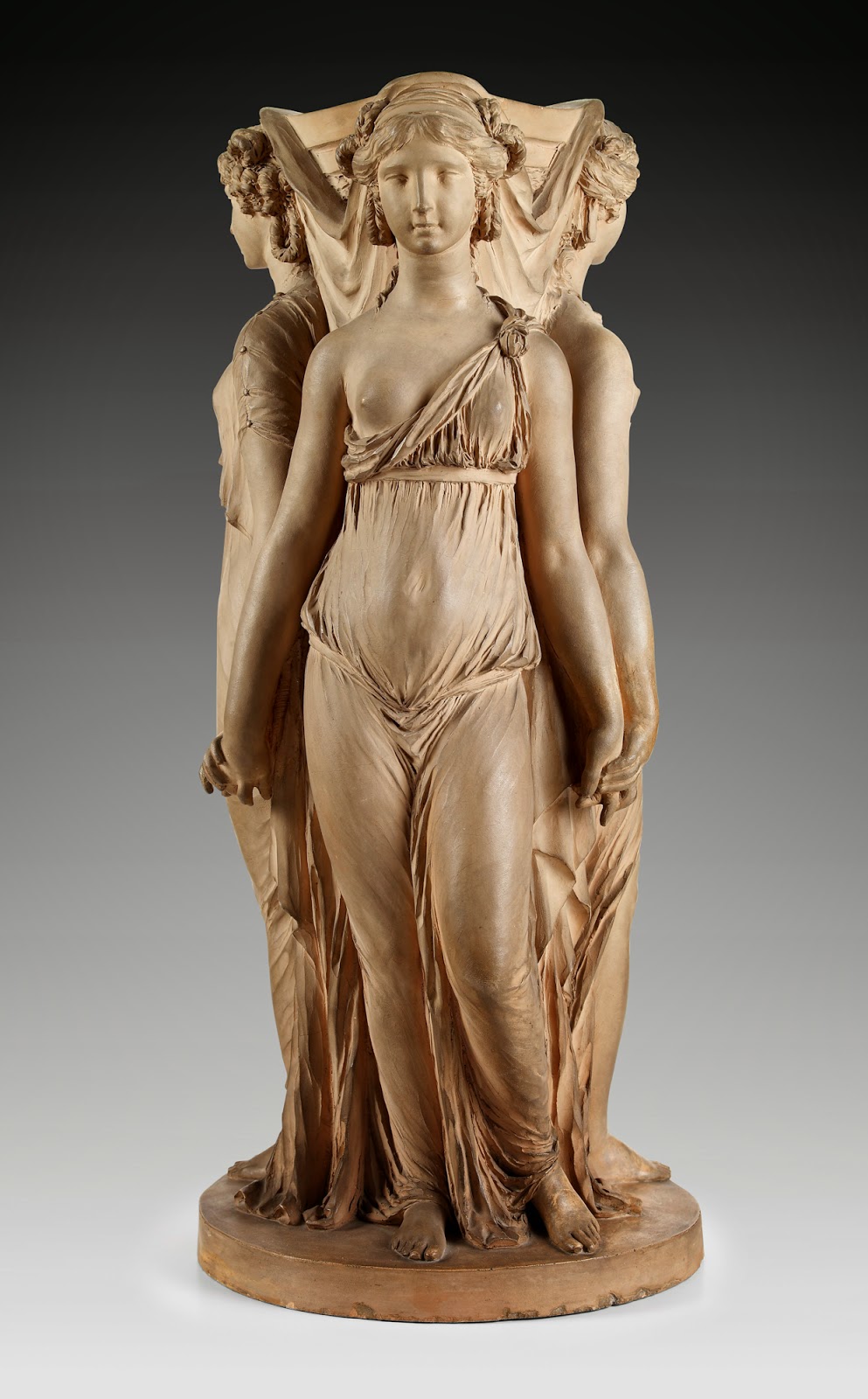 Although Clodion's Three Graces was intended to provide a basin support, the piece needs no function.  The goddesses are sensual beauties.  They hold hands around a central column. Their graceful bodies unhidden by clinging cloth.  Each is distinguished by subtle changes in dress, hairstyle and pose.   Positions and decorative drapery impart a gentle rhythm, enlivening the architectonic pillar-like composition.  It is a sculpture that charms as do others in this beautiful show.**  Go see for yourself.

*Jean-Antoine Houdon's Young Lise in the Guise of Innocence from a private collection is due to leave the show in June.  Confession: this viewer took a flashlight to Lise's thinly carved back bow.  When the flash was on, the marble became translucent.
**The Dance of Time:  Three Nymphs Supporting a Clock, 1788, terra-cotta, gilt brass, and glass, by Clodion and Jean-Baptiste Lepaute (1727-1802) and Jean-Antoine Houdon's small, tinted plaster of Diana, before 1793 are on view in the Frick Collection's Fragonard Room. These works beg to be looked at from every angle.  Alas, the Clodion rests on the room's eighteenth-century white marble chimneypiece.  Although set before a mirror, the back of the piece cannot be seen clearly.  The rear view of Houdon's Diana is also blocked. The goddess is placed on an eighteenth-century commode against the room's south wall.   Fortunately, the two pieces will be installed in the Portico Gallery during the run of the show: The Dance of Time: Three Nymphs Supporting a Clock, July through April 2015 and Diana, October through April 2015.